The Arlington House in Arlington National Cemetery, around 1900. Image courtesy of the Library of Congress, Detroit Publishing Company Collection. 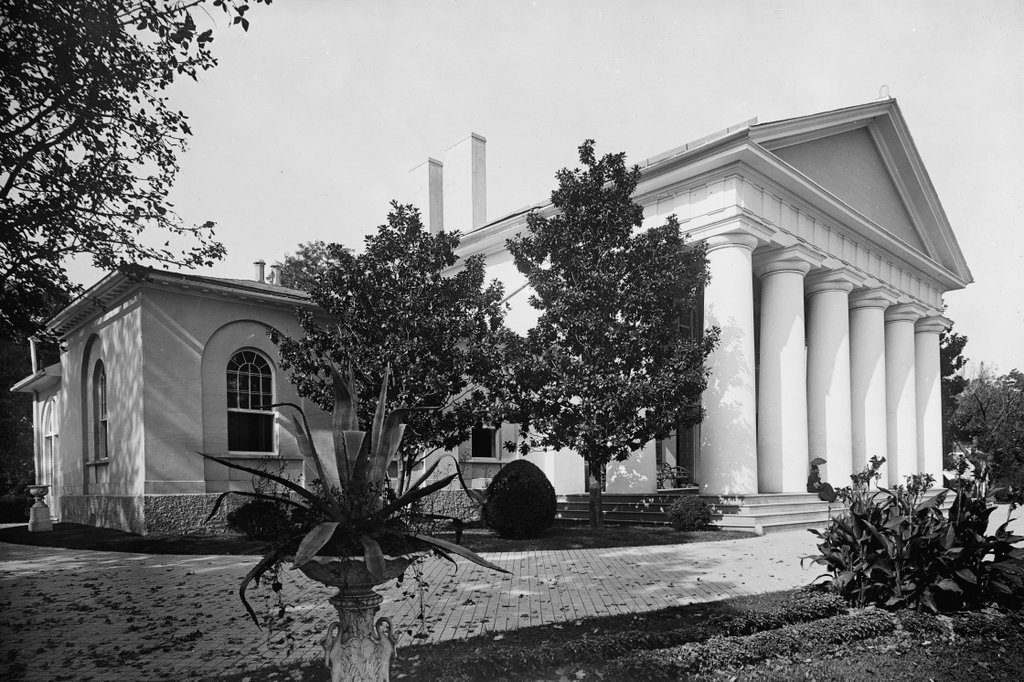 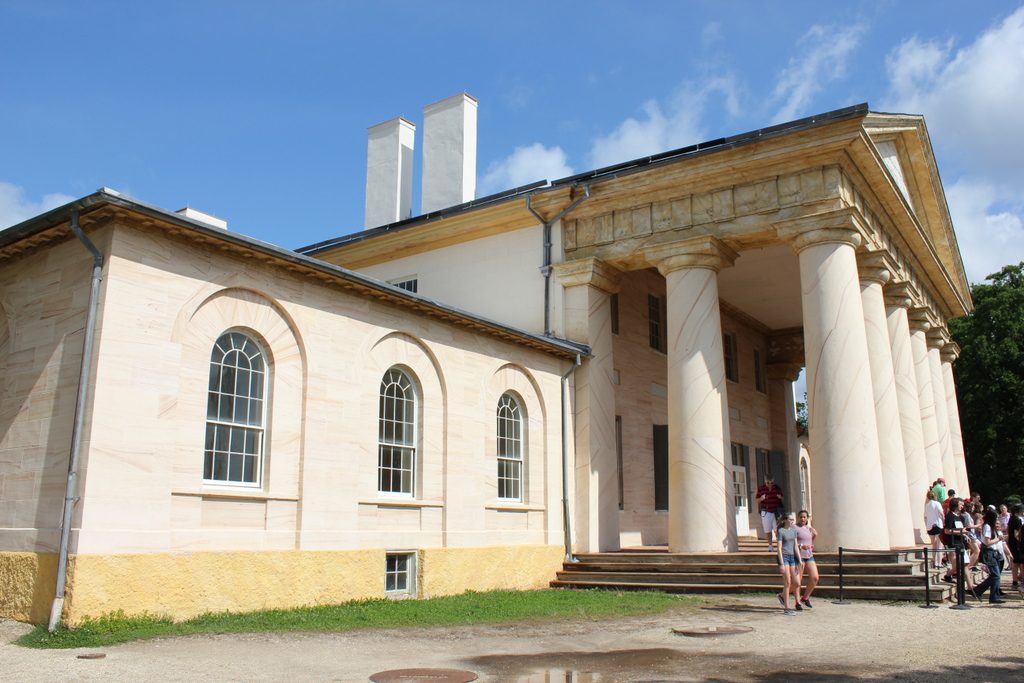 Among his father’s land holdings was an 1,100-acre estate on the Potomac River, overlooking the newly-established national capital of Washington. He named the property Arlington, and soon began construction on a mansion, which would become known as Arlington House. For the design, he hired George Hadfield, a noted architect who was responsible for several important buildings in Washington. The exterior of the house featured a very early example of Greek Revival architecture, with its most distinctive feature being the eight large columns here on the front portico. Although it appears to be built of sandstone and marble, the exterior is actually stucco-covered brick, which was intended to give it the appearance of stone.

The War of 1812 delayed construction of the house, but it was completed in 1818. Custis and his wife, Mary Lee Fitzhugh Custis, would go on to live here for the rest of their lives, until her death in 1853 and his in 1857. They had four children, although only one, Mary Anna Randolph Curtis, lived to adulthood. In 1831, at the age of 23, she married 24-year-old army officer Robert E. Lee, in a ceremony that was held here at Arlington House. It would be their home for the next 30 years, during which time Lee steadily rose in rank from a lieutenant to a colonel in the United States Army. He served in the Mexican-American War, and more than a decade later he led the group of soldiers that suppressed John Brown’s raid on the federal arsenal at Harper’s Ferry.

Lee’s wife Mary inherited Arlington House after her father’s death in 1857, but the family did not get to enjoy the property for much longer. On April 16, 1861, four days after the attack on Fort Sumter, Abraham Lincoln offered Lee command of the main Union army. However, Virginia declared its secession the following day, and Lee declined the offer. Instead, he resigned his commission in the the United States Army and joined the Confederate States Army, where he would command the Army of Northern Virginia for most of the war.

In the meantime, Arlington House quickly became a target for Union forces who were defending Washington. Because of its prominent location overlooking the city, it was imperative that it not fall into Confederate hands. The house was seized on May 24, 1861, and it subsequently became the headquarters of the Army of the Potomac. Despite this occupation, though, the Lee family formally continued to own the house until 1864, when it was taken by the federal government for nonpayment of taxes.

Later in 1864, with the Union needing more space to bury soldiers killed in the war, the property became Arlington National Cemetery. Part of the intention behind this move was to forever deprive Lee of the use of the estate, and to that end many of the early burials were right near the house. The first interment occurred on May 13, and thousands more would follow in the remaining 11 months of the war. These included the remains of 2,111 unidentified Union and Confederate soldiers, whose remains were collected from various battlefields. They were buried in a vault behind and to the left of the house, and the spot is marked by the Civil War Unknowns Monument.

Following the war, neither Robert E. Lee nor Mary Lee ever attempted to reclaim the title of the estate, although their oldest son, George Washington Custis Lee, successfully sued for its return. However, not interested in living in the middle of a cemetery, he then sold the property back to the federal government in 1883 for $150,000. In the ensuing years, though, the government directed most of its attention to the cemetery itself, with little concern for the mansion. By the time the first photo was taken around 1900, the house was largely unused, and the immediate grounds had been heavily altered from their prewar appearance.

The mansion was finally restored in the late 1920s, although the original focus was on the Custis family, as opposed to the Lees. However, in 1955 the house was renamed the Custis-Lee Mansion, and then in 1972 it became Arlington House, The Robert E. Lee Memorial, thus placing a greater emphasis on Lee’s connection to the house. It has remained in use as a museum since then, although it was closed for renovations in early 2018, a few months before the first photo was taken. As part of this project, the house will be restored to its 1860 appearance, and the slave quarters and surrounding grounds will also be restored. The work will cost an estimated $12.35 million, and it is scheduled to be completed in January 2020.