The Old Senate Chamber at the U. S. Capitol, around 1902, during its time as the courtroom of the Supreme Court. Image courtesy of the Library of Congress, Detroit Publishing Company Collection. 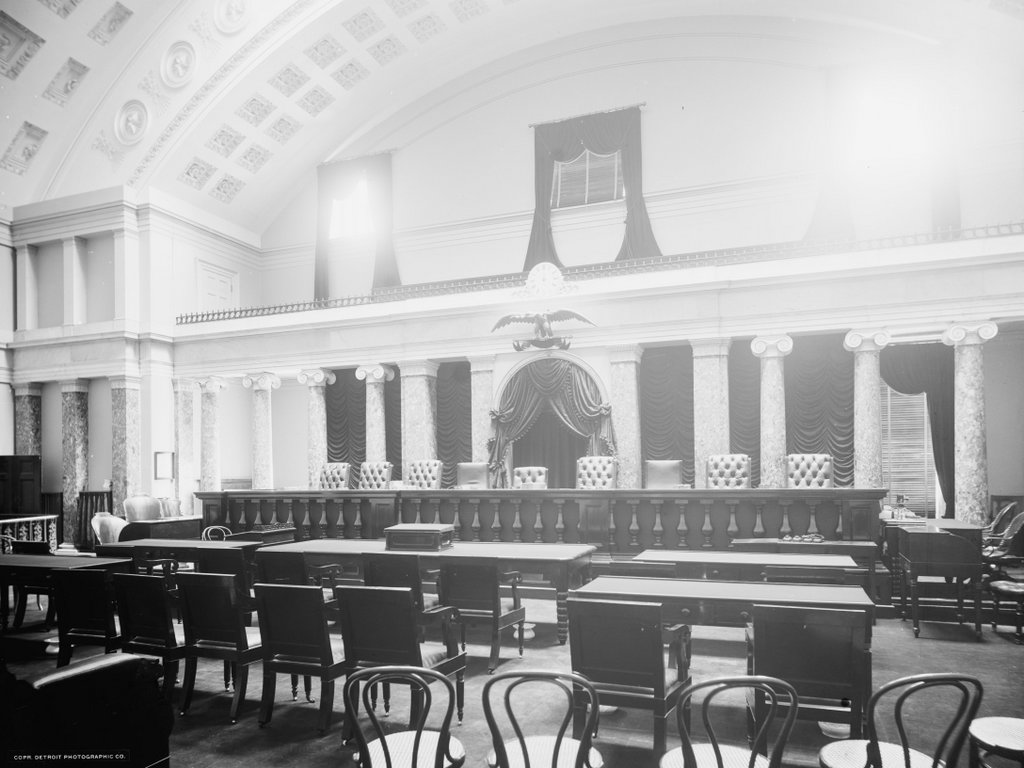 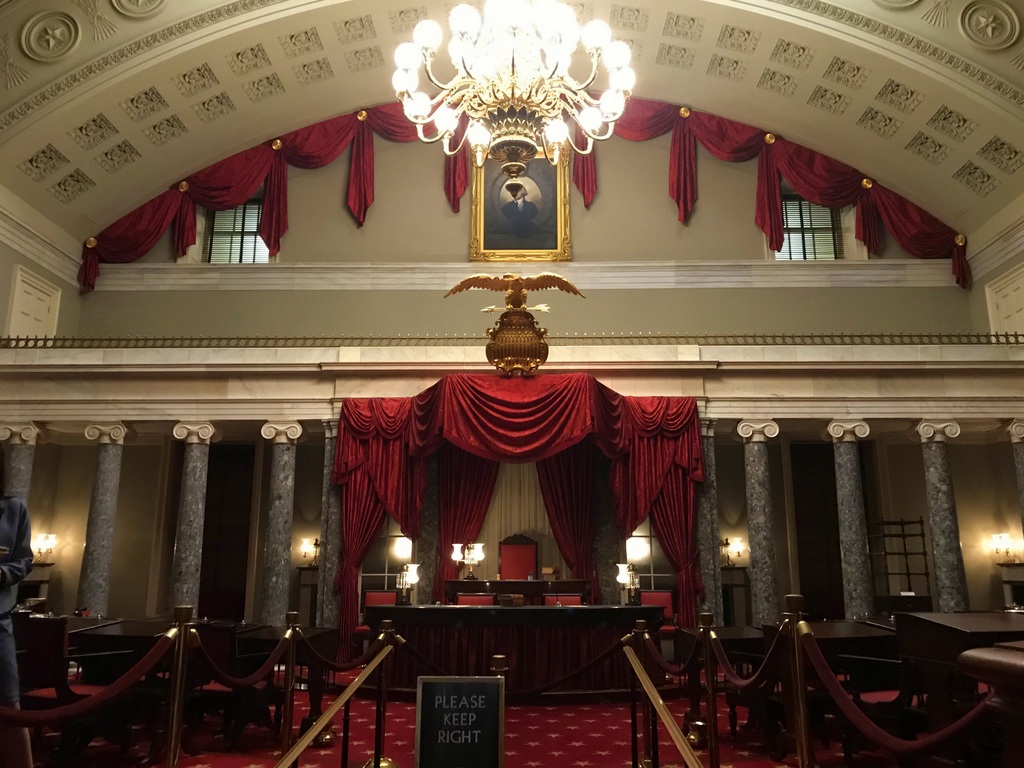 The United States Capitol was first used in 1800, the same year that the government moved to Washington D.C. from its temporary location in Philadelphia. Aside from a short interruption in the aftermath of the War of 1812, when the British burned much of Washington, the building has remained in use ever since, although it has undergone significant changes and expansions since then.

In its original form, the Capitol consisted of two wings, connected by a central rotunda that was topped by a low wooden dome. The south wing was occupied by the House of Representatives, which met in the chamber that is now known as Statuary Hall. Here on the north side of the building was the Senate wing, which had a chamber that was somewhat smaller than the House’s, given the smaller number of senators.

As with the House chamber, this Senate chamber was rebuilt after the War of 1812, and the work was completed in 1819. It was designed by architect Benjamin Henry Latrobe, and it is semicircular in shape, reflecting the appearance of an ancient amphitheater. Other classically-inspired features include the marble Ionic columns, which are similar to the Corinthian ones found in the House chamber. The room was built with two visitor galleries, with one along the curved wall behind the senators, and the other above the front of the room, as shown in this scene.

This chamber was the home of the Senate for the next 40 years, from 1819 to 1859. It was the scene of many important events in the years leading up to the Civil War, and for much of this time the Senate was dominated by the Great Triumvirate, consisting of John C. Calhoun of South Carolina, Henry Clay of Kentucky, and Daniel Webster of Massachusetts. Representing the three major regions of the country at the time, these men were three of the most powerful American politicians of the Antebellum period, and they were involved in many debates in this room.

However, perhaps the single most noteworthy incident in this room occurred on May 22, 1856, when abolitionist Senator Charles Sumner of Massachusetts was nearly caned to death at his desk by South Carolina Representative Preston Brooks. The attack was prompted by a speech that Sumner had given here two days before, in which he harshly criticized slavery in general and South Carolina Senator Andrew Butler in particular. Brooks, who was Butler’s cousin, then waited until Sumner was nearly alone here in the chamber, and began bludgeoning him with his cane while pinned Sumner under his desk.

The attack rendered Sumner unconscious, but Brooks continued to beat him until several other congressmen intervened. By this point, he had suffered serious trauma to his head and spinal cord, and it took three years before he had recovered enough to resume his duties in the Senate. In the meantime, the attack helped to further polarize the already divided nation, with southerners praising Brooks while northerners condemned his actions as an attack on free speech itself. Within less than five years, South Carolina would become the first state to secede from the Union, and it would begin the Civil War with its bombardment of Fort Sumter.

Even as the nation was dividing, though, the Capitol itself was growing. Westward expansion had led to the admission of many new states over the years, and the original congressional chambers were becoming crowded. This was particularly evident here in the Senate chamber, with the number of senators increasing by nearly 50 percent between 1819 and 1858, from 44 to 64. As a result, by the early 1850s work had begun on a massive expansion of the Capitol, creating two new, much larger wings beyond the original ones. The new House chamber was completed in 1857, followed by the new Senate chamber in 1859.

Both of these new chambers are still used today, and the old ones have since been repurposed. The former House chamber became the National Statuary Hall, and starting in 1860 the Senate chamber was occupied by the U. S. Supreme Court, which had previously met in the room directly underneath it. It would go on to be used as the courtroom of the Supreme Court for the next 75 years, before its current building opened across the street from the Capitol in 1935.

During this time, the Supreme Court heard a number of important cases here, perhaps the most notable of which was the 1896 Plessy v. Ferguson decision, which ruled that segregation was legal under the “separate but equal” doctrine. This was followed by the Lochner era of the court’s history, from 1897 to 1937, when the court took a politically conservative approach to economic regulations. Using the due process clauses of the Fifth and Fourteenth Amendments, the court struck down many state and federal laws, including those that limited weekly working hours, prohibited child labor, and established minimum wages.

Many prominent Supreme Court justices served on the bench here in this room. When the court first moved here in 1860, the chief justice was Roger B. Taney, who had served in that capacity since 1836. He remained on the court until his death in 1864, making him the second-longest tenured chief justice in history, but he is probably best known as the author of the 1857 Dred Scott decision. Other notable justices who served here included John Marshall Harlan, the sole dissenting vote in the Plessy case; Oliver Wendell Holmes Jr., who coined the phrase “shouting fire in a theatre” in a 1919 court opinion; Charles Evans Hughes, the chief justice who frequently clashed with Franklin D. Roosevelt over the president’s New Deal policies; and former President William Howard Taft, who served as chief justice from 1921 to 1930.

It was during Taft’s time as chief justice that he began lobbying for a separate building for the Supreme Court. This would not only relieve the overcrowding here in its Capitol quarters, but it would also reflect the court’s role as a separate, independent branch of the federal government. After Taft’s retirement and death in 1930, his successor Hughes continued these efforts, and two years later construction began on the present-day Supreme Court building. The site was directly across First Street NE from the Capitol, on the spot where the Old Capitol Prison had previously stood. The building was completed in 1935, and the court subsequently vacated this space here in the old Senate chamber.

The first photo was taken around 1902, and it shows the room’s appearance when it was used by the Supreme Court. At the time, the layout of the room bore little resemblance to its time as the Senate chamber. The senators had taken their desks with them when they moved in 1859, and the vice president’s dais at the front of the room was replaced by a long bench for the justices, as shown in the first photo. Probably the only object left from the Senate in that photo is the gilded wood eagle, located in the center above the chief justice’s chair. It was installed here as early as 1838, and it originally sat atop a wood shield. After the Supreme Court moved into here, the shield was placed above the door on the outside of the chamber, although the eagle remained at its perch the front.

After the Supreme Court left in 1935, this room was used intermittently for meetings, committee hearings, and even by the Senate itself on several different occasions during the mid-20th century, while its current chamber was undergoing renovations. Then, in 1976 the room underwent a major restoration in order to return it to its Senate-era appearance. This included the installation of 64 replica mahogany desks, which are arranged in four semicircular rows, reflecting the arrangement of the room in 1859.

Several original furnishings were returned to the room, including the vice president’s desk at the front, although the table in front of it is a reproduction. The eagle and shield were also reunited as part of this restoration, and they once again hang at the front of the room. Another original object here is the portrait of George Washington, visible directly above the eagle in the present-day photo. It was painted by Rembrandt Peale in 1823, and the Senate purchased it in 1832 and hung it here above the gallery. The painting was removed when the Senate left in 1859, but it was returned here in 1976.

Today, the room remains in its restored appearance, and it is periodically used by the Senate for special events, such as mock swearing-in ceremonies. Photography is not allowed in the Senate chamber, where the senators typically take their oaths of office, so the mock ceremonies here allow the press to take photographs of the occasion. Aside from these types of events, the room is also open for some public tours, although visitor access is limited to just the central aisle, as shown in the present-day photo.