The Apotheosis of Washington, seen looking up from the center of the U. S. Capitol rotunda, around 1904. Image courtesy of the Library of Congress, Detroit Publishing Company Collection. 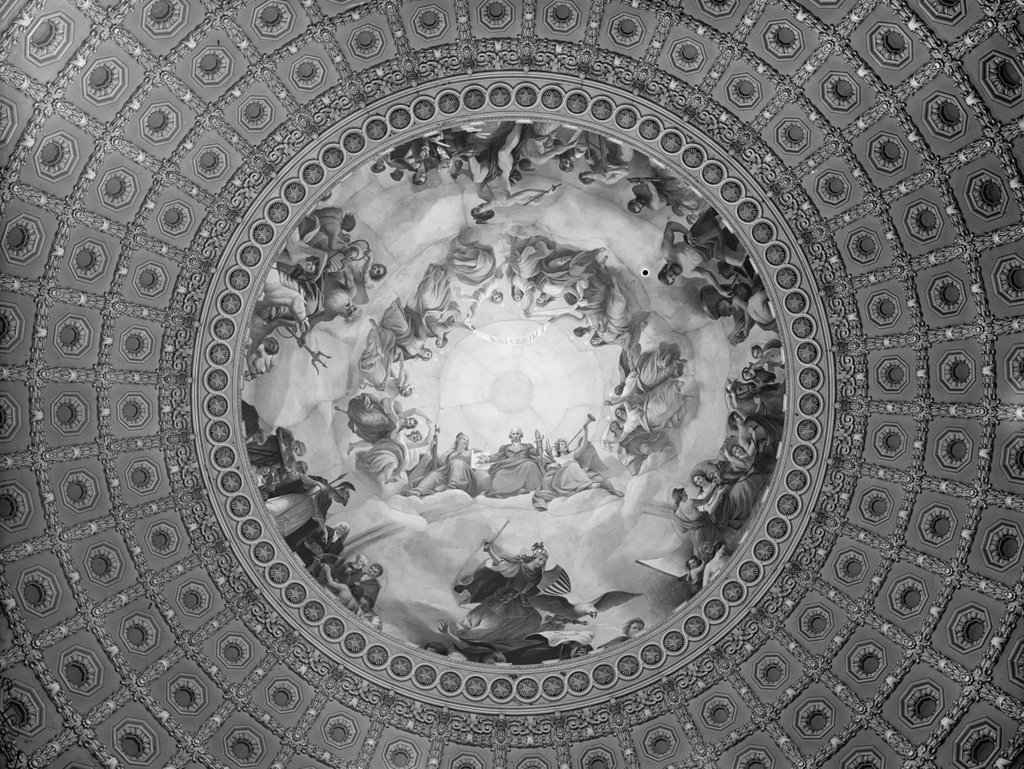 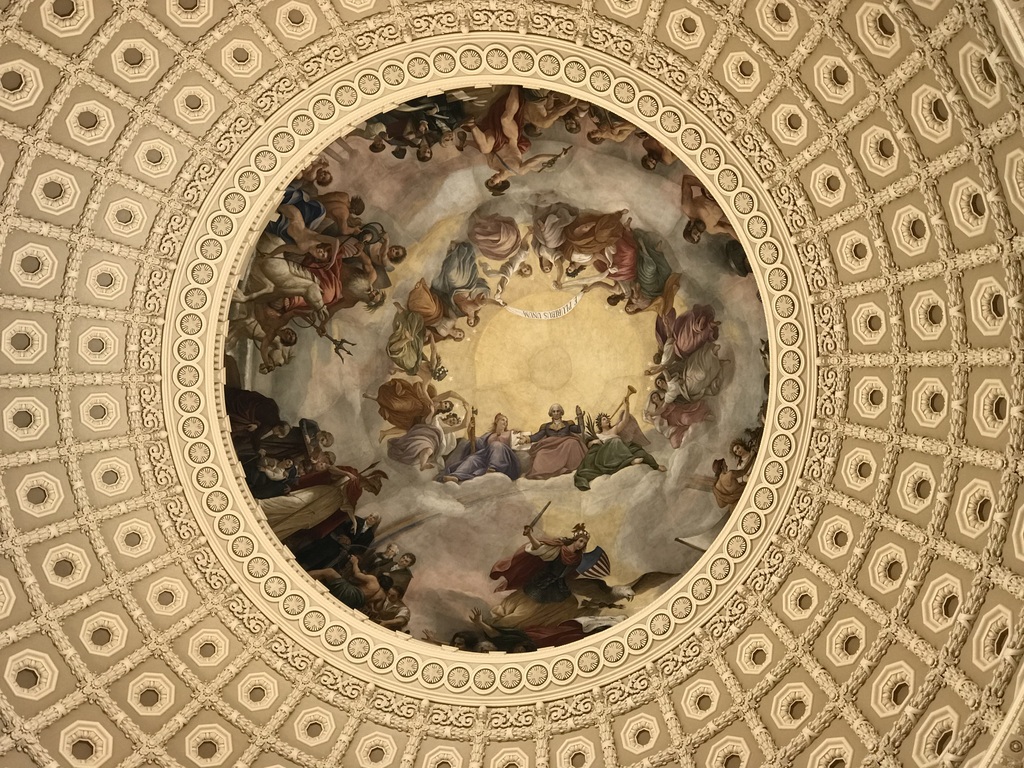 The 288-foot dome on the U. S. Capitol is one of the iconic symbols of both Washington, DC and the federal government. As discussed in an earlier post, though, this was not the original dome on the building. The first was completed in 1826, and it was made of wood that was covered in copper. However, as the Capitol was expanded in the mid-19th century, this low dome became disproportionately small compared to the rest of the building, and a new one was constructed starting in 1855. It took nearly a decade to finish, though, and the incomplete dome featured prominently in Civil War-era photographs of the Capitol, inadvertently serving as a metaphor for the unfinished work of uniting the country.

The structure of the dome was ultimately completed in 1863. It is made of cast iron, and it consists of both an interior and exterior dome. At the top of the lower interior dome is a 65-foot-wide oculus, which is shown here in this scene. Above the oculus, and directly beneath the exterior dome, is a nearly hemispherical canopy where, starting in 1865, artist Constantino Brumidi painted The Apotheosis of Washington, a 4,664-square-foot fresco showing George Washington ascending into heaven. It was painted over the course of 11 months, and it was completed in 1866, marking the formal end of the Capitol’s reconstruction.

The fresco features George Washington seated between the goddess Victoria on his left, and the goddess Liberty on his right. Above these figures, a group of 13 maidens form a circle, representing the 13 original colonies. Directly above Washington, several of them hold a banner that reads “E Pluribus Unum.” Around the outer part of the fresco is a second circle, with figures arranged into six scenes, each of which represents a particular attribute of the country. Starting at the scene beneath Washington and moving clockwise, they are: War, Science, Marine, Commerce, Mechanics, and Agriculture.

It is difficult to see from this angle, but there is actually a balcony with a railing that encircles the oculus, below the fresco. The railing is 152 feet above the floor of the rotunda, and the center of the fresco is another 28 feet further up. There are stairs that reach up to this balcony, although access is extremely limited. From here, another set of stairs climbs above the fresco, up to the top of the exterior dome to the base of the Statue of Freedom.

Today, more than 150 years after the dome was completed, The Apotheosis of Washington continues to adorn the top of the rotunda. The fresco underwent significant cleaning and restoration in 1987-1988, in order to remove years of accumulated grime, and more recently the dome itself was the subject of a major restoration from 2014 to 2016. The project involved repainting the dome, along with repairing structural and water damage, and it was completed about two years before the second photo was taken. As a result, this scene now looks essentially the same as it did when the first photo was taken more than a century ago.