The Halfway House on the northern slope of Mount Holyoke in Hadley, around 1867-1885. Image courtesy of the New York Public Library. 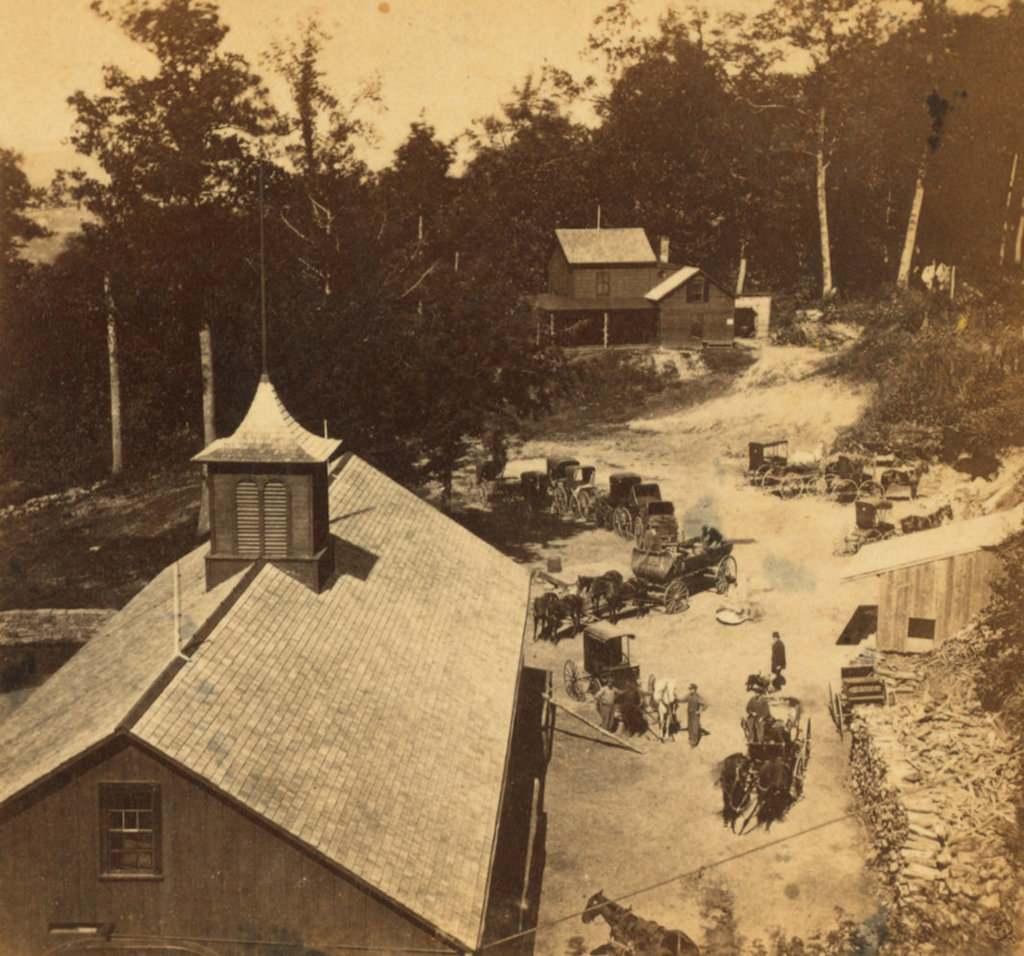 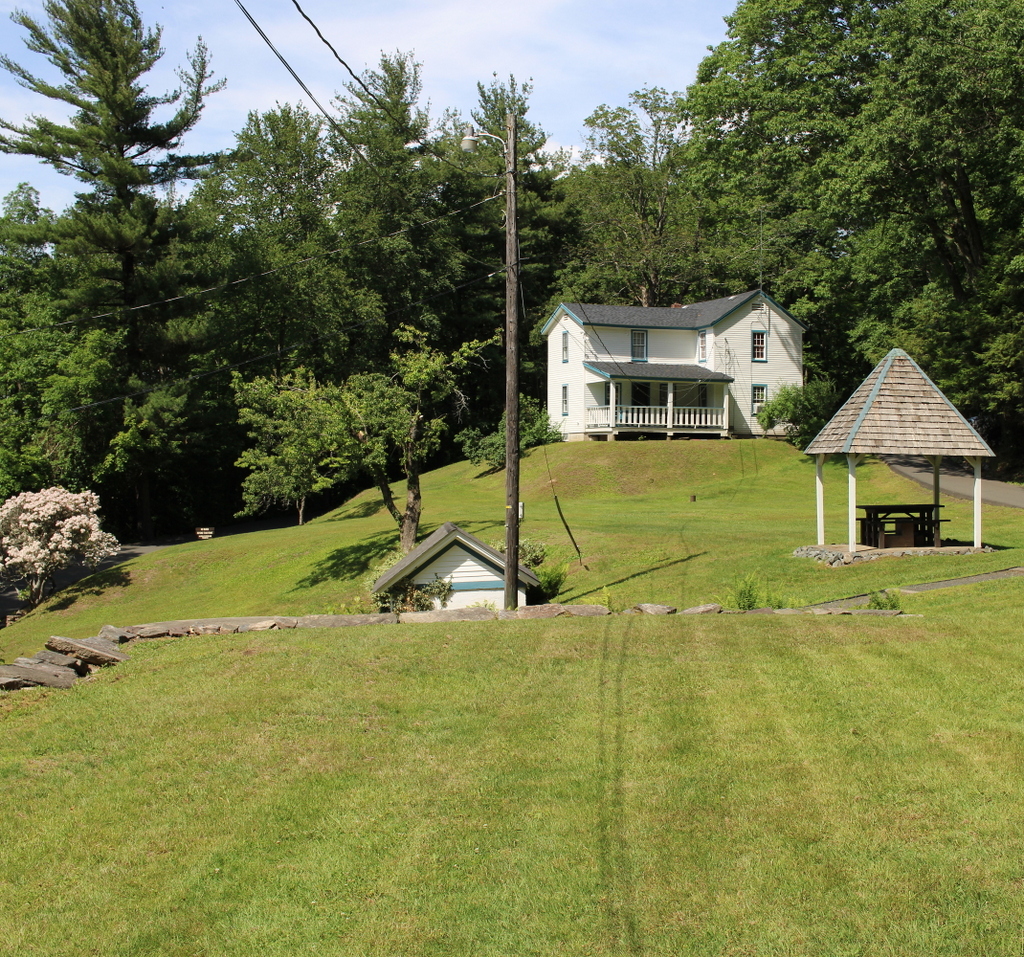 For the past two centuries, the view from the top of Mount Holyoke has been one of the most celebrated mountaintop scenes in New England. Although only 935 feet above sea level, the traprock mountain rises abruptly from the low valley floor, providing nearly 360-degree views of the Connecticut River and the surrounding countryside. As a result, the mountain has drawn countless visitors over the years, and its view has been the subject of many works of art, including one of the most iconic American landscape paintings, Thomas Cole’s The Oxbow.

During the Romantic era of the early 19th century, a new emphasis on nature helped to spur interest in landscapes and scenery. Mountains, which had previously been regarded as impediments to travel, became destinations in their own right, leading to a proliferation of mountaintop hotels, particularly here in the northeast. Among the first of these was a small cabin that was built at the summit of Mount Holyoke in 1821. A second, rival structure was built a few years later, but it would be another three decades before a real hotel was built at the summit.

In 1849, Northampton bookbinder John French and his wife Frances purchased the property at the summit, and soon began construction on a new, more substantial structure. Completed in 1851 and named the Prospect House, the hotel was two stories in height, with a dining room, sitting room, and office on the first floor, and six guest rooms on the second floor.

French originally intended to live in the hotel year-round, but the windswept summit proved too cold and isolated in the winter, so in 1852 he and his family moved into a house on the northern slope of the mountain, shown here in the upper right side of both photos. It was known as the Halfway House, and in terms of elevation it is just over halfway from the valley floor to the summit. However, beyond here the climb becomes significantly more difficult. Up to this point, it is a steady but moderate ascent, but after the Halfway House the most direct route to the summit is up a steep slope, gaining over 350 feet in elevation in just 600 feet.

When the Prospect House opened, the only way up to the hotel from the Halway House was either by riding along a winding, narrow carriage road, or by climbing the short but steep path to the summit. Not only was this challenging for visitors to reach the hotel, but it also made it difficult for French to bring supplies. With no springs anywhere near the summit, water was a particularly scarce commodity, as it all had to be carted or carried up these same routes. As a result, visitors were charged for the water that they drank, paying between three and five cents per glass, or about $1 to $1.50 today. In addition, other liquid refreshments sold for considerably higher on the mountain than elsewhere.

In order to solve these problems, in 1854 French built an incline railway from here at the Halfway House to the summit. It was originally powered by a stationary horse, but two years later French replaced it with a steam engine. The entire railway was 600 feet in length, and by the late 1860s it was completely enclosed by a wooden shed. These two photos were taken from around the spot where the railway began, and from here it brought visitors directly into the basement of the Prospect House, allowing them to reach the hotel without even stepping outside.

John French expanded the hotel in 1861, and in 1867 he added a second track to the railway. Throughout this time, he and Frances resided at the Halfway House. The 1870 census shows them here with their 21-year-old daughter Frances. At the time, they also had three employees who lived here with them, including a clerk, a domestic servant, and a teenager who was listed as a “boy of all work.” The census listed the value of French’s real estate at $20,000, plus a personal estate valued at $8,000, for a total net worth equivalent to around $575,000 today.

French ultimately sold the hotel a year later in 1871 to South Hadley businessman John Dwight. However, Dwight retained John and Frances to manage the hotel, and they continued to live here in this house. The 1880 census lists them here along with a number of employees, including a telegraph operator, two cooks, a waiter, and an engineer. However, it seems unlikely that they would have all lived together in this small house, so they may have lived in other nearby buildings, or perhaps even in the hotel itself.

John French lived here until his death in 1891, and Frances until she died in 1899. By then, the hotel had been expanded even further. with an 1894 addition that gave the building a capacity of 40 guests. However, despite this growth the hotel entered a decline in the early 20th century. It was eventually acquired by wealthy Holyoke silk manufacturer Joseph Skinner in 1915, and he set about modernizing the building. Despite these improvements, though, the the heyday of mountaintop hotels had passed, and the Great Depression further compounded the problem. Then, the 1938 hurricane caused substantial damage to the hotel, requiring the demolition of the 1894 addition.

Skinner ultimately donated the hotel and its property to the state in 1939, with the land becoming the Joseph Allen Skinner State Park. However, the state showed little interest in the buildings on the property, which were largely neglected for many years. The inclined railway was last used in the early 1940s, and it was badly damaged after the roof of the shed collapsed in a heavy snowstorm in 1948. The remains of the railway were ultimately removed in 1965, and the hotel itself was also nearly demolished in the second half of the 20th century. However, it was instead restored, and it now serves as a museum.

Today, despite the loss of the railway, the Halfway House itself is still standing. It has been enlarged since the first photo was taken, with the addition of a second story above the rear part of the building, but otherwise it is still recognizable from its 19th century appearance. Although there are no longer any overnight accommodations at the summit, Mount Holyoke remains a popular destination. Most visitors still pass by the Halfway House on their way up the mountain, either by way of the auto road on the left side of the scene, or the hiking trail that crosses the road here before ascending steep slope to the summit.