The old New York State Capitol, on the north side of State Street a little east of Eagle Street, around 1860-1880. Image courtesy of the New York State Archives. 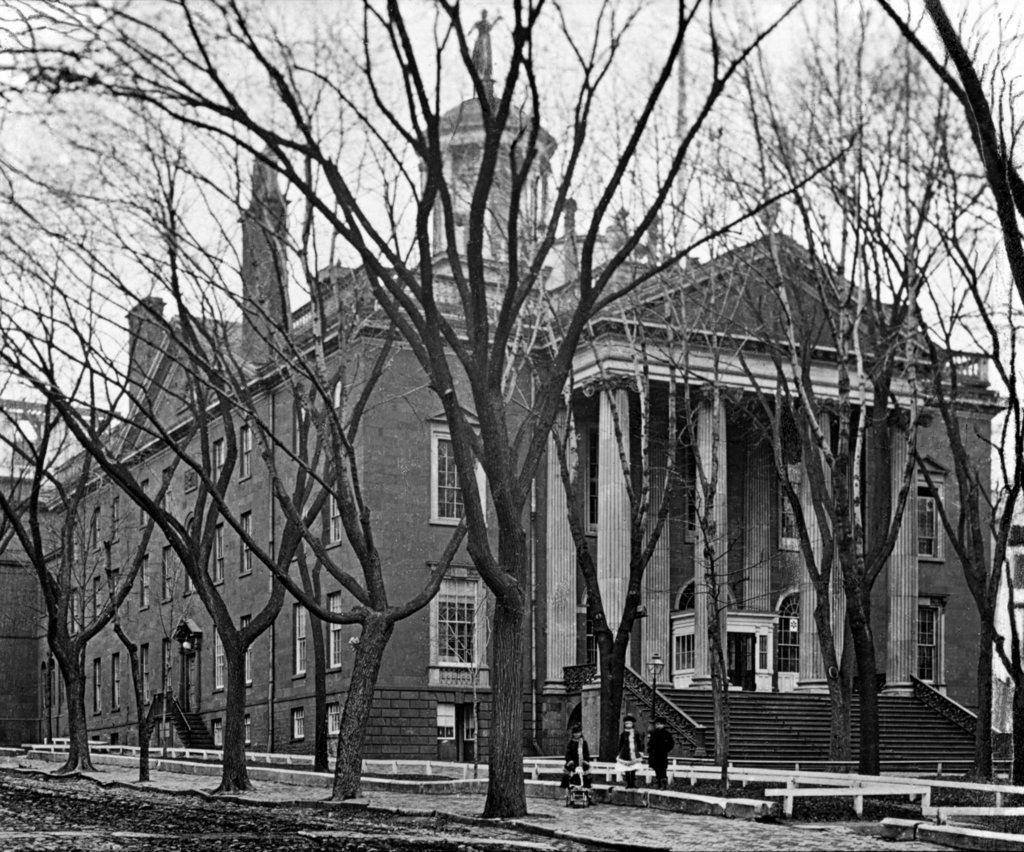 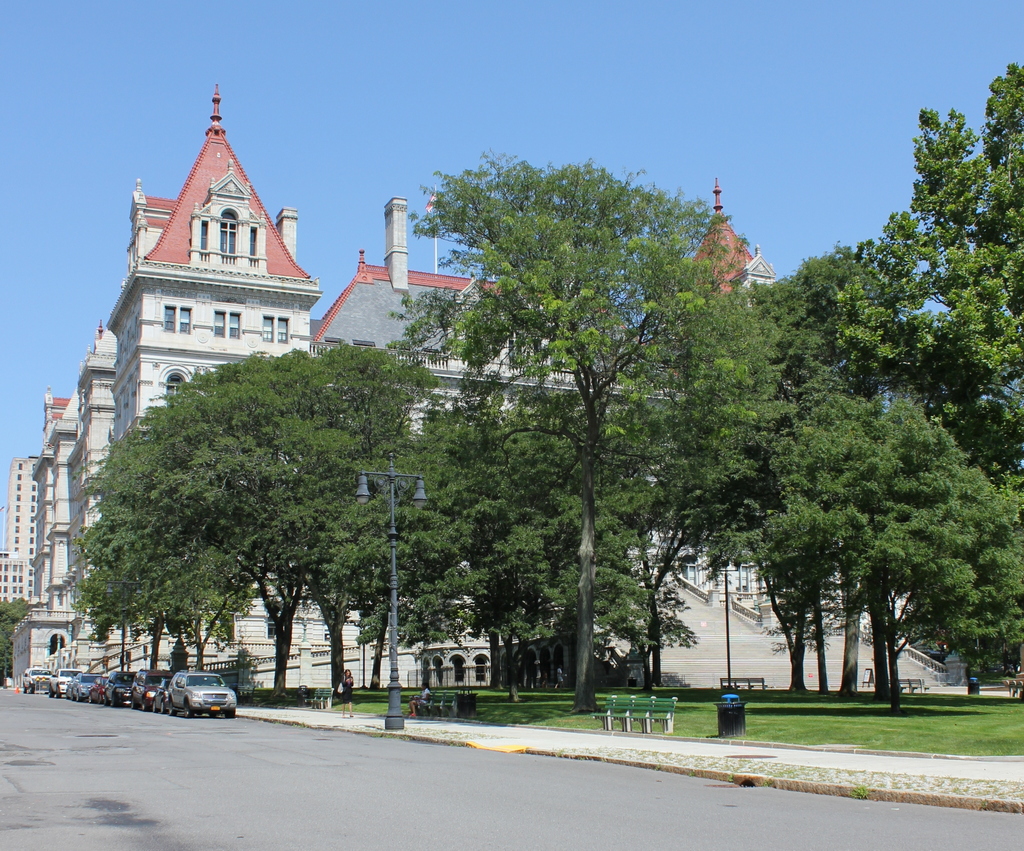 Albany has been the capital of New York since 1797, but for the first decade or so the state legislature met in City Hall, which served as the temporary capitol building until a new one was built. Construction on the first purpose-built capitol, shown here in the first photo, began around 1806. It was designed by prominent Albany architect Philip Hooker, and it featured a brownstone exterior with marble trim. Its Federal-style design included a portico with Ionic columns here on the east facade, and a cupola atop the three-story building. On the top of the cupola was an 11-foot wooden statue of Themis, with a sword in her right hand and a balance in her left.

Overall, though, despite being the capitol of what was, at the time, the largest state in the country, this building was decidedly modest in its appearance, especially when compared to its contemporaries in neighboring states such as Massachusetts and Connecticut. This was likely dictated more by budgetary constraints than to Hooker’s talent as an architect, but one major criticism of his design was the awkward inconsistency between the apparent two-story east facade, and the three stories on the other sides of the building. Aside from the portico and cupola, the rest of the exterior was largely devoid of ornamentation. Even then, many of these decorative elements were cheaply-made. Like the statue of Themis, the pediment and entablature was made of wood, and even the columns were deceptive in their appearance; instead of solid marble, they were brick with marble veneers. In total, the capitol only cost around $115,000 to build, equivalent to less than $2 million today.

The capitol was completed in 1809, and it served as the seat of the state government for the next 70 years. For the first few decades it also housed Albany’s city government, before a new City Hall—which was also designed by Philip Hooker—was built nearby in 1831. However, it did not take long for the state to outgrow the capitol, even with the extra space after the city government moved out. In 1842, State Hall—now known as the New York Court of Appeals Building—was built nearby on Eagle Street to provide additional room for state offices, and in 1854 a separate State Library building was added behind the capitol.

Even with these expansions, though, the capitol was still generally considered to be inadequate, in terms of both aesthetic appearance and practical use. One legislator even went as far as to declare it to be “an offense to the eye and a reproach to the state.” There was clearly a need for a new capitol, but the issue also raised the question of whether Albany should even remain the capital city. Many other cities, including New York City, made overtures in hopes of becoming the new capital, but in the end the state legislature decided to remain in Albany, and in 1865 voted to acquire land for the construction of a new capitol building.

The new capitol was to be located directly behind the old one, and it would be everything that the old one was not: massive, architecturally grand, and expensive. It also took much longer to build; construction started in 1867, and it was not completed until 1899, after many delays and cost overruns. In the end, it cost $25 million to build, or about 400 times the cost of the old capitol, after adjusting for inflation. Because of these delays, the state legislature remained here in the old capitol for more than a decade after construction began, before moving into the new partially-completed building in 1879. The old building continued to be used for state offices for several more years, though, before finally being demolished in 1883.

Today, this scene bears no resemblance to its appearance when the first photo was taken about 150 years ago. The site where the old capitol once stood is now part of East Capitol Park, and in the background is its replacement, which continues to be used as the state capitol today. However, there are several surviving remnants from the old building, although they are not located in the present-day scene. During the demolition, the four Ionic capitals at the top of the columns were saved and given to Governor David Hill, who displayed them on the grounds of his estate on the outskirts of Albany. The property later became Wolferts Roost Country Club, but the capitals remained there until around the 1970s, when they were unceremoniously dumped into a ravine. Three of these were ultimately recovered in 2014, and at the time there was talk of returning them here to East Capitol Park, although this proposal does not appear to have been carried out yet.