St. Peter’s Episcopal Church, at the corner of State and Lodge Streets in Albany, around 1908. Image from Views of Albany (1908). 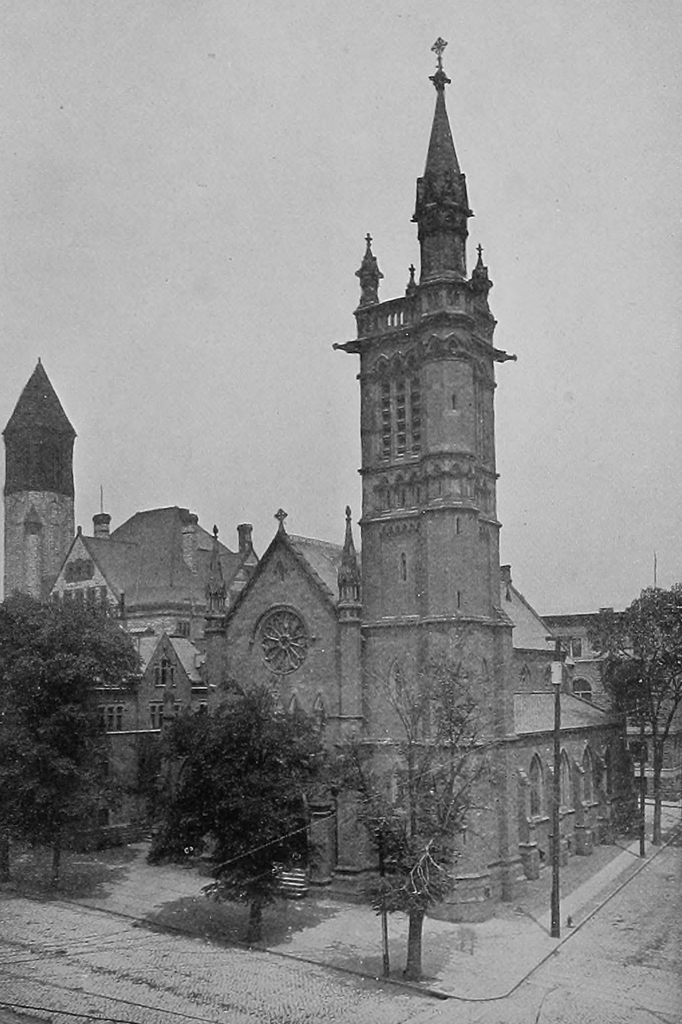 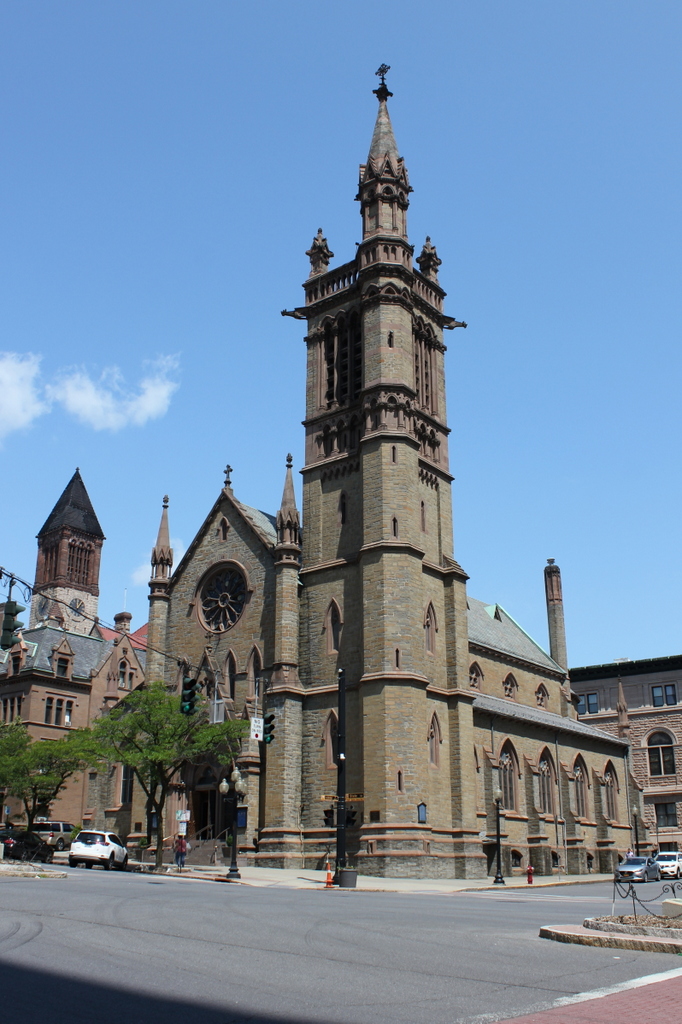 This church is one of Albany’s most important architectural landmarks. It was designed by prominent architect Richard Upjohn, who specialized in Gothic Revival-style churches, and it was consecrated in 1860. However, the parish itself is much older, dating back to 1708, when Anglican services were first held in Albany. The first church building was constructed in 1715, at what is now the corner of State and Chapel Streets, and it was used throughout the rest of the 18th century, aside from a temporary closure during the American Revolution.

Then, in 1803 the church moved into a new building here at the corner of State and Lodge Streets. Its architect, Philip Hooker, was responsible for many of Albany’s important public buildings of the era, including the First Church in Albany on North Pearl Street. That church is still standing more than two centuries later, but his work here at St. Peter’s Church did not have the same longevity. The building, barely 50 years old, was declared structurally unsound in 1857, and the church temporarily held its services in the Geological Hall until a new church could be built.

The old church was demolished in early 1859, and work soon followed on the new building here on the same site. It was completed about a year and a half later, and formally consecrated on October 4, 1860. The ceremony was attended by a variety of prominent Episcopal clergymen in the area, including Bishop Horatio Potter of the Diocese of New York. Albany was familiar territory for Potter, who had previously served as rector here at St. Peter’s Church from 1833 to 1854, before he was elevated to bishop. He would go on to serve as bishop of the diocese for more than 30 years, until his death in 1887.

The only part of the church that was not completed in 1860 was the tower. It would not be finished for another 16 years, and in the meantime it rose to a height of just 56 feet, with a temporary roof atop it. The rest of the building measured 136 feet in length, 68 feet in width, and 64 feet in height. The exterior consisted of Schenectady bluestone, with New Jersey sandstone for the trim. The design was inspired by French Gothic architecture, and although it is generally credited to Richard Upjohn, his son Richard M. Upjohn was also involved in the project. The younger Upjohn would go on to have a successful career in his own right, and he was responsible for designing the rest of the 180-foot tower that was added to the church in 1876.

The first photo was taken shortly after the turn of the 20th century, and by this point the church was joined by a number of other newer buildings. Immediately to the left is the Tudor-style Potts Memorial Rectory, which was completed in 1896 and named in honor of Jesse and Eunice Potts, whose children donated the money for its construction. Beyond the church on the far right side of the scene is the Albany Masonic Temple. It was also built in 1896, although the land itself has been owned by the Masons since 1766, making it the oldest continuously-owned Masonic property in the country. The other late 19th century building in the scene is Albany City Hall, which was completed in 1883 and stands in the distance on the left side. It is one of the few buildings in Albany that rival St. Peter’s Church in architectural importance, having been designed by famed architect Henry H. Richardson.

Today, more than a century after the first photo was taken, much has changed along State Street in Albany, as seen in the photos of an earlier post showing the view from a few blocks east of the church. However, the buildings in the first photo here have remained remarkably well-preserved during this time, and all four are still standing, with few significant exterior alterations. The church itself is still an active Episcopal parish, and in 1980 it was designated as a National Historic Landmark for its architectural significance. The other nearby buildings have likewise received federal recognition; both the parish house and the Masonic Temple are now part of the Downtown Albany Historic District on the National Register of Historic Places, and City Hall is individually listed on the National Register.