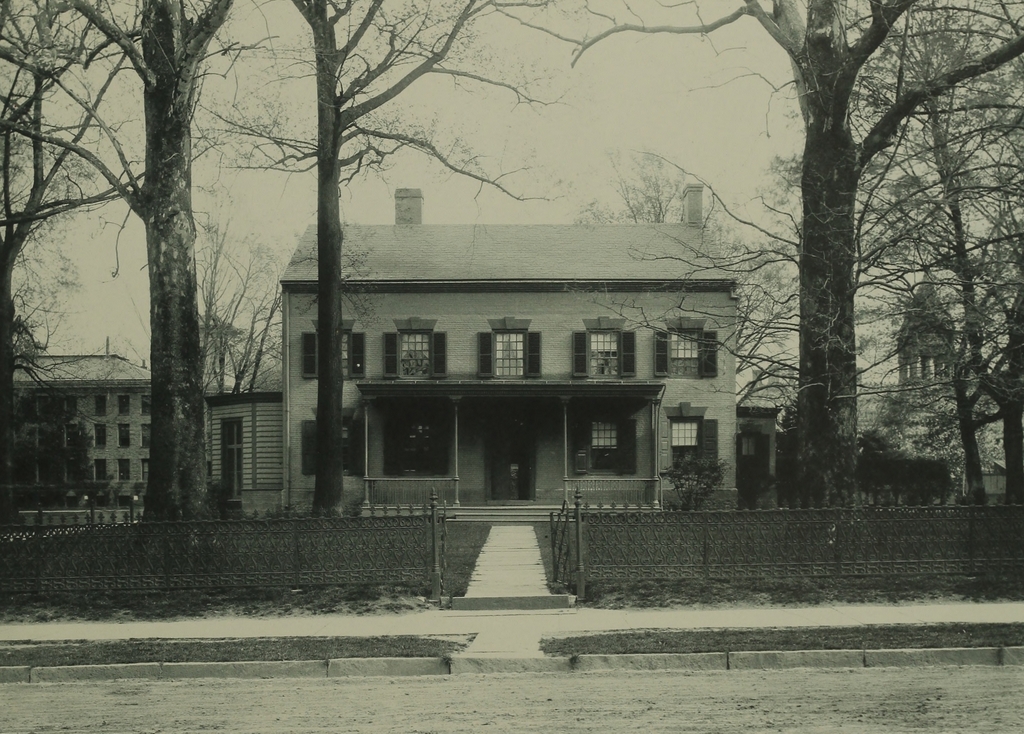 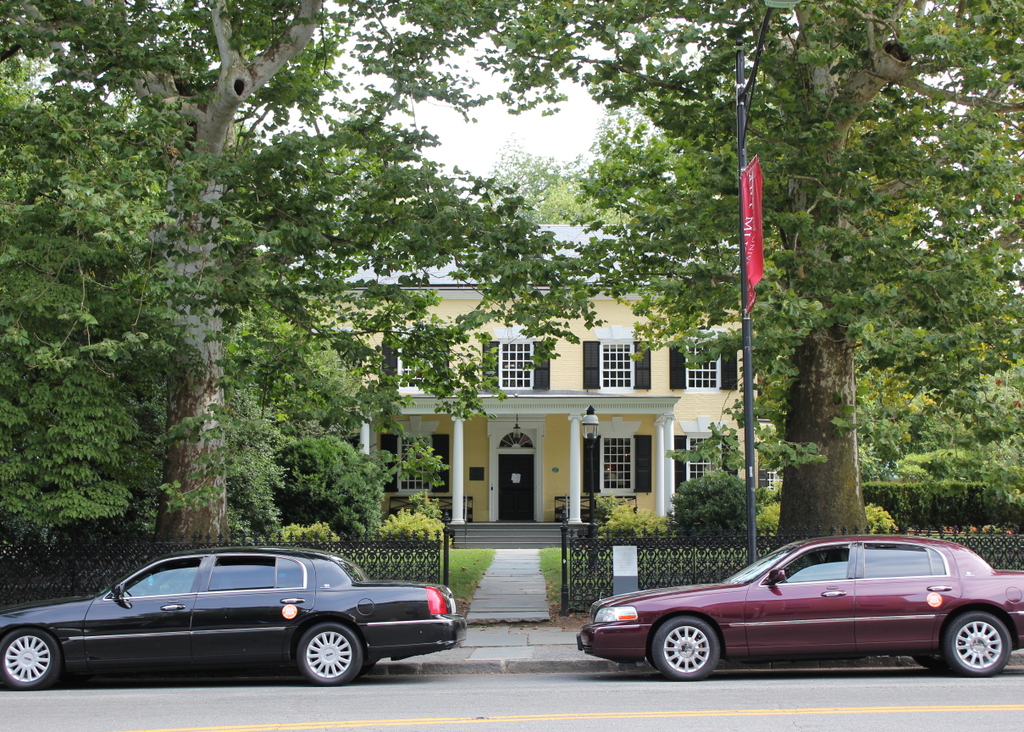 As discussed in the previous post on Nassau Hall, Princeton University was established in 1746 in Elizabeth, New Jersey, as the College of New Jersey. The school moved to Newark a year later, and then to Princeton in 1756, upon completion of Nassau Hall. At the time, Nassau Hall encompassed all of the school’s amenities under one roof, including classrooms, dormitory rooms, offices, a dining room, and a meeting hall. However, the school did have a separate building for the college president, who lived here in this brick two-story house, located immediately to the northwest of Nassau Hall, fronting Nassau Street. Like its neighbor, the house was completed in 1756, and it was likewise designed by Philadelphia architect Robert Smith. Its first occupant was Aaron Burr Sr., who had served as Princeton’s president since 1748.

Burr died only a year after moving into this house, in the fall of 1757, leaving his widow Esther with two young children, including future vice president Aaron Burr, who was just a year and a half old at the time. Burr’s replacement as president was Esther’s father, Jonathan Edwards, the famous pastor and theologian. Edwards had begun his ministry career in Northampton, Massachusetts, where his preaching had helped to spark the Great Awakening. However, after many years in Northampton he was dismissed by the congregation in 1750, and he subsequently moved to the remote western Massachusetts town of Stockbridge. There, he served as a missionary to Native Americans until the College of New Jersey invited him to be its next president.

Edwards arrived here in Princeton in the midst of a smallpox epidemic, and one of his first priorities was to encourage students to receive a smallpox inoculation. Leading by example, he was inoculated on February 23, 1758. However, what was supposed to be just a mild case of smallpox progressively worsened over the next few weeks, and he died here at this house in Princeton on March 22, barely a month after becoming president of the college. He was buried in nearby Princeton Cemetery, alongside his predecessor and son-in-law, in a plot that later became known as Presidents’ Row because of the many college presidents interred there.

After Edwards’s death, this house was subsequently occupied by the next eight college presidents: Samuel Davies, Samuel Finley, John Witherspoon, Samuel Stanhope Smith, Ashbel Green, James Carnahan, John Maclean, and James McCosh. Of these, Witherspoon was probably the most notable. In addition to serving as president for more than 25 years, Witherspoon was also involved in politics during the Revolutionary War era. He was a delegate to the Continental Congress, and in that capacity he was one of the signers of the Declaration of Independence, becoming the only active clergyman to sign the document.

Aside from being the residence of many Princeton presidents, this house was also home to a number of slaves over the years. Most of the early presidents were slaveowners, and New Jersey was among the last of the northern states to abolish slavery. The state enacted a gradual emancipation plan starting in 1804, but slavery in New Jersey was not fully eliminated until the passage of the 13th Amendment in 1865. The last Princeton president to have slaves here in the house was Ashbel Green, who was president from 1812 to 1822. He had at least three slaves here during this time, including Betsey Stockton, whom he freed in 1817 when she was about 19 years old. She remained here as a paid servant for the next five years, and during this time she also received an education. Then, in 1822 she traveled to Hawaii as a Christian missionary, and upon returning to America she became an educator, eventually teaching for many years at an African-American school here in Princeton.

The last college president to occupy this house was James McCosh, who moved into the newly-acquired Prospect House in 1878. The house was then used as the residence of the dean of faculty, and seven different deans lived here between 1883 and 1967. The first photo was taken during this period, no later than 1894, and it shows the northern side of the house, from Nassau Street. This photo also shows two large sycamore trees standing in front of the house. These trees had been planted in 1765, less than a decade after the house was built, and by the time the photo was taken they were already nearly 130 years old.

Today, more than 125 years after the first photo was taken, very little has changed here in this scene. The house is now occupied by the Alumni Association of Princeton University, and it is named the Maclean House in honor of John Maclean, who lived here during his presidency and served as honorary president of the Alumni Association. Despite these changes in use, though, its exterior has remained well-preserved, and along with Nassau Hall it stands as the oldest building on the Princeton campus. Perhaps even more remarkable, though, is that the two sycamore trees are also still standing. Now more than 250 years old, they are nearly twice as old as they were in the first photo, and in the summer their leaves partially hide the view of the house from the street, as shown in the present-day photo.