Looking north on North Main Street from the corner of Bank Street in Fall River, around 1914-1920. Image courtesy of the Library of Congress, Detroit Publishing Company Collection. 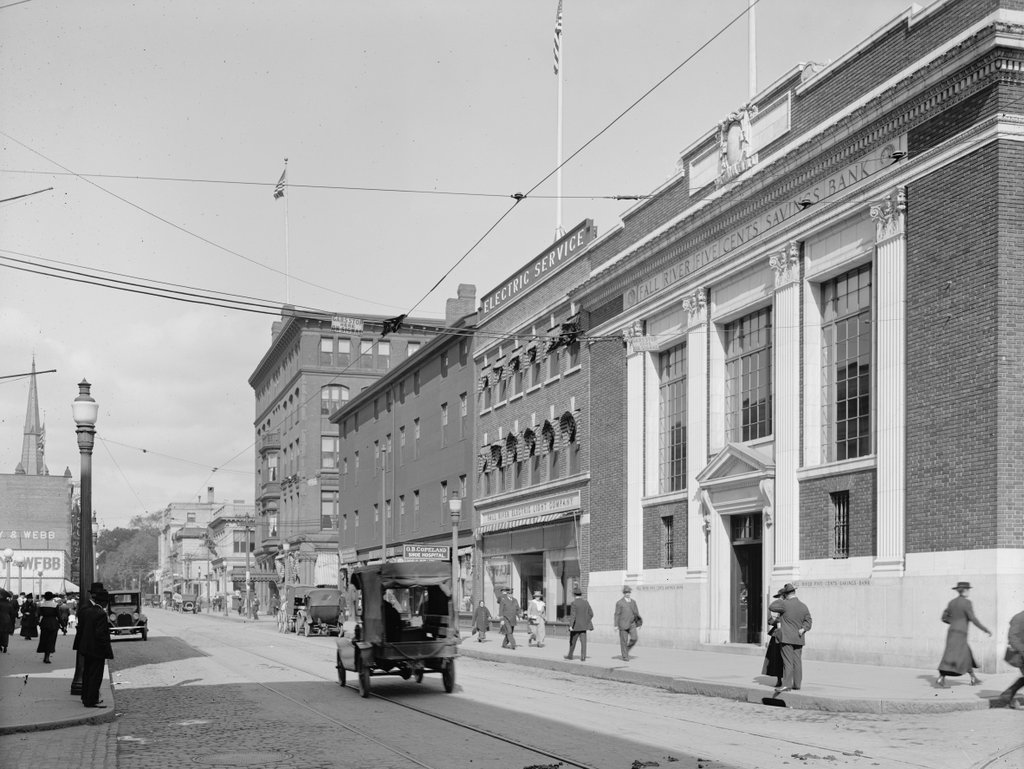 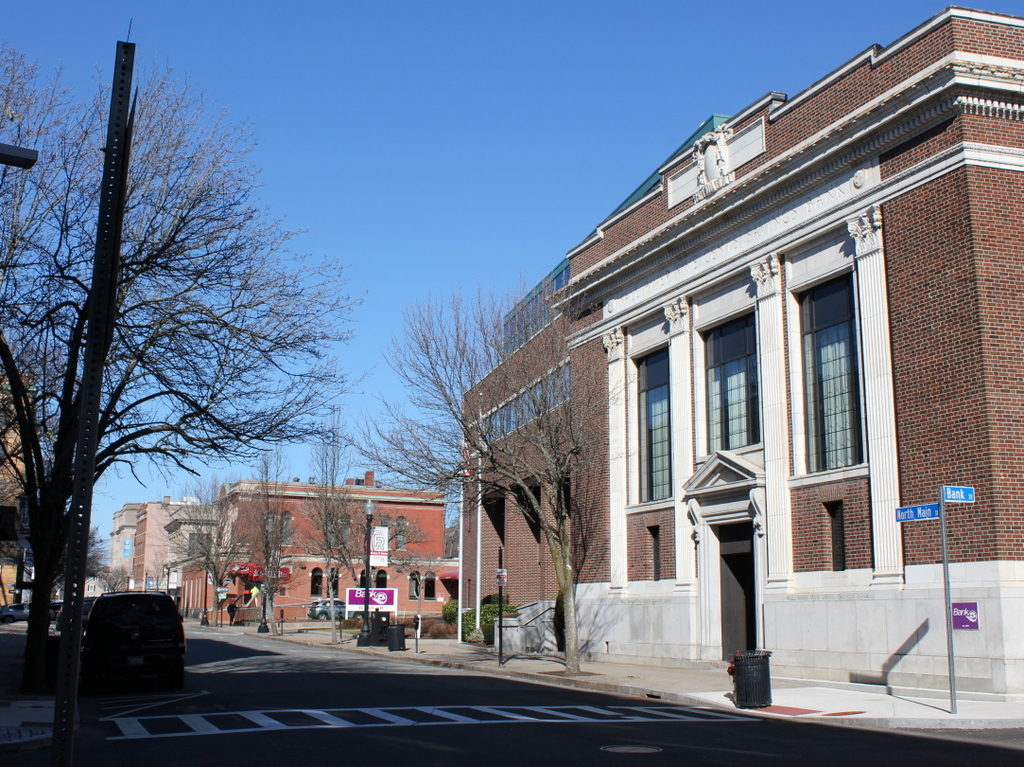 Throughout the 19th century, Fall River was a prosperous textile manufacturing center. The city saw dramatic population growth during this time, particularly in the post-Civil War period. Between 1860 and 1900, the city grew nearly eightfold, from 14,000 to nearly 105,000, and by the turn of the century it was the third-largest city in Massachusetts, behind only Boston and Worcester.

However, the same textile industry that had brought such prosperity also led to the city’s decline, as mills closed and businesses relocated to the south starting in the 1920s. This, combined with a catastrophic fire that destroyed much of the downtown area in 1928, both hurt the local economy, and these problems were only exacerbated by the stock market crash at the end of the decade.

The first photo was taken in the final years of the textile industry’s heyday in Fall River, probably sometime between 1914 and 1920. The earliest possible date is 1914, when the Fall River Five Cents Savings Bank building was built on the far right side of the scene, at the corner of North Main and Bank Streets. The neighboring building to the left of it was also built in 1914, and in the first photo it was occupied by the Fall River Electric Light Company.

Just beyond the electric company building is the Mount Hope Block, which was perhaps the oldest building in the first photo. It was built in 1845, in the aftermath of a large fire two years earlier, and it was originally known as the Mount Hope House. At the time, it was one of two hotels in Fall River, and in 1847 a state gazetteer declared that “in the erection and furnishing no pains have been spared to make it a desirable place for any one disposed to spend a few days.” Later in the 19th century it was known as the Narragansett Hotel, and by the early 20th century it was the Evans House. The building initially occupied the entire length of the block between Bank and Franklin Streets, but the southern portion was demolished to build the bank and the electric company buildings, leaving only the northern half as shown in the first photo.

Beyond the Mount Hope Block, on the other side of Franklin Street, the largest building in the first photo is the Hotel Mellen. It opened in 1888, and was the city’s finest hotel throughout the first half of the 20th century. The building survived the 1928 fire, but it was subsequently gutted by a fire in 1943, leaving only the brick walls still standing. The hotel was rebuilt inside the brick shell of the old building, although the new one was six stories in height, rather than five.

Today, more than a century after the first photo was taken, there is very little that survives from the first photo, especially in the foreground. The bank is still standing at the corner, but the former electric company building and the Mount Hope Block are both gone. Both of these buildings were here when the Downtown Fall River Historic District was created in 1983, but they were demolished at some point after that, and the site is now occupied by a large wing of the bank building. This facility still serves as the main offices of the Fall River Five Cents Savings Bank, which is now branded as BankFive.

Further in the distance, the reconstructed Hotel Mellen is also gone. The hotel closed around the early 1960s, and the building was converted into a temporary city hall after the old city hall building was demolished to build Interstate 195. The current Brutalist-style city hall was completed in 1976, and the old hotel was then demolished soon after. Beyond the Hotel Mellen, there are several surviving buildings from the first photo, but for the most part this side of North Main Street has undergone signficiant changes, unlike the right-hand side of the street, which has been better-preserved over the years.