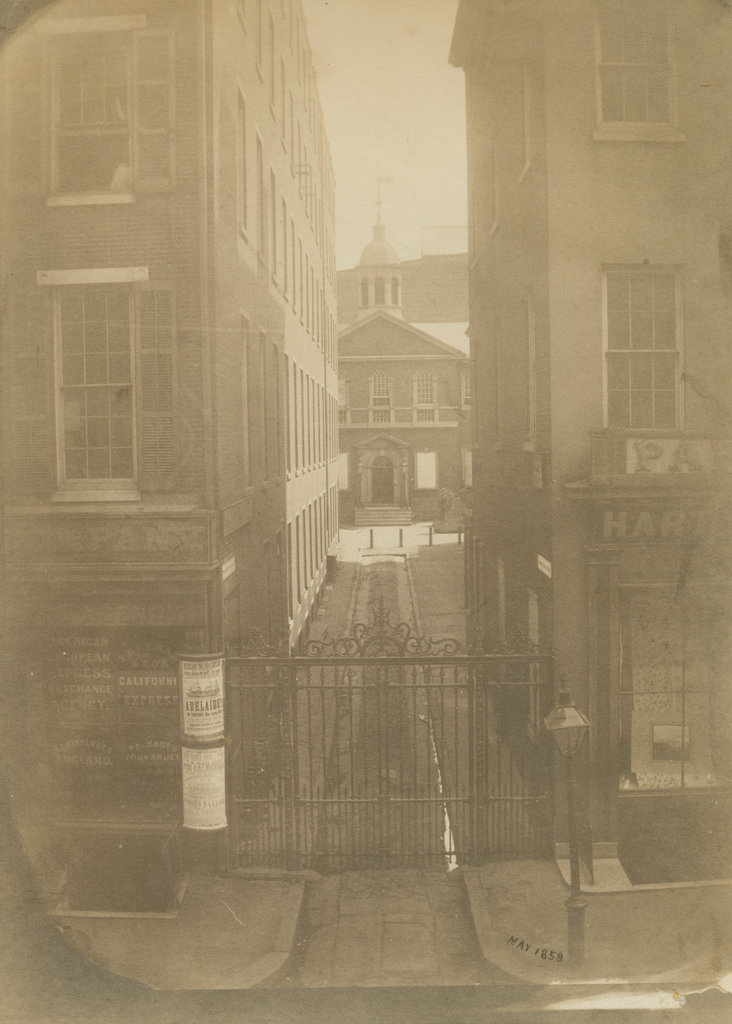 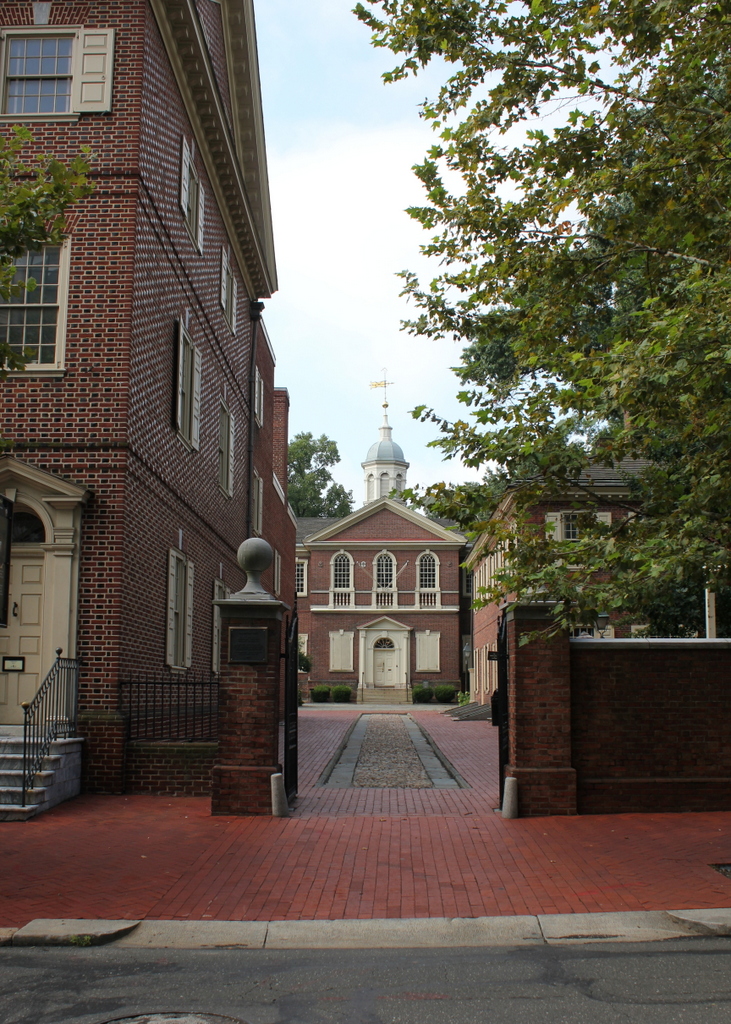 One of the many important Revolutionary War-era landmarks in Philadelphia is Carpenters’ Hall, shown here in these two photos. Despite its rather unusual location at the end of a narrow alley in the midst of a city block, this building played an important role as the meeting place of the First Continental Congress, which convened here in September and October 1774. This gathering was attended by many of the future Founding Fathers, and it marked the first time that the various American colonies gathered together in response to grievances against the British government.

As is suggested by its name, Carpenters’ Hall was—and still is—owned by the Carpenters’ Company of the City and County of Philadelphia, a craft guild comprised of the city’s architects and builders. The building was designed by one of its members, the prominent architect Robert Smith, and the construction work began in 1770. It was not completed until 1775, but it was finished enough to allow its use as a meeting space as early as 1773. Then, in 1774, when the delegates arrived here in Philadelphia, they selected the building as their meeting space. John Adams described it in his diary on September 5, the first day that the First Continental Congress was in session:

At Ten, The Delegates all met at the City Tavern, and walked to the Carpenters Hall, where they took a View of the Room, and of the Chamber where is an excellent Library. There is also a long Entry, where Gentlemen may walk, and a convenient Chamber opposite to the Library. The General Cry was, that this was a good Room, and the Question was put, whether We were satisfyed with this Room, and it passed in the Affirmative. A very few were for the Negative and they were chiefly from Pensylvania and New York.

The convening of the First Continental Congress was largely motivated by the Intolerable Acts that the British had passed against Massachusetts, in response to the Boston Tea Party of 1773. Although the other colonies were not directly affected by these measures, which included closing the port of Boston and dissolving the colonial legislature, the Intolerable Acts raised fears in other colonies that their liberties could similarly be revoked by Parliament. A total of 12 colonies sent delegates to the Continental Congress, with only Georgia declining to participate.

The delegates who met here at Carpenters’ Hall included many leaders who would subsequently go on to play active roles in the American Revolution. The most notable of these were George Washington of Virginia and John Adams of Massachusetts, but other prominent delegates included Samuel Adams of Massachusetts, Roger Sherman of Connecticut, John Jay of New York, and Patrick Henry. However, despite the presence of radical figures like Samuel Adams and Patrick Henry, the assembly also included many moderates who opposed separation from Britain, including Isaac Low of New York and Joseph Galloway of Pennsylvania, both of whom ultimately became loyalists during the American Revolution.

At this point, few delegates were prepared to embrace political independence from Great Britain, so the First Continental Congress ultimately took a moderate stance. The delegates approved the Declaration and Resolves, which outlined colonial grievances against Britain, and they also created the Continental Association, an agreement that involved boycotting British goods while also threatening to ban exports to Britain if the Intolerable Acts were not repealed by the following September. In addition, they agreed to reconvene on May 10, 1775, as what would become the Second Continental Congress.

The First Continental Congress adjourned on October 26, 1774. When the delegates to the Second Continental Congress arrived here in Philadelphia just over six months later, they met in the Pennsylvania State House, now known as Independence Hall, rather than the much smaller Carpenters’ Hall. Aside from a different physical location, the Second Continental Congress also faced very different circumstances, as the American Revolution had begun just three weeks earlier with the battles of Lexington and Concord. The outbreak of war made it more difficult for the moderate delegates to continue advocating reconciliation, as shown by the harsh British response to the Olive Branch petition, and it would eventually lead to Congress famously declaring independence in 1776.

In the meantime, Carpenters’ Hall continued to be used by the Carpenters’ Company, but it also served a number of other roles during and after the Revolution. The Continental Army used it as a hospital and as storage for military supplies, and the British similarly used it as a hospital during their occupation of the city. Then, in 1790, when Philadelphia temporarily became the national capital, Secretary of War Henry Knox had his offices here in this building. A year later, the Carpenters’ Company built a second building here on this site, known as New Hall. The group moved their headquarters to this building, and Knox likewise moved his offices there. However, the Carpenters’ Company continued to rent out their original building to various tenants.

From 1791 to 1793, Carpenters’ Hall was occupied by the Bank of North America, and it subsequently became the temporary home of the First Bank of the United States from 1794 until 1797, when its permanent facility was completed about 50 yards to the east of here. The building’s next tenant was the Bank of Pennsylvania, and in 1798 it became the site of a major bank heist when thieves stole over $160,000 from the vaults. However, one of the men died just a few days later from yellow fever, and the other one was later arrested after attempting to deposit some of his stolen loot here at the bank that he had robbed.

During the early 19th century, Carpenters’ Hall served as the Philadelphia Custom House, and then from 1816 to 1821 it was the home of the Second Bank of the United States, which was located here during the construction of its own building on Chestnut Street. Several other organizations used the building in the 1820s, including the Philadelphia College of Pharmacy, the Musical Fund Society, and the Franklin Institute. Then, starting in 1828 it was rented by auctioneer C. J. Wolbert & Co., who used the building as his auction hall.

Carpenters’ Hall would remain in use as an auction house for nearly 30 years, but by the mid-19th century some began to lament the fact that such a historic building was being used for such base commercial purposes. In 1848, historian Benson J. Lossing visited the building, which at the time bore a banner on the façade advertising for Wolbert’s company. Lossing subsequently wrote about how the “very Temple of Freedom” was covered in the “placards of grovelling Mammon.” Continuing the biblical imagery, he challenged the people of Philadelphia, asking “[i]s there not patriotism strong enough in Philadelphia to enter the temple, and ‘cast out all them that buy and sell, and overthrow the tables of the money-changers?’”

The Carpenters’ Company ultimately chose to heed his words, and drove out the money-changers, in the metaphorical sense. In 1856, they voted to not renew Wolbert’s lease, and when he left the organization began restoring the building to its original appearance. It was rededicated on September 5, 1857, on the 83rd anniversary of the opening of the First Continental Congress. Reporting on the event the next day, the Sunday Dispatch praised the restoration of the building, writing about how the Carpenters’ Company,

determined that henceforth the old Hall should go into a respectable and dignified retirement, and that for the food it had already done, it should no more be the scene of traffic. The society have fitted the ancient Hall up in handsome style, and, while doing so, they have adhered as closely as practicable to the original plan of the building, and Carpenters’ Hall is now nearly in the same condition it was in when the historical events occurred which gave it importance.

The first story, in which the first Continental Congress assembled, has been grained in imitation of oak, and such articles of new furniture as it was necessary to procure, have been made in a style to comport with the ancient relics preserved in the building, and which tradition says were used there by Congress in 1774. . . .

The Carpenters’ Society intend keeping the Hall sacred for the future, and citizens and strangers will be afforded an opportunity of visiting and inspecting this relic of the most interesting period of the city’s history.

The upper part of the building has been handsomely fitted up with a library and meeting room for the members of the society, and with rooms for the residence of the janitor and his family. In the library are several of the original fire buckets which belonged to the hall before the introduction of a hose.

Outside the Hall, in front of the building, a neat grass plot and flower beds have been laid out, and handsome lamps occupy the sides of the main entrance. The inside of the building has also been supplied with elegant and appropriate chandeliers, brackets, &c., which were designed purposely by their manufacturers.

The first photo was taken less than two years later by Frederick De Bourg Richards, as part of an effort to document Philadelphia’s historic buildings. It shows the north side of the building, looking down the narrow alley connecting it to Chestnut Street. The buildings in the foreground hide much of Carpenters’ Hall, and the one on the right also blocks the view of New Hall, which stood just to the northwest of Carpenters’ Hall. These modern buildings provide an interesting contrast to the old colonial-era landmark, in particular the advertisements for California-bound steamships, which indicate just how much the nation had changed since the First Continental Congress convened here less than a century earlier.

Today, more than 160 years after the first photo was taken, much of this scene has changed. At some point New Hall was demolished, as were the commercial buildings in the foreground. Some of these may have been demolished as part of the creation of the Independence National Historical Park, which involved the removal of most 19th century buildings across several city blocks. However, Carpenters’ Hall itself is still standing in the distant center of this scene. It is still owned by the Carpenters’ Company, and it is open to the public with free admission. In the present-day scene, it is joined here by a 1960s reconstruction of New Hall on the right, which now serves as the New Hall Military Museum, and on the left by the Pemberton House, a 1960s reconstruction of a colonial-era mansion.