Independence Hall, seen from the north side across Chestnut Street in Philadelphia, around 1900. Image courtesy of the Library of Congress, Detroit Publishing Company Collection. 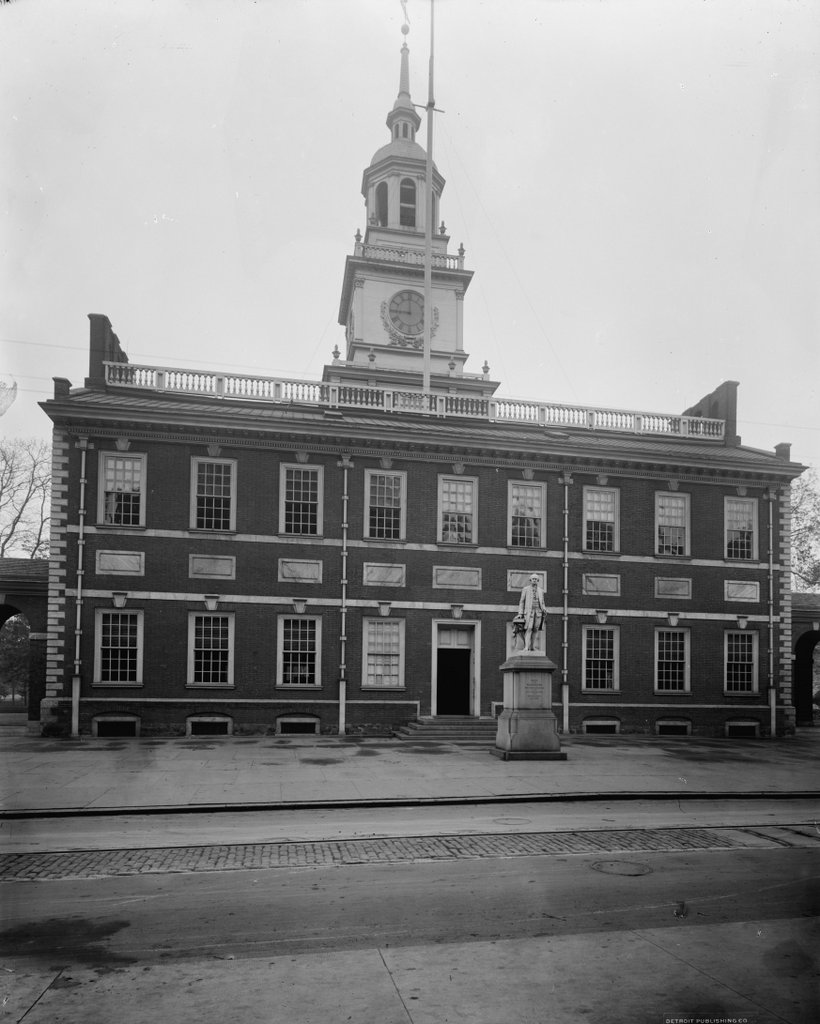 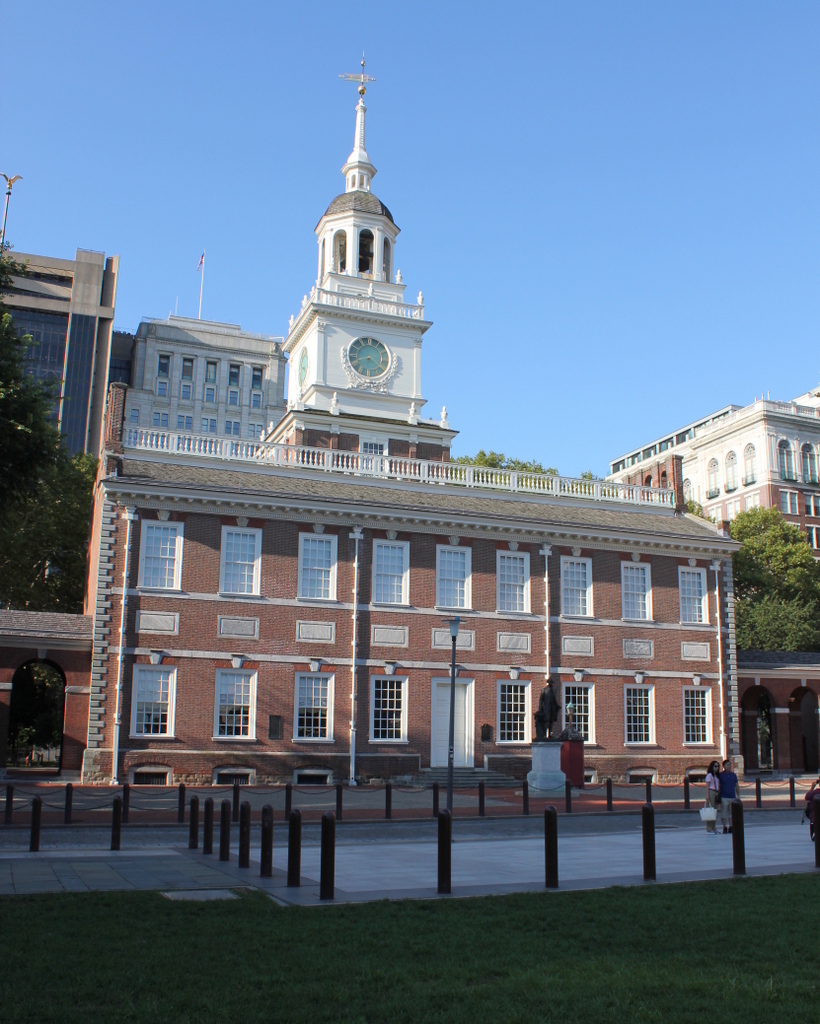 Independence Hall is one of the most important historic sites in the country, having been the place where both the Declaration of Independence and the Constitution were debated and signed. It served as the de facto capitol building of the United States from 1775 until 1783, but the building predates the American Revolution by several decades. Construction had begun in 1732, coincidentally the same year as George Washington’s birth, although it would be another 21 years before it was finally completed in 1753 as Pennsylvania’s first state house. It was built of brick, with Georgian-style architecture, and it featured the main building in the center, with a clock tower on the south side of it and wings to the east and west.

The Pennsylvania State House, as it was then known, was used by the Pennsylvania Provincial Assembly in the years leading up to the American Revolution, but starting in 1775 it was also put to use as the meeting place of the Second Continental Congress, which convened here on May 10 of that year. The war had begun less than a month earlier, with the Battles of Lexington and Concord in Massachusetts, and one of the early actions taken by the Congress was to create a Continental Army and appoint one of its own members, George Washington, to become commander. However, the Congress also attempted to bring about a reconciliation with Britain, sending the Olive Branch Petition to King George III in July.

Support for independence was by no means universal among the delegates of the Second Continental Congress, and it would take more than a year of war, along with the crown’s rejection of their peace overtures, before they finally agreed to declare independence. The vote on the resolution occurred here on July 2, 1776, and it passed without opposition. Writing to his wife Abigail a day later, John Adams predicted:

The second day of July, 1776, will be the most memorable epoch in the history of America. I am apt to believe that it will be celebrated by succeeding generations as the great anniversary festival. It ought to be commemorated as the day of deliverance, by solemn acts of devotion to God Almighty. It ought to be solemnized with pomp and parade, with shows, games, sports, guns, bells, bonfires, and illuminations, from one end of this continent to the other, from this time forward forever more.

Adams would prove correct about everything except for the date. Although the resolution passed on July 2, the actual text of the Declaration was not approved until two days later, so July 4 was ultimately recognized as Independence Day. However, John Trumbull’s famous painting notwithstanding, the document does not appear to have been actually signed on July 4. Historians generally identify August 2 as the date when most delegates signed, although others would add their signatures in the subsequent months, including New Hampshire’s Matthew Thornton, who did not arrive in Philadelphia until November.

The Declaration of Independence asserted the new country’s sovereignty, although it would take another seven years of war before this fact was recognized by the British. Throughout this time, the Continental Congress continued to meet here in Independence Hall, although its stay was interrupted by two British occupations of Philadelphia. Congress evacuated the city in December 1776, returned in March 1777, and left again in September. It would not return here again until July 1778, and during these interim periods it met in Baltimore, Lancaster, and York. It was during its stay in York that the Congress adopted the Articles of Confederation, which would become the first national constitution. However, the Articles required unanimous support, and it did not go into effect until the last state, Maryland, signed the document here in Independence Hall in 1781.

Under the Articles of Confederation, the national government consisted of a unicameral legislature that is now usually referred to as the Congress of the Confederation. It was the successor to the Continental Congress, and it met here for the next two years. However, in June 1783 Congress was again compelled to evacuate Philadelphia. This time, though, it was not in the face of an invading British army, but rather an angry mob of about 400 American soldiers who were demanding payment for their wartime service. Congress had asked for assistance from the Supreme Executive Council of the Commonwealth of Pennsylvania, which also met here in this building, but the council refused to call the state’s militia to suppress the riot. As a result, Congress left here on June 21, and reconvened nine days later at Nassau Hall in Princeton.

The Congress of the Confederation would never return to Philadelphia, and instead it met variously in Princeton, Annapolis, Trenton, and New York City over the next six years. However, Independence Hall did play one more important role in American government in 1787, when it became the meeting place for the Constitutional Convention. By this point, it had become clear that the Articles of Confederation were inadequate for effectively governing the country, so delegates from 12 states gathered here starting on May 25, with the stated purpose of “revising” the Articles.

It did not take the convention delegates long to realize that they needed to write a new constitution, as opposed to simply revising the existing one, although this prompted significant debate on issues such as how states should be represented in the legislature, and whether slaves should be counted toward a state’s population. The result was a constitution that was filled with compromises, creating a national government that was much stronger than the one under the Articles of Confederation, while at the same time reserving a significant amount of authority to the states. In all, the convention lasted just under four months, and the final document was signed here on September 17, 1787.

The Constitution went into effect in 1789, and a year later the new federal government returned to Philadelphia, where it would remain for the next 10 years before permanently relocating to Washington, D.C. However, instead of using Independence Hall, Congress met in a new building located immediately to the west of here, at the corner of Chestnut and 6th Streets. Around the same time, the U.S. Supreme Court moved into a matching building on the other side of Independence Hall, at the corner of 5th Street.

Philadelphia lost its role as the national capital in 1800, but a year earlier it had also lost the state capital, when the state government moved to Lancaster. This left Independence Hall without any governmental use, although during the early 19th century the second floor housed a natural history museum and portrait gallery that was run by artist Charles Willson Peale. The building’s exterior also changed during this time, starting with the removal of the original wooden steeple in 1781. It had become badly deteriorated by that point, and it was not immediately replaced; instead, the brick tower was topped with a low roof. Another major change came in 1812, when the original wings were demolished and replaced by new buildings along Chestnut Street.

Independence Hall itself also faced potential demolition, but this threat was averted when the city of Philadelphia purchased the property from the state in 1816. Over time, the building came to be known as Independence Hall, rather than the State House, and in 1825 the square on the south side was named Independence Square. Then, in 1828, the exterior was restored with the addition of a new steeple, which was designed by architect William Strickland. It was based on the design of the original one, but it had some differences, including the addition of a clock. Unlike its predecessor, which lasted less than 30 years before rotting away, Strickland’s steeple is still standing atop the tower nearly two centuries later.

During the 19th century, the building came to be recognized as a major symbol of the American Revolution, and over the years both it and the surrounding grounds were the site of countless patriotic events and public demonstrations. Perhaps the first came in 1824, when the Marquis de Lafayette was received here during his farewell tour of America, but subsequent speakers and demonstrators included Frederick Douglass, Abraham Lincoln, Susan B. Anthony, and various labor unions, all of whom sought to connect their connect their causes to the ideals that the Founding Fathers had expressed here.

By the time the first photo was taken at the turn of the 20th century, the exterior of the building had undergone another change. The 1812 wings were demolished in 1898, and were replaced with replicas of the originals, including the arched brick arcades that connected the wings to the main building. Another change to this scene came in 1869, when a marble statue of George Washington was installed here in front of Independence Hall. It was the work of sculptor Joseph A. Bailly, and it appears in the first photo. However, by the early 20th century it had begun to deteriorate, and in 1910 it was replaced with a bronze copy, which still stands here today.

More than a century after the first photo was taken, the statue remains the only significant change to this scene. Independence Hall remains well-preserved, and it stands as the focal point of the Independence National Historical Park, which was established in 1948. It has also been designated as a National Historic Landmark, and it is one of only 24 UNESCO World Heritage Sites in the United States. The building is open to the public for guided tours, and it is one of the most popular tourist attractions in the northeast, with over 4 million visitors to the park each year.