Looking north on the Lexington Common from near the corner of Bedford Street and Harrington Road, around 1900. Image courtesy of the Library of Congress, Detroit Publishing Company Collection. 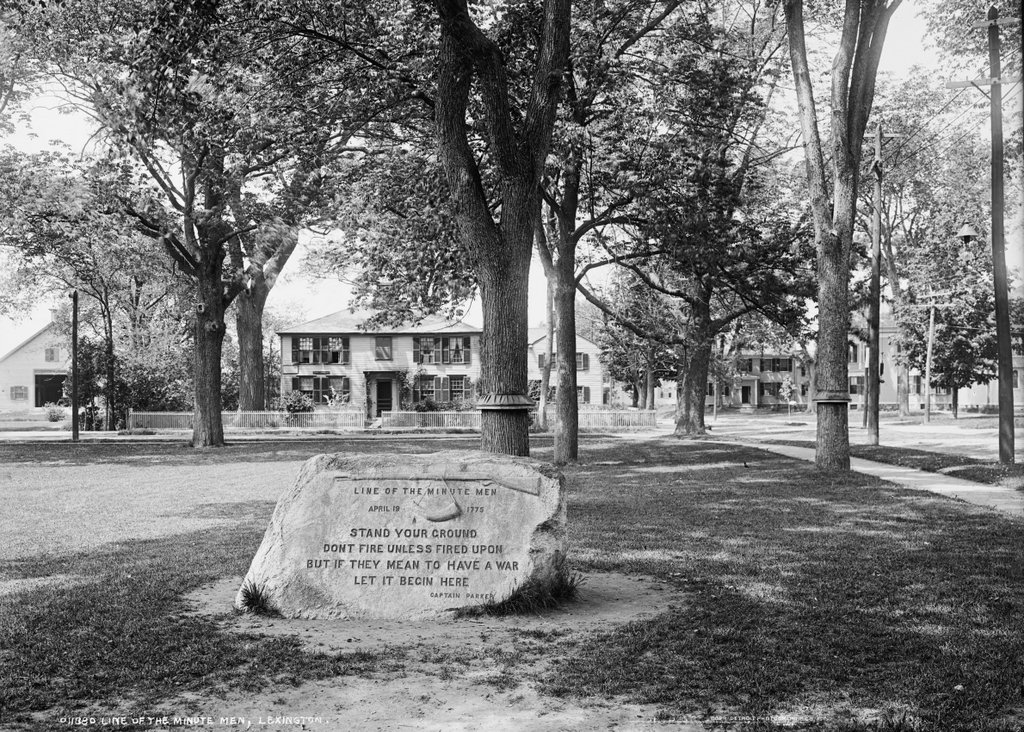 The scene around 1910-1915. Image courtesy of the Library of Congress, Detroit Publishing Company Collection. 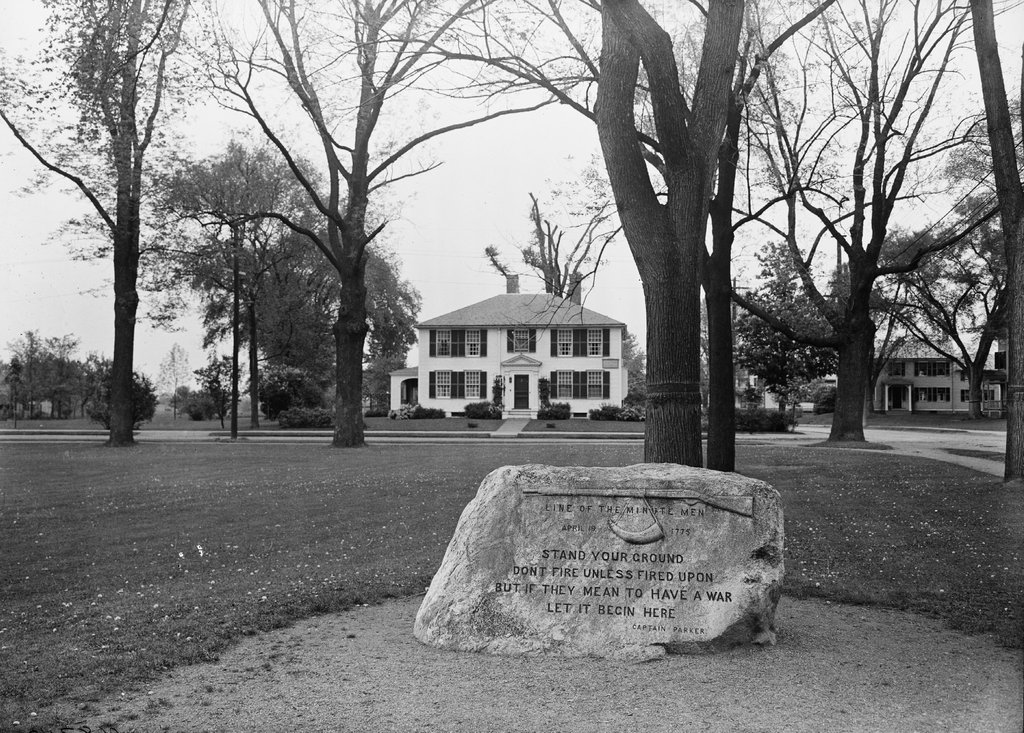 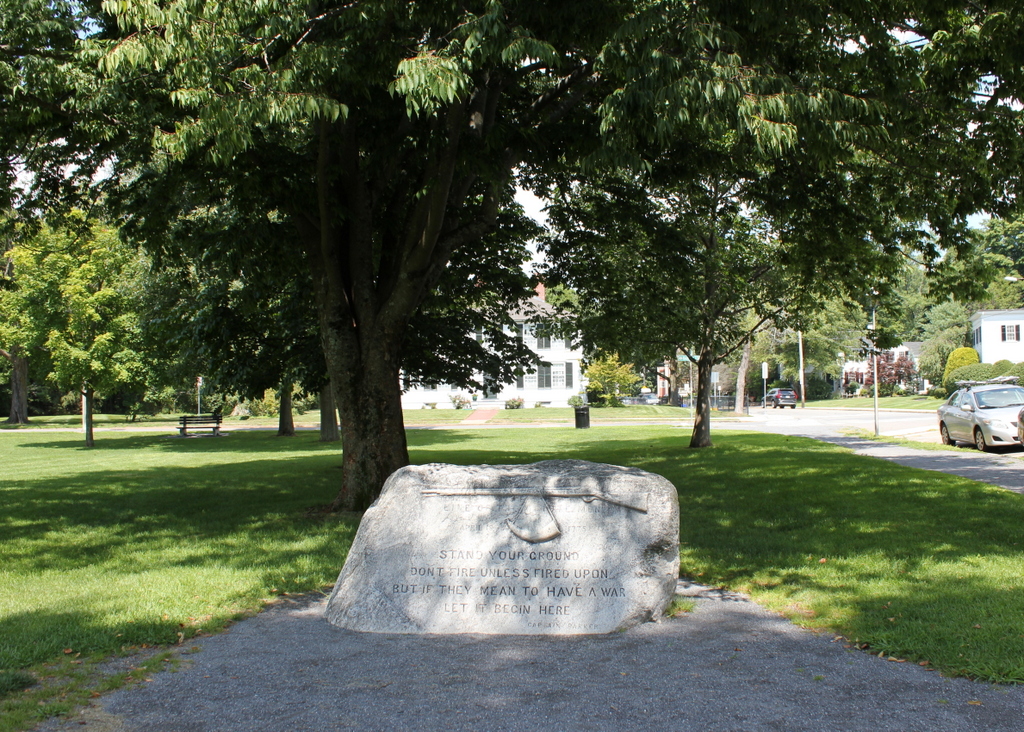 These photos show a portion of the Lexington Common, which is also known as the Lexington Battle Green. Nearly every New England town has some sort of a common in the center of town, yet this one in Lexington is one of the most famous. It was here, just after dawn on April 19, 1775, that the first shots of the American Revolution were fired, and where eight Lexington militiamen were killed after a brief skirmish with British redcoats who were bound for Concord.

The British soldiers had departed Boston late in the previous evening, with the goal of seizing colonial military supplies that were being stored in Concord. This prompted Paul Revere and other messengers to make their famous midnight ride, alerting the militia companies in the outlying towns. Here in Lexington, a force of about 80 militiamen assembled on the Common. They were led by Captain John Parker, who is said to have instructed his men to “Stand your ground. Don’t fire unless fired upon, but if they mean to have a war, let it begin here.”

Upon arrival, the British ordered the militiamen to leave, with Major John Pitcairn supposedly shouting “Disperse, ye villains! Ye rebels, disperse!” Along with Parker’s earlier command, this would become one of the most famous quotes of the war, although it is hard to say exactly how accurate either of these lines really are. This uncertainty may be due, in part, to the fact that both men died within less than five months after the battle, leaving future historians with little opportunity to verify their battlefield statements.

In any case, Captain Parker recognized that his men were vastly outnumbered, and he ordered them to disperse. However, few evidently heard him. Then, in the midst of this standoff, a shot was fired. The identity of the shooter remains unknown, with both sides generally placing blame on the other, but both the redcoats and the militiamen then began exchanging fire.

The British proved to be far more effective in their fire. By the time the brief battle was over and the redcoats had resumed their march to Concord, they left behind eight dead militiamen and ten wounded, compared to just one wounded British soldier. Among the dead was Jonathan Harrington, who lived in the house that is visible in the distant center of all three photos. According to tradition, he was mortally wounded after the battle, but he managed to crawl back to his doorstep, where he died in his wife’s arms.

Despite how short and one-sided the battle was, it marked the first armed resistance to British aggression, and the Lexington Common has become an important symbol of American independence. The common is now marked by several monuments, including the one here in the foreground of this scene. Dedicated in 1884, this boulder marks the line where the militiamen stood, and it is inscribed with Captain Parker’s famous—if possibly apocryphal—command to his men to stand their ground.

The first photo was taken around the turn of the 20th century, and it shows the Harrington house as it appeared prior to a major renovation in 1910. This project, which was completed by the time the second photo was taken, involved the removal of a wing on the right side of the house, along with the replacement of the large central chimney with two smaller ones. It was intended as a restoration, although the work appears to have been based more on early 20th century ideas about how a colonial house should look, rather than how the Harrington house actually looked during the colonial era.

Today, more than a century after the second photo was taken, very little has changed in this scene. The boulder is still here marking the line of militiamen during the battle, and the Harrington house remains standing in the distance, with few major exterior changes since the 1910 alterations. The other house in this scene, visible further in the distance, also survives today, although it is somewhat younger than the Harrington house, dating back to 1820. The Common itself has also been preserved, serving as both a public park and a historic site, and in 1961 it was designated as a National Historic Landmark.