The trolley Elizur Holyoke passing through a rock cut on the Mount Tom Railroad, around 1900-1910. Image courtesy of the Holyoke Public Library. 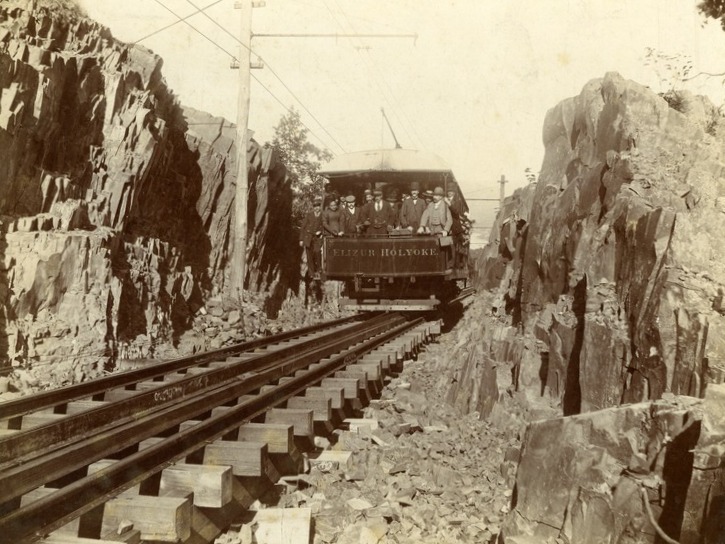 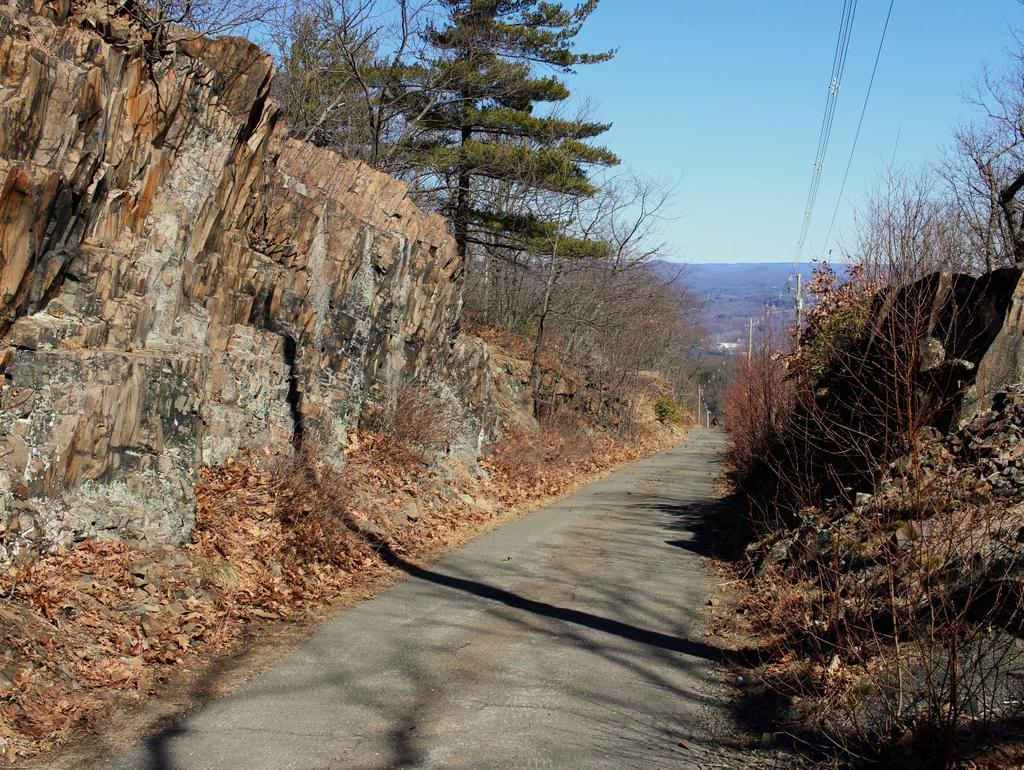 As explained in the previous post, the Mount Tom Railroad was a nearly mile-long funicular railway that brought visitors up to the Summit House at the top of Mount Tom. It opened in 1897, and it featured two trolleys connected by a cable. When one car descended, its weight helped pull the other car up the mountain. Each car also had its own electric motors, powered by overhead wires, which provided additional power to compensate for differences in weight and energy lost to friction. Most of the rail line what a single track, aside from a short turnout at the midpoint to allow the cars to pass.

The railroad rose 700 feet in elevation, with an average grade of 14 percent and a maximum grade of 21.5 percent. The route was mostly straight, although there was a gentle curve near the summit. Along the way, this route required several rock cuts and fills, to maintain a consistent grade. The largest of these cuts is shown here in these photos, about a third of a mile below the summit station. Here, trolleys would pass between two walls of Mount Tom’s distinctive basalt traprock, with its step-like formation.

The first photo shows the trolley Elizur Holyoke, named for the early settler who became the namesake of Mount Holyoke. According to tradition, he and fellow pioneer Rowland Thomas led an expedition up the Connecticut River, with Holyoke traveling up the east side and Thomas on the west side. After reaching an area where the river passes between two mountain ranges, the two men decided to name the eastern one for Holyoke, and the western one for Thomas. Appropriately enough, the other trolley here on the railroad was named the Rowland Thomas.

The Mount Tom Railroad remained in service for about 40 years. Its operating season generally lasted from May through October, and in a typical year would average around 75,000 visitors during the season. Among the most famous of these was President William McKinley, who visited with his wife Ida in 1899 and rode up the mountain on the Elizur Holyoke. Calvin Coolidge and his future wife Grace Goodhue also rode up the railroad in the early 20th century, although with far less fanfare than McKinley had enjoyed, since Coolidge was still an obscure young Northampton lawyer at the time.

The Summit House suffered two disastrous fires, first in 1901 and again in 1929. The second was particularly devastating to the railroad, since its small, hastily-constructed replacement failed to draw the same number of visitors to the summit. This, combined with increased car ownership during the 1920s and the Great Depression of the 1930s, ultimately led to the Summit House and the railroad closing by the late 1930s. In 1938 the Summit House was dismantled, and around the same time the railroad tracks were torn up and removed.

During its many years in operation, the Mount Tom Railroad had a good safety record, and it does not appear to have had any major incidents. However, less than a decade after the railroad closed, this spot here would become the site of a deadly transportation disaster. On the night of July 9, 1946, an Army Air Corps B-17 airplane was en route from Goose Bay, Labrador to Westover Field in Chicopee. The plane had a crew of four, and it also carried 21 passengers who were returning from active duty in Greenland, including 15 Coast Guardsmen, four Army Air Corps servicemen, and two civilians. While attempting to land at the nearby airfield in the dark on a rainy night, the plane instead crashed into Mount Tom, hitting the exposed rock along this section of the railroad grade. The impact disintegrated the plane, killing all 25 men instantly and starting a large fire here. A group of people at nearby Mountain Park climbed up the railroad right-of-way, but they could not get close to the crash scene because of the intense heat, and in any case there was little that they could have done to assist at that point.

Today, more than 80 years after the railroad closed, its route is now a paved access road for the telecommunications towers that occupy the former site of the Summit House. However, there are still remnants of the old railroad along the road, including piles of discarded ties and metal support braces for the utility poles. On a more somber note, however, there are also many remnants of the B-17 crash throughout this area, including pieces of twisted metal and fragments of melted aluminum. The site of the crash is now marked by a monument that is inscribed with the names of the 25 men who died here. It is located about 100 yards in the distance, atop a rocky outcropping on the left side of the road. The monument itself is not visible in the present-day photo, but it can be reached via a short path that starts at the green bush in the distant center of the photo.