The trolley Elizur Holyoke approaching the summit on the Mount Tom Railroad, around 1905-1915. Image courtesy of the Library of Congress, Detroit Publishing Company Collection. 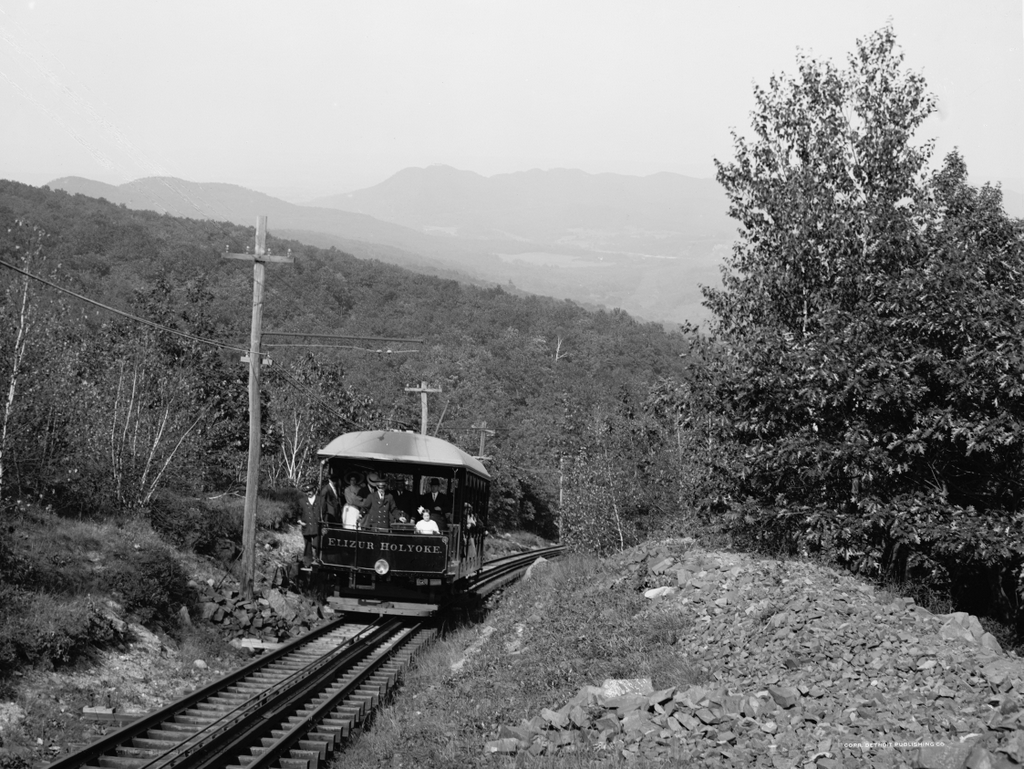 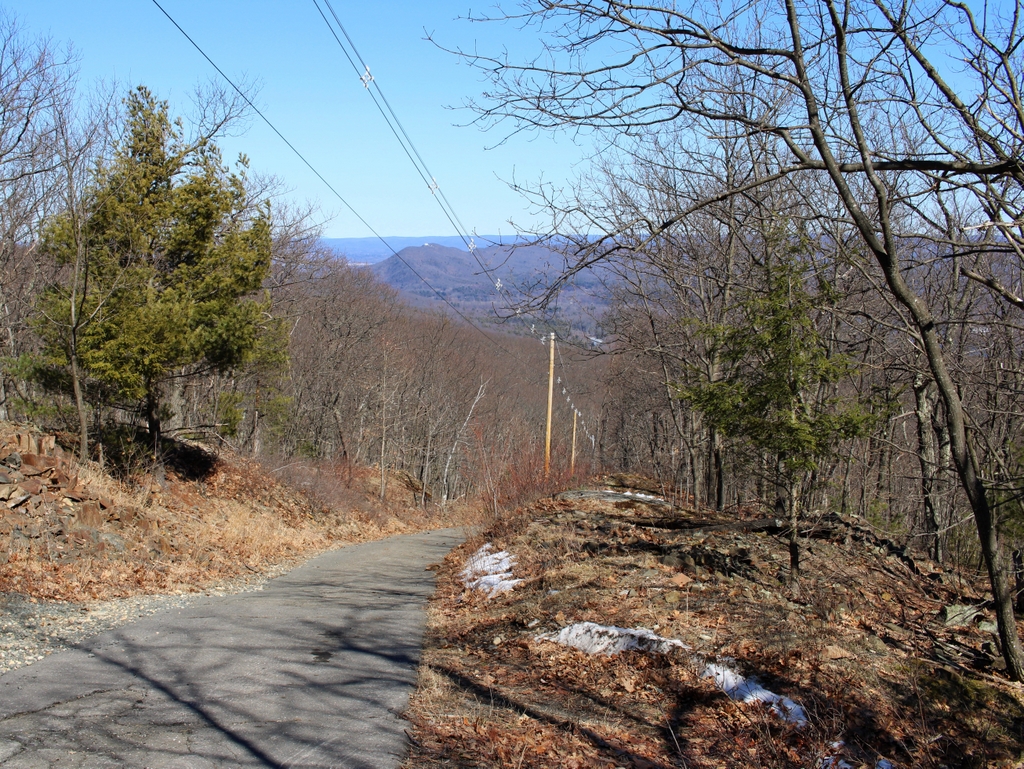 The first photo shows the trolley Elizur Holyoke, one of two that operated on the Mount Tom Railroad. Together with the Rowland Thomas, these two cars formed a funicular railway; they were connected by a cable that allowed the descending car to use its weight to help pull the other one up the mountain. This cable, which is seen in the foreground in the middle of the tracks in the first photo, was not powered by a motor at the summit, but instead each car had its own motors, which drew power from overhead wires by way of a trolley pole, as shown atop the Elizur Holyoke in the photo.

The Mount Tom Railroad opened in 1897, allowing visitors to reach the newly-constructed Summit House atop the 1,200-foot Mount Tom. It was just under a mile in length, and it rose 700 feet in elevation, with an average grade of 14 percent and a maximum of 21.5 percent. Most of the route was straight, with the exception of a curve near the summit, which is shown here in this scene. The cars typically ran once every half hour, although they could be operated more frequently depending on demand. Each car could seat 84 passengers, and over the course of an average season the railroad typically carried about 75,000 people to and from the summit.

Aside from the railroad itself, this scene also offers a view of the northernmost portion of the Mount Tom Range, along with part of the Holyoke Range. Appropriately enough, the first photo shows the Elizur Holyoke directly below Mount Holyoke. Both the mountain and the trolley share the same namesake, and the mountain also lent its name to the city of Holyoke, where Mount Tom is located. Further to the left of Mount Holyoke is Mount Nonotuck, which is visible near the upper left corner of the first photo.

When the railroad and Summit House here on Mount Tom opened in 1897, both of these mountains already had long-established hotels at their summits, with the Prospect House on Mount Holyoke and the Eyrie House on Mount Nonotuck. Unlike those businesses, though, the Summit House did not offer overnight accommodations, and instead catered entirely to day visitors. In any case, the aging Eyrie House was never a major competitor to the Summit House, and it ultimately burned in 1901. As for the Prospect House, its 20th century history would largely mirror that of the Summit House, and both ultimately closed in the late 1930s amid declining business during the Great Depression.

The Summit House was demolished around 1938, and the railroad tracks were removed around the same time. Then, in 1944 the property was sold to the radio station WHYN, which built towers and buildings at the summit and converted the railroad right-of-way into a paved access road. Overall, though, this scene has not changed much, aside from the loss of the railroad tracks. The slopes of Mount Tom still look much the same as they did when the first photo was taken, as do the mountains in the distance, although some are obscured by tree growth in the present-day photo. Even the Prospect House on Mount Holyoke is still standing, and it is barely visible as a tiny white speck just to the left of the summit in both photos. Now preserved as a museum, this historic building is one of the few surviving 19th century mountaintop resorts in the northeast, having long outlived its newer competitors on Mount Nonotuck and here on Mount Tom.