The Sphinx at Mount Auburn Cemetery in Watertown, around 1900-1906. Image courtesy of the Library of Congress, Detroit Publishing Company Collection. 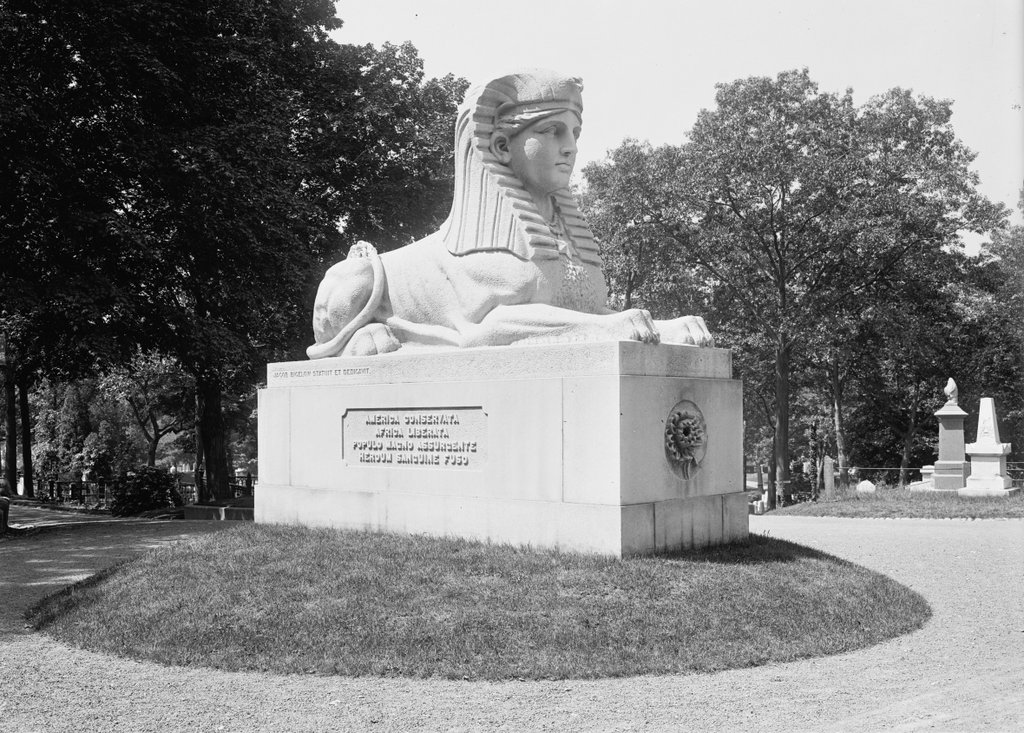 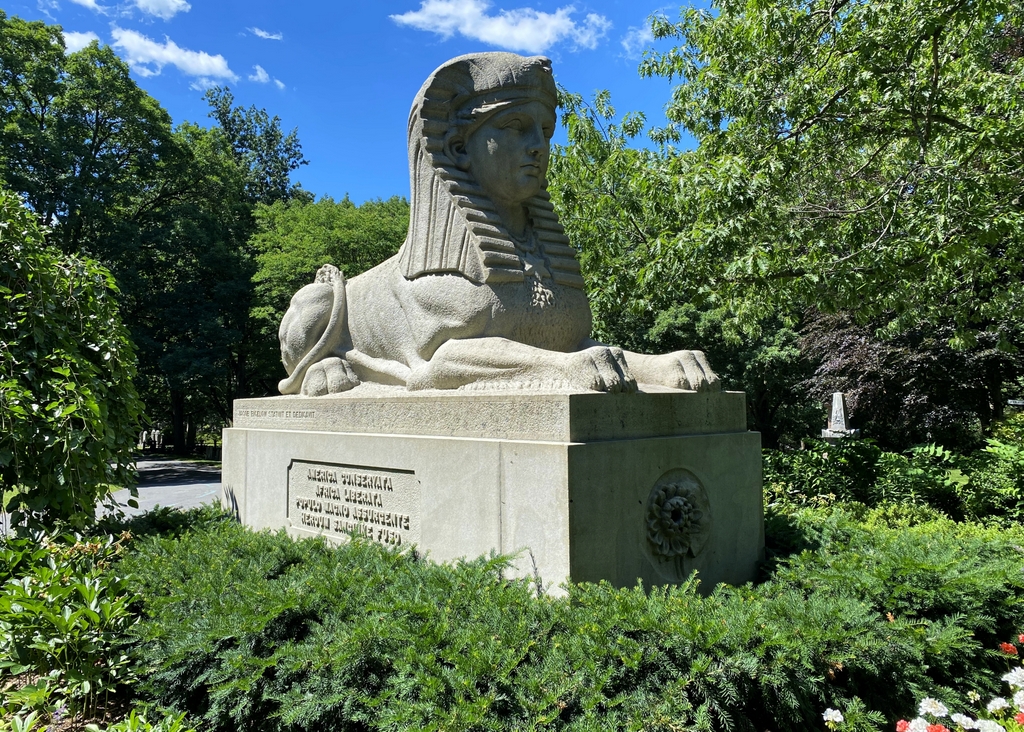 Civil War monuments are a ubiquitous feature in towns throughout New England. Most of these were dedicated in the late 19th century, and their designs typically consist of a soldier in uniform, standing atop a pedestal that is inscribed with names of battles, patriotic sentiments, or similar statements. However, perhaps the most unusual Civil War monument in the region is the Sphinx, located here in Mount Auburn Cemetery. It was commissioned by Dr. Jacob Bigelow and designed by prominent sculptor Martin Milmore, and it was installed in 1872, on a site directly across from the cemetery chapel.

Jacob Bigelow was a prominent Boston physician who, in the early 19th century, proposed the idea of a rural, park-like cemetery on the outskirts of Boston. The result was Mount Auburn Cemetery in Watertown and Cambridge, which opened in 1831. This carefully-landscaped cemetery was a sharp contrast to the grim, overcrowded colonial-era graveyards in downtown Boston, and it served as a model for many similar cemeteries that would subsequently be opened across the region during the mid-19th century.

In the aftermath of the Civil War, Bigelow wanted to create a monument in the cemetery that would celebrate the two main accomplishments of the war: the preservation of the union, and the end of slavery. However, rather than a standard soldier-with-gun-atop-pedestal design, Bigelow envisioned a sphinx, which represented the combination of intellect and strength. He also saw this ancient symbol as being a representation of the nation’s future potential, as he explained in his remarks to the cemetery’s trustees in 1871:

It essays to express the present attitude and character of a nation perhaps as far remote in time from the building of the pyramids as was that event from the earliest constructions attempted by man. The same ideal from which, as it were, on the dividing ridge of time, has looked backward on unmeasured antiquity, now looks forward to illimitable progress. It stands as a landmark of a state of things which the world has not before seen—a great, warlike and successful nation, in the plentitude and full consciousness of its power, suddenly reversing its energies, and calling back its military veterans from bloodshed and victory to resume the still familiar acts of peace and good will to man. What symbol can better express the attributes of a just, calm and dignified self-reliance than one which combines power with attractiveness, the strength of a lion with the beauty and benignity of woman?

The resulting statue was carved of Hallowell granite, and it sits atop a base with an American water lily on the front, and an Egyptian lotus on the back. On either side is an inscription, which is written in Latin on the left side and in English on the right side. The English translation reads:

Despite—or perhaps because of—its unconventional design, the Sphinx appears to have been well-received by contemporary observers. Writing shortly after it was installed here, the Boston Daily Evening Transcript remarked:

The Mount Auburn Sphinx has solved her own riddle, and stands upon her everlasting base at last. She is intended to commemorate the war and the heroes it cost us, and if the peril of art in such commemoration has been the falling into a monotonous sameness and peopling New England with statues of the “private soldier at rest,” that peril has in this case been notably avoided. It is certainly unique, and certainly not grotesque. Egyptian art has long been laid under contribution for expressions of reverence for the memory of the dead.

The first photo was taken about 40 years later, showing the Sphinx at the turn of the 20th century. Since then, very little has changed here aside from the landscaping around the base of the pedestal. Mount Auburn Cemetery still has the same park-like appearance that Bigelow had worked to create, and his Sphinx remains one of its most distinctive features, along with being a remarkably innovative way of memorializing the Union soldiers of the Civil War.