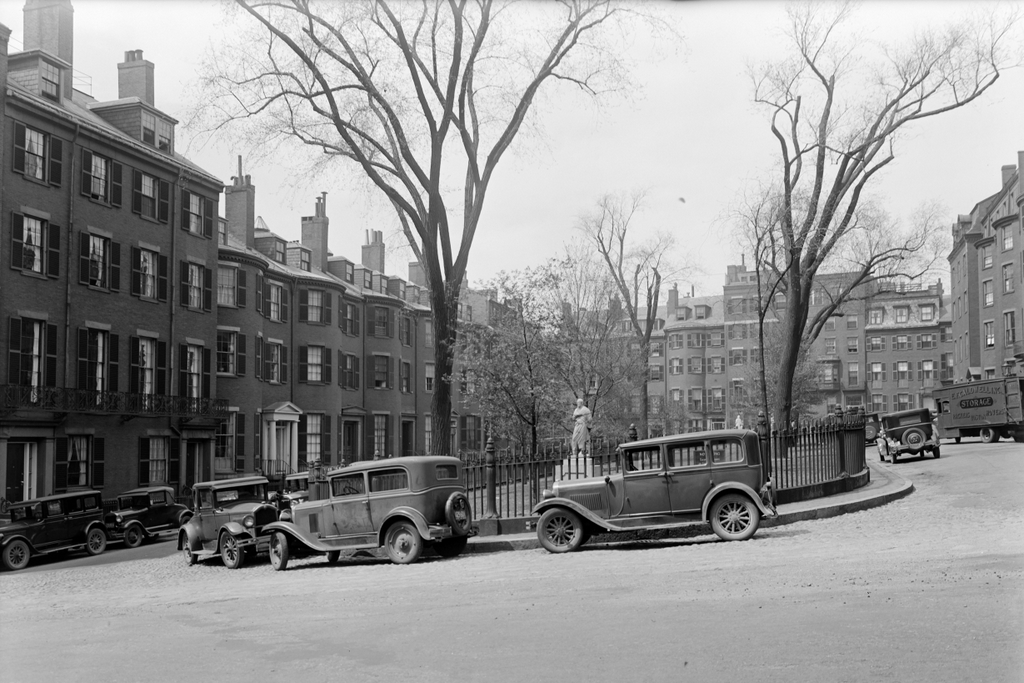 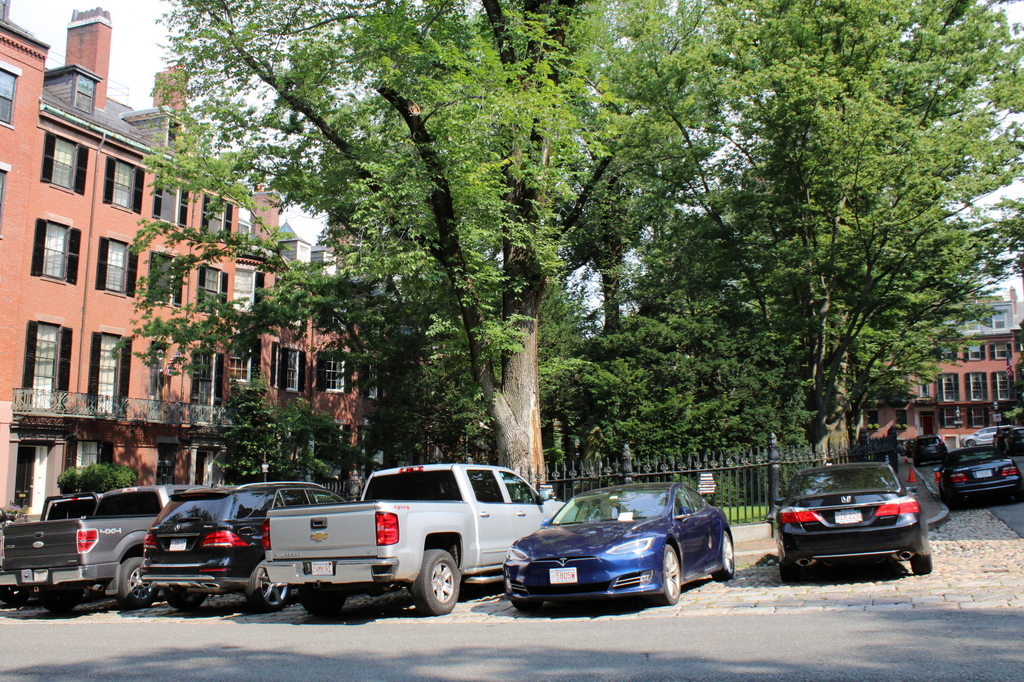 Beacon Hill is one of the best-preserved neighborhoods in Boston, and it generally consists of narrow streets lined with brick rowhouses. However, the one exception to these narrow streets is here at Louisburg Square, a long, narrow park that extends from Mount Vernon Street to Pinckney Street. The square was laid out as part of development of Beacon Hill during the 1820s, and the houses around it were constructed in the 1830s and 1840s. Like most of the other houses in the neighborhood, they are generally three or four stories tall, and many have bow fronts, including a row of eight bow-fronted houses on the left side of the scene.

As for the park itself, it was one of a number of small urban parks that were laid out in Boston during this period. Some have been lost over time, including the Tontine Crescent on Franklin Street and Pemberton Square just to the east of Beacon Hill, but Louisburg Square has remained largely unchanged since the mid-19th century. The park is privately owned and maintained by the residents of the square, and in 1846 they added the cast iron fence around the perimeter of the park, followed by statues of Aristides the Just and Christopher Columbus in 1850. The square also briefly had a fountain, which was installed in 1850 but removed in 1856.

Over the years, Louisburg Square has had a number of prominent residents, particularly in the literary world. The house at 10 Louisburg Square—the second bow-fronted house from the left in this scene—was the final home of Louisa May Alcott and her father Bronson Alcott. They lived here for several years in the 1880s, until their deaths two days apart in March 1888. Also in the 1880s, novelist William Dean Howells lived at Louisburg Square, first at number 16 in 1882, and then at number 4 from 1883 to 1884. One of the houses near the end of the street, at 20 Louisburg Square, was the home of author and banker Samuel Gray Ward, who was also one of the founders of the Metropolitan Museum of Art. In 1852, prominent Swedish opera singer Jenny Lind married her husband, Otto Goldschmidt, in this house. Much more recently, prominent Louisburg Square residents include former U.S. Senator and Secretary of State John Kerry, who lives in the house on the right side at the far end of the street.

By the time the first photo was taken in 1930, the houses on Louisburg Square were already nearly a century old, yet not much had changed here in the intervening years, aside from the addition of automobiles on the streets around the square. Today, nearly a hundred more years have gone by, and still Louisburg Square has remained well-preserved. It is the centerpiece of the Beacon Hill neighborhood, and all of the houses in this scene are now part of the Beacon Hill Historic District, which was designated as a National Historic Landmark district in 1962.