The view looking west on Merrimack Street from Kearney Square, around 1908. Image courtesy of the Library of Congress, Detroit Publishing Company Collection. 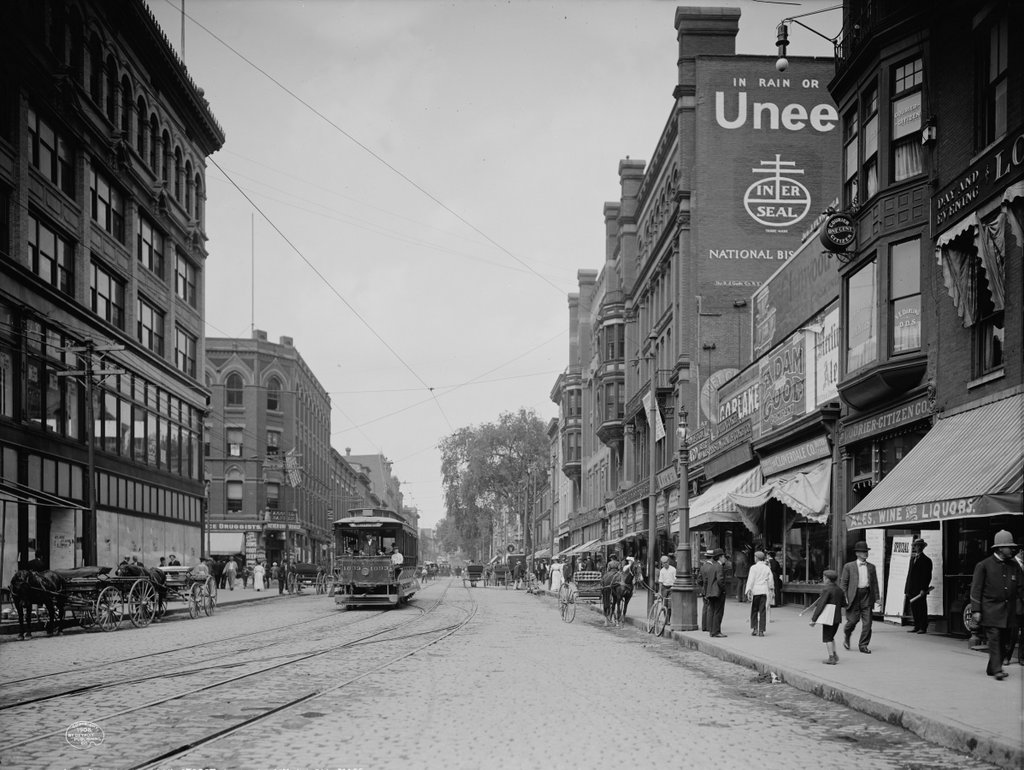 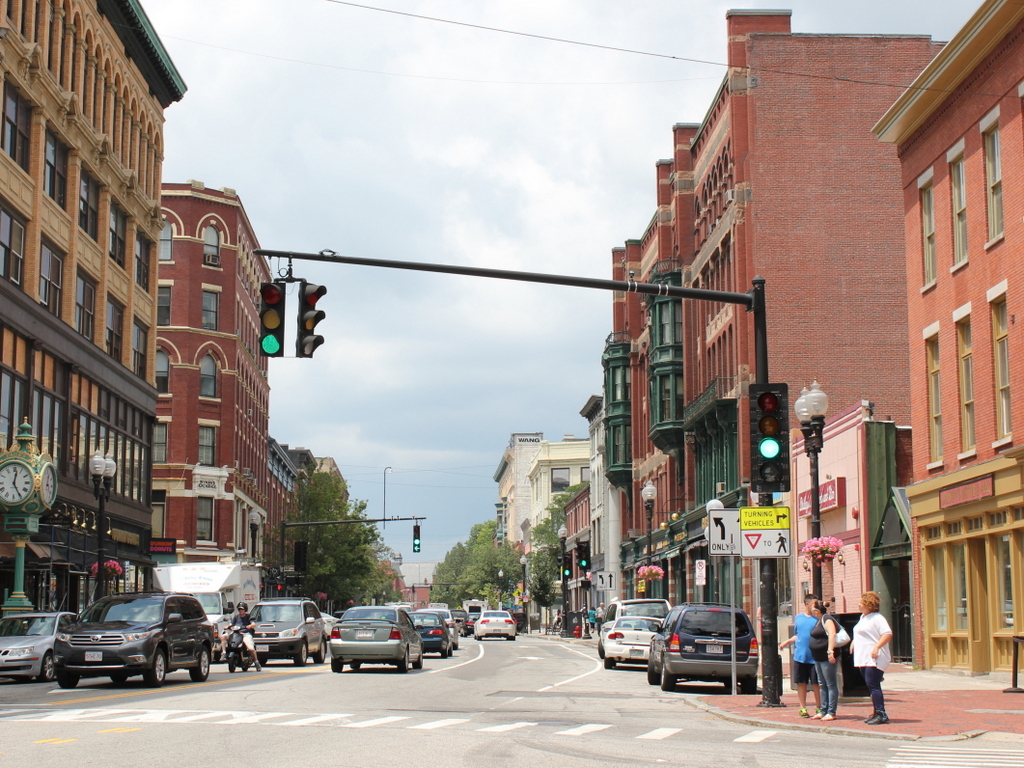 These views show the same section of Merrimack Street as the ones in this post, just from the opposite direction.  This area has long been the commercial center of the city, and it saw significant development in the late 19th and early 20th centuries.  Since then, however, there haven’t been many major changes, so this stretch of Merrimack Street is lined on both sides with a number of historic buildings, including three prominent ones that appear in both of these photos: the Colonial Building (1906) on the far left, the Wyman’s Exchange (c.1880) just beyond it, and the massive Hildreth Building (1882) on the opposite side of the street.

The Colonial Building is one of the newest buildings in this scene, and in the 1908 photo it looks like the finishing touches aren’t complete yet, because the storefront windows are still covered in paper.  It was built on the site of Barristers’ Hall, a church-turned-lawyer’s office that had been built in 1843 and burned down in 1905.  The owner, Joseph L. Chalifoux, was a clothing merchant who rebuilt the site and leased the new building to Nelson’s, a five and ten cent store that was probably in the process of opening when the first photo was taken.  Since then, the building was expanded in 1929, and has continued to house retail space and commercial offices, enjoying a prominent location on the corner of Merrimack and Central Streets.

On the other side of Central Street is Wyman’s Exchange, which replaced an earlier building of the same name that was built in the 1830s.  Over the years, a number of businesses have used the storefronts along the Central and Merrimack Street sides, with the upper floor being used for professional offices such as lawyers, doctors, and dentists.  The one major change that has occurred since the first photo was taken was the addition of a fifth and sixth floor atop the original building.  The upper floors match the rest of the building, and it was probably done soon aftert he first photo was taken.  Today, aside from being taller by 50 percent, the building retains much of its historic appearance.

The Hildreth Building was built in several stages between 1882 and 1884, beginning with the part closest to the camera.  One of the building’s first tenants was S & H Knox and Company, a five-and-dime store that was still operating out of the building on the left-hand side when the 1908 photo was taken.  Within a few years, the owner of the company would merge with his cousins’ stores to form F.W. Woolworth.  The storefront on the other side was the home of King’s, a clothing company that asks prospective customers “Why not give us a try?” in a sign over one of the windows. In 1908, the east side of the building featured a large advertisement for Uneeda Biscuit, made by the National Biscuit Company.  The biscuits are no longer made today, but the company has since shortened their name to Nabisco, and they still use a variation of the logo seen on the sign.

Merrimack Street in Lowell, looking east from the corner of Kirk Street around 1908. Image courtesy of the Library of Congress, Detroit Publishing Company Collection. 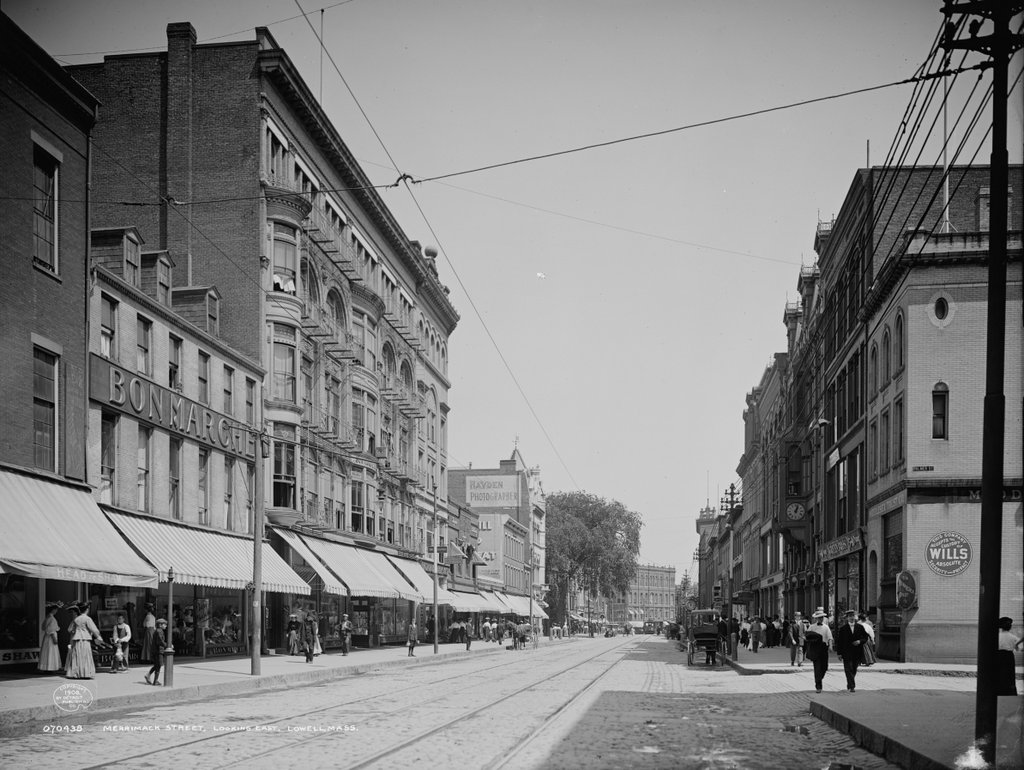 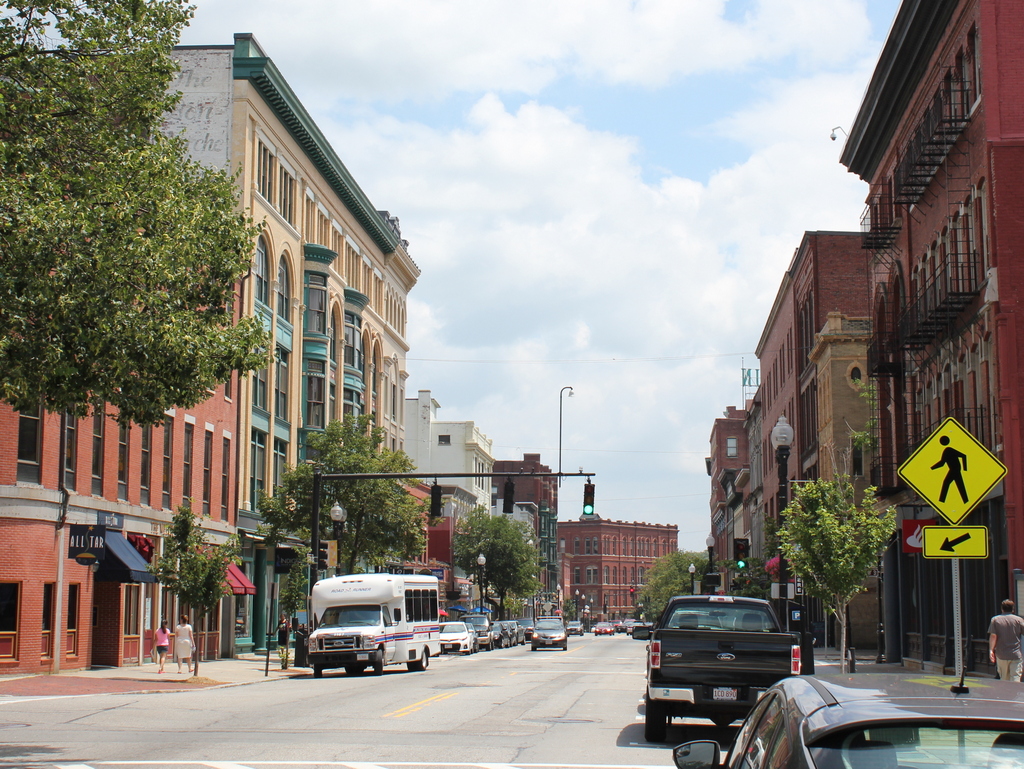 The city of Lowell was once one of the major manufacturing centers in the country, and for much of the 19th century it was the state’s second largest city.  This section of Merrimack Street became the commercial center of the prosperous city, but by the mid 20th century most of the factories had closed, the population declined, and there wasn’t much economic development in the downtown area.  From a historical preservation perspective, this actually worked out, because today’s Merrimack Street includes a number of historic late 19th century commercial buildings that may have otherwise been demolished and redeveloped.  The city has since undergone a revitalization, thanks in part to the creation of the Lowell National Historical Park and the growth of UMass Lowell.

Among the many historic buildings that survive from the original photo, probably the most prominent is the Bon Marche Building, the large yellow brick building on the left.  It actually consists of two 19th century buildings, with the section on the far right having been built around 1874.  The much larger section was built in 1892, and was the home of the Bon Marche department store.  In 1927, the department store expanded, with a matching addition on the left-hand side that gave the building a little more symmetry.  The addition replaced the much smaller brick building that had the large “Bon Marche” sign on the front in the 1908 photo.  The Bon Marche closed in 1976, and the space was used by the Jordan Marsh department store until it too closed in the 1990s.  Today, the building is home to the UMass Lowell Bookstore and several other businesses, but there is at least one reminder left from its past – the faded paint of the white sign on the top of the 1927 addition, which reads “The Bon Marche.”

Other historic buildings include the 1846 Welles Block, visible on the far left.  (The 2015 photo was taken from a little further back, so more of the building can be seen in it than in the 1908 photo.)  In the distance at the center of the photo is the Runels Building, also known as the Fairburn Building.  It was built around 1892 for retail and office space, and in 2004 the upper floors were renovated and converted into condominium units.  On the right-hand side of the street, probably the most obvious surviving building is the 1893 Middlesex Safe Deposit and Trust Company Building, another one of many commercial buildings on Merrimack Street that was built in the 1890s.  The building, with its distinctive oval window on the side, is at the corner of Merrimack and Palmer Streets, and over the years has been used as a bank and as a fur company.  Today, the exterior of the building is well-preserved, and the retail space on the ground floor is a bakery.