The northeast corner of Philadelphia City Hall, seen from the corner of Market and Filbert Streets, around 1905. Image courtesy of the Library of Congress, Detroit Publishing Company Collection. 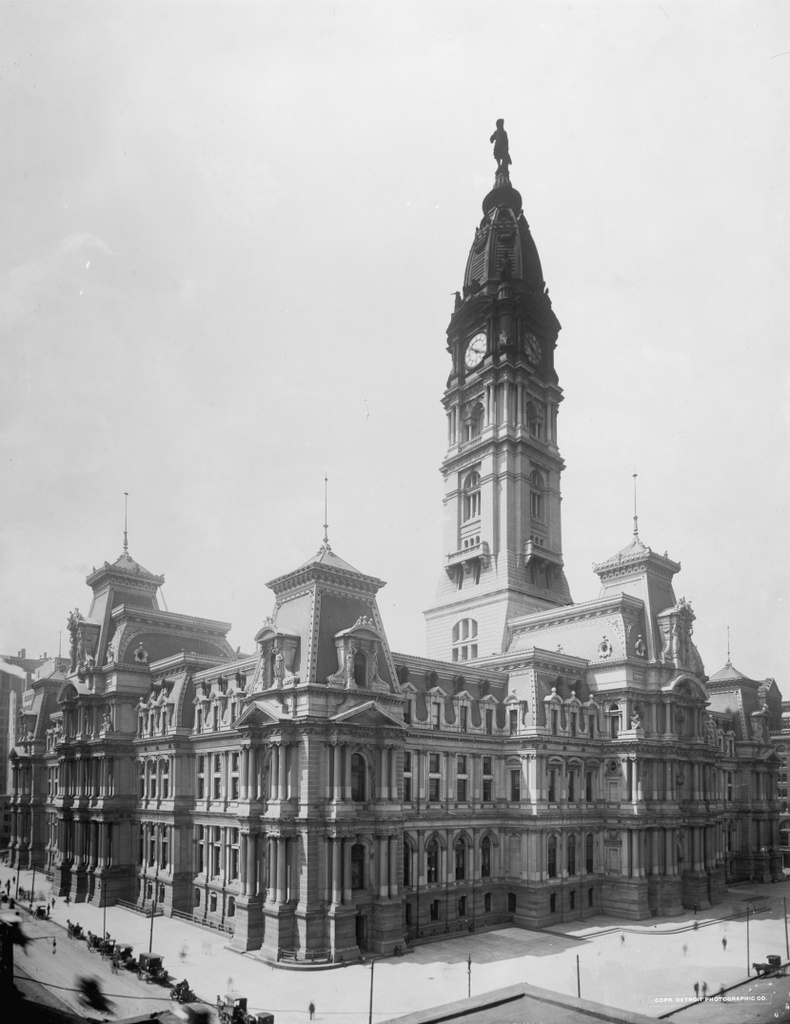 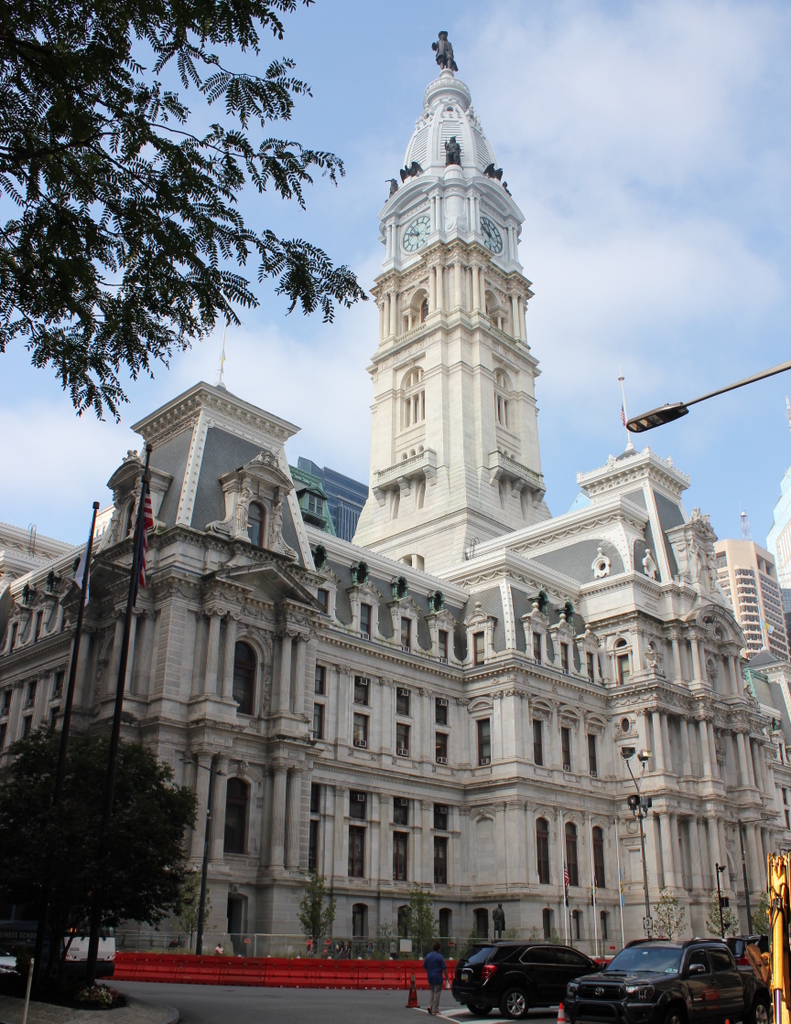 Throughout most of the 19th century, Philadelphia’s municipal government was located in the old city hall building, adjacent to Independence Hall at the corner of Chestnut and Fifth Streets. Built in the 1790s, when Philadelphia had a population of barely 30,000 people, this building had become too small for the rapidly-growing city by the mid-19th century. The result was a new city hall, shown here in these two photos. It would be everything that the small, plain Federal-style building was not: it would be massive and architecturally opulent. Upon completion, it also held the title of the tallest habitable building in the world, marking the only time that a building in Philadelphia would hold this distinction.

The site of the current city hall had previously been a park, known as Centre Square. This park had been a part of William Penn’s original design for the city’s street grid, and it proved to be an ideal location for city hall, at the intersection of the north-south oriented Broad Street and the east-west Market Street. The building was designed by John McArthur Jr., a Scottish-born architect who spent most of his life in Philadelphia. His design featured a Second Empire-style exterior, which was particularly popular for government buildings in the United States during the post-Civil War era. Work began in 1871, but it would ultimately take 30 years to finish, at a cost of $25 million, thanks to construction cost overruns and governmental corruption.

City Hall is laid out in the shape of a square, with seven floors surrounding a central courtyard. In the middle of each side of the building is a large, ornate pavilion that rises above and projects outward from the rest of the building, as shown on the rights side of this scene. On the ground floor of each pavilion is an open archway leading into the courtyard. Along with these pavilions, the building also features matching turrets at each of the four corners. However, by far the most distinguishing feature of City Hall is the tower here at the northern side of the building. It rises 548 above the street, and it is topped by a 37-foot statue of William Penn that was designed by sculptor Alexander Milne Calder.

Although the interior was not completed until 1901, portions of the building were in use by the late 1870s. The tower topped out in 1894, surpassing Germany’s Ulm Minster as the tallest habitable building in the world. As such, it became the first non-religious building in recorded history to hold this distinction, and it would also become the last non-commercial building to do so. Its height was eventually surpassed by the Singer Building in 1908, and since then all of the record holders have been modern skyscrapers. Because of this, Philadelphia City Hall has a unique position on the timeline of the world’s tallest buildings, representing a transition from the cathedrals of the 19th century to the skyscrapers of the 20th century.

Despite its record-setting height, the size of City Hall is somewhat deceptive when viewed in photographs. Part of this was intentional on McArthur’s part, as the arrangement of windows gives the appearance, at first glance, that there are only three floors above the ground floor. This illusion affects the apparent scale of the tower as well, and it is hard to tell from a photograph that the statue is actually 37 feet tall, rather than simply being life-sized. As a result, photographs do not fully capture just how massive this building is. However, it is quite the imposing building when seen in-person, and this would have been even more so for the people in the first photo, which was taken when City Hall was still the world’s tallest building.

Unfortunately for architect John McArthur, the many construction delays meant that he did not live to see the completion of his magnum opus; he died in 1890, at the age of 66. These delays also meant that, by the time it was completed, the design of City Hall was hopelessly out of date. By the late 19th century, tastes had shifted away from the highly ornate features of Second Empire architecture, and City Hall was seen as a relic of an earlier era. This criticism started even before the construction was finished, with the Philadelphia Inquirer declaring it to be an “architectural monstrosity” that “always will be until that bizarre French roof is ripped off and a couple of substantial stories added.”

City Hall would continue to face criticism after its completion, both for its design and also for its location in the middle of a major intersection. As early as 1916 there were calls for its demolition. The Inquirer reiterated its criticism of the design, which the newspaper believed “belongs to a thoroughly discredited era of architectural merit.” Furthermore, the building “blocks our two chief streets and hampers developments which are essential to the welfare of the people and to Philadelphia’s progress.” Consequently, the Inquirer argued, “everyone will agree that where it stands now is an obstruction and a nuisance and the only open question relates to the expediency from a practical and business-like viewpoint of its obliteration.”

This proposal ultimately gained little headway, but the building survived several more serious proposals to demolish it, including one in the 1950s. However, this plan failed in part because of the enormous expense of demolishing such a large masonry structure; the demolition costs would have been roughly equal to what it had cost to build City hall a half century earlier.

Despite the long history of criticism of City Hall, it retained the title of tallest building in Philadelphia throughout most of the 20th century, thanks to an informal gentleman’s agreement that no building should rise higher than the statue of William Penn. However, its height was ultimately surpassed by One Liberty Place in 1987, and other skyscrapers soon followed. Because of this, City Hall is now only the 12th-highest in the city.

Today, more than 120 years after its completion, City Hall remains in use by Philadelphia’s municipal government. It is the largest city hall in the country in terms of interior floor space, and it also stands as the world’s tallest freestanding masonry building in the world. Several other masonry structures are taller, including the Washington Monument, but these do not qualify as buildings and so are listed in a separate category. Over the years, the views on City Hall’s architectural design have changed, and the building is now highly-regarded as a masterpiece of Second Empire architecture. As a result, in 1976 it was designated as a National Historic Landmark, which is the highest level of federal recognition for a historic building.