The townhouses at 80-82 Maple Street in Springfield, around 1938-1939. Image courtesy of the Springfield Preservation Trust. 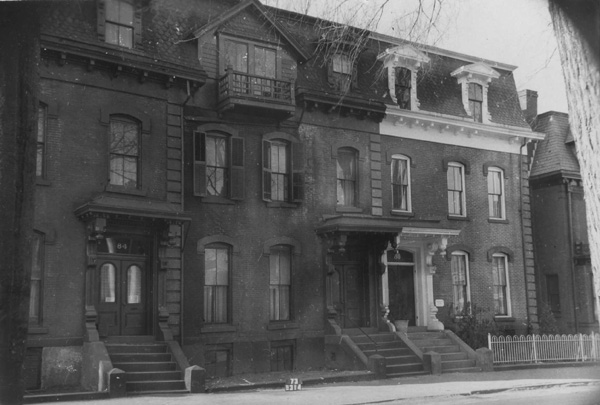 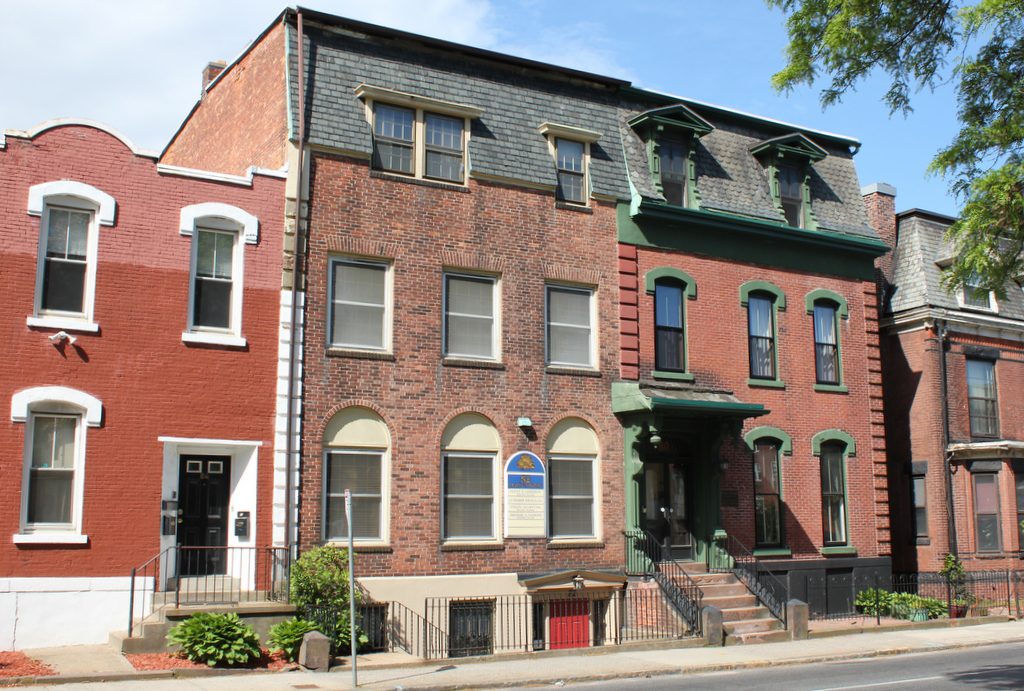 These three Second Empire-style townhouses were built in 1870, at the corner of Maple and Union Streets. They were constructed by local builder Abel Howe, and they originally had a fairly uniform appearance, although two of the three have since been significantly altered. As mentioned in the previous post, the house on the left was the home of Edmund D. Chapin, the longtime cashier and eventual president of the John Hancock National Bank. During the 19th century, the other two houses had similar upper middle class residents, including Dr. David F. Atwater, who lived in the house in the middle, and insurance clerk and real estate agent Frank H. Fuller, who lived in the house on the right.

David F. Atwater was born in 1817 in North Branford, Connecticut, and was the younger brother of George M. Atwater, who established Springfield’s streetcar system. David attended Yale, earning his undergraduate degree in 1839 and his medical degree in 1842, and he practiced medicine in Brooklyn and in Bridgeport before moving to Springfield. He and his wife Sarah were living here at 82 Maple Street by about 1883, and they lived here for the rest of their lives. Sarah died in 1910, and David in 1916, at the age of 98. Prior to his death, David was the oldest living Yale graduate, and he was also the last living Yale graduate from the 1830s. His name still lives on today in Camp Atwater in North Brookfield, a summer camp that was named in his honor after his daughter Mary donated $25,000 in 1926.

In the meantime, the house on the right at 80 Maple Street was the home of Frank H. Fuller, who was living here with his wife Elizabeth and their daughter Grace by the mid-1870s. He worked for the Massachusetts Mutual Life Insurance Company, first as a clerk and later as a real estate agent, and he was responsible for the development of the Fuller Block, which still stands at the corner of Main and Bridge Streets.

By the early 20th century, many of the upscale townhouses in Springfield had been converted into lodging houses, including the homes on the right and the left here. During the 1920 census, for example, 80 Maple was rented by a family of four, who in turn rented rooms to nine lodgers, mostly single factory workers. A decade later, during the 1930 census, the house had a similar number of tenants, although most of them were married couples.

Of the three houses, the one in the middle at 82 Maple remained a single-family home for the longest. Daniel Atwater’s daughter Mary continued living here until her death in 1927, and by the end of the decade the house was being rented by John E. Hummel, who lived here with his wife Agnes, their two children, and Agnes’s sister Delia. They also rented rooms to several lodgers, and the 1930 census shows John’s occupation as being a lodging house keeper. However, John was also a retired Major League Baseball player who played second base and outfield for the Brooklyn Superbas and Robins from 1905 to 1915, and the Yankees in 1918. He also played minor league baseball for several years, including here in Springfield in 1922, but he had retired from baseball by the time he and his family moved into this house.

By the time the first photo was taken in the late 1930s, John Hummel and his family were still living in the house in the middle. The 1940 census shows them paying $50 per month in rent, with John working as a foreman for a match factory, earning $1,440 per year. Their daughter Joan, 22 years old at the time, was also employed, working as a clerk in a department store. A few years later, though, the family left this house and moved to Oswego Street and then to Sumner Avenue, where they lived until John’s death in 1959.

In the 80 years since the first photo was taken, both of the houses on the left have been dramatically altered. The third floor of 84 Maple was removed in the mid-1940s, and at some point the entire facade of 82 Maple was replaced, including a new front door in the basement level. Only 80 Maple on the right has remained relatively unchanged, and today it continues to be used as a private residence. Despite the changes, though, all three houses are still historically significant, and they are now part of the Maple-Union Corners Historic District, which was added to the National Register of Historic Places in 1976.