The townhouses at 76-78 Maple Street, at the corner of Park Street in Springfield, around 1938-1939. Image courtesy of the Springfield Preservation Trust. 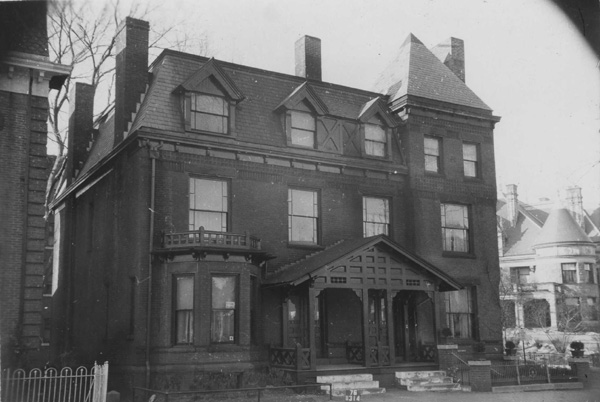 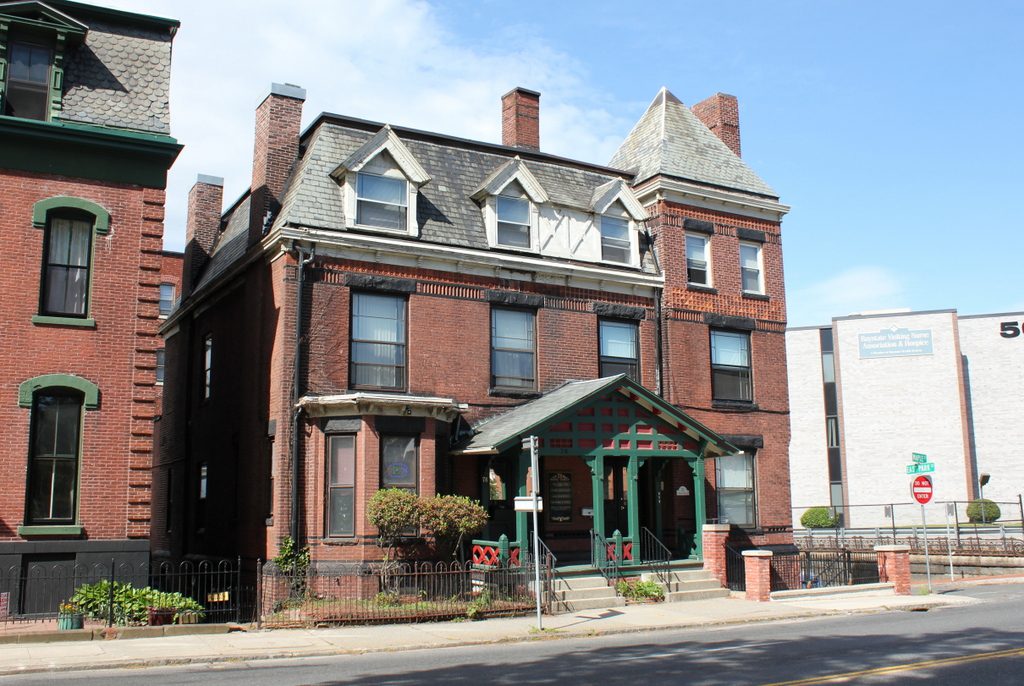 This double townhouse was built in 1879 at the corner of Maple and Park Streets, directly adjacent to a block of three townhouses to the left, which were built almost a decade earlier. Architecturally, the two groups of townhouses have similar Second Empire-style architecture, although the 1879 homes show the beginnings of the more elaborate Stick and Queen Anne styles, which would become dominant in the 1880s. These two homes were originally owned by Seth Hunt, who lived in the more desirable house on the right at the corner, and his son David, who lived in the house on the left.

Born in Northampton in 1814, Seth Hunt was a longtime employee of the Connecticut River Railroad, and served as the company’s treasurer from 1858 until his death in 1893. Aside from his work on an actual railroad, though, Hunt was also an abolitionist who was active in the Underground Railroad prior to the Civil War. He lived in Northampton at the time, and used his house to help shelter runaway slaves. During this time, he had friendships with some of the country’s leading abolitionists, including Henry Ward Beecher, Frederick Douglass, Ralph Waldo Emerson, William Lloyd Garrison, and Sojourner Truth.

Seth and his wife Juliet moved from Northampton to Springfield after this house was completed, and they lived here until their deaths in the summer of 1893, only six weeks apart from each other. In the meantime, in the early 1880s their son David and his wife Grace lived in the house next door on the right side, and he worked with his father as assistant treasurer of the Connecticut Valley Railroad. However, later in the 1880s the city directories show David living with his parents on the right side.

By the late 1880s, the house on the left was the home of Maria Browne, a writer and retired teacher who was about 70 at the time. Born in Northampton, she grew up in Templeton, Massachusetts, and graduated from Mount Holyoke in 1840. She subsequently moved to New York City, where she worked as a teacher while also writing magazine and newspaper articles as well as short books. Her writings included moral stories for children, and in 1866 the book The Female Prose Writers of America described her, with regards to her writing, as being “playful, pathetic, serious, earnest, full of life and intensity, never prosaic, never tedious, never common-place, deeply imbued with the religious, largely read in that school of sensibility which enables her to sympathize with all forms of human sorrow and suffering; her writings, consequently, find their way directly to the heart and bosom of the reader.”

Browne never married, and she lived here in this house from around the late 1880s until her death in 1908 at the age of 89. Two years later, the house was still owned by her heirs, who rented it to real estate broker Henry F. Waters, his wife Frances, and their young daughter, who was also named Frances. During that same time, the house on the right was owned by physician Ralph B. Ober, who lived here with his newlywed wife Eleanor. Dr. Ober was a 1901 graduate of Harvard Medical School, and he began practicing medicine here in Springfield in 1904. By the early 1910s, he was a assistant medical director for Massachusetts Mutual, an assitant surgeon at Springfield Hospital, and president of the Springfield Association for the Prevention of Tuberculosis.

The Obers had two children, Frederick and Mary, and they were still living here when the first photo was taken in the late 1930s. In the meantime, though, most of the nearby townhouses, including the house on left, had become lodging houses in the first half of the 20th century. During the 1930 census, the lodging house was run by Harry A. Engel, who rented it for $85 a month and, in turn, rented rooms to six different families with a total of 19 people. A decade later, shortly after the first photo was taken, it was still a lodging house, although by this point it was being run by Orelina Menard, who had only seven lodgers here.

Ralph Ober died in 1945, but Eleanor continued to live here until her death in 1972, at the age of 86. Just four years later, the house became part of the Maple-Union Corners Historic District on the National Register of Historic Places, and very little has changed in this scene since then. The only major difference between the two photos is the house in the distance on the far right. Completed in 1899 as the home of firearms manufacturer Daniel B. Wesson, it was later used as the clubhouse of the Colony Club, until it burned down in 1966. A medical office building, visible on the right side, now stands on the site.