The Isaac Bell House at the corner of Perry Street and Bellevue Avenue in Newport, around 1883-1895. Image courtesy of the Cornell University Library, Andrew Dickson White Architectural Photographs Collection. 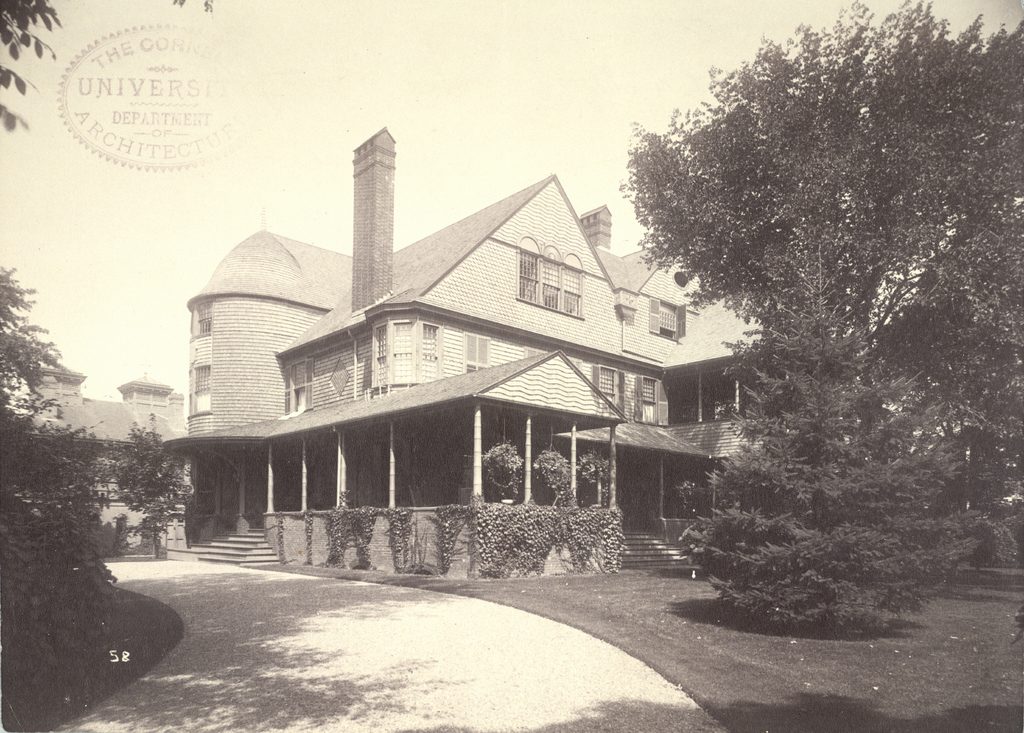 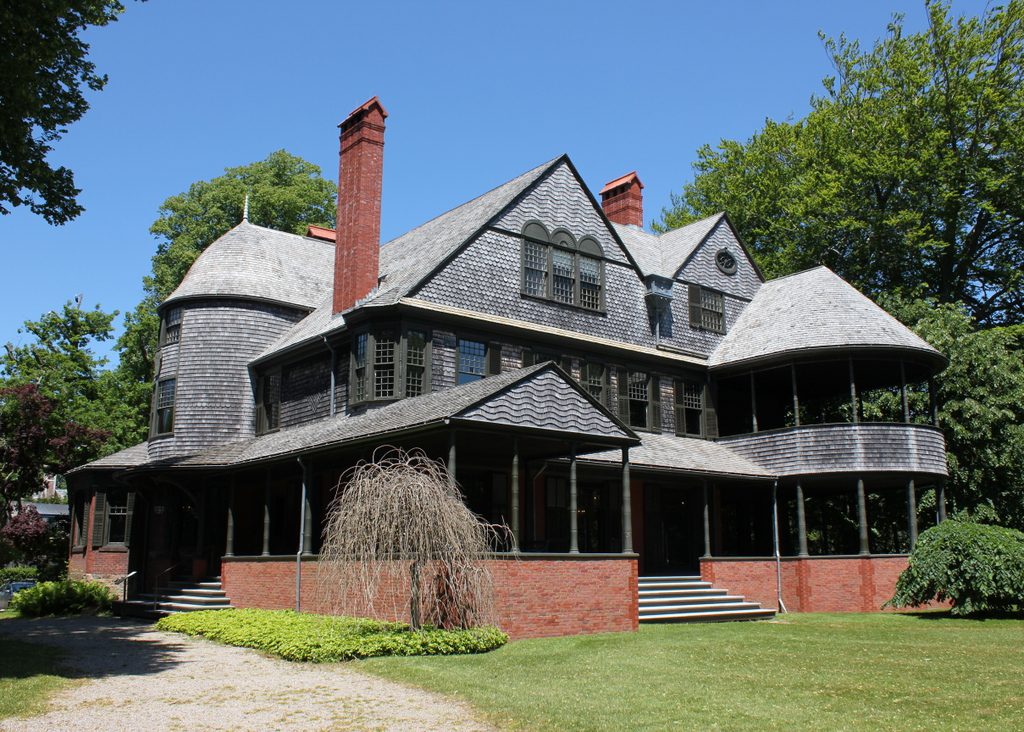 Although not as large or ostentatious as many of the other 19th century mansions in Newport, this house is among the most significant, and stands as an architectural landmark. It is widely considered to be a masterpiece of Shingle Style architecture, and it was one of the early examples of this style, which would become popular in the late 19th century, particularly in New England coastal resort communities like Newport. It was also one of the first commissions of the New York-based firm of McKim, Mead & White, which would go on to become one of the nation’s leading architectural firms of its era.

Unlike most of the other architectural movements in 19th century America, the Shingle style was not an imitation of earlier European designs. Instead, it was a distinctly American style, and typically blended elements of colonial architecture while also using traditional building materials, such as the ubiquitous cedar shingles. Like the contemporaneous Queen Anne style, Shingle style homes tended to have complex, asymmetrical designs, often with turrets and large porches. However, Shingle style deliberately avoided the excessive ornamentation of Queen Anne architecture, and instead featured exteriors that were almost completely covered in shingles. As a result, these homes tended to blend in with their surroundings, instead of other types of houses that were specifically designed to stand out.

This house was completed in 1883 for Isaac Bell, Jr.,   a New York native who had recently retired after a brief but successful career as a cotton broker. He was just 31 at the time of his retirement, and with his inheritance from his father plus his own accumulated wealth he was able to establish himself here in Newport society. In 1878, a year after retiring, he married Jeannette Bennett, the sister of New York Herald owner James Gordon Bennett, Jr. Here in Newport, Bennett was well-known for his eccentric, often flamboyant behavior, but he was also the founder of the Newport Casino, one of the city’s leading social clubs. The Casino building, located a few blocks away from here on Bellevue Avenue, was also designed by McKim, Mead & White, and this family connection may have been the reason why Bell commissioned them to design his house a few years later.

Although retired from active business, Isaac Bell was involved in politics as a member of the Democratic Party. He was the president of Newport’s Democratic Club, and campaigned for Grover Cleveland in the 1884 presidential election. The following year, Cleveland rewarded Bell by appointing him as the US ambassador to the Netherlands, a post that he would hold for nearly three years. He was a delegate to the Democratic National Convention in 1888, but later that year he fell ill with typhoid fever while here in Newport. He returned to New York and underwent surgery, but it was unsuccessful and he died a few weeks later in January 1889, at the age of 42.

In 1891, Jeannette sold the property to Samuel F. Barger, a prominent New York City lawyer who was a longtime director of the New York Central Railroad. One of the most important railroads in the country, the New York Central had been acquired by Cornelius Vanderbilt, and in that same year Barger began serving on the board of directors. Two years later, the railroad was merged with the Hudson River Railroad, which was another of Vanderbilt’s holdings, and Barger became a director of the consolidated corporation. Barger would continue to serve on the board alongside two more generations of Vanderbilts, outliving Cornelius, his son William, and William’s son Cornelius Vanderbilt II, who built The Breakers here in Newport. He served on the board into the 20th century, and was the last surviving member of the consolidated railroad’s original 1869 board.

Upon purchasing this house, Barger named it Edna Villa, in honor of his wife, Edna LaFavor. The couple had married in 1869, and they had three children: Maud, Edna, and Milton. Maud was an accomplished tennis player, winning the singles title in the 1908 U.S. National Championships and finishing as the runner-up in 1906 and 1909. She did not start playing tennis until she was about 30, but she played competitively well into her 40s. In 1912, at the age of 42, she was the runner-up in the women’s doubles championship, and three years later she was still ranked among the top 10 in the world. In 1958, a few years after her death, she was inducted in the Tennis Hall of Fame in 1958, which is located at the Newport Casino, just a quarter mile away from here.

During Samuel Barger’s ownership, this house was altered several times, including an addition to the southwest corner in the late 1890s, as well as the removal of the carriage house on the left side of the photo around the same time. After Samuel’s death in 1914 the property remained in his family for many years, and another addition was built on the west side in the 1920s. His daughter Edna would eventually inherit the property, and she owned it until finally selling it in 1952. By this point, Newport was no longer the exclusive summer colony that it had once been, and massive Gilded Age mansions had long since fallen out of fashion. A relic of a bygone era, the house was converted into a nursing home, and was later divided into apartments.

In 1996, the house was sold to the Preservation Society of Newport County, which operates many historic house museums in Newport, including The Breakers and Marble House. The Preservation Society restored the house, and subsequently opened it to the public as a museum. Unlike most of the organization’s other properties, this house is only minimally furnished, in an effort to highlight the architectural details of the interior. Despite the many changes over the years, the interior has remained well-preserved, and very little has changed in this view of the exterior since the first photo was taken some 125 years ago. Because of this level of preservation, along with its architectural significance, the house was designated as a National Historic Landmark in 1997.