The Newport Tower at Touro Park, around 1899. Image courtesy of the Library of Congress, Detroit Publishing Company Collection. 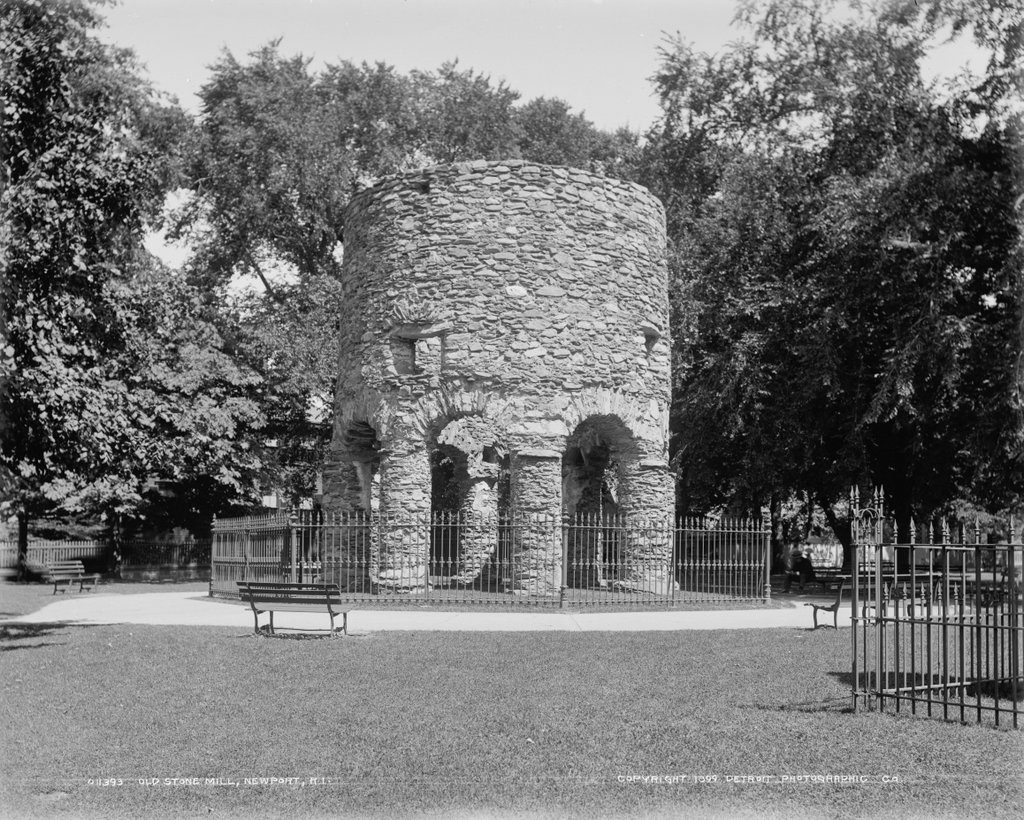 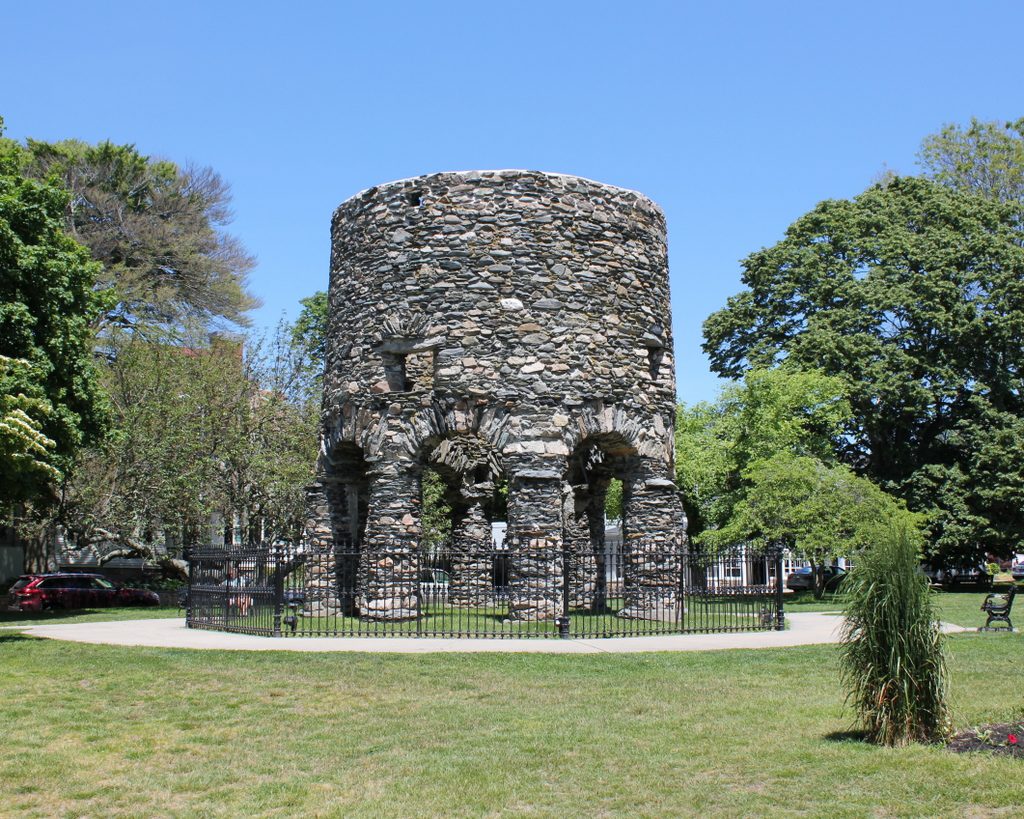 This stone tower is generally considered to be among the oldest existing structures in Newport, as well as one of the oldest in the entire state. However, the actual age of the tower has been the subject of much speculation over the years, leading to a number of alternate theories regarding its origins. Conventional historical evidence suggests that it was built in the 1670s as a windmill, but others argue that it is actually much older, with construction variously being ascribed to Vikings, the Knights Templar, medieval Portuguese explorers, and even the Chinese.

The most credible explanation is that the tower was once a windmill that had been built by Benedict Arnold (1615-1678), the colonial president and governor of Rhode Island whose great-grandson of the same name was the notorious traitor of the American Revolution. The tower appears to have been built on his property at some point in the early 1670s, and was mentioned in his 1677 will as “my stone built Wind Mill.” The overall design, with a stone exterior supported by arches on the ground floor, is also consistent with contemporary English windmills, such as the Chesterton Windmill in Warwickshire, which gives further credence to the fact that this tower was a 17th century windmill.

Despite this credible evidence, over the years many have suggested alternate explanations, with probably the most widespread theory claiming that it was built by Vikings during their pre-Columbian explorations of North America. Long considered to be myths, the Norse stories of trans-oceanic explorations were not given much serious attention until 1837, when Danish historian Carl Christian Rafn proposed that these ancient sagas were based on actual voyages to North America. He included the Newport Tower, as well as the nearby Dighton Rock in Massachusetts, as evidence of Norse settlement of the area, and the theory was further popularized by Henry Wadsworth Longfellow in his 1841 poem “The Skeleton in Armor,” where he writes:

There for my lady’s bower
Built I the lofty tower,
Which, to this very hour,
Stands looking seaward.

As it turned out, Rafn was correct about Norse settlement in North America, with archeological evidence verifying that Vikings briefly established a colony in Newfoundland. However, the southward extent of Viking exploration is unclear, and there have been no other definitive archeological finds beyond Newfoundland. There is no evidence that Vikings carved the mysterious Dighton Rock, and the connection to the Newport Tower seems equally spurious. Additionally, the tower bears little resemblance to anything in Norse architecture, while strongly resembling other 17th century English windmills.

Other alternate theories have included speculation that it was built by medieval Scottish Knights Templar, by 15th century Chinese explorers, or by early 16th century Portuguese explorer Miguel Corte-Real. However, all of these theories, including the Viking one, face a number of challenges. Newport was settled by Europeans in 1639, and the island had been thoroughly explored more than a century earlier by Giovanni da Verrazzano, yet there are no surviving accounts of this tower, which would have undoubtedly stood out to early settlers as being highly unusual if it had been there when they arrived. In colonial-era documents,s such as Arnold’s will, it is referred to only as a stone mill, and it would not be for another two centuries after Newport’s establishment that people such as Rafn began to question its origins.

Along with the historical evidence, scientific evidence has also cast serious doubt on the alternate theories and further bolstered the windmill theory. An 1848 study compared the mortar in the tower to that of other 17th century buildings in Newport, and found the samples to have essentially the same composition. Nearly 150 years later, radiocarbon dating futher verified this, finding that the mortar dates back to sometime between 1635 and 1698. Along with this, archaeological digs in the vicinity of the tower have found plenty of 17th century artifacts, but absolutely nothing from earlier centuries.

The tower, along with the surrounding property, was donated to the city in 1854 by Judah Touro, a wealthy New Orleans businessman and philanthropist whose father, Isaac Touro, had been the rabbi of Newport’s Touro Synagogue. This land, located between Mill Street, Pelham Street, and Bellevue Avenue, became Touro Park, with the tower serving as its centerpiece. By the time the first photo was taken at the turn of the 20th century, the tower’s alleged Viking connections were already well-established, and at least one contemporary guidebook, the 1916 A Guide to Newport, mentioned both the Viking and windmill theories, but more strongly argued in favor of the former. Certainly, the romantic appeal of the tower as a place where Viking warriors defended their settlement is far greater than that of a windmill where Benedict Arnold’s ancestors ground cornmeal, but the historical, archaeological, and scientific evidence seems to suggest otherwise.

Today, very little has changed in this scene, nearly 130 years after the first photo was taken. The park’s landscaping is essentially the same, and the tower is still surrounded by a short iron fence, with no changes to the tower itself. Although most likely not a Viking ruin, nor an artifact from some other previously-unknown visitors, the tower is undeniably an important historic landmark as a rare surviving 17th century windmill and one of the oldest structures in the state. Along with the rest of the neighborhood, it now forms part of the Newport Historic District, which was designated as a National Historic Landmark district in 1968.