The First Parish Church, at the corner of Main Street and Parker Avenue in Northfield, around 1891. Image from Picturesque Franklin (1891). 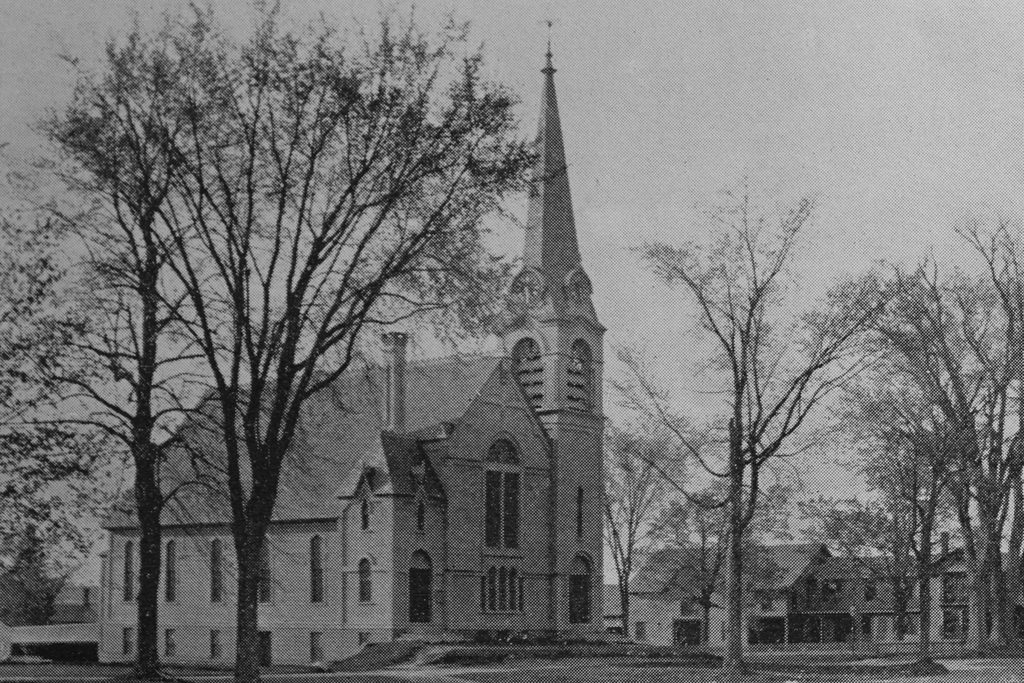 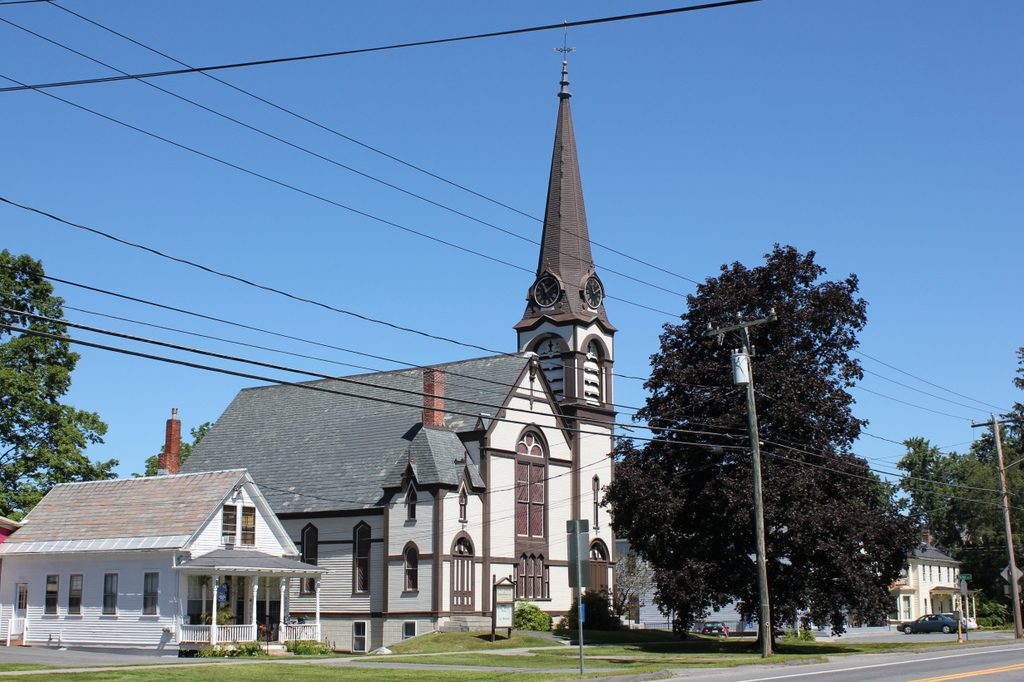 The origins of the First Parish Church date back to 1673, when Northfield was first settled by colonists. However, the town’s frontier location at the far northern end of the Connecticut River valley in Massachusetts made it vulnerable to attack from Native Americans and their French allies, and it would be several more decades before Northfield was permanently settled. The church also had a somewhat nomadic existence during these years, with worship services usually being held in private homes until 1718, when the first meetinghouse was built in the middle of Main Street, right near where the present-day church is located.

The first meetinghouse stood here until 1767, when its replacement was built on the west side of the street, near site of the current church. This new church stood here for more than 60 years, and during this time the New England Congregational church experienced a major schism, between the theologically liberal Unitarians and the orthodox Trinitarians. Thomas Mason, who served as pastor from 1799 to 1830, was among the Unitarians, and during his pastorate the First Parish became a Unitarian church, with most of the congregation supporting him.

A third meetinghouse was built on the site in 1833, and was used by the church until it burned in 1870. During this time, the First Parish had perhaps its most famous congregant, the young Dwight L. Moody, who would later go on to become a prominent evangelist in the second half of the 19th century. Moody was born in Northfield in 1837, and was just four years old when his father died, leaving his mother Betsey Moody to raise nine children on her own. The pastor of the church at the time, Oliver C. Everett, provided support for the family, though, and Betsey and her children were subsequently baptized into the church. However, the family left the church after Everett’s departure in 1848, and many years later Dwight L. Moody would decline an invitation to speak here at the First Parish Church, citing the incompatibility between his orthodox views and their Unitarian beliefs.

The present church was built in 1871, standing on approximately the same site as its two predecessors. Its ornate Gothic-style design was the work of Elbridge Boyden, a prominent architect from Worcester, and it stands out in a town center that otherwise consists primarily of early 19th century Federal and Greek Revival-style homes. It was built at a cost of nearly $15,000 (a little over $300,000 today), and the interior of the church included an organ that had previously been installed in the old Unitarian church in Springfield. Originally built in 1842 by E & G. G. Hook of Boston, it was used by the Springfield church until its new building was completed in 1869, and was later given to the Northfield church.

Today, more than 125 years after the first photo was taken, the exterior of the church has not seen any significant changes. It remains a well-preserved example of a wood-frame Gothic Revival church, and it is still in active use by the First Parish Church. The only significant difference between the two photos is the small building on the left side of the scene. This was built in 1901, about 10 years after the first photo was taken, and was originally a motorcycle repair shop. It was later used a printing shop, but it has since been converted into a house. Today, both this house and the church, along with the rest of the historic buildings along Main Street, are now part of the Northfield Main Street Historic District, which was added to the National Register of Historic Places in 1982.