The house at 128 Essex Street in Salem, around 1906. Image courtesy of the Library of Congress, Detroit Publishing Company Collection. 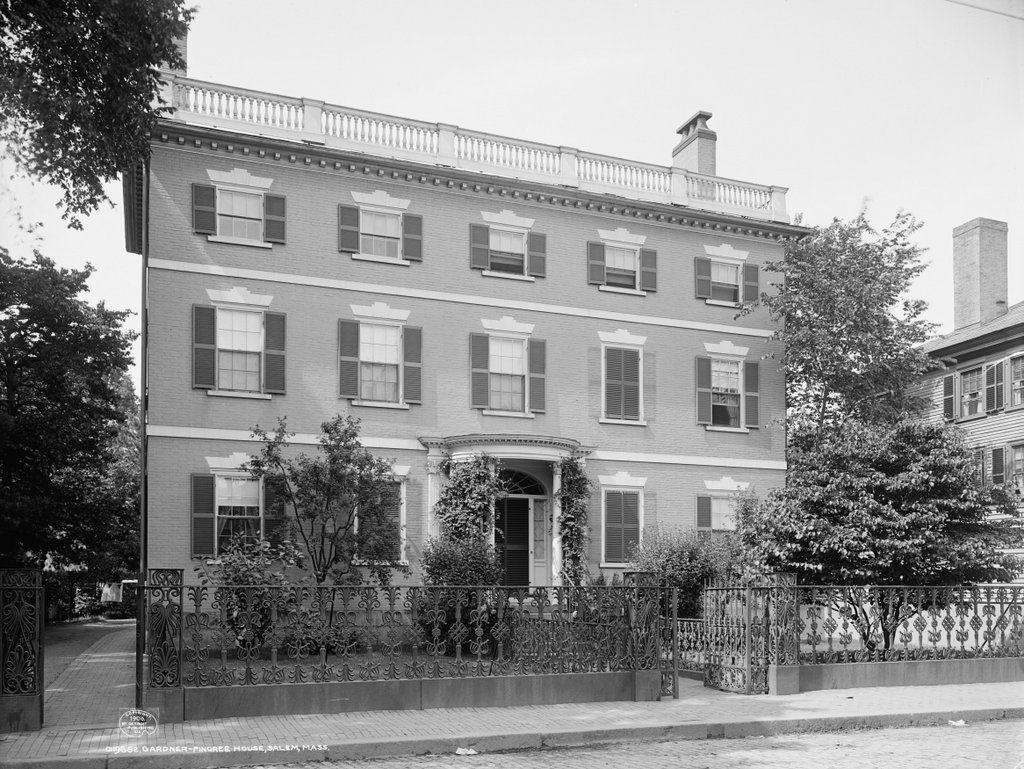 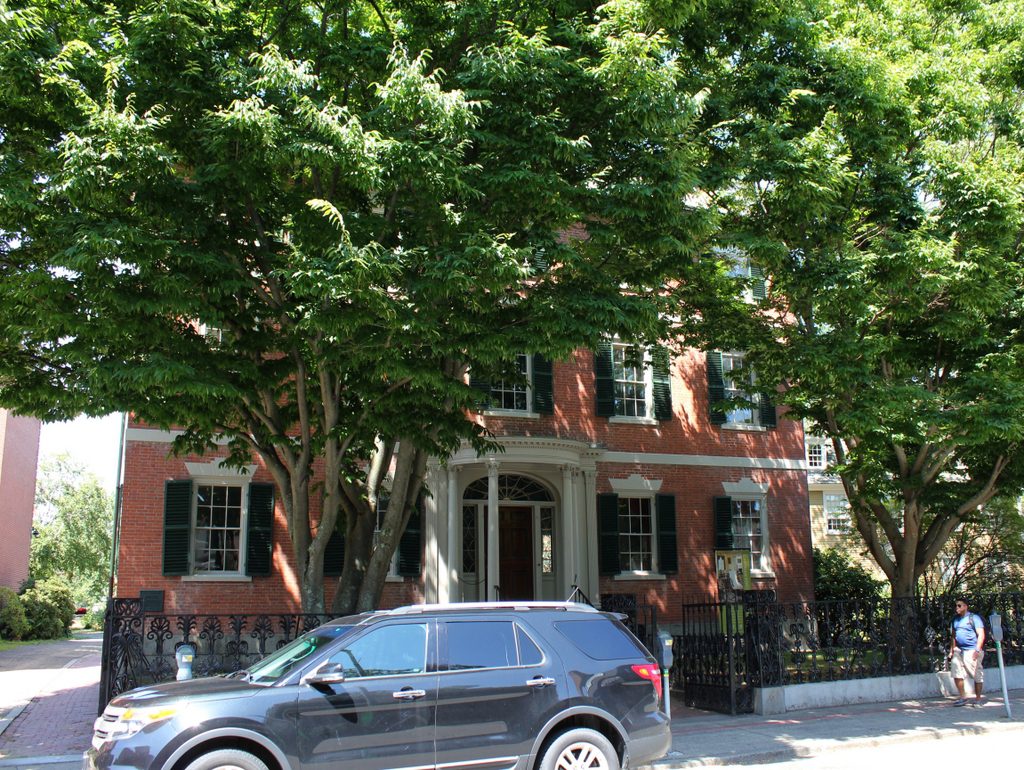 The peak of Salem’s prosperity as a seaport came at the turn of the 19th century, a period that coincided with the height of Federal-style architecture. As a result, the town saw the construction of a number of elegant Federal homes and public buildings, many of which still stand today. Among the finest of these is Gardner-Pingree House, which was built in 1804-1805 at 128 Essex Street. It is believed to have been the work of prolific Salem architect Samuel McIntire, and today it is widely regarded as an architectural masterpiece of this era. Like many of McIntire’s other homes, it has three stories, with a rectangular front facade, a hip roof with balustrade, and a small portico at the front door. The house is built of brick, but it also includes marble lintels above the windows and marble trim above the first and second floors.

The original owner of this house was John Gardner (1771-1847), a merchant who owned a number of ships and operated a wholesale business on Union Wharf. According to a 1907 Gardner family genealogy, his business included importing commodities such as “sugar, coffee, cocoa, dyewood, mahogany, broadcloth, Peruvian bark, indigo, spices, etc., etc.” He purchased this land from his father, and moved into this house upon its completion in 1805, along with his wife Sarah and their young children. However, he would go on to suffer significant financial losses in the years before and during the War of 1812, when the British preyed on American shipping. As a result, in 1811 he sold the house to Sarah’s brother, Nathaniel West, for $13,333.33, although the Gardners continued to live here until 1814, when West sold it to wealthy ship captain and merchant Joseph White.

White was in his late 60s and retired when he purchased the house, and he lived here for the next 16 years. His wife Elizabeth died in 1822, and the couple had no children, although he did live here with his niece, Mary Beckford, and her daughter, who was also named Mary. This younger Mary was 17 when she became engaged to Joseph Knapp, Jr., a young mariner who had been captain of one of White’s ships. White was opposed to the match, viewing Knapp as a gold digger, and had threatened to disinherit her if she married him. She married Knapp anyway, in the fall of 1827, and the newlyweds then moved to the nearby town of Wenham.

Less than three years later, on April 7, 1830, Joseph White was brutally murdered here in this house. He was struck in the head with a club while he slept in his bed, and was then stabbed 13 times. By the time his body was discovered three or four hours later, the killer was long gone, but the murder quickly became a major news story. A committee was formed to investigate it, and in a little over a week the evidence pointed to two brothers, Richard and George Crowninshield. It was later discovered that the pair had been hired by Joseph Knapp, who paid them $1,000 to carry out the murder.

According to Knapp’s subsequent confession, he had entered White’s room a few days before the murder, and had stolen what he believed was White’s will. He also left a window unlocked, enabling Richard Crowninshield to access the house while White slept. His reasoning behind the crime was that, with the will missing, the courts would divide White’s large estate equally among all heirs, including Knapp’s disinherited wife. However, as it turned out, Knapp had stolen the wrong will. The actual will had been stored in the office of White’s lawyer, and after his murder the bulk of his estate went to his nephew, the prominent merchant Stephen White.

The resulting trial became a legal spectacle on a scale not seen in Salem since the witch trials of 1692. Determined to avenge the death of his uncle, Stephen White hired his close friend, Senator Daniel Webster, to lead the prosecution, with a symbolic fee of $1,000 – the same amount that Knapp had paid for the murder. Richard Crowninshield committed suicide while in prison awaiting trial, but the other three defendants included George Crowninshield, Joseph Knapp, and Joseph’s brother Frank.

Both of the Knapp brothers were subsequently found guilty, and were hanged in the fall and winter of 1830-1831. Mary also attempted suicide twice during the trials, although she survived and was never charged in the murder. Of the conspirators, only George Crowninshield managed to avoid the hangman’s noose. He had evidently been visiting a local brothel on the night of the murder, and the madam provided an alibi during his trial.

Both the murder and the trials were extensively reported by journalists, and may have even had an influence on some of the most famous works of 19th century American literature. Daniel Webster’s speech to the jury provided a detailed account of how the murder would have taken place, with descriptions such as:

The deed was executed with a degree of self-possession and steadiness equal to the wickedness with which it was planned. The circumstances now clearly in evidence spread out the whole scene before us. Deep sleep had fallen on the destined victim, and on all beneath his roof. A healthful old man, to whom sleep was sweet, the first sound slumbers of the night held him in their soft but strong embrace. The assassin enters, through the window already prepared, into an unoccupied apartment. With noiseless foot he paces the lonely hall, half lighted by the moon; he winds up the ascent of the stairs, and reaches the door of the chamber. Of this, he moves the lock, by soft and continued pressure, till it turns on its hinges without noise; and he enters, and beholds his victim before him.

Webster went on to describe mindset of the murderer after committing the crime, beginning with the initial satisfaction of getting away with it, before the consuming feelings of guilt that inevitably follow.

The secret which the murderer possesses soon comes to possess him; and, like the evil spirits of which we read, it overcomes him, and leads him whithersoever it will. He feels it beating at his heart, rising to his throat, and demanding disclosure. He thinks the whole world sees it in his face, reads it in his eyes, and almost hears its workings in the very silence of his thoughts. It has become his master. It betrays his discretion, it breaks down his courage, it conquers his prudence. When suspicions from without begin to embarrass him, and the net of circumstances to entangle him, the fatal secret struggles with still greater violence to burst forth. It must be confessed, it will be confessed; there is no refuge from confession but suicide, and suicide is confession.

Based on this, many have surmised that the murder – and particularly Webster’s speech – provided inspiration for Edgar Allan Poe’s famous 1843 short story “The Tell-Tale Heart.” In this story, the narrator murders an old man while he sleeps, and then carefully dismembers the body and hides it under the floorboards. At first, he feels pride in having committed such a perfectly-planned crime, but is ultimately driven to confess his guilt after hearing what he believes to be the incessant beating of the dead man’s heart. Many of the detailed descriptions in the story closely echo Webster’s speech, including the end of the story, where the narrator’s guilt steadily consumes him until he finally tells the police “dissemble no more! I admit the deed! –tear up the planks! here, here! –It is the beating of his hideous heart!”

Along with Poe, the murder likely had an effect on Nathaniel Hawthorne, who was living in Salem at the time. Although they would not be written for another two decades, both The House of the Seven Gables and The Scarlet Letter appear to incorporate elements of the crime and the trial. In the former, the elderly and wealthy Jaffrey Pyncheon is apparently murdered by a relative for his money. In the latter, Reverend Arthur Dimmesdale experiences intense guilt regarding his secret affair with Hester Prynne, and the novel traces his mental and physical decline until, after many years, he finally makes a public confession and then dies in the arms of Hester.

In the meantime, Stephen White inherited this house after his uncle’s murder, and in 1834 he sold it to David Pingree (1795-1863), who was yet another prominent Salem merchant. Pingree was born in 1795 in Georgetown, Massachusetts, but spent much of his childhood in Bridgton, Maine. When he turned 18, he returned to Essex County, and began working for his uncle, Thomas Perkins, who owned a merchant business here in Salem. He inherited a substantial fortune after his uncle’s death in 1830, and continued to prosper as a merchant over the next few decades, with a fleet of ships that imported goods from ports throughout Africa, India, Southeast Asia, and the East Indies.

Pingree became known as the “Merchant Prince of Salem,” but by this point the city’s once-prosperous shipping industry was in decline. He evidently saw this coming, and began diversifying his investments before ultimately retiring from the mercantile business altogether in 1848. He was a founder and president of the Naumkeag Bank, as well as the president of the Naumkeag Cotton Company, but much of his wealth ended up in the wilderness of Maine, where he purchased vast tracts of timberland as an investment. During this time, he also played a role in local politics, serving as a presidential elector for Zachary Taylor in 1848 and as mayor of Salem for a single one-year term from March 1851 to March 1852.

Pingree died in 1863, but his widow Ann continued to live here for another 30 years until her death in 1893. Their son David (1841-1932) inherited the house, and also carried on his father’s business interests. Like his father, he served as president of both the bank and the cotton company, and also continued to expand the family’s land holdings in northern Maine. He was a lifelong bachelor, and he evidently resided here alone after the death of his mother, although census records from the early 20th century show that he regularly employed two to three live-in servants.

In 1933, a year after Pingree’s death at the age of 91, his family donated the house to the nearby Essex Institute. It was opened to the public as a museum, and it is now one of the many historic homes that are owned by the Peabody Essex Museum, which was formed in 1992 when the Essex merged with the Peabody Museum of Salem. Today, the front facade of the house is mostly hidden by two trees, but its exterior has not seen any notable changes since the first photo was taken, and it still stands as one of the finest examples of Federal-style architecture in the country.