The old First Congregational Church on the west side of Northampton Street, just north of the corner of Dwight Street in Holyoke, around 1892. Image from Picturesque Hampden (1892). 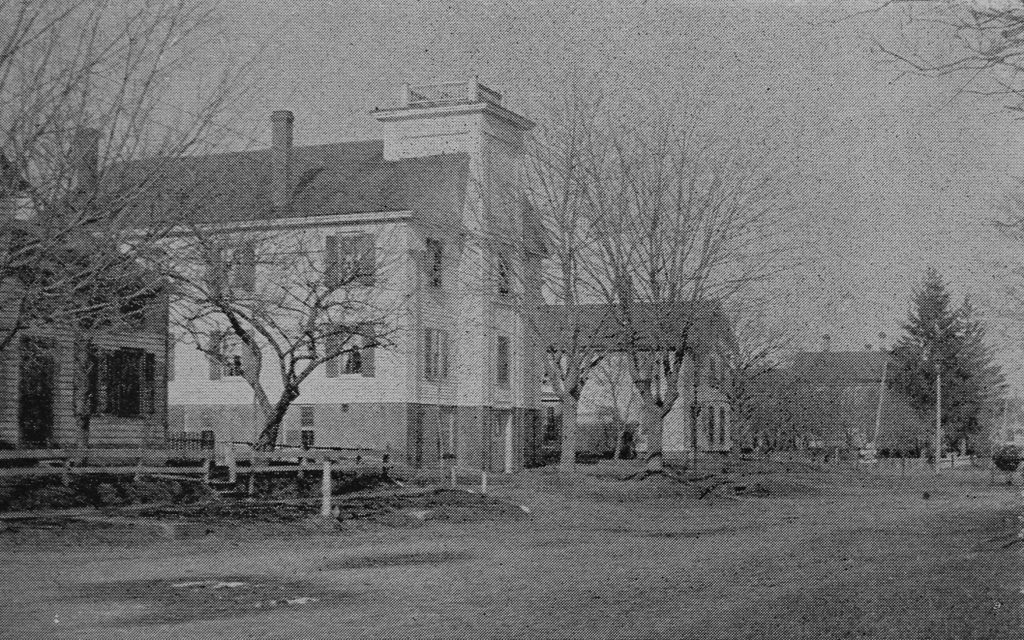 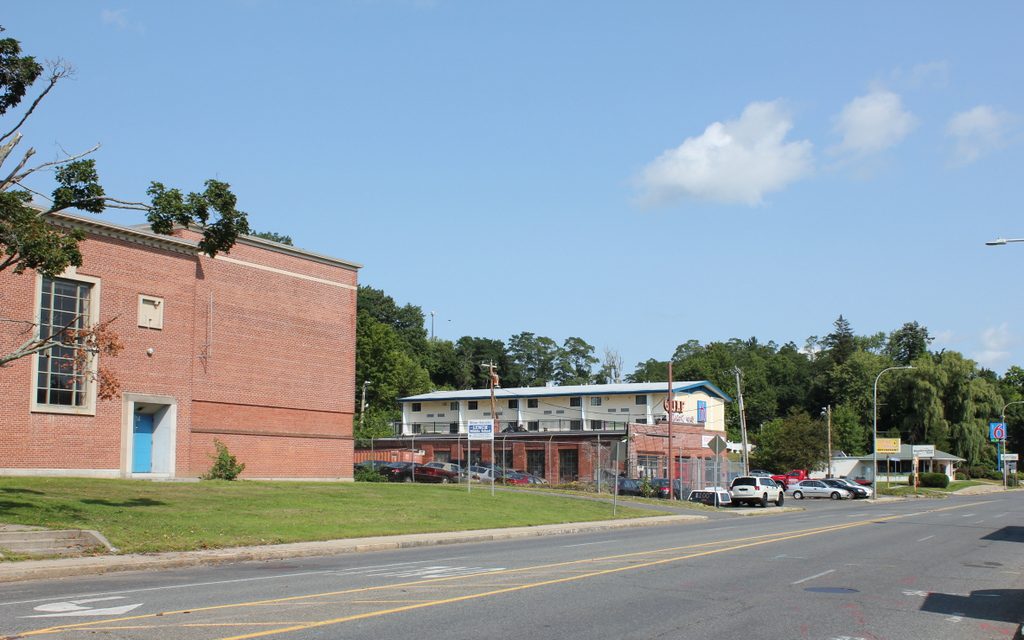 The first church building in present-day Holyoke was built in the 1790s, and was located a little over a mile south of here on Northampton Street, near the site of the current First Baptist Church building. At the time, Holyoke was the northern part of the town of West Springfield, and was variously known as the Third Parish or Ireland Parish. Unusual for a New England settlement of the period, the majority of these early residents were Baptists. However, the parish did have some Congregational families, and in 1799 the First Congregational Church was formally organized with just 11 members. Four years later, the more numerous Baptists established their own church, and called Thomas Rand to be their first pastor.

Both denominations worshiped in the old meeting house, with the Baptists owning three-fourths of the building and the Congregationalists the remaining fourth. As a result, the Baptists held services here for three weeks of each month, and the Congregationalists for the remaining week. However, the latter group did not have their own pastor for many years, and on their designated weeks the pulpit was often supplied by pastors from neighboring towns. Not until the 1820s did they grow large enough to be self-sustaining, and in 1826 they acquired the full use of the old meeting house after the Baptists built a new church building nearby.

A few years later, the Congregationalists also constructed a new building of their own, which is seen in the first photo. It was built at a cost of $1,600, and was dedicated on December 11, 1834, on the same day that Hervey Smith was installed as the first pastor of the church. It was located just north of Crafts Tavern on Northampton Street, roughly opposite present-day Beacon Avenue, and was in a small village that also included a school and several stores. This was the de facto center of Ireland Parish at the time, and the area would remain a part of West Springfield until 1850, when Holyoke was finally incorporated as a separate municipality.

The First Congregational Church enjoyed steady growth after relocating to this building, and Reverend Smith served as pastor until his retirement in 1841. His successor, Gideon Dana, was here for three years before a church council dismissed him, or, as Story of Holyoke Churches (1890) diplomatically phrases it, “after a full hearing voted to advise the dissolution of the pastoral relation.” It would be another two years before the next pastor, Simeon Miller, was installed, but he would remain with the church for nearly 25 years, from 1846 until 1870.

It was during Reverend Miller’s long pastorate that Holyoke underwent the dramatic transition from a rural farming community to a major industrial center. Just a few years after he became pastor, work began on the dam and the canal system, located about a mile and a half east of here on the Connecticut River. By the early 1850s, the riverfront area had already eclipsed the old village as the center of the newly-established town, and in 1849 a Second Congregational Church was established near the new factories. This church drew many members from the First Congregational Church, thanks to its proximity to the new commercial and industrial developments, and in 1853 Second Congregational built a large church building at the corner of High and Dwight Streets, which provided a sharp contrast to the much smaller First Congregational building here on Northampton Street.

Despite the rapid growth in Holyoke’s population over the next few decades, the membership of the First Congregational Church actually declined. By Reverend Miller’s retirement 1870 it had dropped by about 20 percent compared to when he had been ordained, and for more than a decade the church went through a revolving door of pastors, with none staying for more than a couple years. Finally, in 1886 the congregation decided to relocate to a new site that was closer to downtown Holyoke, and the church purchased a lot about a half mile from here at the corner of Pleasant and Hampden Streets. The following year, a chapel was completed there, and the church moved into it after having spent 53 years here in the old church building here on Northampton Street. Then, in 1894, the church completed a larger building that is still standing today on Pleasant Street.

The first photo was taken only a few years after the First Congregational Church left this building. It does not seem clear as to exactly how long the old building remained here, but it appears to have still been standing in the 1911 city atlas. However, like the neighboring Crafts Tavern, it has since been demolished, and today there are no surviving traces of the old Ireland Parish village that was once located here. Northampton Street is now US Route 5, and it is lined with modern commercial development. The site of the church is now a garage in the center of the 2017 photo, and further in the distance a motel now stands where the houses in the first photo were located. On the far left side of the photo is the former John J. Lynch Middle School, which is going to be demolished soon and replaced by retail stores.