Looking south on High Street from the corner of Dwight Street in Holyoke, around 1891. Image from Holyoke Illustrated (1891). 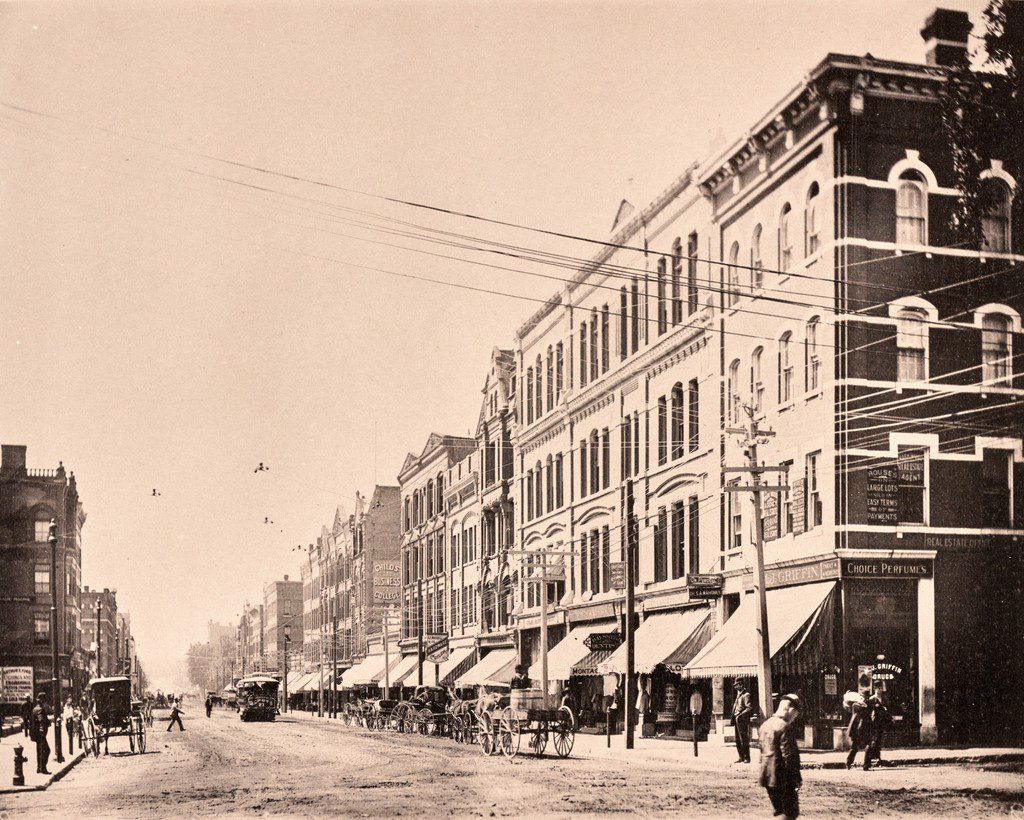 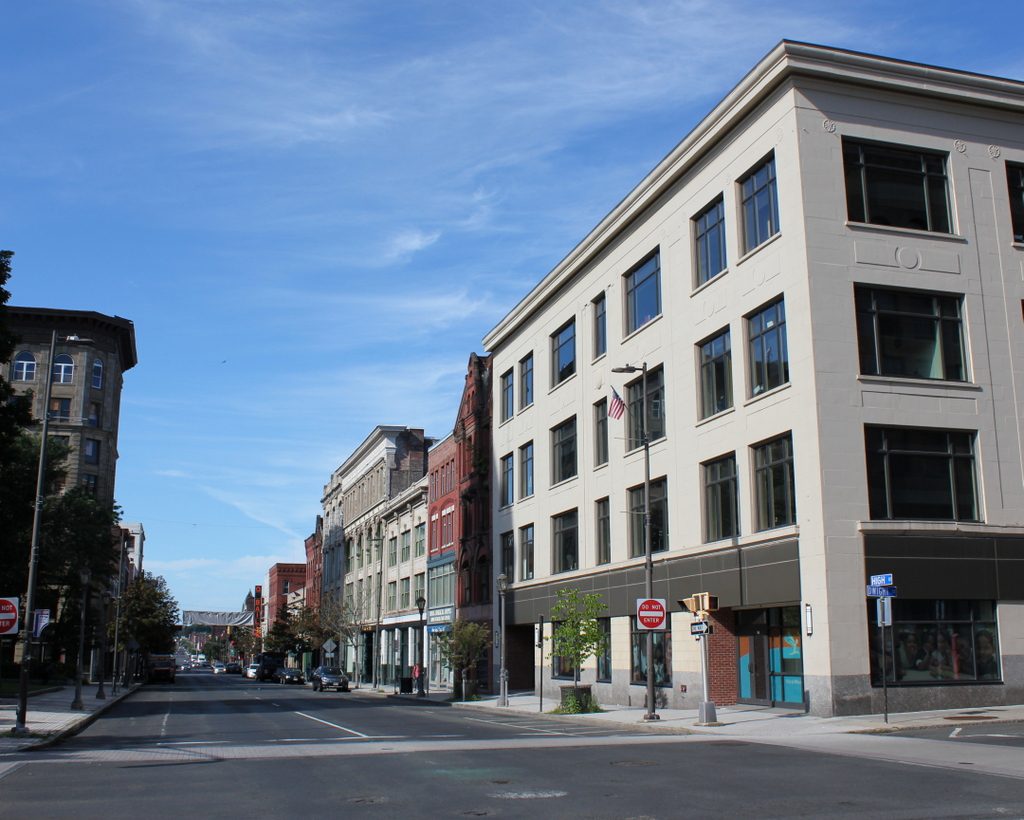 This scene shows the same section of High Street as an earlier post, just from the opposite end of the block, and the first photo above was taken around 15 years earlier than the one in that post. This photo dates back to around 1891, and shows the commercial center of Holyoke during the time when the city was reaching the peak of its prosperity as an industrial center. Just out of view to the left is city hall, and on the right side of High Street was a row of mostly three and four-story brick commercial buildings, each of which had awnings projecting from the ground-floor storefronts. The automobile was still several years away from large-scale production, but the unpaved street was busy with pedestrians and horse-drawn carriages, along with an electric trolley further in the distance.

Most of the buildings in the first photo were relatively new, dating back to around the 1870s and 1880s. The one in the foreground at the corner was perhaps the oldest, featuring Italianate architecture that contrasted with the far more ornate Romanesque Revival-style buildings beyond it. When the first photo was taken, it housed the drugstore of M. J. Griffin on the ground floor, with professional offices on the upper floors. These included a real estate agent whose signs advertised, among other things, “Houses on Large Lots Sold on East Terms of Payment.” Further down the street, other signs advertised for physicians, an attorney, a dentist, a bank, a hardware and cutlery store, and Childs Business College, which was painted on the side of a building in the distance.

Today, nearly all of the buildings in this scene are over a century old, but surprisingly few are still standing from the first photo. The two buildings closest to the foreground are actually still there, although they have been dramatically altered. By the early 20th century, the buildings had become home of the McAuslan and Wakelin department store, and in 1920 they were combined into a single building. They retained their original exteriors for a few more years, but in 1929-1930 the facades were reconstructed with a more modern design, including large windows and minimal ornamentation.

Just beyond the McAuslan and Wakelin building are two older brick buildings. Closer to the foreground is the Russell-Osborne Building, which dates back to around 1885. It once housed the hardware and cutlery shop from the first photo, but later housed a hosiery store and then a shoe store. At some point around the mid-20th century, the original Victorian-era exterior was hidden behind a plain aluminum facade, but this was removed by the 1980s, and today the building looks much as it did when the first photo was taken. To the left of it is the Mayberry Building, which dates back to around 1881. It originally had three stories, but was later expanded to four, and the facade has been heavily altered as well. Beyond it is a newer three-story building, which was constructed in 1912, replacing the earlier one that stood on the site in the first photo.

Probably the most historically significant building in the present-day scene is the Steiger’s building at 259-271 High Street, which is visible in the distance on the right side. It was built in 1899 to house the department store of Albert Steiger, a dry goods merchant who had previously operated a store in Port Chester, New York, before going into business here in Holyoke in 1896. He would later expand his company to include stores across southern New England, including a flagship store that opened in Springfield in 1906. The company would eventually go out of business in the 1990s, and the iconic Springfield store was demolished, but the ornate Classical Revival-style building in Holyoke is still standing here on High Street.

Further in the distance, there are at least two other buildings that still stand from the first photo, including the c.1884 Taber Block at 281-283 High Street and the c.1890 Bishop Block at 284-287 High Street. Overall, though, despite the many changes since the first photo was taken, this scene has remained well-preserved in its early 20th century appearance. The most recent major change to this scene came nearly 90 years ago, when the current facade was added to the building on the corner, and today these buildings are now part of the North High Street Historic District, on the National Register of Historic Places.