Looking north on the Second Level Canal from the corner of Dwight and Race Streets in Holyoke, around 1892. Image from Picturesque Hampden (1892). 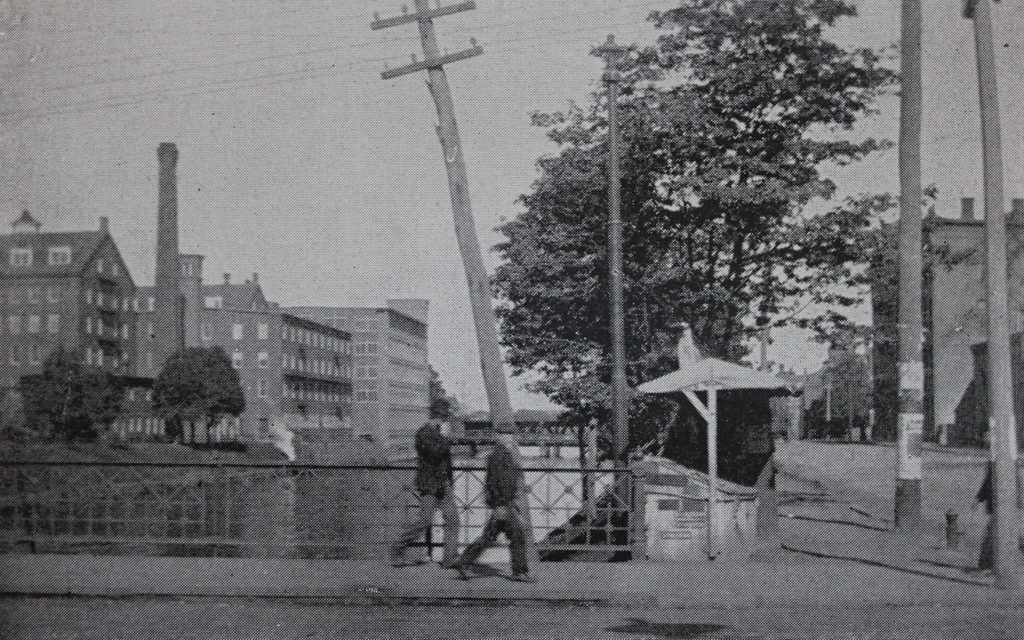 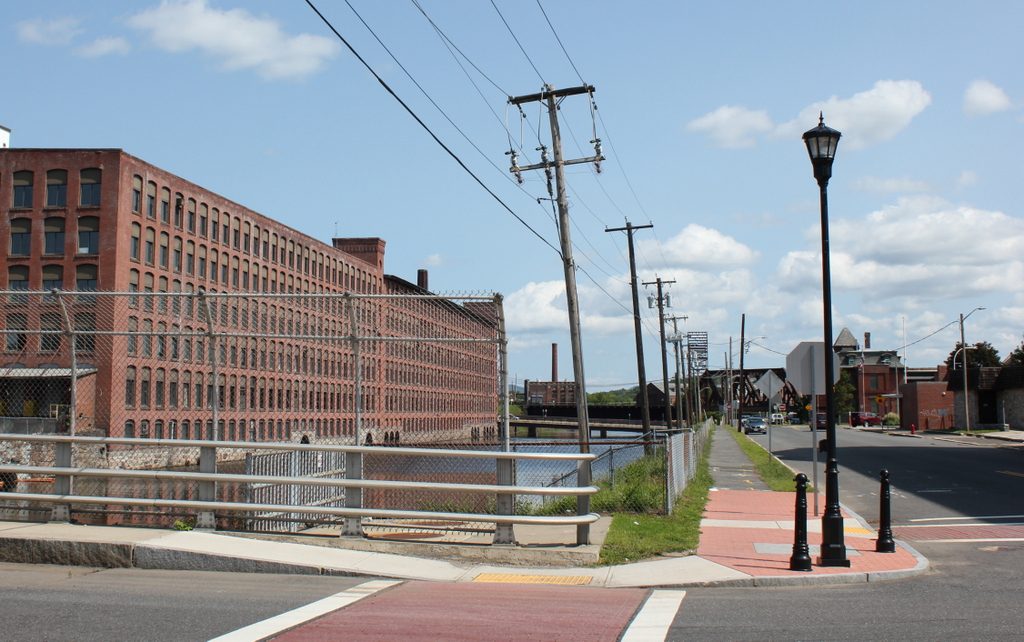 This scene shows the view looking north along the Second Level Canal, facing the opposite direction from the views in an earlier post. On the left side of the canal is the Lyman Mills complex, which was built in stages starting around 1849-1850. The earliest of these buildings were the two gable-roofed buildings on the far left, with the dormer windows on the top floor. They were originally built for the Hadley Falls Company, but were subsequently acquired by the Lyman Mills corporation, which was established in 1854.

The Lyman Mills became a major producer of textiles, and steadily expanded the facility over the years, until it included most of the large block between Lyman Street, Dwight Street, and the First and Second Level Canals. According to the History of the Connecticut Valley in Massachusetts, published in 1879, the mills had a total floor space of 8.5 acres, and operated 1,556 looms and 74,888 spindles. The company employed about 1,200 people, about two-thirds of whom were women. This workforce was largely comprised of immigrants, and many lived in company-owned tenements on the other side of the First Level Canal, near to High Street.

The company had over 1,300 employees by the turn of the century, shortly after the first photo was taken. The mill complex continued to expand during this time, including the construction of the building on the left side of the present-day scene. However, by the 1920s the New England textile industry was in decline, and faced increased competition from southern manufacturers. The Lyman Mills remained profitable, but its shareholders decided to liquidate the company’s assets instead of continuing to produce textiles. As a result, the mills closed in 1927, leaving about a thousand employees without work, and the property was sold to the Whiting Paper Company, whose factory was located directly adjacent to the Lyman Mills, just out of view to the left of the first photo.

The Whiting Paper Company had been founded here in Holyoke in 1865, and over the years it became one of the nation’s largest paper manufacturers. Its founder, William Whiting, served as mayor of Holyoke and was elected to the U. S. House of Representatives, and his son, William F. Whiting, also had a notable political career, serving as Secretary of Commerce during the Coolidge administration from 1928 to 1929. The younger Whiting had taken over the paper company after his father’s death in 1911, and during the late 1920s he oversaw the conversion of the Lyman Mills from textile to paper production. The Great Depression hit soon after, although the company managed to survive, and it remained in business here until closing in 1967.

Today, this scene has undergone many changes in the 125 years since the first photo was taken. Nearly all of Holyoke’s once-prosperous industries are long gone, and the city now faces significant problems with poverty and vacant properties. Many of the historic factory buildings have been demolished, although the former Lyman Mills and Whiting Paper complex is still standing on the left side of the canal. It is now a mixed-use property known as Open Square, and it is part of the ongoing revitalization efforts here along the canals in downtown Holyoke.