The view looking west on Chestnut Street, toward the corner of 6th Street in Philadelphia, around the late 1860s or 1870s. Image courtesy of the New York Public Library. 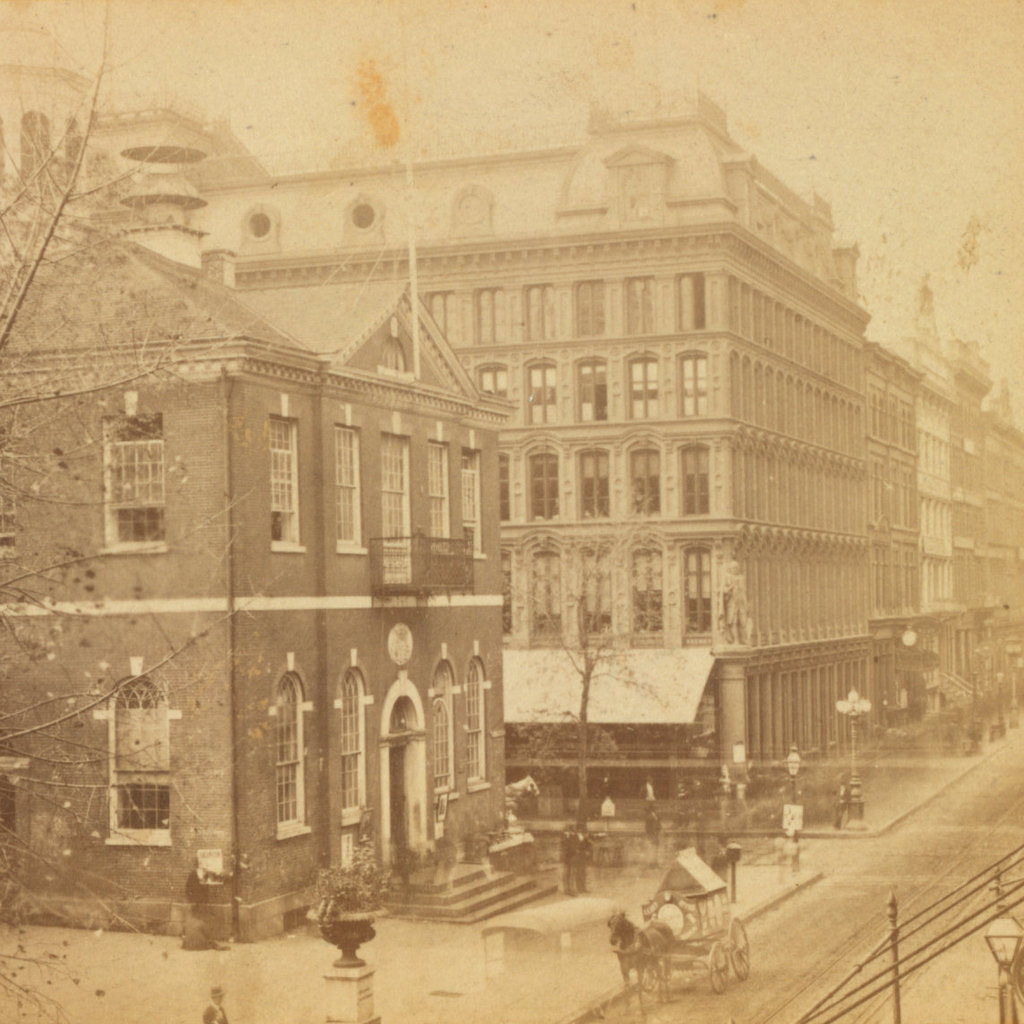 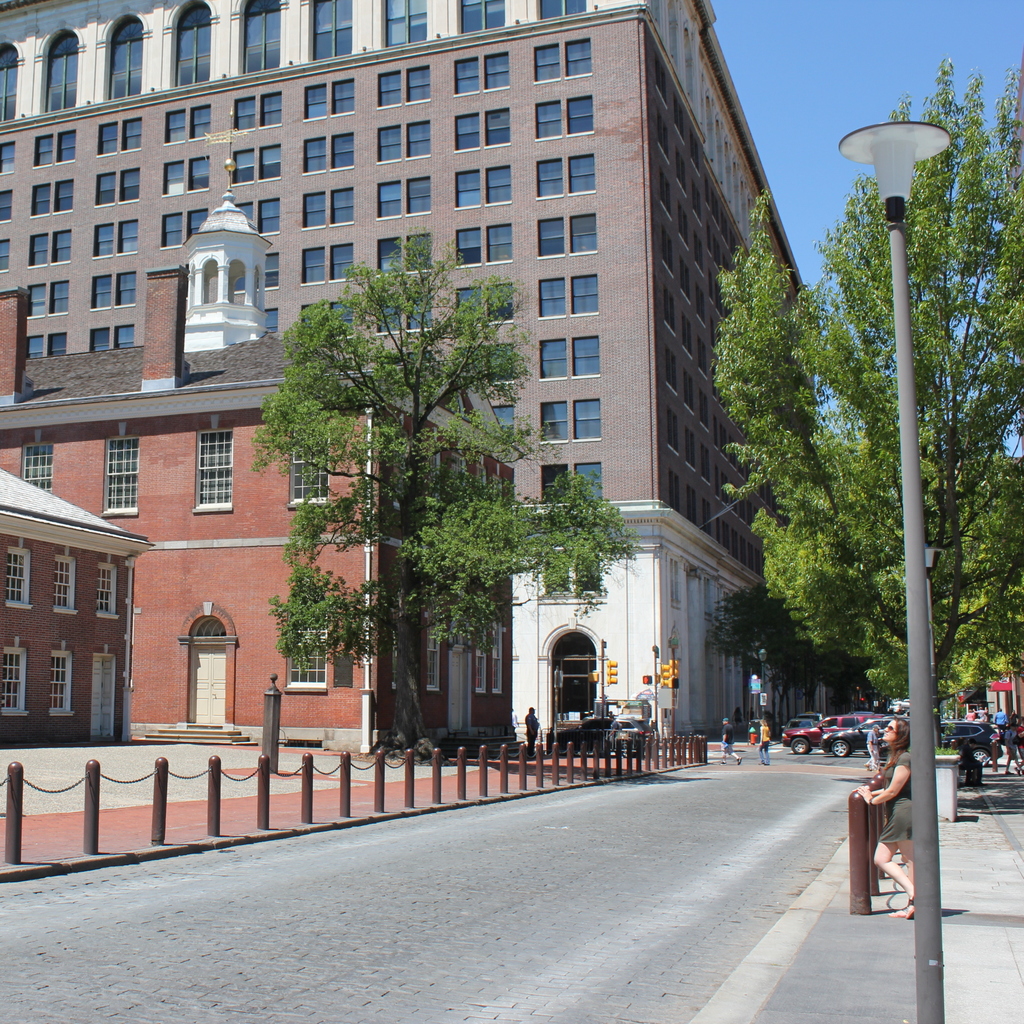 The building on the left side of this scene is Congress Hall, which stands just to the west of Independence Hall on Chestnut Street in Philadelphia. Although smaller and less well-known than its neighbor, this building played an important role in the early history of the United States government, housing Congress for ten years from 1790 until 1800, when the national capital moved to Washington, D.C.

Philadelphia had been the de facto capital city throughout the American Revolution, with the Continental Congress meeting in Independence Hall from 1775 until 1783. However, Congress fled the city in 1783, after being threatened by a mob of soldiers who were demanding payment for their wartime service, and it subsequently met in Princeton, Annapolis, and Trenton, before eventually moving to New York City in 1785. New York served as the capital for the next five years, but Pennsylvania’s inability to protect Congress from rioters had convinced the federal government that it needed a capital city that was not within any state.

In 1790, Congress passed the Residence Act, which established Washington, D.C. as the permanent national capital, but designated Philadelphia as a temporary capital for the remainder of the 18th century. The building here on the left side had been completed a year earlier, in 1789, and it was originally intended as the Philadelphia County Courthouse. It was the work of architect Samuel Lewis, and its brick exterior reflected Federal-style architecture, which was popular during this period, particularly for public buildings. On the interior, the entire ground floor was occupied by the House of Representatives chamber, while the second floor housed the smaller Senate chamber, along with several other rooms.

Congress convened here for the first time on December 6, 1790, and the building went on to serve as the national capitol for the next decade. These were important formative years in the nation’s history, and Congress Hall was the site of many historic events. George Washington’s second inauguration was held here in 1793, in the Senate chamber on the second floor, and it was here that he gave his inaugural address. At just 135 words in length, it remains the shortest inaugural address in presidential history. John Adams was also inaugurated in this building four years later, although the ceremony was held downstairs in the House chamber, and it featured a much longer address by Adams.

During its time in this building, Congress passed a number of important pieces of legislation. The First Bank of the United States, the Post Office, the United States Mint, and the Navy were all established here, and the states of Vermont, Kentucky, and Tennessee were admitted to the Union here, becoming the first states added to the country after the original thirteen. The 1791 liquor tax, which incited the Whiskey Rebellion, was passed here, as were the similarly controversial Alien and Sedition Acts of 1798. Several treaties were also ratified by the Senate here, including the Treaty of Madrid, the Jay Treaty, and the Treaty of Tripoli. In addition, the Bill of Rights, which had been submitted to the states in 1789, was ratified by the requisite number of states in 1791, and was formally added to the Constitution here at Congress Hall.

This building was last used by Congress on May 14, 1800, and six months later Congress convened in Washington, D.C. for the first time. Here in Philadelphia, Congress Hall reverted to its originally intended use as a county courthouse, and the nearby Supreme Court building – which was completed in 1791 with an exterior that was nearly identical to Congress Hall – became the Philadelphia City Hall. Both buildings were subsequently threatened with demolition in the late 19th century, but this was never carried out, and Congress Hall was restored between 1895 and 1913. Upon the completion of this project, the building was rededicated by President Woodrow Wilson, who gave a speech here on October 25, 1913.

Congress Hall was the oldest building in this scene when the first photo was taken, and it is also the only one that has survived to the present day. Just beyond it, on the other side of 6th Street, was a Second Empire-style commercial block that was completed in 1867 as the offices of the Public Ledger newspaper. This was demolished in 1920, and it was replaced by a new building for the newspaper, which spanned the entire length of the block. The Public Ledger has been defunct since 1942, but its former office building is still standing here in the background of this scene.

Today, Congress Hall is part of the Independence National Historical Park, which was established in 1948. From this angle, the exterior has not changed much since the first photo was taken some 150 years ago, although the interior is very different, thanks to the turn-of-the-century restoration project. The building is now open to the public, with National Park Service rangers providing free guided tours of both the first and second floors.