The building at the northwest corner of Main and Cypress Streets in Springfield, around 1938-1939. Image courtesy of the Springfield Preservation Trust. 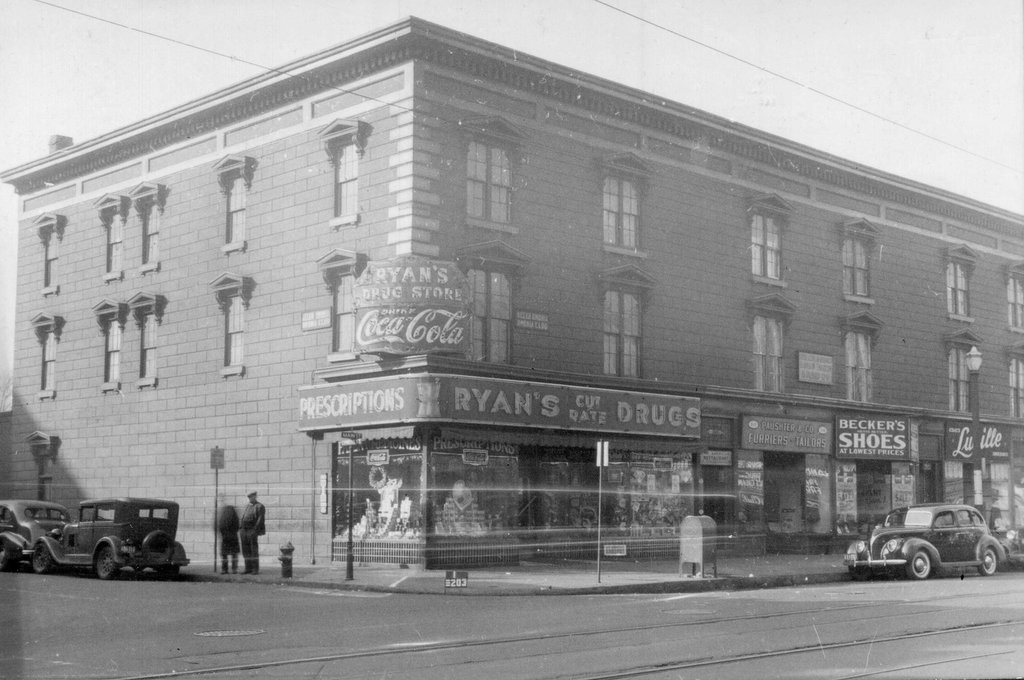 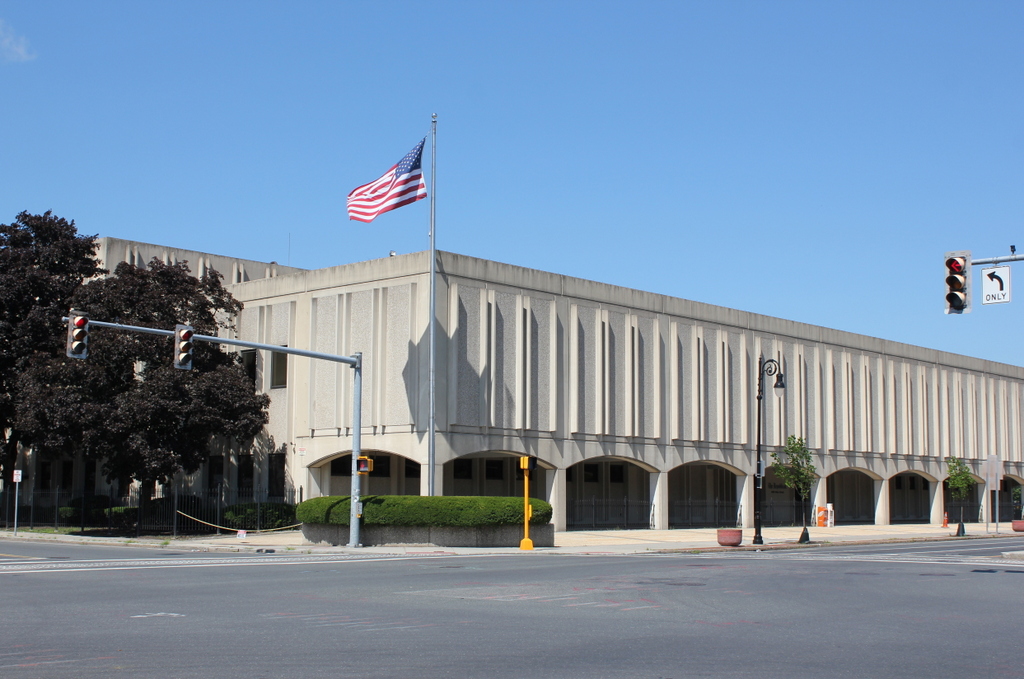 This three-story Italianate-style commercial block was built sometime around the 1850s, and it featured a distinctive faux-stone exterior that was actually made of wood. It was owned by Day & Jobson, a local lumber company that had a planing mill and lumber yard was located a few blocks away, at the corner of Liberty Street (present-day Frank B. Murray Street) and Chestnut Street. The building consisted of a mix of apartments on the upper floors, with retail space on the ground floor, and most of the early commercial tenants sold groceries.

During the late 1860s, there were at least four different stores on the ground floor. Starting on the left side of the building, at the corner of Cypress Street, was A.F. & H.L. Niles, which sold “Teas, Coffee, Butter, Lard, Fish” and other groceries. Right next door was Alonzo Camp, who described himself in the 1869 city directory as “Dealer in Choice Family Groceries and Provisions, Foreign and Domestic Fruits, &c.” Further to the right was John Fox, who specialized in butter and eggs, and to the right of him was butcher John L. Rice & Co., who is listed in the 1869 directory as “Dealer in Fresh and Salt Beef, Pork, Hams, Sausages, Tripe, Poultry, &c. Butter, Cheese, Eggs, Lard, West India Goods, and Family Groceries, and Vegetables of all kinds in their season.”

By about 1876, the corner store – which was numbered 196 Main Street at the time – had become a drugstore, operated by Daniel E. Keefe. He was later listed as a physician in city directories of the 1880s, but his office was still located here, and he also lived here in this building. However, by the early 1890s Dr. Keefe had moved his practice elsewhere, and this storefront was again used as a pharmacy, this time by T. Edward Masters. Over the next few years, several more druggists would occupy this space, including John J. Carmody and Hiram P. Comstock.

In 1912, this corner drugstore was acquired by Charles V. Ryan. A Springfield native, Ryan was born in 1872 as the son of Irish immigrants, and he went on to attend Cathedral High School and the Massachusetts School of Pharmacy. In 1895, when he was just 22 years old, he opened up his own drug store here in the North End, only a block north of this site. He remained there for the next 17 years before relocating to this building, where he would carry on the business for several more decades.

Ryan was still running the drugstore here when the first photo was taken in the late 1930s. The photo also shows several other stores that were located in the building, including Paushter & Co. furriers and tailors, Becker’s Shoes, and the Lucille Dress Shop. Ryan died only a year or two later in 1940, at the age of 68, but his family carried on the business for many more years, starting with his son, Charles V. Ryan, Jr., and then his grandsons, Donald and Robert Ryan. Another grandson, also named Charles V. Ryan, was not directly involved in the drugstore business, but he had a successful political career, serving as mayor of Springfield from 1962 to 1967, and 2004 to 2008.

It was during Ryan’s first stint as mayor that the city’s North End underwent a major urban renewal project. Nearly every building along the Main Street corridor, between the railroad arch and Memorial Square, was demolished during the 1960s, and many of the streets themselves were altered or eliminated. This building was razed sometime around 1967, and the drugstore relocated across the street to the Northgate Center, where it remained until it was acquired by CVS in 1994.

In the meantime, the site of the old building was redeveloped as the new headquarters of the Springfield Union and Springfield Daily News, which opened around 1969. These newspapers subsequently merged to become the Union-News, and in the early 2000s it was renamed the Springfield Republican, reflecting the historical name of the newspaper. The Republican offices are still located here today, although the newspaper recently announced that it is looking to sell the property or lease some of the space to other businesses, since the building contains more office space than the newspaper needs at this point.