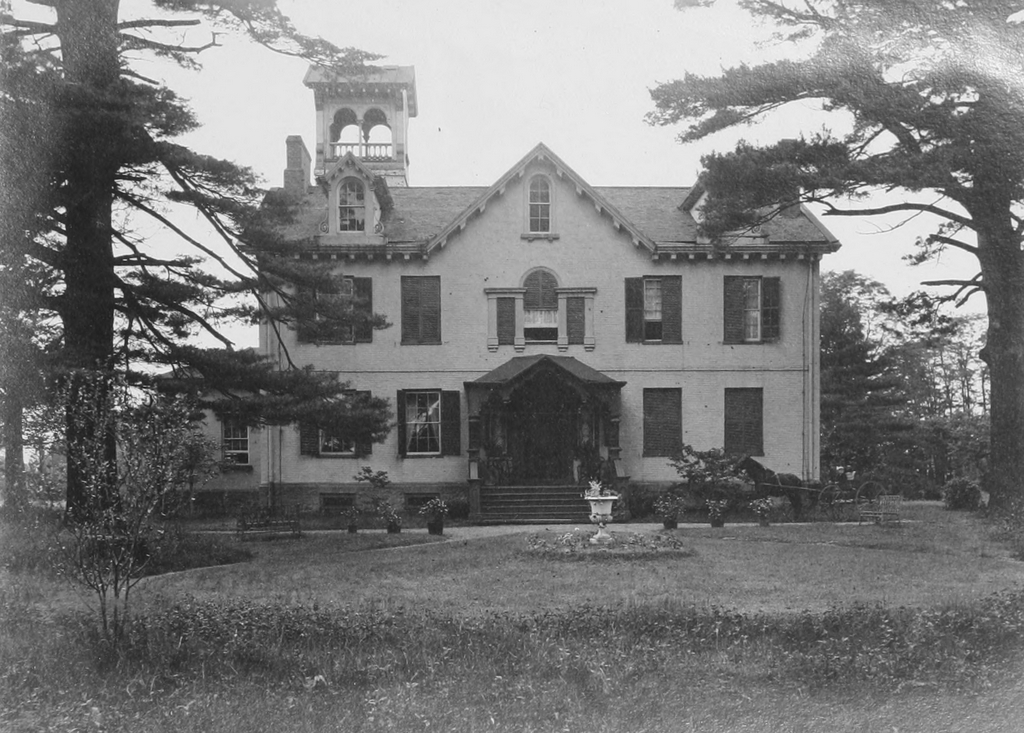 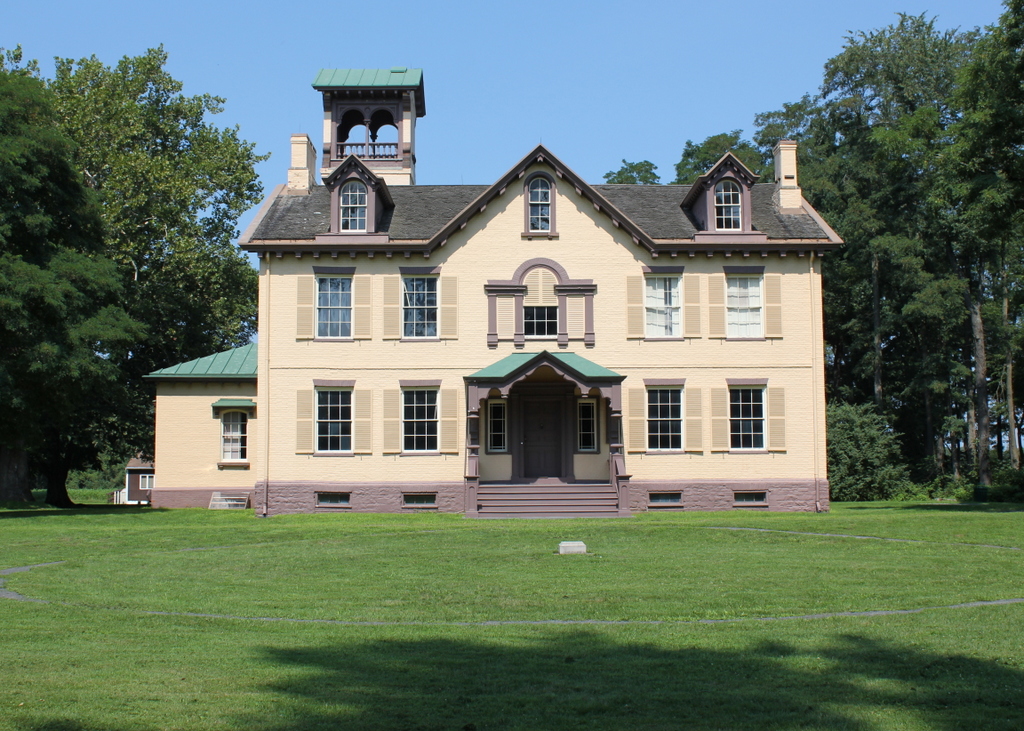 Martin Van Buren was born in 1782 in Kinderhook, a small village in upstate New York about 20 miles south of Albany. He was the first American president to be born as a U. S. citizen, as all previous presidents had been born as British subjects prior to the Declaration of Independence. He came from an old Dutch family that traced its roots back to the former colony of New Amsterdam, and he grew up speaking Dutch as a child, making him the only president to learn English as a second language. Van Buren was born in his father’s tavern on Hudson Street, which is no longer standing, but he spent his later life in this house on the Old Post Road, residing here from 1841 until his death in 1862.

Although Van Buren is generally considered to be one of the more obscure American presidents, he was a shrewd politician who helped to form the basis for the modern Democratic Party. He held a number of political offices during his career, beginning in 1806 when he was elected as the fence viewer for Kinderhook. Despite its decidedly modest-sounding name, fence viewers played an important role in settling disputes between landowners, and Van Buren was subsequently appointed as a surrogate of Columbia County, which involved dealing with wills and estates.

In 1812, Van Buren was elected to the state senate, and he went on to serve as a senator until 1820. For part of this time he was also the attorney general of New York, serving in that capacity from 1816 to 1819. During his time in state politics, Van Buren became a powerful figure, and he was instrumental in setting up a New York political machine that came to be known as the Albany Regency. As a result of his influence, in 1821 the state legislature elected Van Buren to the United States Senate, choosing him over the incumbent Nathan Sanford.

Van Buren remained in the Senate until 1828, when he was elected governor of New York. He took office in Albany on January 1, 1839, but his term was very brief. During the fall elections, Van Buren had allied himself with Andrew Jackson, and in the process he had united former Democratic-Republicans in support of a single candidate, thus avoiding a repeat of the four-way debacle that had occurred in 1824. This move formed the modern Democratic Party, and Van Buren was rewarded in March 1829, when Jackson appointed him as his secretary of state. As a result, he resigned as governor on March 12, and he joined the Jackson’s cabinet later in the month.

After two years as secretary of state, Van Buren was appointed as minister to the United Kingdom in 1831. It was a recess appointment, and he traveled to London while Congress was still out of session. However, upon reconvening in early 1832, the Senate ultimately rejected his nomination, forcing Van Buren to return. Vice President John C. Calhoun had cast the tiebreaking vote against Van Buren in hopes of ruining his career, but it ended up having the opposite effect. Van Buren’s return to America put him in contention for the vice presidential nomination in the 1832 election, and in May the Democratic National Convention chose him to replace Calhoun on the ticket.

Andrew Jackson easily defeated Henry Clay in the general election, and Van Buren was inaugurated as vice president on March 4, 1833. Over the next four years, he remained one of Jackson’s most important advisors, and after Jackson declined to run for a third term, Van Buren became his logical successor for the 1836 election. He ran essentially unopposed for the Democratic nomination, and was the party’s unanimous choice at the convention. He went on to win the fall election, with the nascent Whig Party splitting their voters among four different candidates.

Despite his successful political career prior to the presidency, Van Buren’s single term as president was mediocre at best. It was largely defined by the Panic of 1837, an economic recession that began only months after he was inaugurated. His response to the crisis was largely ineffective, leading his Whig opponents to ridicule him as “Martin Van Ruin” during his 1840 re-election bid. This recession, combined with the growing strength of the Whig Party, doomed him in the general election, and he lost in a landslide to William Henry Harrison.

After leaving the White House in 1841, Van Buren returned home to Kinderhook, where he had purchased this house two years earlier. The home, originally known as Kleinrood, had been built around 1797 by Peter Van Ness, a judge on the Court of Common Pleas. Van Ness was in his early 60s at the time, and he was a veteran of the American Revolution, having served as a colonel in the state militia. He died here in 1804, and his son William Peter Van Ness subsequently inherited Kleinrood. William was also a judge, serving at the federal level as a United States District Court judge from 1812 until his death in 1826, at the age of 48. He owned this house for most of his time on the bench, but he ultimately lost it at auction in 1824, when it was sold to pay for a lawsuit judgment against him.

Kleinrood was purchased by William Paulding Jr., a former congressman who went on to serve as mayor of New York City from 1825 to 1826, and 1827 to 1829. Paulding lived in New York City, and he already had a summer residence in Tarrytown, so he never actually lived here. However, he owned Kleinrood for the next 15 years, including the house and the surrounding 137 acres. He evidently made few improvements to the property during this time, and it was in poor condition by the time he sold it to Martin Van Buren in 1839 for $14,000.

Prior to purchasing this property, Van Buren had never owned a house of his own. Nevertheless, he gladly took on the challenge of managing and improving a large farm, perhaps hoping to emulate earlier presidents such as Washington, Jefferson, and Jackson, all of whom were famous for their grand estates. Van Buren soon set about making changes and improvements, including changing the name from Kleinrood to Lindenwald. He also built stables and other outbuildings, and he made some alterations to the interior of the house. The most dramatic change inside the house was the removal of the original staircase, creating a central hall on the first floor that could be used for banquets and other large events.

When he moved into the house in 1841, Van Buren did not envision it as his retirement home. He was 58 years old at the time, and he hoped that he would be able to recapture the White House in 1844. However, he failed to receive enough votes at the Democratic National Convention, in part because of his opposition to the annexation of Texas, and the party’s nomination ultimately went to James K. Polk. By the next presidential election, Van Buren had drifted even further from the party that he had founded, becoming a strong opponent of slavery. In 1848, he received the nomination of the Free Soil Party, and in the general election he received more than 10% of the popular vote, although he did not win any electoral votes. However, his candidacy likely cost Democrat nominee Lewis Cass the election by splitting the vote and allowing Zachary Taylor to win.

In the meantime, Van Buren continued to improve Lindenwald, he and steadily grew the property through additional land acquisitions. The house itself also underwent an expansion, which occurred in 1849 after his youngest son, Smith Thompson Van Buren, moved into the house with his family. For this work, Smith hired noted architect Richard Upjohn, who designed an addition on the rear of the house. The most notable feature of this addition was a five-story Italianate-style tower, which stands on the left side. Overall, though, Upjohn’s alterations were probably not among his best works. The result of his work was a rather muddled blend of architectural styles, with the house featuring elements of Federal, Gothic, and Italianate architecture.

Martin Van Buren had been a widower since the death of his wife Hannah in 1819, at the age of 35. Smith’s wife Ellen similarly died young in 1849, shortly after they moved to Lindenwald and before the addition was completed. However, while the former president never remarried, his son Smith married for a second time in 1855, to Henrietta Eckford Irving. Smith and Henrietta continued to live here at Lindenwald until 1862, when Martin Van Buren died here in his bedroom on the second floor. Smith and his family subsequently moved to Beacon, New York, and the house was sold out of the family in 1864.

Over the next decade, Lindenwald continued to be operated as a working farm, although it changed hands three more times by 1874, and none of these owners personally lived here. Then, in 1874 it was purchased by brothers Adam and Freeman Wagoner, who lived in the house and ran the farm. Adam ultimately gained sole possession of the property, and he owned it until 1917. The first photo was taken during his ownership, showing the exterior of the house as it appeared in the early 20th century. Both the house and the surrounding grounds were well-maintained, and the house was flanked by tall white pines on either side of the photo.

After Wagoner sold Lindenwald in 1917, it went through several more ownership changes over the next 40 years. During this time, most of the land was sold off, leaving only 13 acres by 1945. The condition of the house itself also declined, and it was altered in the late 1950s by the addition of a two-story columned porch on the front. This porch was vaguely reminiscent of the one at Mount Vernon, but it hardly matched with the rest of the house, and instead only added to the architectural confusion of its design. The owner who added the porch was an antique dealer, and around the same time he also opened a shop here on the property.

The house steadily deteriorated until 1973, when it and the surrounding 13 acres were purchased by the National Park Service. A year later, the Martin Van Buren National Historic Site was established here, and the house was subsequently restored to its appearance when Van Buren lived here. It opened to the public in 1988, and more than 30 years later it continues to be run by the National Park Service, with few significant differences in its appearance since the first photo was taken over a century ago.