The Main Arsenal at the Springfield Armory, seen from Armory Square around 1892. Image from Picturesque Hampden (1892). 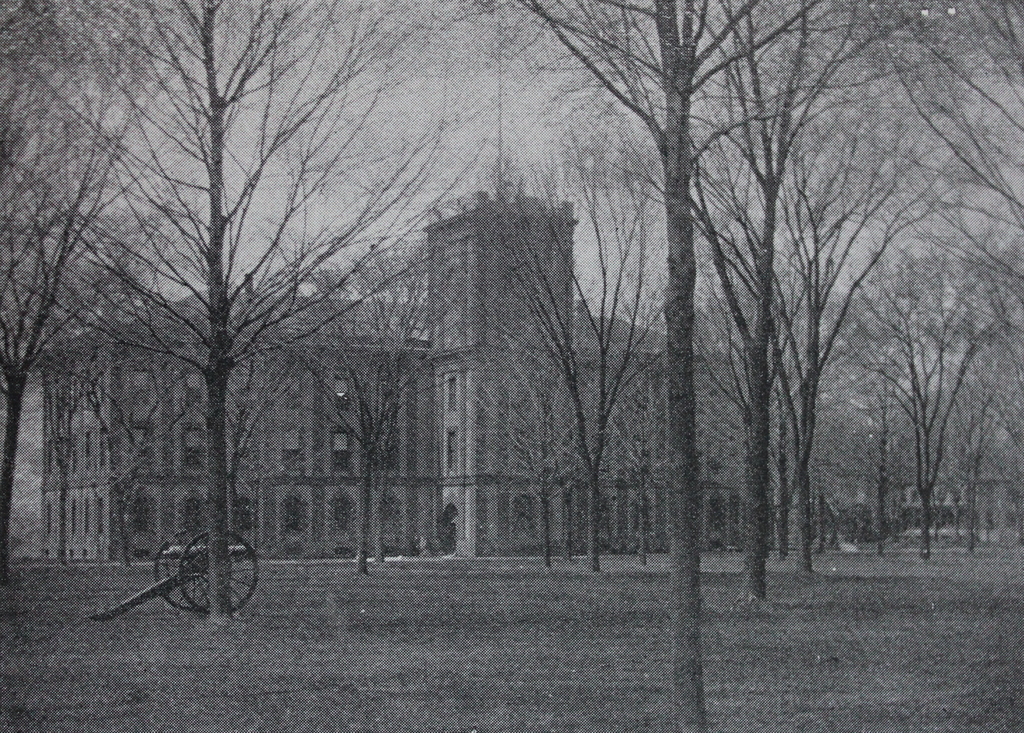 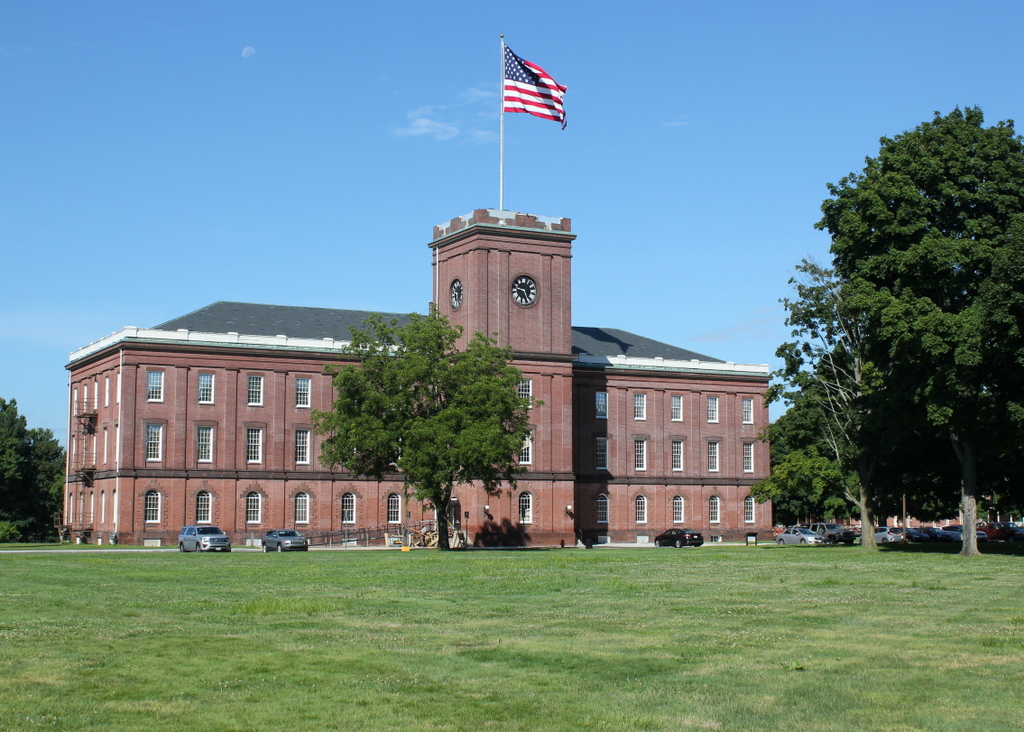 The origins of the Springfield Armory date back to 1777, when the Continental Congress established an arsenal here on a bluff overlooking the downtown area of Springfield, on the north side of State Street. The location was ideal, as it was at the crossroads of major trade routes, and it was also upstream of the last rapids on the Connecticut River, which protected Springfield from the threat of British naval attack. General Henry Knox, who had passed through Springfield a year earlier to bring captured cannon to Boston, was a strong advocate of this site, describing it as “perhaps one of the most proper Spots in America on every Account.”

During the American Revolution, the arsenal consisted of a small group of buildings, none of which are still standing, and the facility’s primary purpose was to store and repair weapons, and produce cartridges. After the war, it continued to be used as storage for muskets and powder, and in 1787 it was the scene of the last major battle of Shays’ Rebellion. The rebels had attempted to seize the munitions here, but they were ultimately defeated by a state militia force that assembled to protect the arsenal. However, the event had a significant impact on American history. Occurring only months before the Constitutional Convention, it helped to demonstrate the weaknesses of the Articles of Confederation and the need for a new, stronger national government.

In 1794, Congress authorized two federal armories for the production of small arms, with one in Harpers Ferry, Virginia and the other here in Springfield. This site here on State Street would continue to be the primary facility, but the armory also included several shops along the Mill River, located about a mile south of here. Much of the manufacturing was done at these shops, where the river could be harnessed as a source of power. However, other work was done here on State Street, and this location is also where raw materials and finished firearms were stored.

The armory steadily grew during the first half of the 19th century, but the most significant changes came in the 1840s, when superintendent Major James Ripley oversaw a major expansion of the facility. The most notable of these additions was a new main arsenal, which is shown here in these two photos. It was completed in 1850 on the west side of Armory Square, and it could store 300,000 muskets on its three floors. The most notable feature on the exterior of the building is the tower here on the eastern side, which rises 89 feet above the ground level. Because of its location on higher ground above downtown Springfield, the tower has long been a distinctive part of the skyline, and it has become a symbol of Springfield itself, appearing at the top of the city seal since 1852.

In retrospect, Major Ripley’s improvements here at the armory came just in time. By 1850, it was producing over 20,000 guns per year, but this would dramatically increase in 1861, with the onset of the Civil War. That same year, the Harper’s Ferry armory was destroyed, leaving Springfield as the only remaining federal armory. To supply the needs of the Union army, the workforce here increased from 200 to over 2,600, and in 1864 the armory produced over 276,000 rifles. The total output here at the armory during the war was over 800,000 guns, which was more than it had made in the previous 66 years combined.

No Civil War battles occurred anywhere near Springfield, but the armory did survive one threat in 1864, when two would-be saboteurs planted a bomb here in the main arsenal, in the tower near the clock. Despite the fact that the country was in the midst of war, the armory was evidently still open to the public, and two strangers persuaded a reluctant arsenal keeper to bring them up to the top of the tower, supposedly to see the view. Later that night, a watchman found a suspicious bundle near the clock, which had apparently been left by the two men. A subsequent inspection revealed that it had a fuse and was filled with powder, although it probably would not have done much damage to the building even if it had detonated.

The first photo was taken less than 30 years later, in the early 1890s. The armory was still a vital part of the country’s small arms production, and it would remain in use for much of the 20th century. During this time, the facility also played an important role in developing new firearms, including the M1903 and the M1 Garand. The latter was designed by—and named for—John Garand, a Springfield resident who worked here at the armory as a civilian employee. It became the standard-issue Army rifle throughout World War II, and about 3.5 million were produced here in Springfield during the war.

After the war, the armory was used primarily for research and development, with most of the production being outsourced to private contractors. The M14 rifle was designed here during this period, as were other weapons such as machine guns and grenade launchers. However, the facility was ultimately closed in 1968, resulting in a loss of nearly 2,500 jobs.

Following the closure, much of the property was turned over to the state of Massachusetts, becoming the campus of Springfield Technical Community College. The college constructed some new buildings here, and converted the old armory buildings into classrooms and offices. However, the federal government retained control of the western part of the armory, including the main arsenal and the commandant’s house, which stands in the distance beyond the trees on the right side of the scene. Both buildings are now preserved as part of the Springfield Armory National Historic Site, which is run by the National Park Service. As shown in the present-day scene, the arsenal’s exterior appearance has hardly changed since the 19th century, and the first floor of the building is now a museum, housing an extensive collection of firearms and machinery.