The statue of Captain John Parker, on the Lexington Common at the intersection of Bedford Street and Massachusetts Avenuen, around 1900-1901. Image courtesy of the Library of Congress, Detroit Publishing Company Collection. 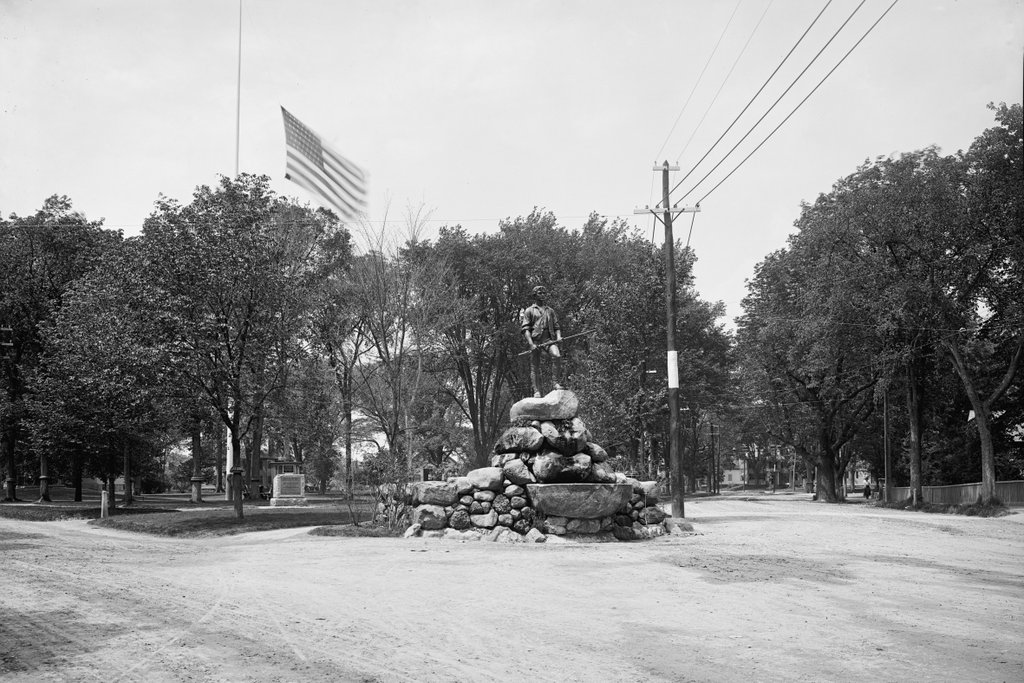 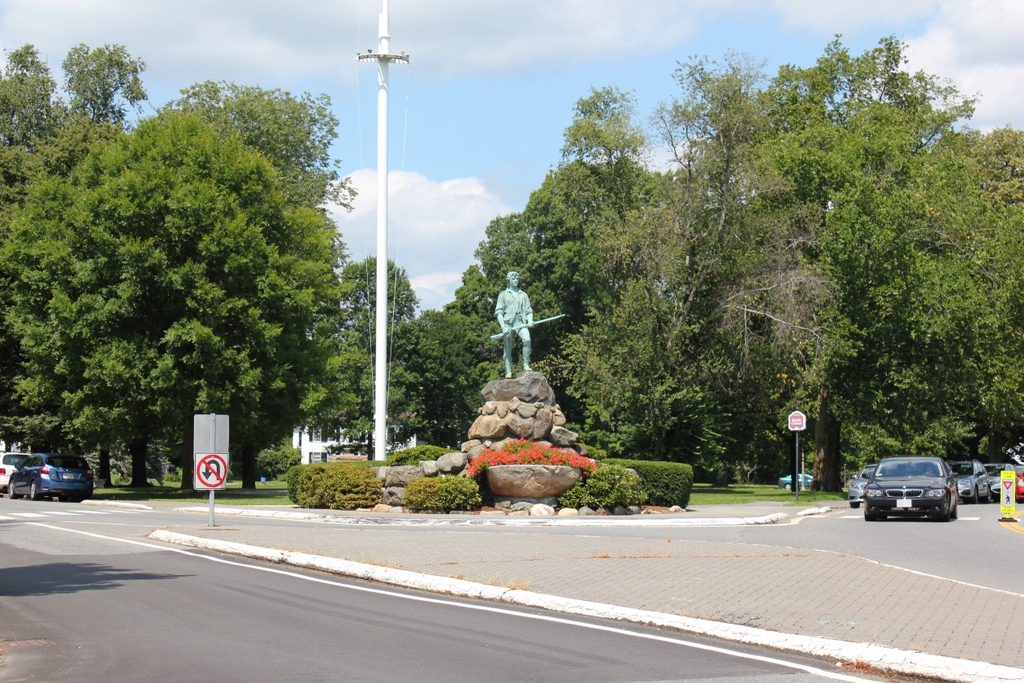 As discussed in more detail in the previous post, the Lexington Common is famous for being the site of the first battle of the American Revolution, which occurred here on April 19, 1775. Early on that morning, a group of some 80 Lexington militiamen gathered here on the Common, in preparation for the arrival of a large British force headed for Concord. In the short skirmish that followed, the militiamen, under the command of Captain John Parker, exchanged fire with the British. The result was eight dead militiamen and another ten wounded, compared to only one wounded redcoat. The British continued on to Concord, but the confrontation here in Lexington marked the opening shots of the conflict that ultimately led to American independence.

Captain Parker survived the battle, although his cousin Jonas Parker was among the eight who were killed. However, the 45-year-old Parker was dying from tuberculosis at the time, and the disease ultimately took his life less than five months later. Despite his short service in the war, though, he is regarded as one of the heroes of the battles of Lexington and Concord, in part because of his famous—but possibly apocryphal—command to his men prior to the battle, instructing them to “Stand your ground. Don’t fire unless fired upon, but if they mean to have a war, let it begin here.”

In 1884, these words were inscribed on a boulder on the Lexington Common, which marks the spot where his militia company stood during the battle. Then, in 1900 Captain Parker became the subject of another memorial here on the Common, which is shown in this scene. Officially known as the Hayes Memorial Fountain, it originally featured a water fountain and a watering trough for horses, and it was topped by a bronze statue of Captain Parker. The statue was the work of noted sculptor Henry Hudson Kitson, although Parker’s appearance was largely conjecture, as there are no surviving portraits of him.

The monument was dedicated on April 19, 1900, on the 125th anniversary of the battle. The ceremony included an address by town selectman George W. Sampson, who praised the egalitarian nature of its design, noting:

The drinking fountain itself, built of rough breastwork stone, is emblematical of the spirit of equality and democracy. Best of all, the figure itself carries us back to the historic past and teaches the lesson of April 19. The statue is true to life. No aristocratic figure surmounts yonder heap of rocks, and none were in the battle.

The first photo was taken sometime within a year or two after the dedication. It shows the fountain in the center of the scene, along with several other monuments on the Common. In the distance to the left is the stone pulpit, which marks the site of the town’s first three meeting houses. Just behind this pulpit is an elm tree that had been planted by President Ulysses S. Grant some 25 years earlier, as part of the battle’s centennial celebration. However, probably the most notable feature in the first photo, other than the statue, is the large 45-star flag that is flying above the Common.

Today, around 120 years after the first photo was taken, the statue remains a prominent landmark in downtown Lexington. The fountain itself is no longer in use, perhaps because there is now far less demand for horse watering troughs, and the basin is now used as a flower planter. There are also now a number of shrubs planted around it, but otherwise the monument itself has not seen any changes. Further in the distance, the stone pulpit is also still there, although President Grant’s elm tree is long gone, having probably fallen victim to Dutch Elm Disease at some point in the mid-20th century.