The house at 242 Monument Road in Concord, around 1908. Image courtesy of the Library of Congress, Detroit Publishing Company Collection. 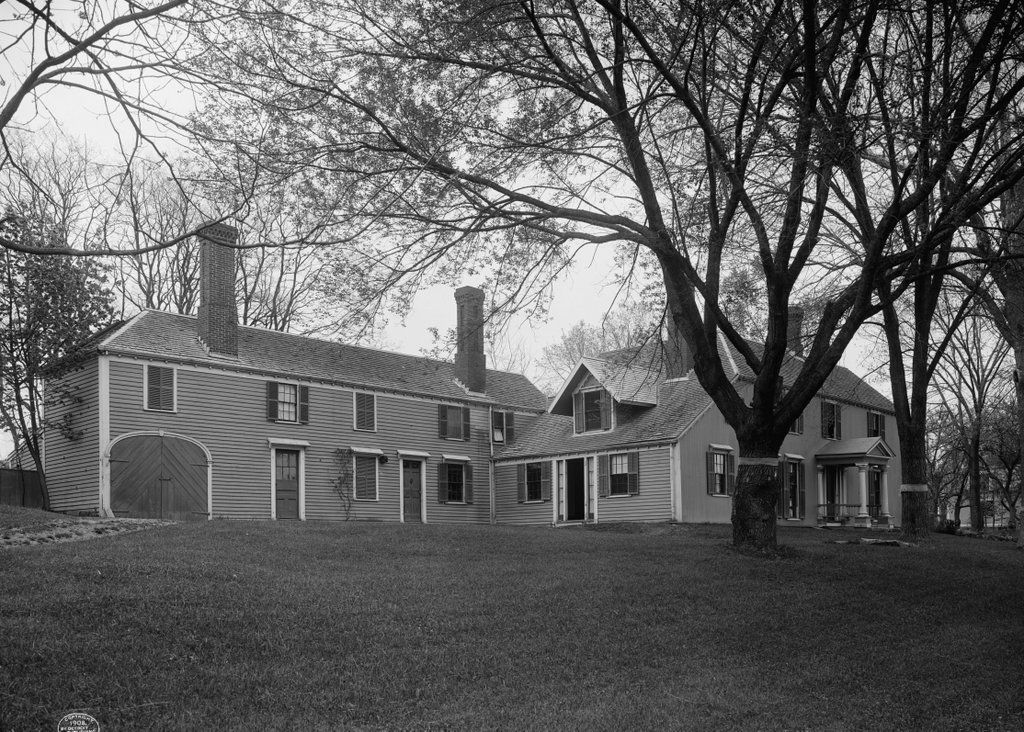 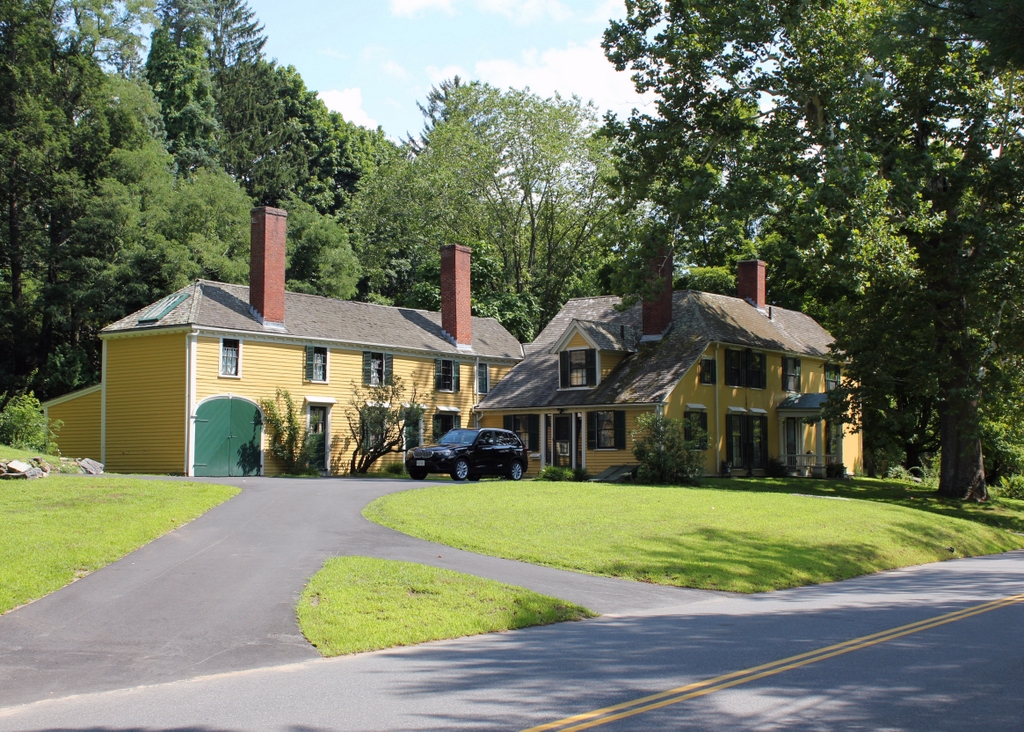 The age of this house is somewhat of a mystery, with some sources claiming that it dates as far back as the mid-17th century. However, it was probably built sometime around 1740 as the home of Thomas Jones, a blacksmith who lived here until his death in 1774. His son Elisha then inherited the property, and he went on to become perhaps the most notable occupant of this house.

Elisha Jones was about 30 years old when inherited the house. Like his father and grandfather, he was also a blacksmith, and he was evidently a wealthy man, with an estate that was valued at 1,121 pounds 8 shillings in 1777. In addition, he served in the local militia, where he held the rank of lieutenant during the American Revolution, and prior to the war his house was reportedly one of the places in town where colonial military supplies were hidden from the British.

However, Elisha Jones and his house are best known for an incident that may or may not have occurred here on April 19, 1775, during the Battle of Concord. The house is located across the street from the Old North Bridge, where the famous “Shot heard round the world” was fired by the colonial minutemen, and according to legend Jones was standing at the door of his shed after the battle, watching the retreating soldiers. One of them is said to have fired at him, although the ball missed Jones by about three feet, and instead passed harmlessly through the wall.

This large shed, which was later attached directly to the main house on the left side of this scene, still has a hole in the wall, which is supposedly where the British musket ball struck the building. However, it is difficult to prove exactly what caused this hole, and there are no contemporary accounts of this incident. The earliest published description came many years later, and it was written by John Shepard Keyes, the late 19th century owner of this house. He heard the story from Elisha Jones’s oldest daughter Mary, who was four years old at the time of the battle, and he wrote the following description in his book, Story of an Old House:

Mr. Jones had prudently taken his wife and babies down cellar, where they cowered in fear and trembling in the dark corners, while he stood guard over the barrels of beef. Soon the clatter and noise of the Britishers ceased, and all was still. Then the silence was broken by the volleys of musketry at the bridge. He could stand it no longer, but rushing up from the cellar followed by his wife and crying children, they saw the regulars retreating in confusion back to the village, bearing their wounded, some with ghastly faces, supported by their comrades, others with bloody limbs hastily bandaged to stanch the flow. . . .

To her father it lent new excitement and patriotic rage; he pointed his gun out of the bedroom window on the north-west corner of the house, determined to have one raking shot at the foe. His wife clung to his arm, begging him not to risk their burning the house if he fired from it, and succeeded in preventing his purpose and getting the gun away. Then he went to the door of the shed, and stood there looking at the retreating soldiers in scorn and triumph. One of the rear guard who may have seen his attempt to shoot, or “misliked his look,” drew up as they passed the house, and fired a “British musket ball” at Elisha. It was a well pointed shot considering that the red coats fired from the hip, and not from the shoulder with a sight along the gun barrel, as the Yankees did. The ball struck at the height of Jones’ head about three feet to the right, and passing through the boarding, glanced from an oak joist, and out through the back side into the ground behind.

It is impossible to conclusively prove or disprove this story, but in either case it has become a part of local legend, and it has contributed to the fame of the house, which is sometimes referred to as “The Bullet Hole House.” In the meantime, though, the property remained in the Jones family for many years, with Elisha’s son James Jones inheriting it after his death in 1810. James, like the previous three generations of his family, was also a blacksmith, and he owned this house until 1836, when he sold it to Nathan Barrett for $800.

Barrett evidently never lived here, instead using the house as a rental property, and over the years it fell into disrepair. He ultimately sold the house in 1863 to John Shepard Keyes, who soon set about restoring the house and documenting its history. Keyes was a Concord native who was about 42 years old at the time. He was a lawyer, and he had previously served as sheriff of Middlesex County from 1853 to 1859. In 1860, he was a delegate to the Republican National Convention, which nominated Abraham Lincoln to the presidency, and a year later he became a U. S. Marshal. He also served as a bodyguard for Lincoln, and he accompanied him during his inauguration and during the Gettysburg Address. Keyes went on to serve as a marshal until 1867, and in 1874 he became a judge on the Middlesex District Court.

After purchasing this property, Keyes soon oversaw dramatic alterations to the house. On the exterior, this included replacing the windows, installing a second-floor dormer window on the north side, and adding a portico to the front door. Keyes also moved the shed and attached it to the north side of the house, turning it into a large two-story wing. Overall, most of the house’s present-day appearance dates back to this mid-1860s renovation.

John Keyes lived here in this house with his wife Martha until her death in 1895, and he remarried three years later. He was still residing here when the first photo was taken around 1908, more than 40 years after he first moved in, and he remained here until his death in 1910 at the age of 88. His daughters, Alicia Keyes and Annie Emerson, then inherited it, although only Alicia appears to have actually lived here after her father’s death. Annie gained full ownership of the property after Alicia’s death in 1924, and a year later she sold it to Henry H. Fay.

Fay was the last private owner of the house, and he lived here until 1963, when he sold it to the National Park Service. It then became a part of the Minute Man National Historical Park, which had been established in 1959 to preserve the historic sites associated with the battles of Lexington and Concord. Since then, the house has been well-preserved in its post-1860s appearance, with hardly any changes from this view since the first photo was taken more than a century ago. However, because of these renovations it bears little resemblance to its appearance during the American Revolution, and it is not open to the public for tours, with the National Park Service instead using it as a rental property.