The Towns Hotel, later known as the Hotel Windham, on the east side of the Square in downtown Bellows Falls, in the aftermath of an April 12, 1899 fire. Image courtesy of the Rockingham Free Public Library. 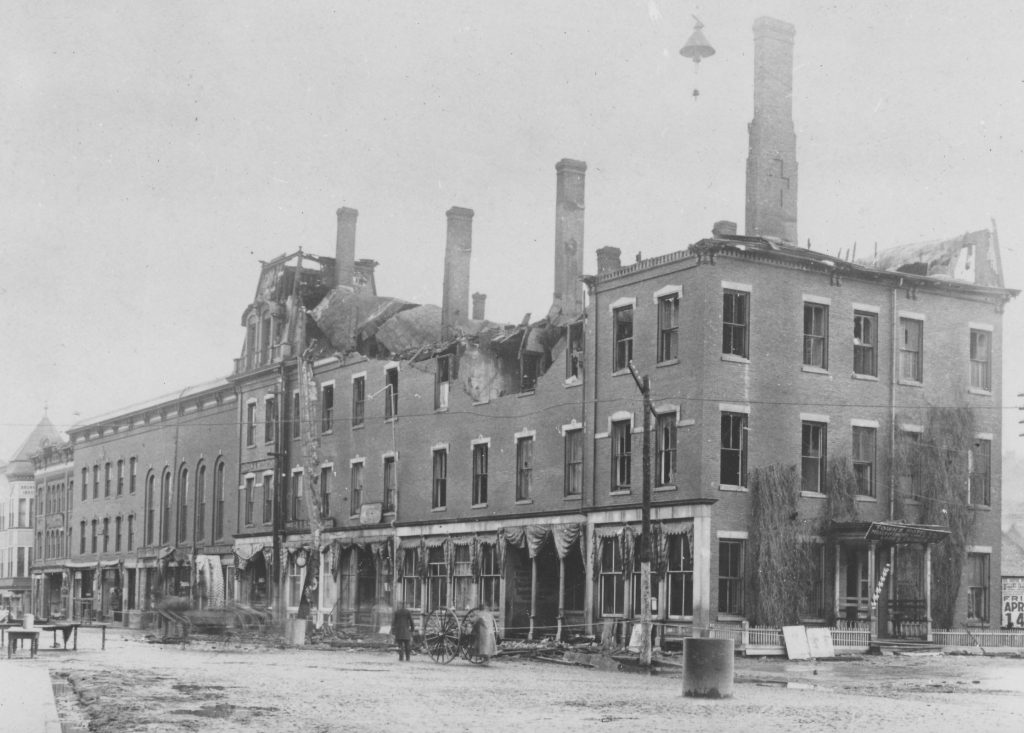 The rebuilt hotel around 1900-1912. Image courtesy of the Rockingham Free Public Library. 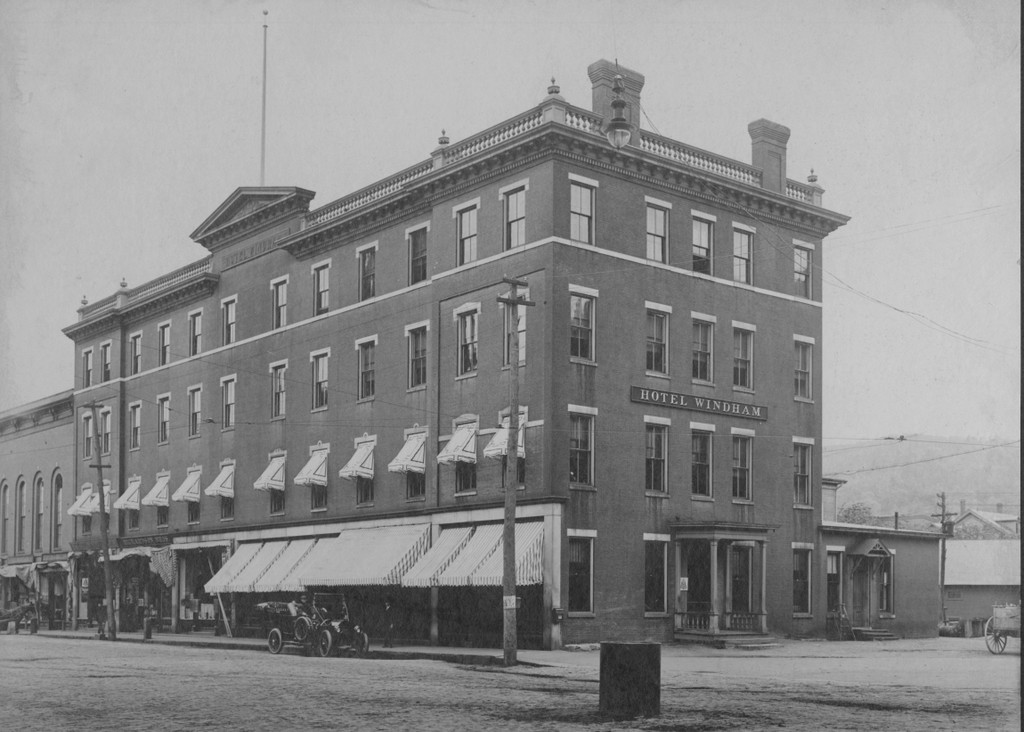 The hotel in the aftermath of a March 26, 1912 fire. Image courtesy of the Rockingham Free Public Library. 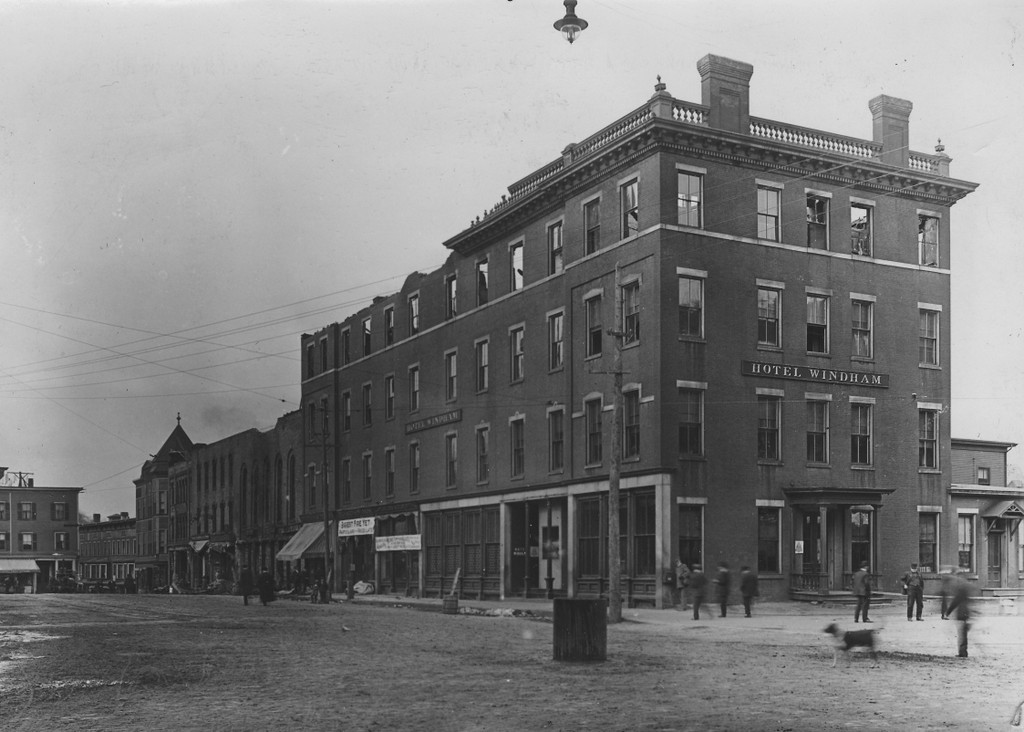 The hotel around 1913-1920. Image courtesy of the Rockingham Free Public Library. 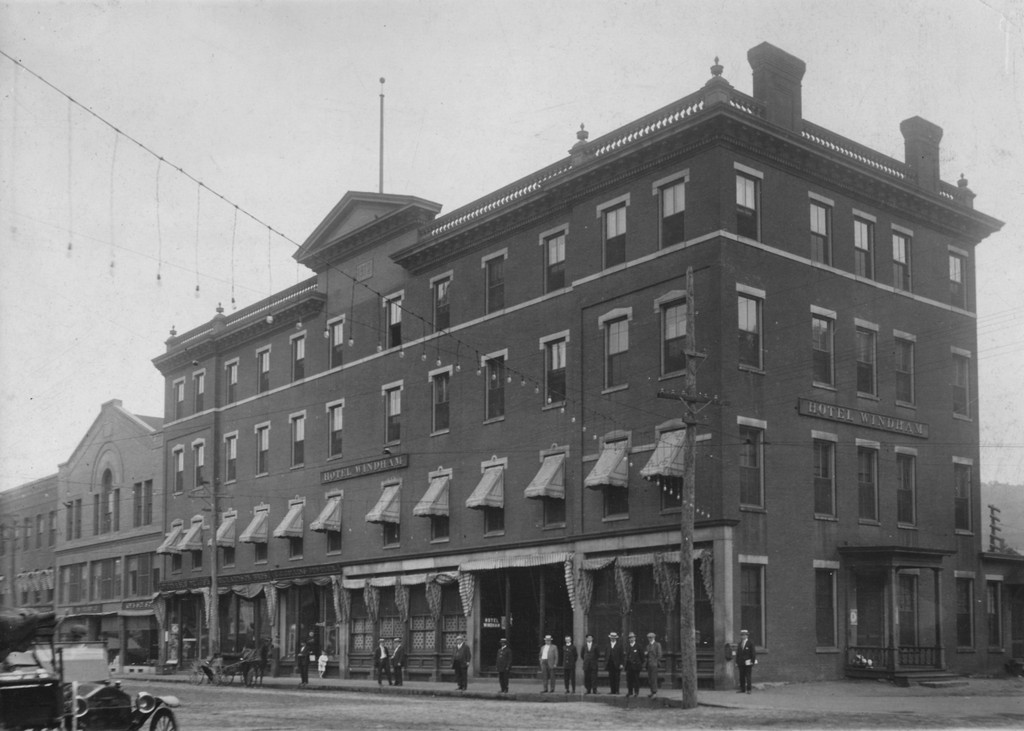 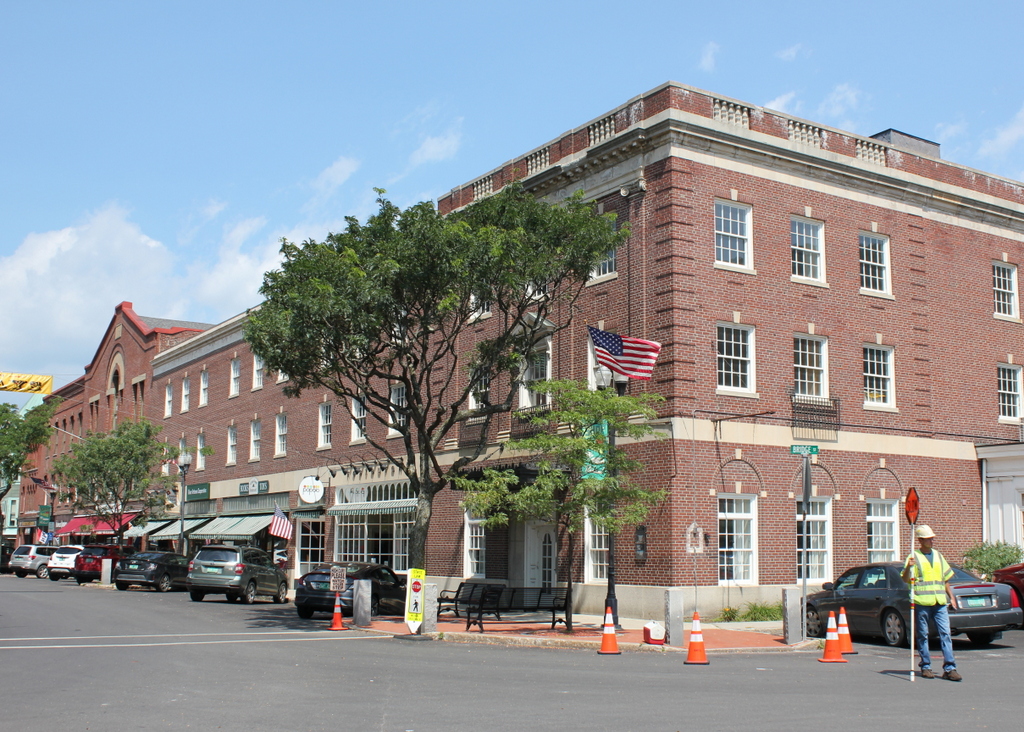 This spot here, at the southeast corner of the Square in Bellows Falls, has been the site of a hotel since the early 19th century. During this time, though, these hotels have been affected by a series of devastating fires. The first hotel was built here in 1816, and it was originally known as Webb’s Hotel, although it later became the Bellows Falls Stage House. This building burned in 1860, and in 1873 a new one, Towns Hotel, was built here on the site.

The Towns Hotel, named for owner Charles W. Towns, sustained heavy damage in a fire on April 12, 1899. Guests in the building had begun smelling smoke around 7:30 in the evening, but the fire smoldered for more than an hour before it was located under the fourth floor hallway. At first, it seemed as though it had been extinguished, but it had begun spreading into the empty space under the roof, and it ultimately set the upper floors ablaze. As shown in the first photo, the fourth floor was almost completely destroyed, and the third floor and parts of the second floor were completely gutted. The ground floor was largely untouched by the fire itself, but the stores here were flooded by all of the water that was poured into the building.

Following this fire, the hotel was rebuilt and expanded as the Hotel Windham, with a total of 75 guest rooms by the time the second photo was taken in the early 1900s. Then, it burned again in the early morning hours of March 26, 1912. The fire started in the adjacent Union Block, which is visible on the far left side of the second photo. It was evidently caused by a discarded cigarette, and it completely gutted the Union Block while also spreading to the Hotel Windham on the right and the Arms Block on the left.

According to early estimates, the total damage to the three buildings was about $150,000 to $200,000, and it displaced about 20 businesses and professional offices. There were 30 guests in the hotel at the time of the fire, but they were all evacuated with the help of the hotel employees, and there were no fatalities from any of the buildings. Part of the challenge for the responding firemen was the cold temperatures, which reached as low as ten degrees below zero, making it difficult to get water to the scene. By the time the fire was extinguished, the burned-out ruins were covered in ice.

The third photo was probably taken soon after the ice melted. No work had been done on the buildings yet, although several of the stores had already posted signs above their doors. One of the signs, above the Collins & Floyd jewelry store, informs customers of their temporary location, and another, above the Richardson Brothers shoe store, reads “Biggest Fire Yet. Particulars and Prices Later.”

All three of the damaged buildings were subsequently rebuilt. Because of the extent of its damage, the Union Block was completely reconstructed, becoming the three-story, gable-roofed building on the left side of the last two photos. The Arms Block to the left of it had comparatively less damage, and it was repaired along with the Hotel Windham. The fourth photo was probably taken soon after this work was completed, and it shows that the exterior of the repaired hotel was nearly identical to its appearance before the fire.

The building stood here for the next two decades, but on April 5, 1932 the hotel was again destroyed by a catastrophic fire. It started a little after midnight, apparently in an unoccupied room on the second floor, and it subsequently spread throughout the entire building, leaving little standing except for some of the brick exterior walls. All 44 guests were able to leave safely, though, most with their belongings, and the fire was successfully contained to just the hotel, preventing it from spreading to the neighboring buildings.

This time, the remains of the old 1873 building were completely demolished, and a new, somewhat smaller hotel was built on the site. This three-story brick, Colonial Revival-style hotel opened just over a year later, on May 1, 1933, and it is still standing here on this site. It remained the Hotel Windham for many years, although it later became the Andrews Inn by the 1970s.

Today, the Hotel Windham remains an important feature in the center of Bellows Falls. It is no longer used as a hotel, but it still features stores on the ground floor. The exterior remains well-preserved in its early 1930s appearance, and it recently underwent a restoration. The other buildings further to the left of the hotel are also still standing, including the Arms Block, which dates back to before the first photo was taken. Today, all of these buildings here are part of the Bellows Falls Downtown Historic District, which was added to the National Register of Historic Places in 1982.