The building at the northern end of the Square, between Rockingham and Canal Streets in Bellows Falls, around 1904-1914. Image courtesy of the Rockingham Free Public Library. 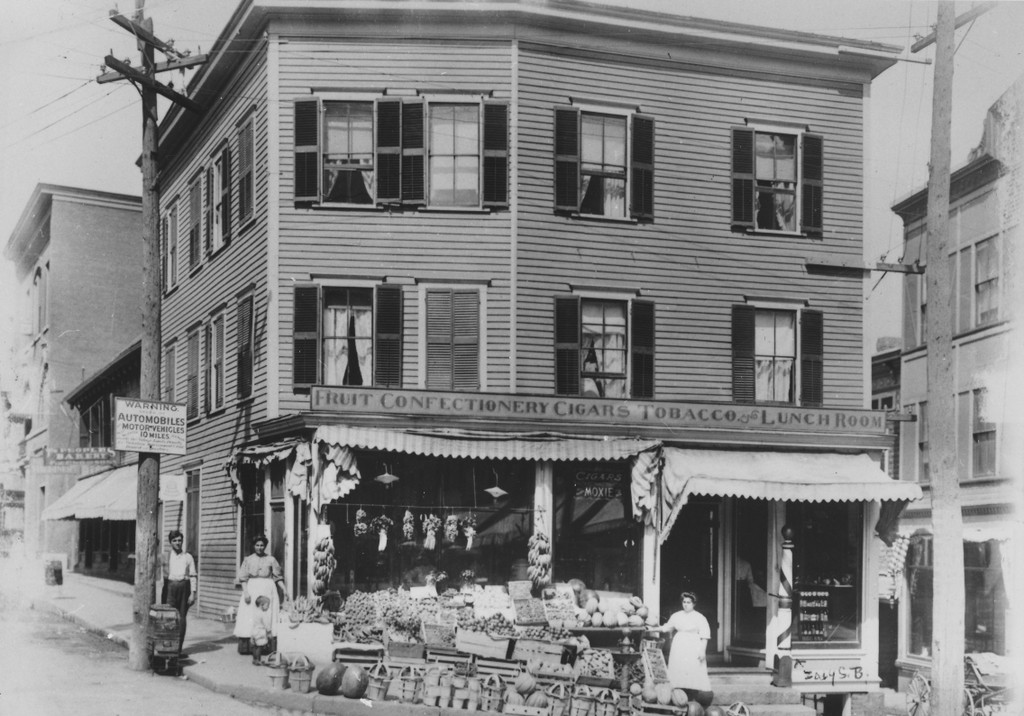 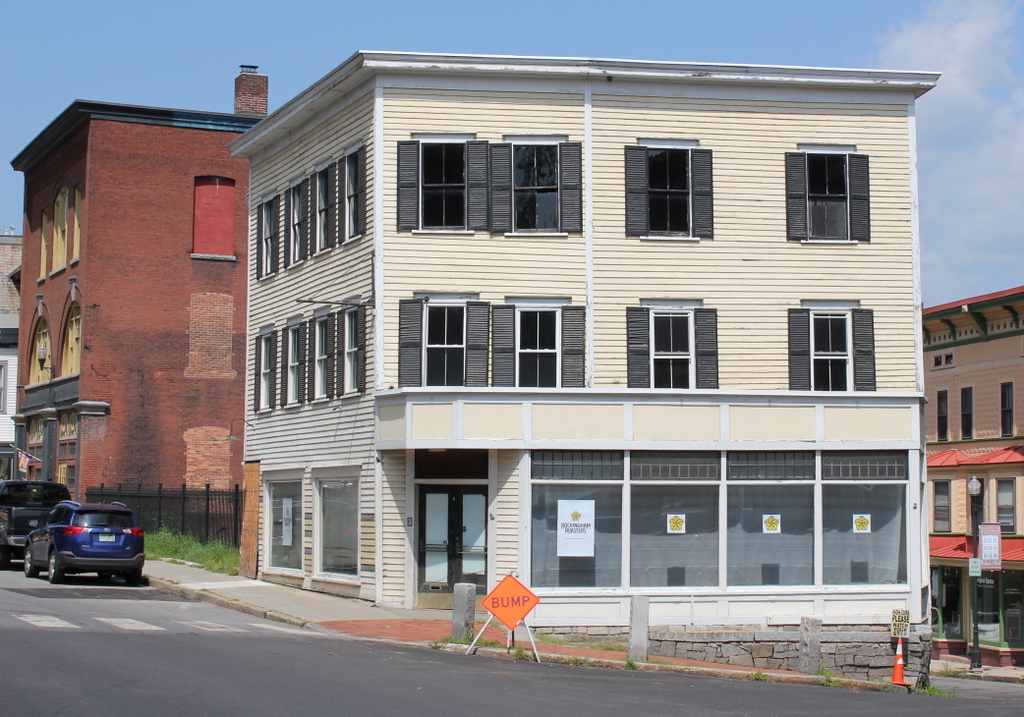 During the early 20th century, downtown Bellows Falls suffered a series of devastating fires that destroyed many of the 19th century buildings here at the Square. Throughout this time, though, this modest wood-frame commercial block has survived largely unscathed, with few significant changes since the first photo was taken more than a century ago.

The building’s origins date back to around 1820, although it was heavily reconstructed around 1890, including the addition of a third floor. By about the turn of the 20th century, the storefront was occupied by Baldasaro’s Fruit Market, as shown in the first photo. The market was run by Pasquale “Patsy” Baldasaro, an Italian immigrant who came to the United States as a teenager in the mid-1880s. He spent some time working as a foreman for the Boston & Maine Railroad, but he subsequently came to to Bellows Falls, where he opened a fruit market on Canal Street before moving his store to this location.

Baldasaro ran the business until the early 1910s, when he sold it to two of his clerks, and he died in 1921 at the age of 48. However, he was still remembered many years later, and his store was mentioned in the 1958 book History of the Town of Rockingham Vermont, which provides the following reminiscence:

At the north end of the Square, now occupied by the Army & Navy Store which opened there in 1946, was once the fruit store where Patsy Baldasaro hung out great bunches of bananas, set out baskets of oranges and apples, watermelons and coconuts and whose peanut roasting maching [sic] whistled cheerfully on the edge of the sidewalk. Patsy was a well known figure in town for many years and every housewife rallied to his long-drawn call of “ba-na-nas, o-ran-ges,” as he rode his cart through the streets, seated like a Gargantua, his immense body making it a hazardous adventure to get up and down from his high perch. Youngsters saved their pennies to buy an orange as big as a croquet ball for a nickle and the last thing on Saturday afternoons, thrifty mothers could buy eighteen dead ripe bananas for a quarter. The pleasant ghost of Patsy still rides the summer streets along with the sprinkling cart, the ice wagon and the hot smell of tar sidewalks on a July day. His broad face always smiled but his whip was ready to reach out and flick the bare legs of any youngster who sneaked up behind to snitch a loose banana or coconut.

As mentioned in that excerpt, the building was used as an army and navy store during the mid 20th century, and since then it has seen a variety of other commercial tenants, including, in recent years, a cycling studio and an antique shop. Then, in 2017 it was purchased by Rockingham Roasters, and over the past few years the building has undergone a major restoration, including repairing the foundation and gutting the interior. The first photo was taken during the summer of 2018 in the midst of this work, and the project is still ongoing, although the coffee shop is projected to open at some point this year.

Overall, the historic building has remained well-preserved on the exterior, and the only significant difference since the early 20th century is the altered storefront on the ground floor. Several of the surrounding buildings are also still standing from the first photo, including the old fire station on the far left, which was built in 1904. Today, these buildings, along with the rest of the historic properties in the area, are now part of the Bellows Falls Downtown Historic District, which was added to the National Register of Historic Places in 1982.