The house at 23 Summer Street in Salem, around 1891. Image courtesy of the Phillips Library at the Peabody Essex Museum, Frank Cousins Collection of Glass Plate Negatives. 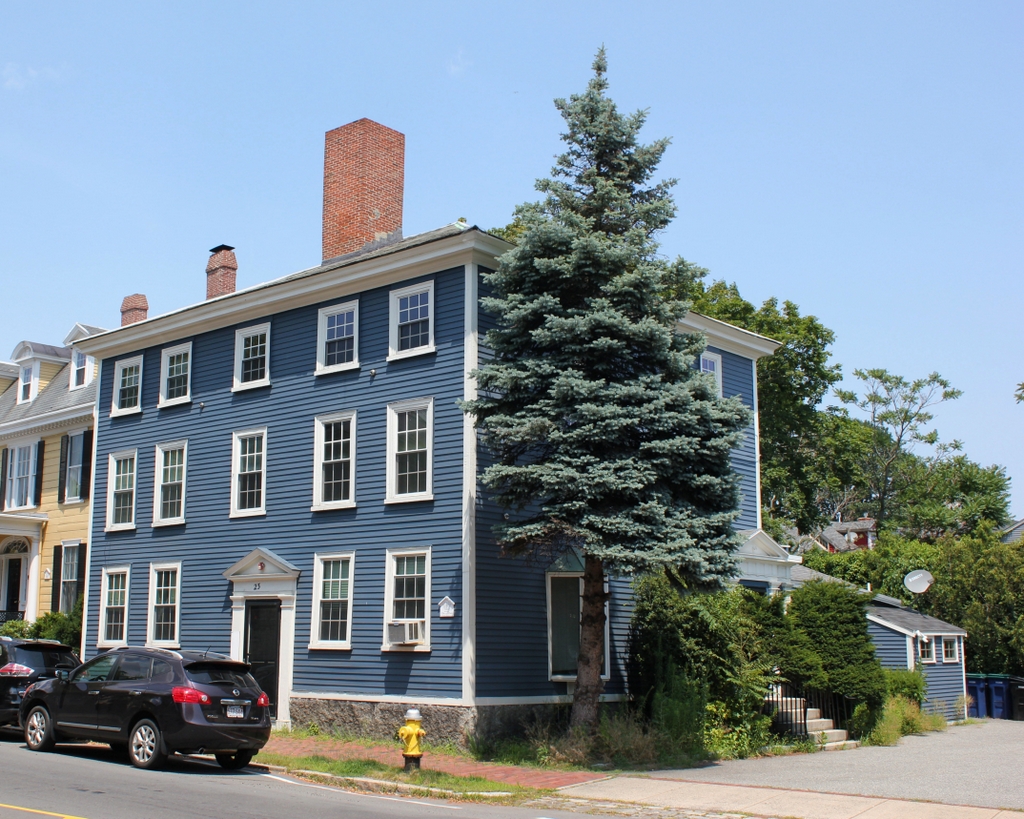 This house was built sometime between 1756 and 1760 by Benjamin Daland. He does not appear to have lived here for very long, though, because in 1760 he sold the property to Samuel Calley, who in turn sold it in 1762 to Captain George Dodge, a mariner from nearby Beverly. He was 35 years old at the time, and he and his wife Lydia and their seven children. They subsequently had two more children over the next new years, and Dodge owned the house until 1782. By this point Dodge was referred to in historical records as a merchant rather than a mariner, suggesting that he took the career path of many retired sea captains in Salem and went into business for himself as a merchant. Like many other Salem merchants, he was also involved in privateering during the American Revolution, owning several privateer ships that preyed on British shipping.

The next owner of the house was William Orne, who purchased it from Dodge in 1782 for 1,100 pounds. The historical records indicate that he was also a ship captain and later a merchant, but there appears to have been several William Ornes living in Salem during this period, so it seems difficult to determine which one owned this house. However, it may have been the same William Orne who was captured by the British during the War of 1812 and was being held prisoner aboard the HMS Guerriere during its famous battle with the USS Constitution.

Another area of uncertainty in tracing the history of this house is that, while Orne owned the house, it does not necessarily mean that he—or the other early owners of the house—personally lived here. In any case, though, Orne owned the house until 1807, when he sold it for $4,600 to Thorndike Deland, who then sold it for $4,500 in 1812 to his sister Eliza Osborn. Eliza was a wealthy widow whose husband, Captain George Osborn, had been swept overboard at sea in 1800. A year after acquiring this house she remarried to Abner Kneeland, a Unitarian theologian who would become a notable and controversial religious figure over the next few decades.

As with the previous owners, it does not seem clear how long Eliza actually lived here, because she and Abner only lived in Salem for a couple years after their marriage. However, the house would remain in her family for many years. It was owned jointly by George Osborn and Eliza Archer, her children from her first marriage, until 1863, when George became the sole owner. Neither sibling appears to have lived in the house, though, because city directories of the period list several other residents here, including grocer John Chamberlain, who was living in the house as early as 1846.

After George Osborn’s death in 1882, his daughter Eliza D. Shepard inherited the property. The first photo was taken about a decade later by Frank Cousins, a prominent photographer who documented historic buildings in Salem and other places in the northeast around the turn of the 20th century. Cousin’s caption identifies it as the “Doctor T.O. Shepard house,” indicating that Eliza Shepard’s son Thomas was living here at the time.

Thomas and his sister Sarah eventually acquired the house, and unlike some of the previous generations they definitely lived here on Summer Street. The 1910 census shows them living here together, unmarried and in their 40s. Thomas, who was an 1892 graduate of Harvard Medical School, was an oculist, and he had his practice here in the house. The Shepards also employed two live-in servants at the time, one of whom was listed as a cook in the census.

Thomas continued to live here until his death in 1935, and Sarah remained here for at least a few more years, but by the 1940 census she was living elsewhere. Then, in 1941 she sold this house on Summer Street to Marie Anne Cadorette. This marked the end of 135 years of ownership by the same family, which had spanned four different generations of Osborns and Shepards.

Today, well over a century after the first photo was taken, the house is still standing. It has seen some changes, including the loss of the shutters and the front entryway, and the outbuilding in the back of the lot is gone, but overall it survives as one of the many well-preserved historic 18th century homes in Salem. The neighboring John P. Peabody House, built in 1868 on the far left side of the scene, is also still standing, although the house on the far right side of the first photo has since been demolished.