Looking north on North Pearl Street from the corner of State Street in Albany, around 1904. Image courtesy of the Library of Congress, Detroit Publishing Company Collection. 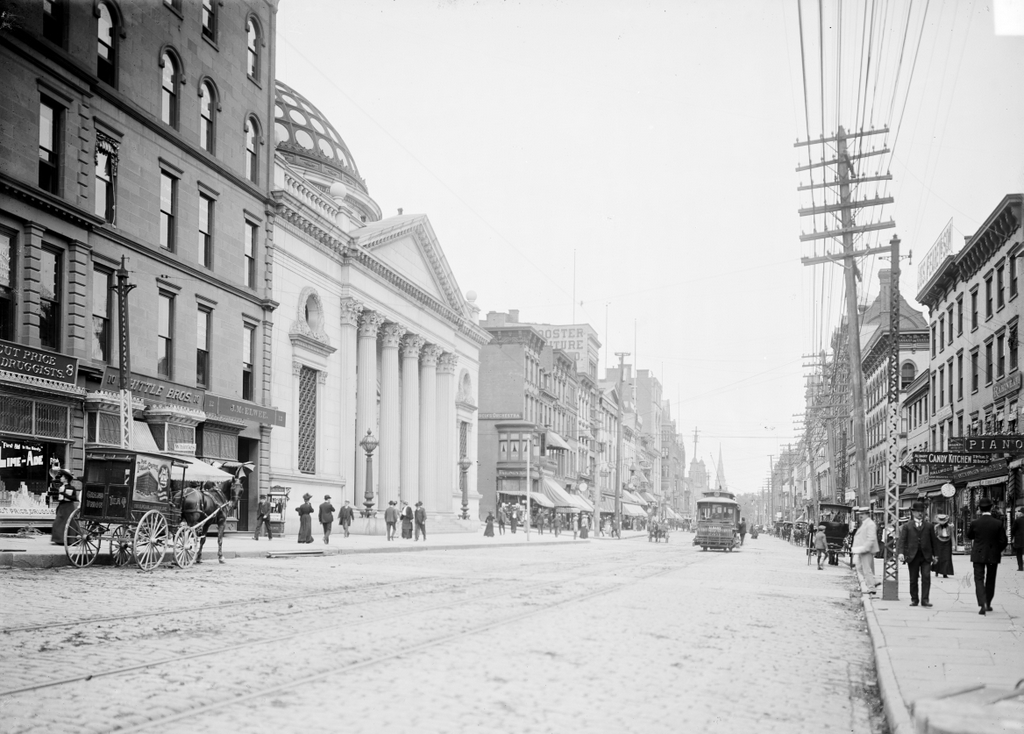 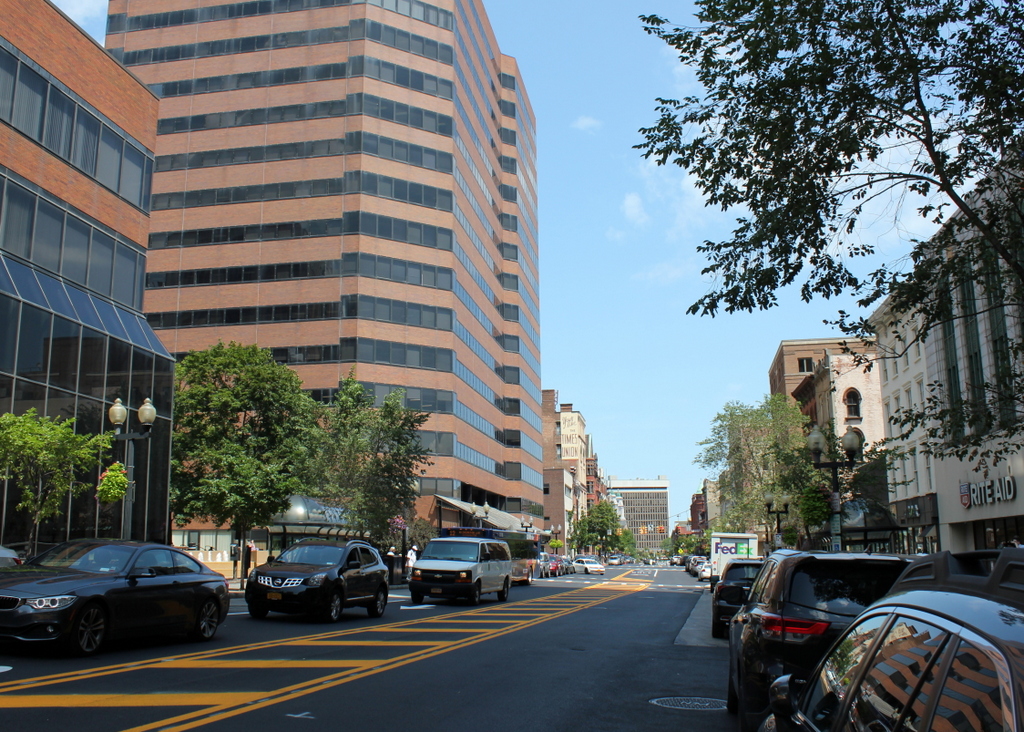 Pearl Street is one of the main north-south streets through downtown Albany, and these photos show the view looking north from the corner of State Street. When the first photo was taken, much of the streetscape consisted of four-story brick Italianate-style commercial buildings from the second half of the 19th century. However, the one major exception was the Albany Savings Bank, which stands on the left side of the scene. The building, with its Corinthian columns and large dome, was designed by noted architect Henry Ives Cobb, and it was constructed in 1898.

Just to the left of the bank was another notable downtown building, the Tweddle Building. It stood at the corner of State and North Pearl Streets, and it is more visible in a photo from an earlier post, which shows it from State Street. Here on the North Pearl Street side of the building, it had several different retail tenants on the ground floor. Starting on the far left side of the first photo, it housed “Cut Price Druggists,” which had a window advertisement for “Lime-Ade,” declaring it to be “First Aid to the thirsty.” Just to the right of the drugstore is the Whittle Brothers florist shop, and further to the right is the umbrella shop of J. McElwee, which had an outdoor display advertising for “Covering and Repairing” of umbrellas.

Elsewhere in the first photo, a number of signs adorn the sides of the buildings and extend outward across the sidewalk, hoping to catch the attention of the pedestrians. On the far right side near the foreground, these included the Albany & Troy Candy Kitchen, the Hallwood Cash Register Company, Harry Ellis’s men’s furnishings shop, the W. F. Antemann & Son jewelry shop, and the Joseph Feary & Son boot and shoe store. Antemann’s shop was marked by a large pocket watch sign, but many of his competitors apparently had the same idea, since there are at least three similar pocket watch signs visible across the street on the left side. Also on the left side, just beyond the bank, is Failing’s Apothecary, with a name that inspires even less confidence than the competing “Cut Price Druggists” a block away.

On the street, the traffic in the photo consists primarily of horse-drawn wagons. The most visible of these is the well-decorated wagon of the Grand Union Tea Company, on the far left side of the photo. The driver is perhaps delivering tea to the Cut Price drugstore, and the horse is staring directly at the camera. There are no automobiles visible in the photo, although by this point there were already thousands registered in the state of New York, and within just a few years they would largely displace the horse-drawn vehicles. In the meantime, though, the only sign of new transportation methods in the first photo is the electric trolley in the distance.

Today, around 115 years after the first photo was taken, very little remains of the early 20th century scene, especially here in the foreground. Cars now dominate the street, with not a draft animal in sight, and even the trolleys are long gone, having been replaced by buses, such as the one in the lower center of the 2019 photo. Most of the buildings here are also gone. Among the first to be demolished was the Tweddle Building on the far left, which was replaced by the 17-story Ten Eyck Hotel in the mid-1910s. This hotel was then demolished in the early 1970s, around the same time as the Albany Savings Bank building. The spot where the hotel once stood is now a modern office building, and the site of the bank is the Ten Eyck Plaza.

Despite all of the changes, though, there are a few surviving buildings near the foreground on the right side of the scene. Closest to the camera is the four-story building at 23-25 North Pearl Street, which was occupied by Feary’s boot and shoe store in the first photo. It was built in 1854, and it is still standing today, with few significant exterior changes aside from the storefronts. A little further north, just beyond Maiden Lane, are two other historic buildings, at 29-31 North Pearl Street. These were built in 1869 and feature distinctive cast iron lintels over the windows. The main facade of 29 North Pearl was altered at some point in the 20th century with a Tudor-style appearance, but otherwise the buildings are still recognizable from the first photo.

Overall, the best-preserved section of this scene is far in the distance. The two blocks between Pine and Columbia Streets are still lined on both sides with predominantly 19th and early 20th century buildings. These include the former YMCA building, site of the first basketball game played away from the sport’s Springfield birthplace, and the Kenmore Hotel, an ornate High Victorian Gothic building that opened in 1878. These buildings, along with the other historic buildings in this scene, are now part of the Downtown Albany Historic District, which was added to the National Register of Historic Places in 1980.