The view looking northeast at Meriam’s Corner in Concord, with Old Bedford Road to the left and Lexington Road on the right, around 1900. Image courtesy of the Library of Congress, Detroit Publishing Company Collection. 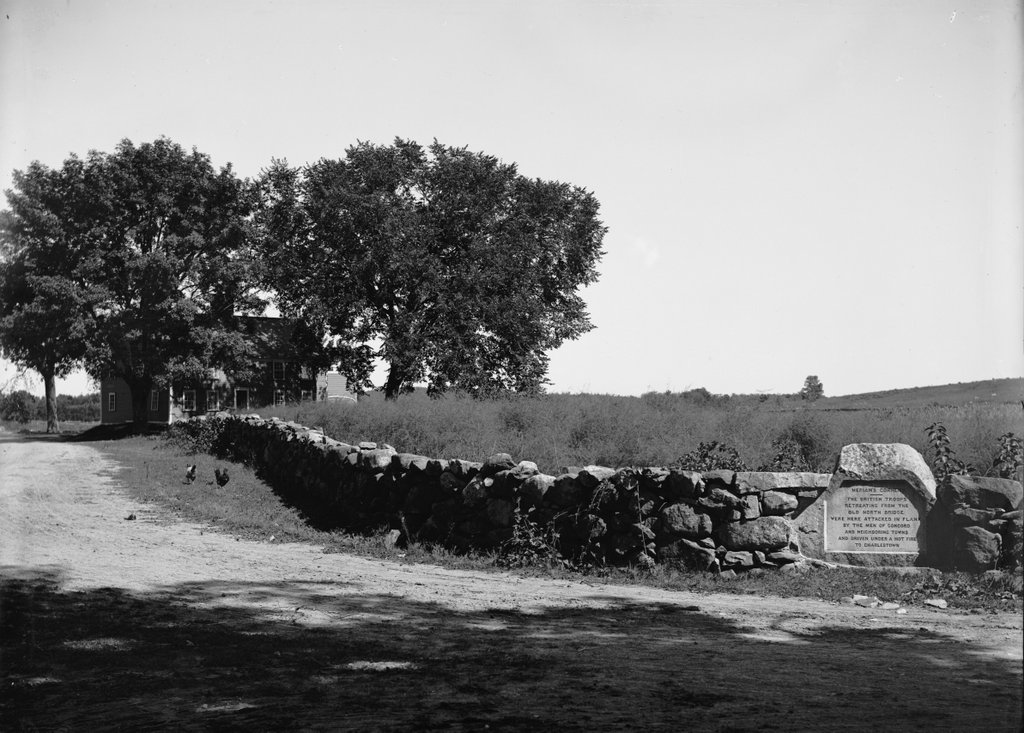 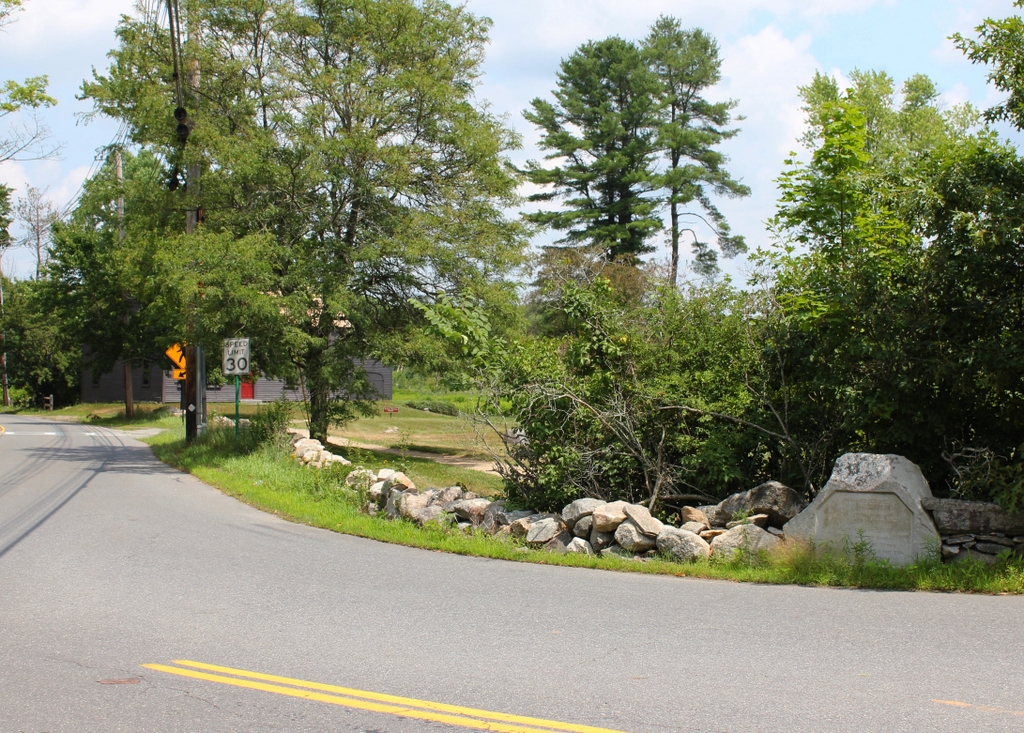 The battles of Lexington and Concord on April 19, 1775 marked the start of the American Revolution, when colonial militiamen resisted British attempts to seize military supplies in Concord. However, the fighting did not consist of a single battle, but rather a series of skirmishes spread out across several towns between Boston and Concord. It began at dawn in Lexington, when about 80 of the town’s militiamen gathered on the town common to confront the advancing British. A tense standoff led to both sides exchanging gunfire, killing eight colonists before the British continued their march to Concord. There, they seized some of the colonial supplies, but their advance was halted at Old North Bridge, where militiamen fired the famous “shot heard ’round the world” and forced three companies of redcoats to retreat.

Up until this point, the day was relatively bloodless for the British, who had one soldier wounded at Lexington, three killed at Old North Bridge, and nine wounded there. They had partially succeeded in their objectives, having destroyed some of the colonial cannons and supplies, but they now found themselves deep in hostile territory, with an ever-increasing number of militiamen streaming in from the surrounding towns. Facing a 17-mile march back to the safety of Boston, the redcoats ate lunch in Concord before leaving the town around noon.

Lt. Colonel Francis Smith, the commander of the British soldiers here, ordered a flank guard to protect the column of redcoats as they marched out of Concord. However, just beyond this intersection the road crosses a small stream, requiring the flank guard to return to the road in order to cross the bridge. At the same time, militiamen from Reading, Chelmsford, and Billerica arrived on scene. Observing that the British were vulnerable to attack without a flank guard, Captain John Brooks of the Reading minutemen ordered his soldiers to open fire, beginning what would soon turn into a long and bloody struggle for the British as they made their way back to Boston.

This intersection is known as Meriam’s Corner because it was the longtime home of the Meriam family, who had lived here since the mid-1600s. By 1775 there were three different houses here that belonged to members of the family, including the one on the left side of these photos. Built around 1705 by Joseph Meriam, it was subsequently owned by his son Nathan, who was living here with his wife Abigail and their children in 1775. Nathan was 54 years old at the time, and he was serving as one of the three town selectmen in Concord. He does not appear to have participated in the fighting here, but accounts of the battle suggest that his house and outbuildings were probably among the structures that the militiamen used for cover when they opened fire on the British column.

Contemporary descriptions of the day’s fighting lack specific details about how the fighting unfolded here at Meriam’s Corner, but several later accounts provide more information. Among these is a letter, written in 1825 by Reverend Edmund Foster, who had been one of the Reading minutemen who fought here a half century earlier. In this letter, he wrote the following, which is quoted from the National Park Service’s Historic Structure Report on the Meriam house:

We rendezvoused near the middle of the town of Bedford; left horses, and marched forward in pursuit of the enemy. A little before we came to Merriam’s hill, we discovered the enemy’s flank guard, of about 80 or 100 men, who, on their retreat from Concord, kept that height of land, the main body [being] in the road. The British troops and the Americans, at that time, were equally distant from Merriam’s corner. About twenty rods short of that place, the Americans made a halt. The British marched down the hill with very slow, but steady step, without music, or a word being spoken that could be heard. Silence reigned on both sides. As soon as the British had gained the main road, and passed a small bridge near that corner, they faced about suddenly, and fired a volley of musketry upon us. They overshot; and no one, to my knowledge, was injured by the fire. The fire was immediately returned by the Americans, and two British soldiers fell dead a little distance from each other, in the road near the brook. The battle now began, and was carried on with little or no military discipline and order, on the part of the Americans, during the remainder of that day. Each one sought his own place and opportunity to attack and annoy the enemy from behind trees, rocks, fences and buildings, as seemed most convenient.

As noted in the letter, the brief exchange of fire here at Meriam’s Corner was only the beginning of what would become an afternoon of guerilla warfare and ambushes on the part of the colonial militiamen. They inflicted particularly heavy casualties less than a mile to the east of here, at a spot now known as the Bloody Angle, where 30 British soldiers were killed or wounded. By the time the column reached Lexington the retreat had turned into a rout, and only the timely arrival of reinforcements from Boston saved the British from total disaster.

The British retreat marked the beginning of the Siege of Boston, which lasted until they evacuated the town 11 months later in March 1776. In the meantime, no further fighting occurred here in Concord for the rest of the war, and life in the town largely returned to normal. Nathan Meriam continued to live here in this house until his death in 1782. His son Ephraim subsequently acquired the property, and it would remain in his family until the death of his son Rufus in 1870. Rufus was a bachelor with no children, and the family sold the house a year later, ending two centuries of Meriam family ownership of this lot.

In 1871, the house was purchased by Thomas and Rose Burke, two Irish immigrants who lived here with their four children. He was a farmer, and he and Rose were still living here when the first photo was taken around 1900. According to that year’s census, all four of their children, who were now adults, were also still here, along with a hired hand who worked on the farm and lived with the family.

The first photo shows the scene looking northeast from the intersection. From here, the road on the left is Old Bedford Road, the route that the Reading minutemen took to get here. Out of view on the right is Lexington Road, which the British took on their way to and from Boston on the day of the battle. In the foreground on the right side of the scene is an inscribed boulder, which was installed in 1885 as part of the commemoration of the 250th anniversary of Concord’s founding. It reads: “Meriam’s Corner. The British troops retreating from the Old North Bridge were here attacked in flank by the men of Concord and neighboring towns and driven under a hot fire to Charlestown.”

Today, around 120 years after the first photo was taken, this scene has not changed substantially, except for the paved roads and increase in vegetation. The commemorative boulder is still there, as is the Meriam House in the distance, although it is now mostly hidden by trees from this angle. This site, along with much of the land surrounding the historic Battle Road, is now preserved and administered by the National Park Service as part of the Minute Man National Historical Park, which was established in 1959.