The Bacon Academy building at 84 Main Street in Colchester, around 1896. Image from Connecticut Quarterly. 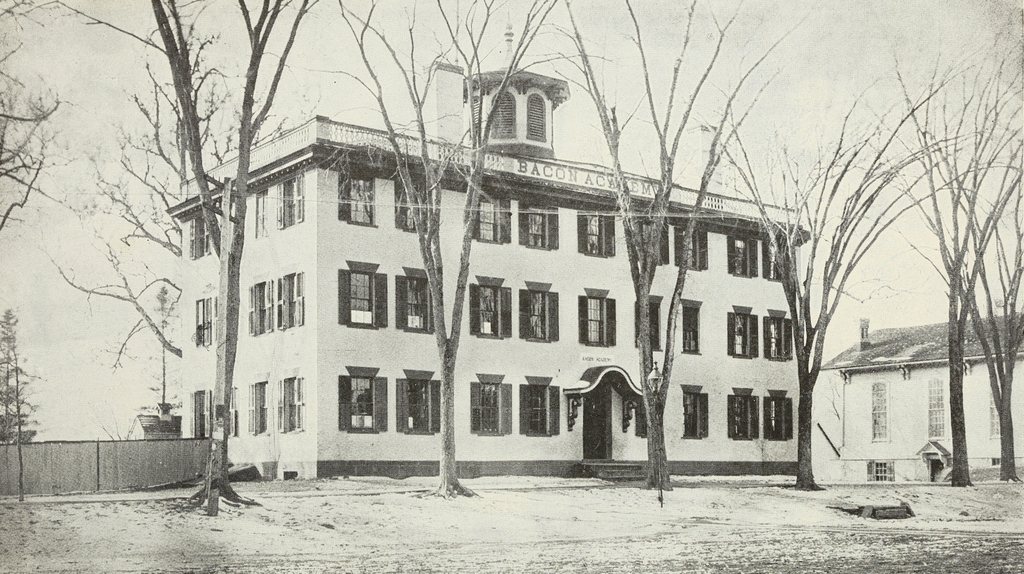 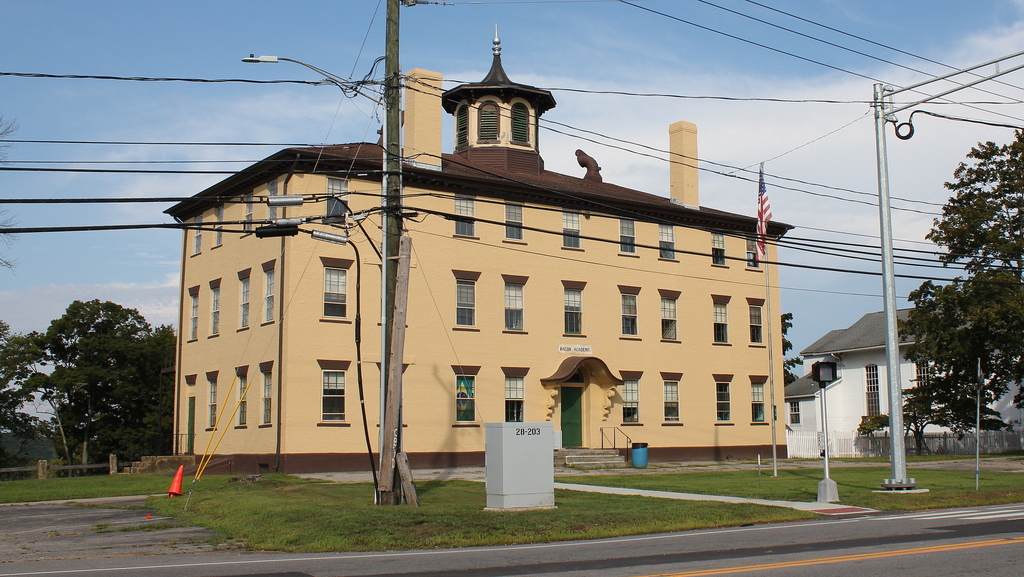 Bacon Academy is one of the oldest public high schools in the United States, and the second oldest in Connecticut. It was established in 1803 following the death of Pierpont Bacon, a Colchester resident who bequeathed $35,000 to maintain a school for the town’s residents. At the time, a high school education was rare in the United States, and few towns had a high school, even here in the relatively well-educated northeast. For Bacon Academy, the main purpose was to prepare boys for college, so the school offered what was, at the time, regarded as a well-rounded education. An 1803 newspaper advertisement declared that students would “be accommodated with suitable instruction in Reading, Writing, Arithmetic, the learned Languages and Sciences.” Tuition in 1803 was $2.00 per quarter in the summer, and $2.50 per quarter in the winter.

The school opened on November 1, 1803, here in this brick, three-story Federal-style building. It is situated right in the center of Colchester, on Main Street directly opposite Norwich Avenue. Behind the school, visible in the distance on the left side of the scene, is the town’s old burying ground, which dates back to 1713. The opening of the school was widely reported in newspapers across the region, and the New York Morning Chronicle provided the following description of the building and its location:

A large and elegant brick building is erected for the accommodation of the scholars; being 75 feet in length, 34 feet in breadth, and three stories high. It is divided into a large hall, and convenient apartments for the different branches. . . . Colchester is a very healthy and pleasant town situated on the turnpike road leading from Hartford to New-London, being nearly equi-distant from each. A more eligible situation for an institution of this kind, could not have been chosen.

The first principal of the school was 31-year-old John Adams, a Connecticut native and Yale graduate who had previously taught at Plainfield Academy in New Jersey. He went on to become a prominent educator, serving here in Colchester until 1810, followed by 23 years as principal of Phillips Academy Andover. Later in life he moved west, serving from 1836 to 1843 as principal of Jacksonville Female Seminary, a school that would eventually be incorporated into Illinois College in the early 20th century.

During its first year, Bacon Academy enrolled 206 students. The majority of these were from Colchester, but 63 of them were from out of town. In its early years, the school even attracted students from out of state. Perhaps most notably, this included 11-year-old Stephen F. Austin of Missouri, whose father Moses Austin enrolled him in the school starting in the fall of 1804. Stephen Austin attended the school for the next three years, and he would eventually go on to become one of the founders of Texas and the namesake of its capital city.

Aside from Austin, Bacon Academy saw a number of its other students go on to achieve prominence in the 19th century. These included at least five future governors: William Larrabee of Iowa, Edwin D. Morgan of New York, Lyman Trumbull of Illinois, and William A. Buckingham and Morgan Bulkeley of Connecticut. With the exception of Larrabee, all of these men also served as U.S. senators, and Trumbull had a particularly distinguished career in the Senate, serving from 1855 to 1873. During this time, he co-authored the Thirteenth Amendment, which outlawed slavery. Other distinguished Bacon Academy students included Eliphalet A. Bulkeley, who became the first president of Aetna Insurance Company, and Morrison Waite, who served as chief justice of the United States from 1874 to 1888.

By the mid-1830s, the school had grown to 425 students, including 137 who were from out of town and 32 from out of state. For the first few decades, the student body consisted of white males, with a separate school here in Colchester to educate African American children. However, at least one African American, the prominent educator Prince Saunders, was associated with Bacon Academy only a few years after it opened. He ran the African American students, and he is said to have taken courses at Bacon Academy, although it does not seem clear as to whether he was formally enrolled at the school, or was taught outside of school by some of its teachers.

In any case, by the 1840s Bacon Academy was racially integrated, and it had begun to enroll female students. This period in the mid-19th century was a high point for the school, which had aspirations of becoming a top-tier college preparatory school similar to Phillips Academy. However, the school ultimately saw a decline in enrollment, in part because of this deviation from its original mission. Unable to compete with the more established private schools, by the late 19th century Bacon Academy had settled into the role of the public high school for residents of Colchester.

The first photo was taken around the mid-1890s, showing the main academy building in the foreground. On the far right side is Day Hall, an Italianate-style building that was completed in 1858 as a church hall for the adjacent First Congregational Church. By this point, the exterior of the academy had seen a few changes from its original appearance, including the door hood above the main entrance and the octagonal cupola atop the building. The photo shows shutters on the windows and a balustrade along the roof, although these may not have been original either; an 1836 engraving of the building does not show either of these features.

This building remained in use by Bacon Academy until 1962, when the school relocated to a new facility. The school subsequently moved again in 1993, to its current site a few miles to the west of here on Norwich Avenue, where Bacon Academy remains the town’s public high school nearly 220 years after it was first established. In the meantime, the old building here on Main Street is still standing, as is the neighboring Day Hall, which was acquired by the school in 1929. The exteriors of both buildings have remained well-preserved over the years, and the only noticeable difference to the academy building in this scene is the lack of shutters or balustrade. Because of its architectural and historic significance, the building was added to the National Register of Historic Places in 1982. In addition, both it and Day Hall are contributing properties in the Colchester Village Historic District, which was added to the National Register in 1994.