The old meeting house for the First Congregational Church in Wilbraham, around the 1860s or 1870s. Image courtesy of the Wilbraham Public Library. 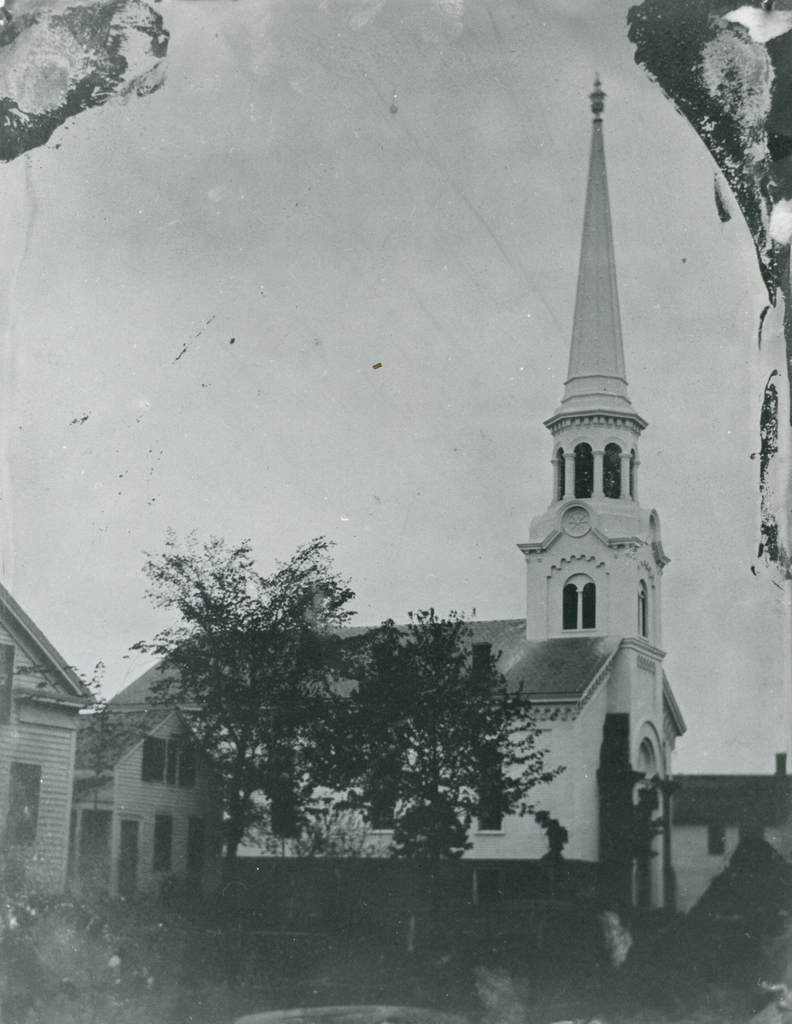 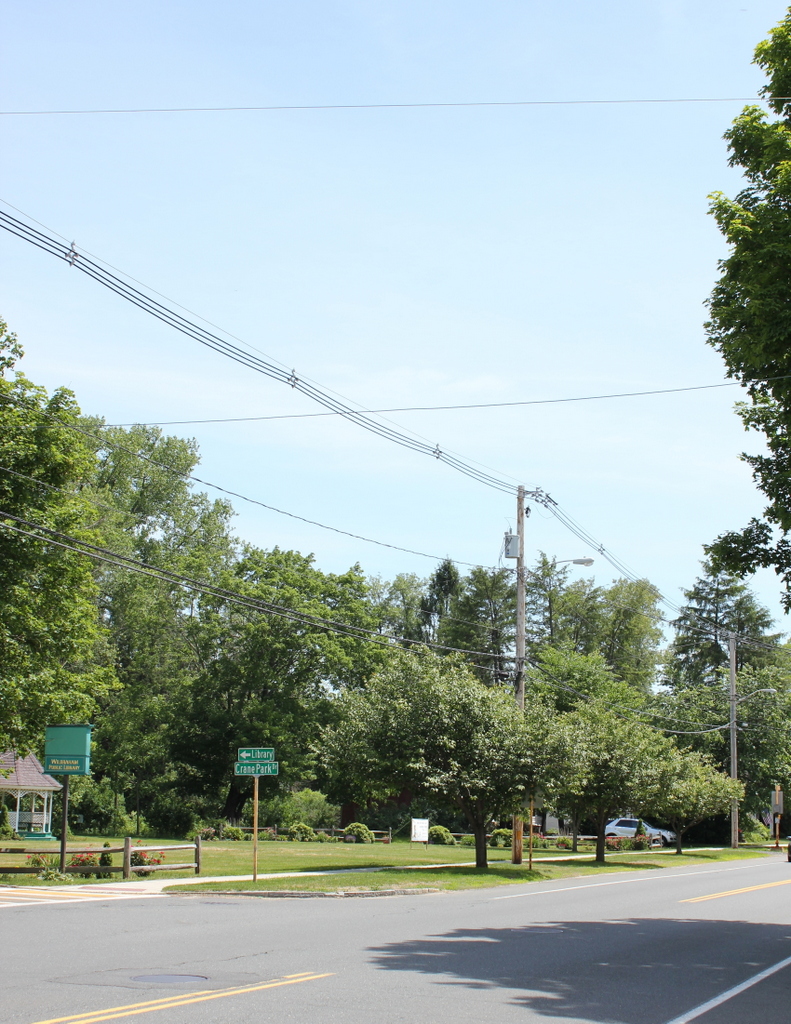 There aren’t too many photos of the church in the first scene, in part because of the building’s short lifespan.  It was built in 1857 to replace Wilbraham’s original First Congregational Church, which had been built in 1748 on Wigwam Hill, near the corner of present-day Tinkham Road and Bolles Road.  Given its rather inconvenient location, though, the building was brought down the hill and into the center of town in 1794.  It stood here until 1857, when it was moved again and converted into stables near the new church.  The new building would’ve been the home church for many of of Wilbraham’s 228 men who served in the Civil War, and the first photo was probably taken during or soon after the war.  However, both the old and the new churches were destroyed in a fire in 1877, and a new building was built on the site; this also burned down, after being struck by lightning in 1911.  Today, Gazebo Park is located on the spot where a total of four generations of Wilbraham churches once stood, from 1794 to 1958.

Looking north on Main Street in Wilbraham, with the First Congregational Church in the center, taken around 1900-1911. Image courtesy of the Wilbraham Public Library. 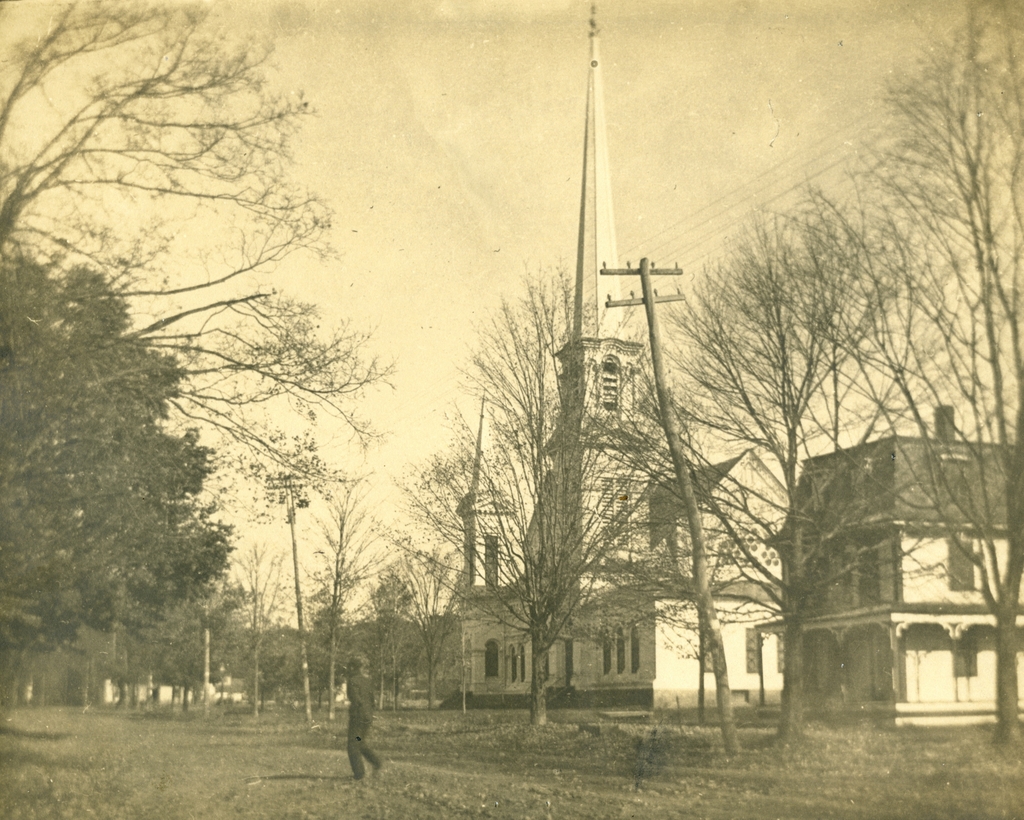 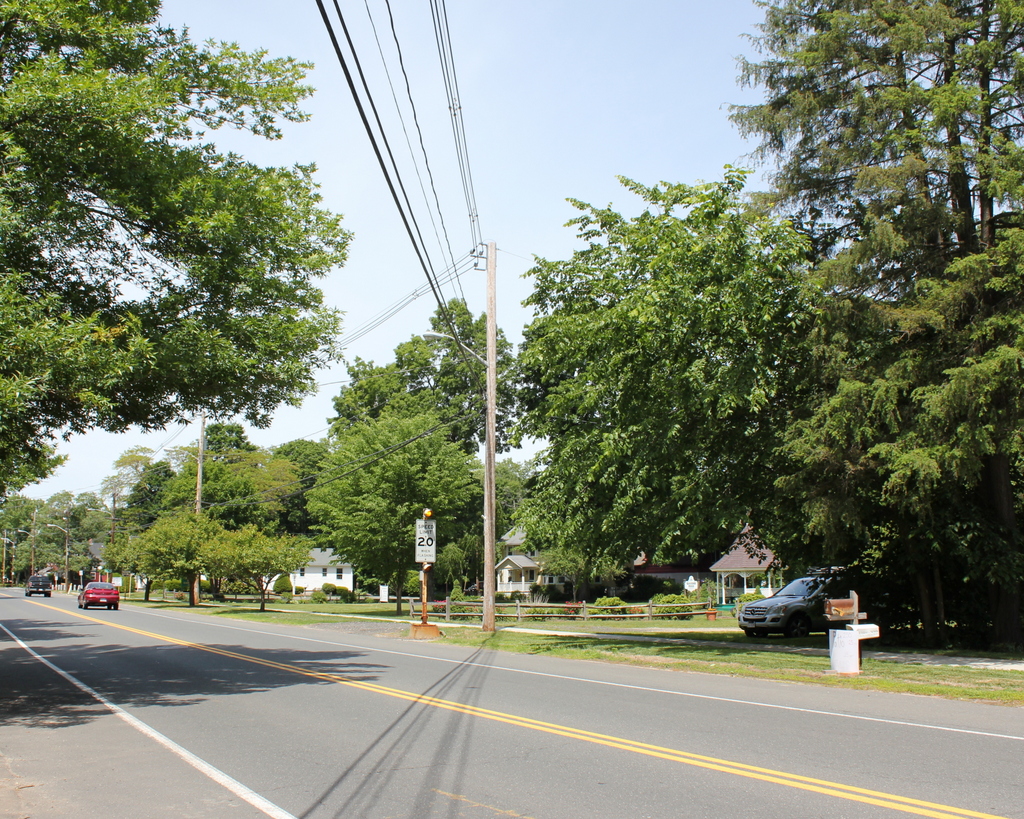 Taken from a similar angle as the ones in this post, these photos show some of the changes on Main Street in Wilbraham over the past century.  I don’t have an exact date for this photo, but it was taken sometime between 1896, when the Allis House just beyond the church burned down, and 1911, when the church itself burned.  Today, the site of the church is now Gazebo Park, and the house in the right foreground is also gone, although many similar historic houses still exist on Main Street.

The First Congregational Church on Main Street in Wilbraham, probably around 1900. Image courtesy of the Wilbraham Public Library. 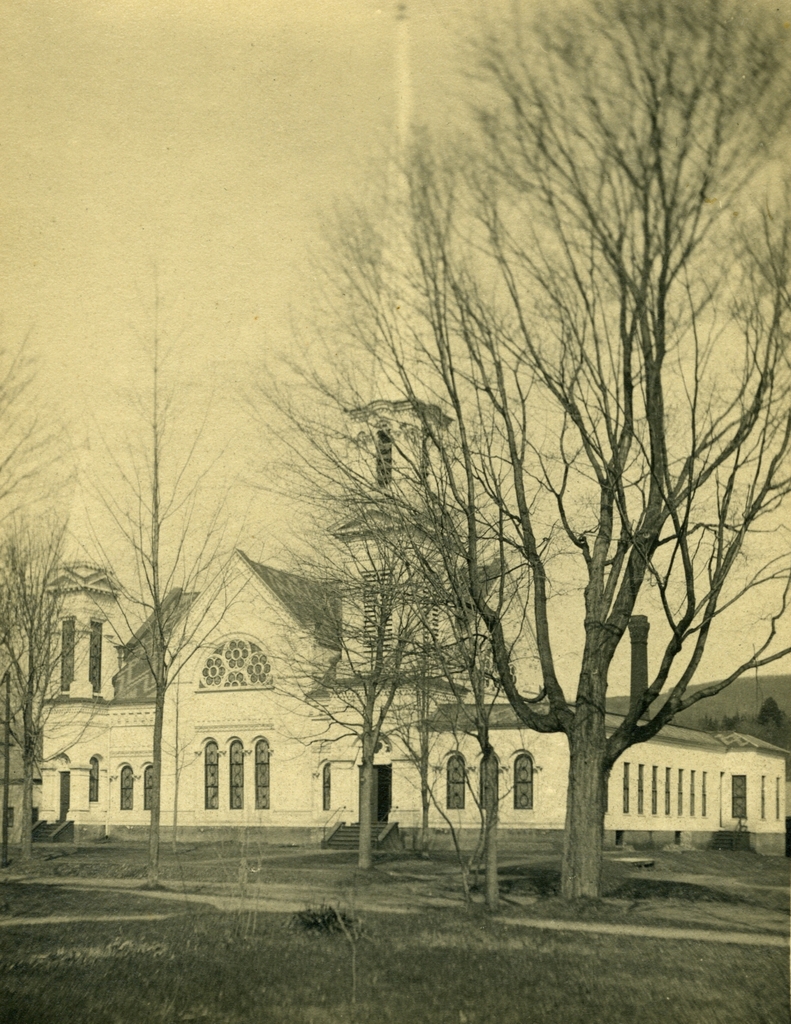 The church on fire after being struck by lightning on July 5, 1911. Image courtesy of the Wilbraham Public Library. 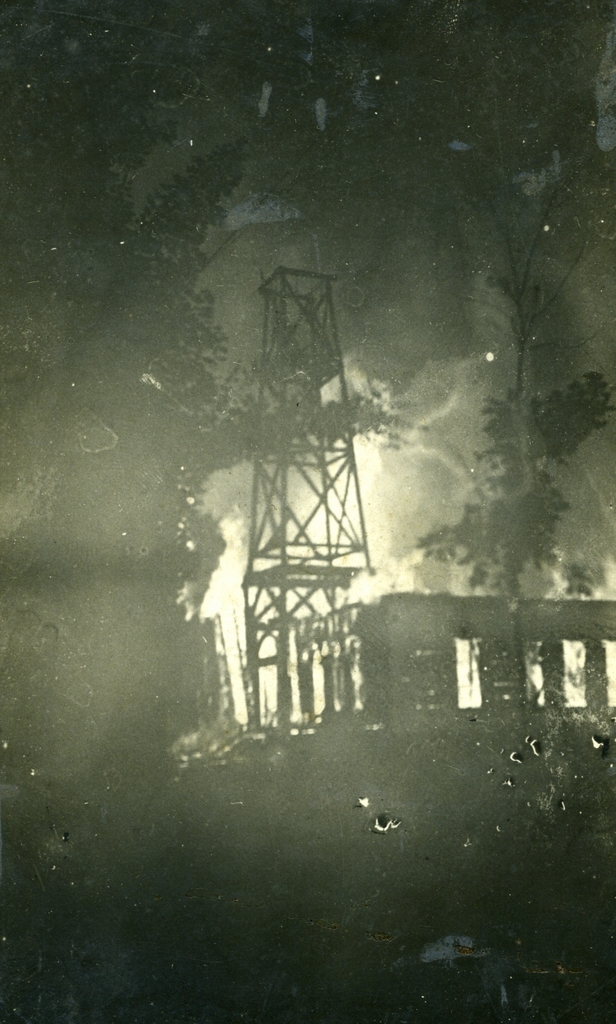 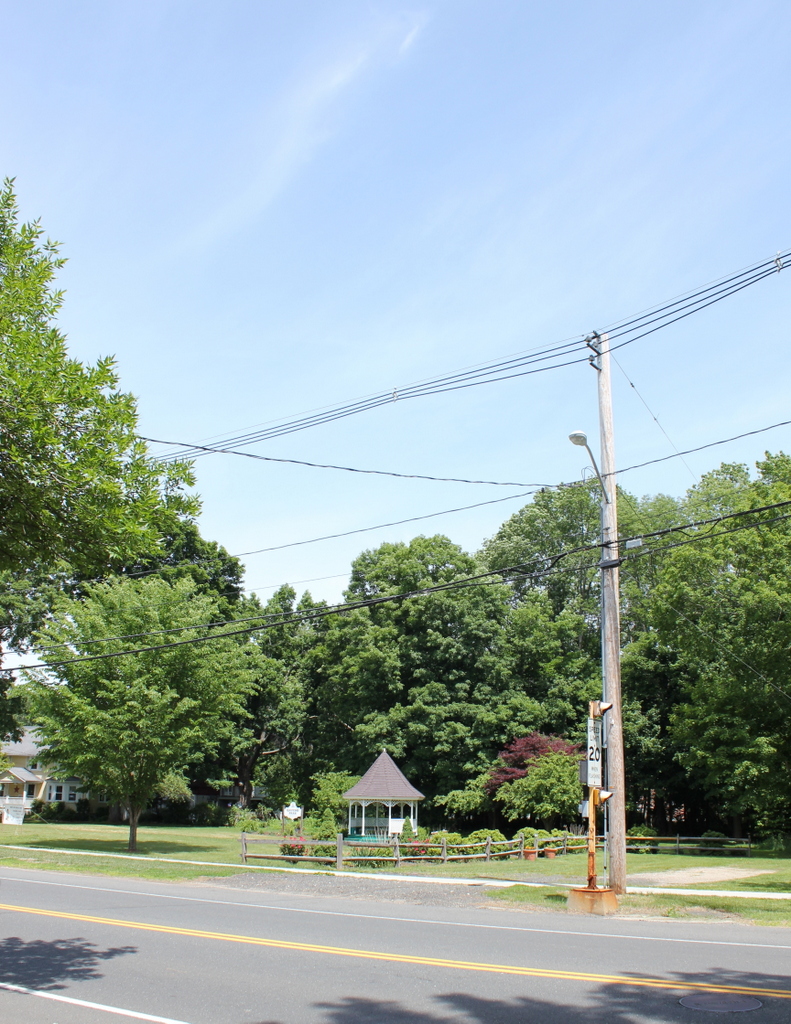 In many New England towns, one of the main features of the town center is a historic 19th century Congregational church, usually painted white and complete with a tall steeple.  However, that isn’t the case in Wilbraham, in part because of a series of fires that destroyed the first three meetinghouses that were located on this site.  The First Congregational  Church in Wilbraham was established in 1741 as an offshoot of the Springfield church.  As was the case in many other towns, however, the location of the meeting house became a major political issue.  In the days before automobiles, it was particularly advantageous to live near the meeting house, and in Wilbraham the settlers in both the northern part of town (present-day Wilbraham) and the southern part (present-day Hampden) wanted a meeting house location that was convenient for them.  Eventually, a compromise was reached and the meeting house was built on Wigwam Hill, halfway up a mountain in a sparsely-populated location that presumably only worked because it was equally inconvenient to everyone.

Eventually, however, it began to make sense to have a meeting house in the center of town, so in 1794 the church moved to this location on Main Street.  It wasn’t just the congregation that moved, though.  In true Yankee frugality, the building itself was moved down the mountain and over to this site, where it stood until 1857, when a new church building was completed.  The old meeting house was moved and used as a stable until 1877, when both generations of Wilbraham churches were destroyed in a fire.

The third meeting house, which is shown in the first photo here, was completed in 1878 and was used until 1911, for reasons that the second photo makes very clear.  On July 5, 1911, the steeple was struck by lightning, and the resulting fire consumed the entire church.  I don’t know how long it had been burning by the time the photograph was taken, but it is a ghostly image, with the skeletal remains of the steeple silhouetted against the flames in the background.

Following the fire, the church merged with the Methodist church to form the Wilbraham United Church.  They alternated between the rebuilt church at this site and the Methodist church next to the Wilbraham Academy campus until 1935, when the church here became their full-time home.  However, the congregation began to outgrow that building, so a fifth-generation Wilbraham church was built a short distance away in 1958; this building is still in use today.  The 1911 church was demolished in 1962, and today the site of the first four Congregational churches in Wilbraham is now a public park. 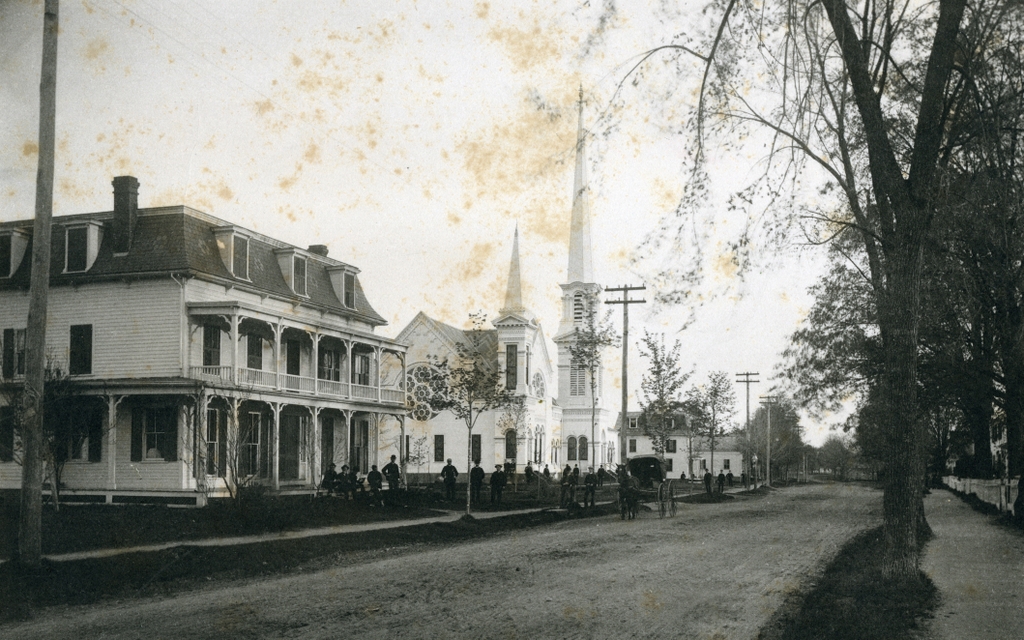 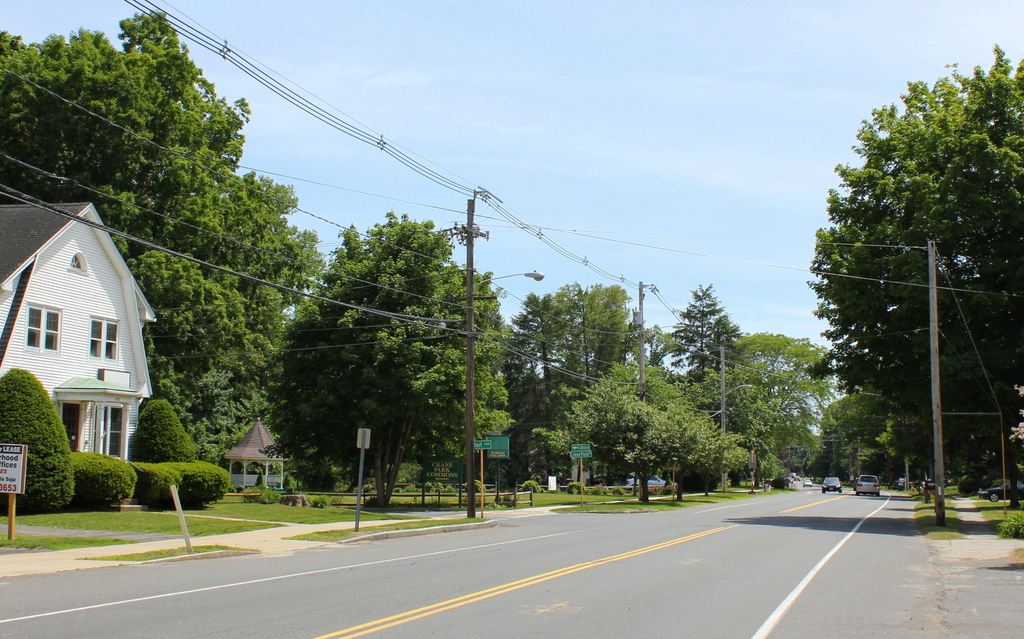 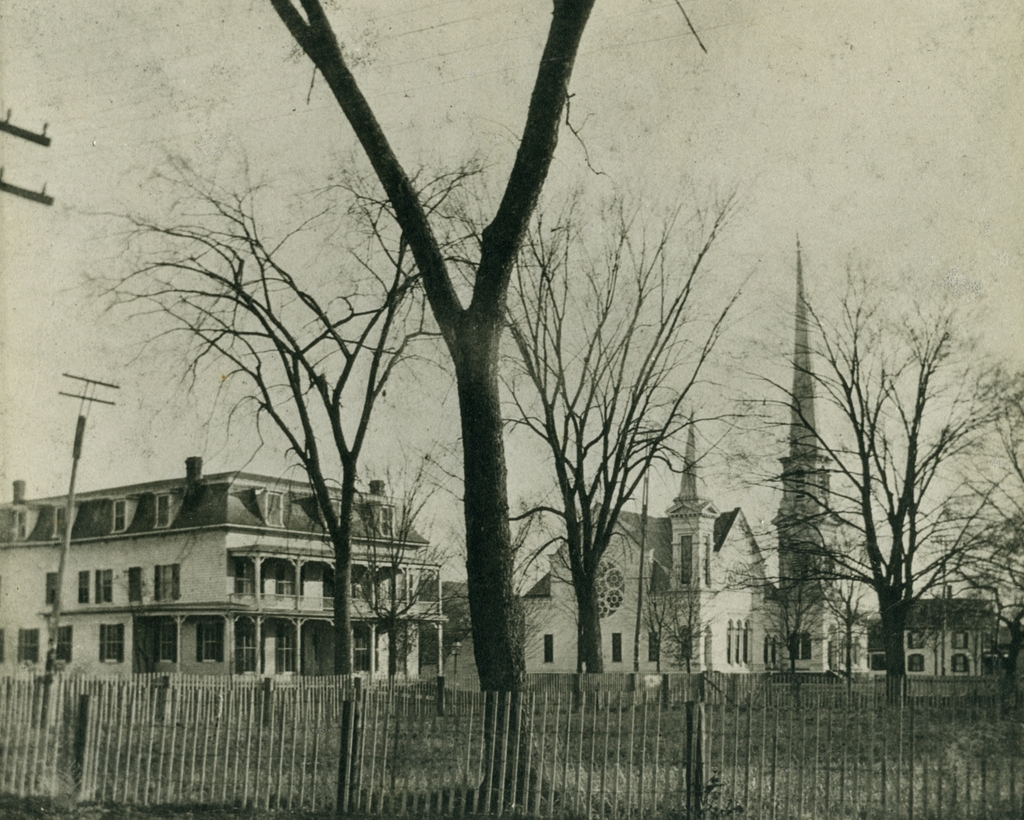 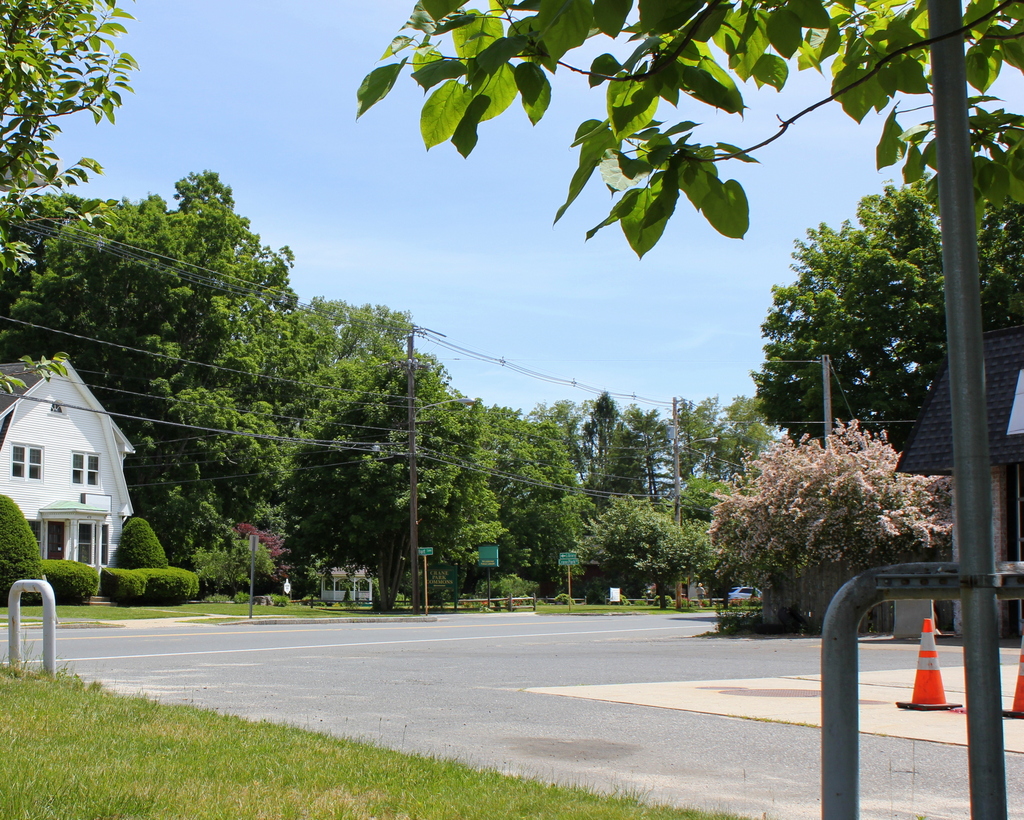 Looking south on Main Street from the corner of Springfield Street in 1903. Image courtesy of the Wilbraham Public Library. 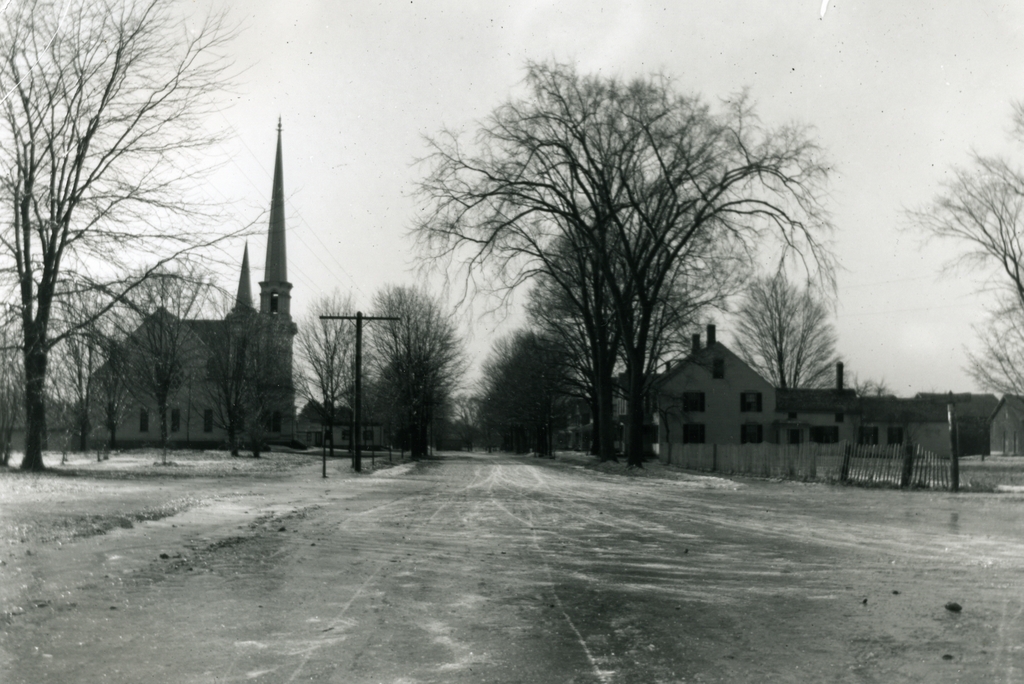 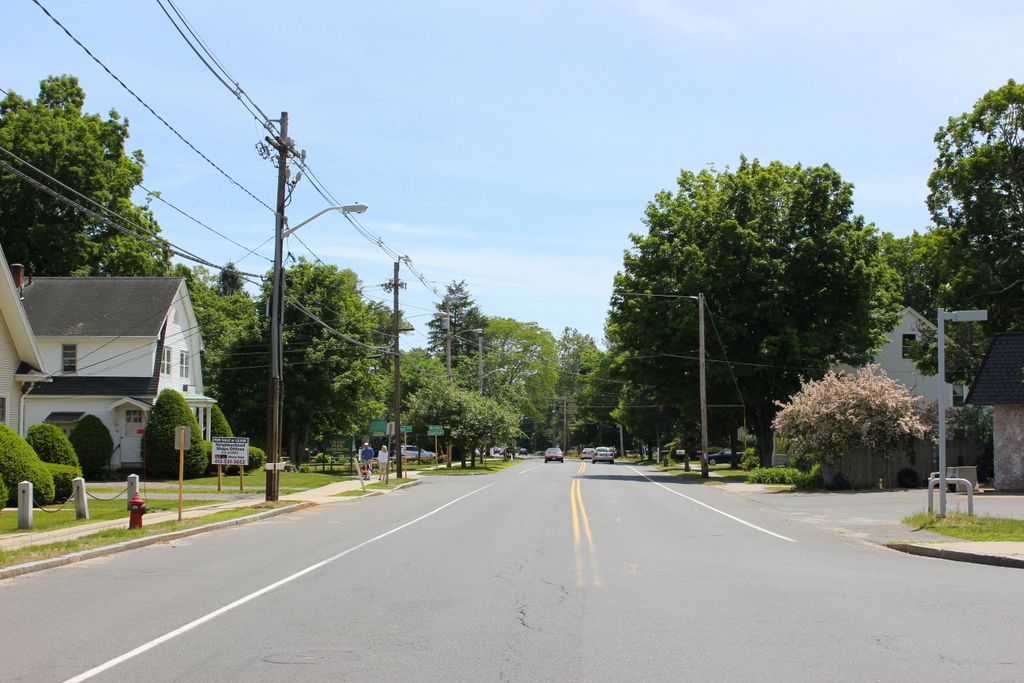 In the past 112 years, Wilbraham has seen significant population growth, but overall its downtown area has retained the small-town feel that it had when the first photo was taken. At the turn of the 20th century, the town’s population was actually in decline, having lost about 25% of its population between 1850 and 1900.  Like many other New England towns, its soil wasn’t particularly well-suited for large-scale farming, and while other cities and towns were industrializing in the 19th century, Wilbraham lacked suitable rivers for any significant industrial development.

It wasn’t until the second half of the 20th century the population started to grow dramatically, with former farmland being developed into residential neighborhoods.  Today, Wilbraham is an affluent suburb of Springfield, and its town center doesn’t look much different from 100 or even 200 years ago, with most of the buildings along Main Street dating to the 18th or 19th centuries.  One such house is the Isaac Brewer House, visible on the right-hand side of both photos.  It was built around 1748, and is one of the oldest houses in the town.  Across the street, however, the old First Congregational Church is gone; it burned in 1911, and today Gazebo Park occupies the spot where the church once stood.