The Second Congregational Church in the center of Hartford, around 1903-1910. Image from The Old and the New. 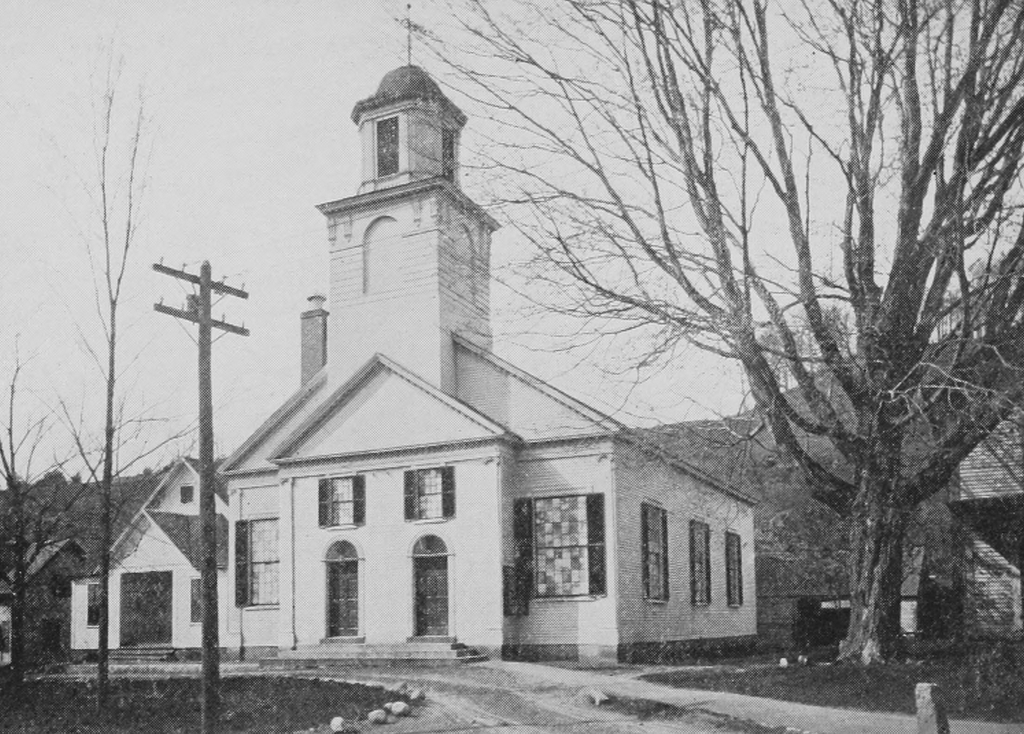 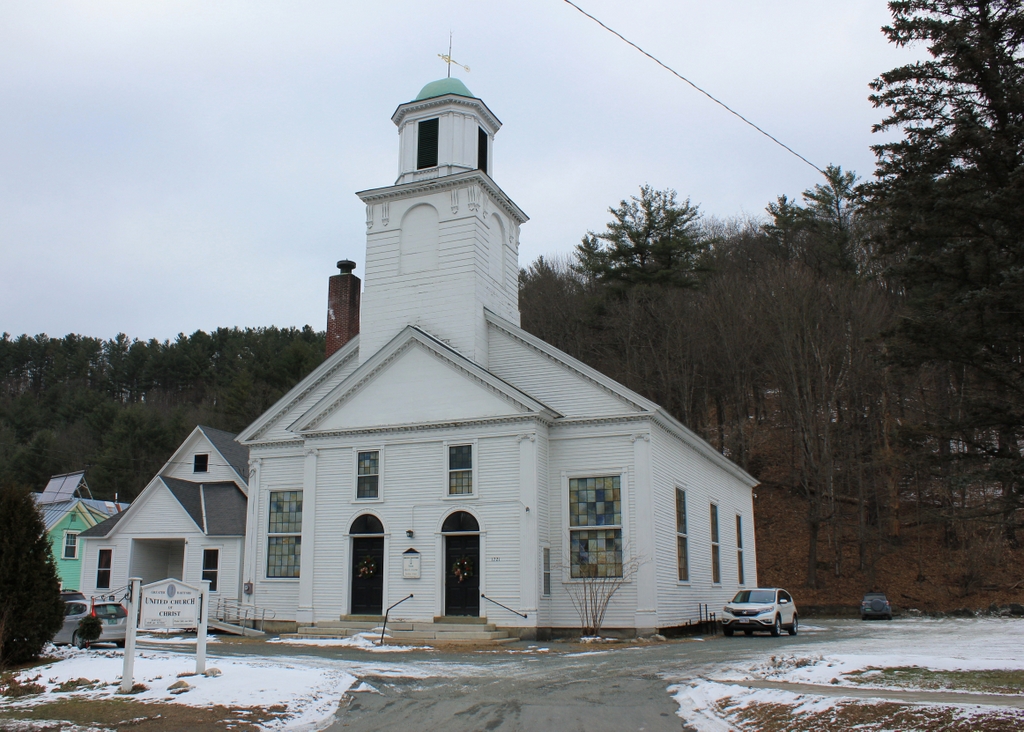 The present-day town of Hartford consists of five distinct villages, spread out across nearly 50 square miles of land. During the first half of the 19th century, this village here along the banks of the White River developed into the de facto town center. It was known as White River Village, and in in 1827 the Congregational Society of White River Village—later renamed the Second Congregational Society of Hartford, Vermont—was established here, with the intent of constructing a meeting house here.

This building, which is shown here in these two photos, was completed in late 1828, and it was formally dedicated on January 8, 1829. It was constructed by Jedediah Dana of Lebanon, New Hampshire, with a design that was typical for New England churches of the period, including a tower and belfry above the main entrance. On the interior, the church could seat 400 people, with pews on either side of two aisles, along with a gallery in the rear of the church.

As was often the cases in churches at the time, parishioners purchased their pews. Prices started at $52, a considerable sum for the 1820s, and the more desirable pews carried a premium. Individual families decorated and furnished their pews according to their tastes, and in the early years only pew owners could vote in church meetings, with the voting power determined by the number of pews that the person held. In all, 61 pews were sold when the church was completed, for a total of $3,788.50, which nearly covered the $4,297 that it cost to construct the building.

The church remained in use throughout the 19th century, but by the turn of the 20th century it was in need of a major renovation. This work, which was done in 1902-1903, included converting the gallery into a meeting room, replacing the heating and ventilation systems, installing new carpet and upholstery, and reducing the seating capacity to 300. Both the interior and exterior were also remodeled with Colonial Revival-style features, which were added by local architect Louis S. Newton.

The first photo was taken sometime soon after these renovations were completed. Since then, very little has changed here on the exterior. Aside from the lack of shutters in the present-day view, the church looks the same as it did more than a century ago, and it remains in use as an active church, now known as the Greater Hartford United Church of Christ. Along with the other buildings here in the village center, it is now part of the Hartford Village Historic District on the National Register of Historic Places. 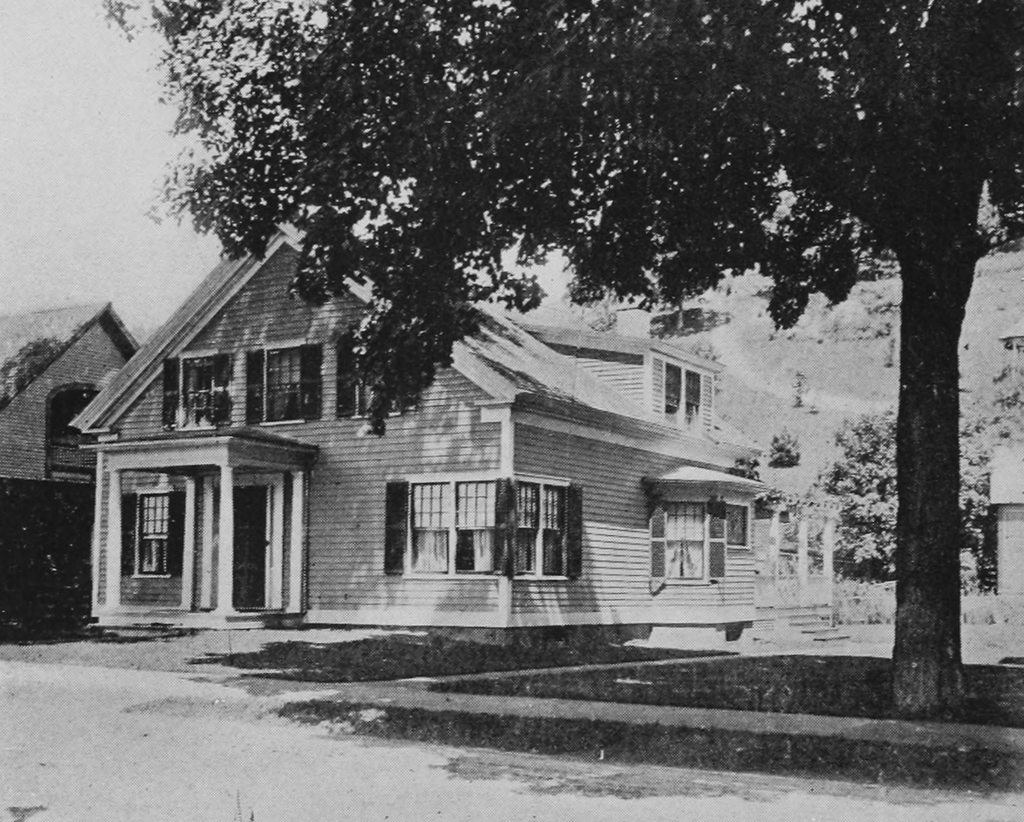 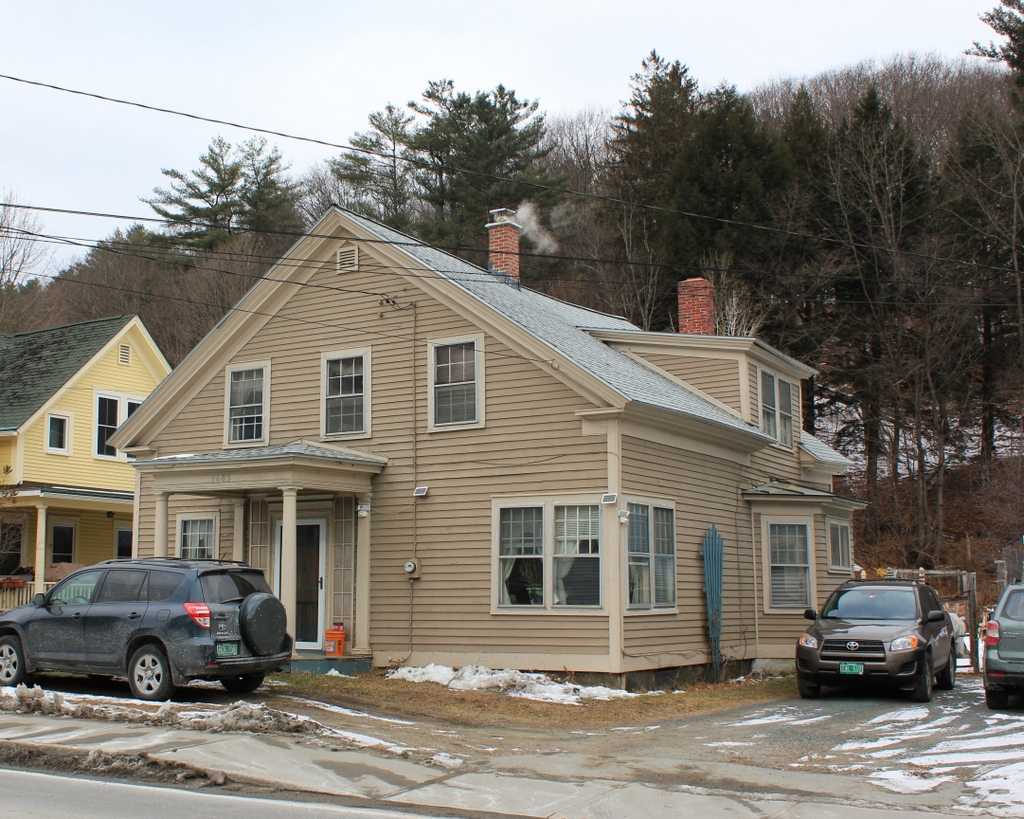 This Greek Revival-style cottage was built around 1859, and its earliest recorded owner was George Brockway, a chair manufacturer who was listed here as the owner in the 1869 county atlas. It does not indicate whether he personally lived here or just owned the property, but it seems likely that this was his home, and the 1870 census shows him living in Hartford with his four young children, who ranged in age from three months to four years old. He ultimately sold the property for $1,400 to John H. French in 1871, and he died two years later at the age of 43.

In 1884, the house was purchased by Almira L. Newton, who lived here for many years along with several other family members, including her sister Caroline and her brother Louis. None of the three siblings evidently ever married, although Almira raised her adopted son Bradleigh here. All three of the Newtons were living at the house during the 1900 and 1910 censuses, but Louis appears to have moved elsewhere in town by 1920, and in 1921 he relocated to Burlington.

Louis S. Newton was a noted local architect. Here in Hartford, he is perhaps best remembered for his 1903 remodeling of the historic Second Congregational Church, and he also did some work here on his sister’s house, adding Colonial Revival-style details around 1900. Elsewhere, his other works consisted of a variety of houses and commercial buildings, including both renovations and new construction. He designed the Occom Ridge houses at nearby Dartmouth College at the turn of the 20th century, and in 1914 he restored the Old Constitution House in Windsor, which is regarded as the birthplace of Vermont.

The house remained in the Newton family until at least the early 1940s, and it has since changed ownership many times over the years. However, its appearance has remained remarkably unchanged throughout this time, with few exterior changes more than a century after the first photo was taken. Today, the house is part of the Hartford Village Historic District, which was added to the National Register of Historic Places in 1998.