The view looking east on Chestnut Street, between Second and Letitia Streets in Philadelphia, around 1842-1845. Image taken by William G. Mason, courtesy of the Library of Congress. 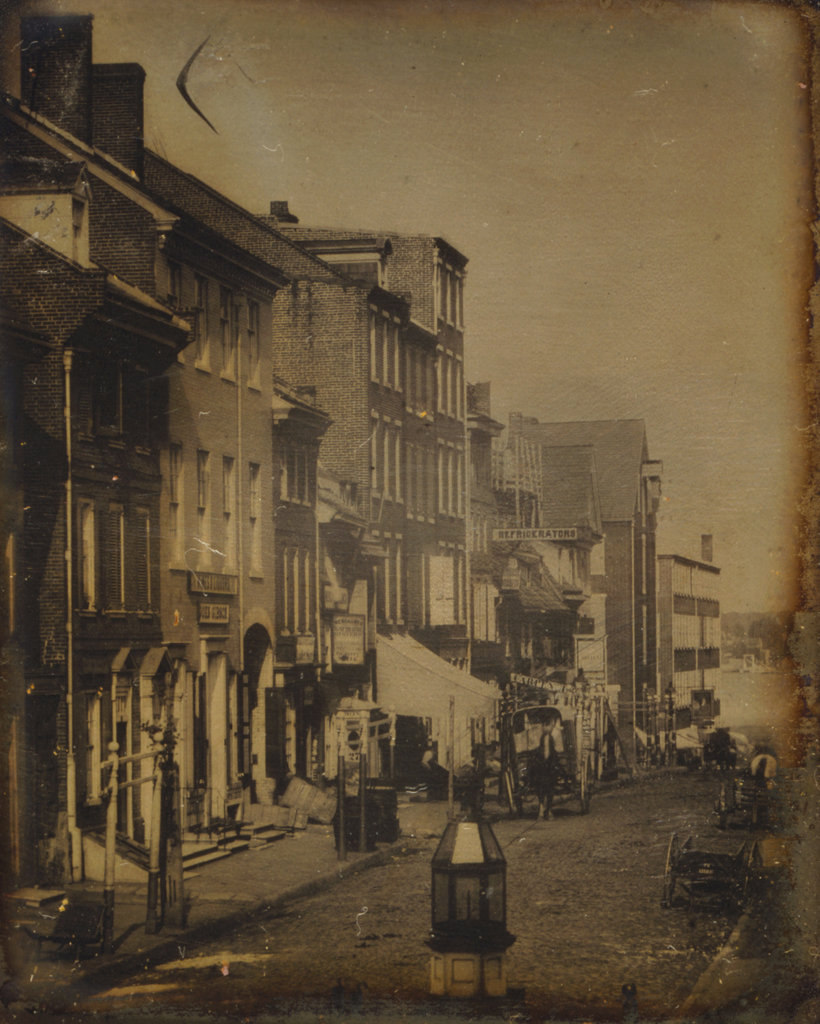 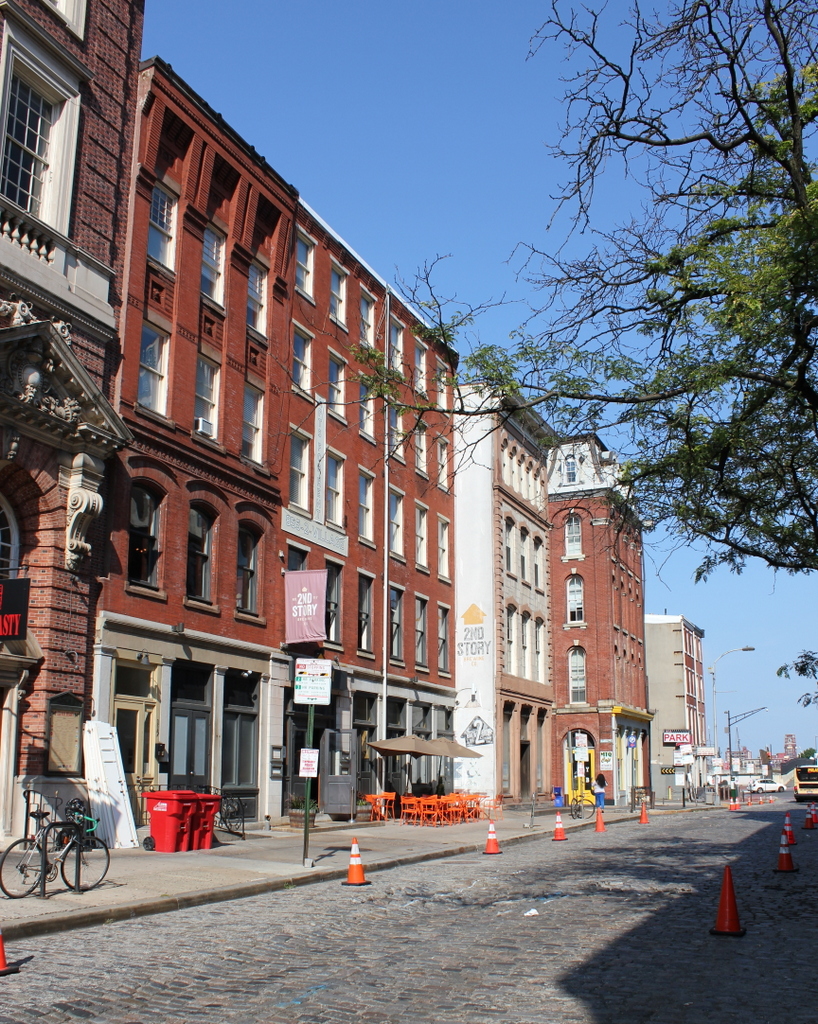 As with the image in the previous post, the first photo here was taken by William G. Mason, in the early years of photography. It was possibly taken on the same day as the image in the other post, and it shows a similar scene; it was taken only about 50 yards east of the other photo. However, unlike that photo, which is a photograph of the original image, this photo here is the original daguerreotype taken in the 1840s, so it has a much higher image quality.

The first photo here shows a mix of commercial buildings on the north side of Chestnut Street, extending all the way down to the Delaware River in the distance. Most were likely built in the early 19th century, although it is possible that some of them, especially the shorter ones, might date back to the 18th century. Several signs are legible, including two on the three-story brick building on the left with the arched doorway. As indicated by the signs, this building was occupied by wine and liquor dealer John Gibson. Further to the right, the small two-story building has a partially-legible sign advertising lunch and oysters, and even further in the distance is a sign that reads “Refrigerators.” This likely referred to ice boxes, which became popular during this period due to the growth of the commercial ice industry in the United States.

Just a few years after the first photo was taken, the building on the left suffered a fire that destroyed much of John Gibson’s liquor business. The fire, which occurred on the morning of September 26, 1846, started in the distillery in the rear of the property. According to contemporary newspaper accounts, some of the liquor boiled over, igniting nearby flammable materials and spreading to the building here on Chestnut Street. Firefighters were able to contain the fire, which did not fully engulf this building or spread to its neighbors. However, Gibson’s still was almost entirely destroyed, as was some of the liquor that he was producing.

Today, nearly 180 years after the first photo was taken, the streetscape here is not dramatically different. This block of Chestnut Street is still lined with historic 19th century brick commercial buildings, and even the street itself is still paved with cobblestones. However, the buildings themselves are different; all of the ones from the first photo appear to have either been demolished or heavily altered at some point in the 19th century. Based on their ornate facades, the brick building on the left and the two just to the right of the center are clearly from the late 19th century, and the one that is partially visible on the extreme left was built in the early 20th century. The only possible survivors from the foreground of the first photo are the two matching five-story buildings in the center of the 2019 photo. They have similar architecture to the ones in the first photo, it is possible that one or both of these might have been built in the first half of the 19th century and subsequently altered.

Looking east on Chestnut Street from the corner of Second Street in Philadelphia, around 1843. Image is an 1859 photographic reproduction of a daguerreotype taken around 1843. Courtesy of the Library Company of Philadelphia, Frederick De Bourg Richards Photograph Collection. 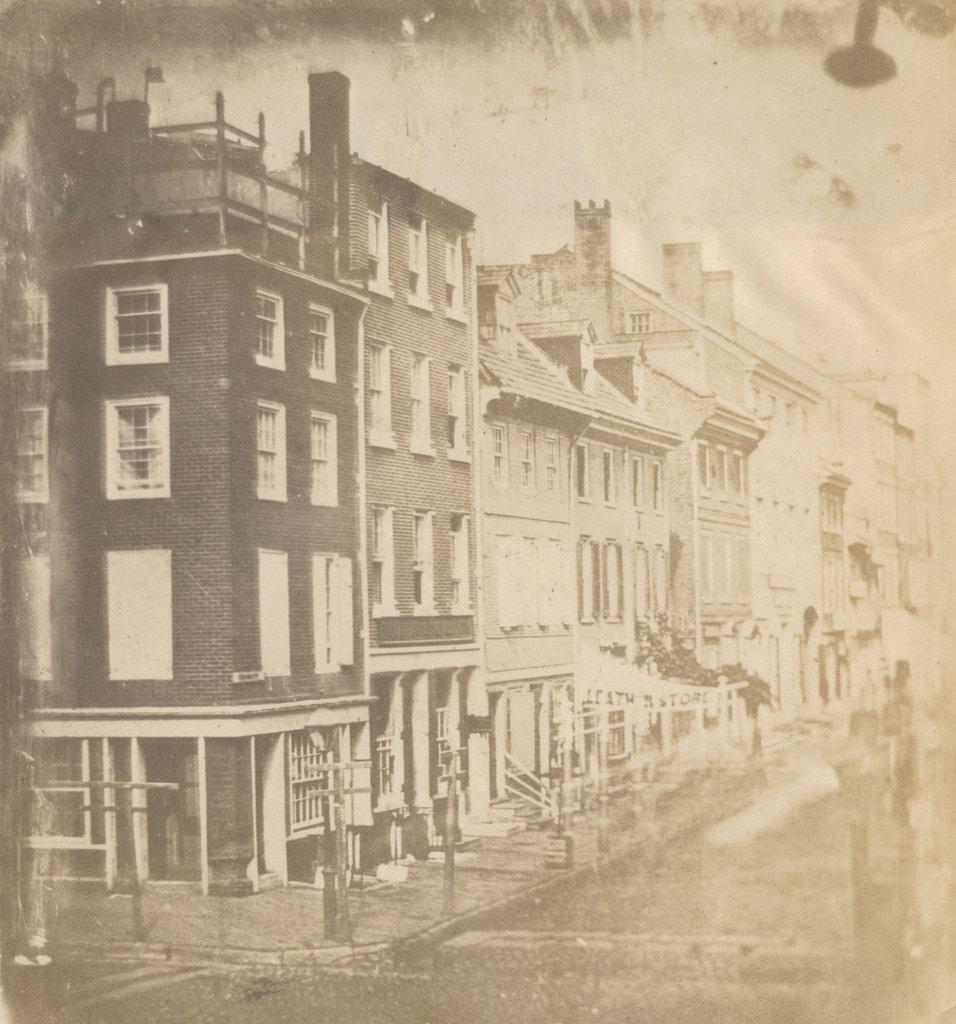 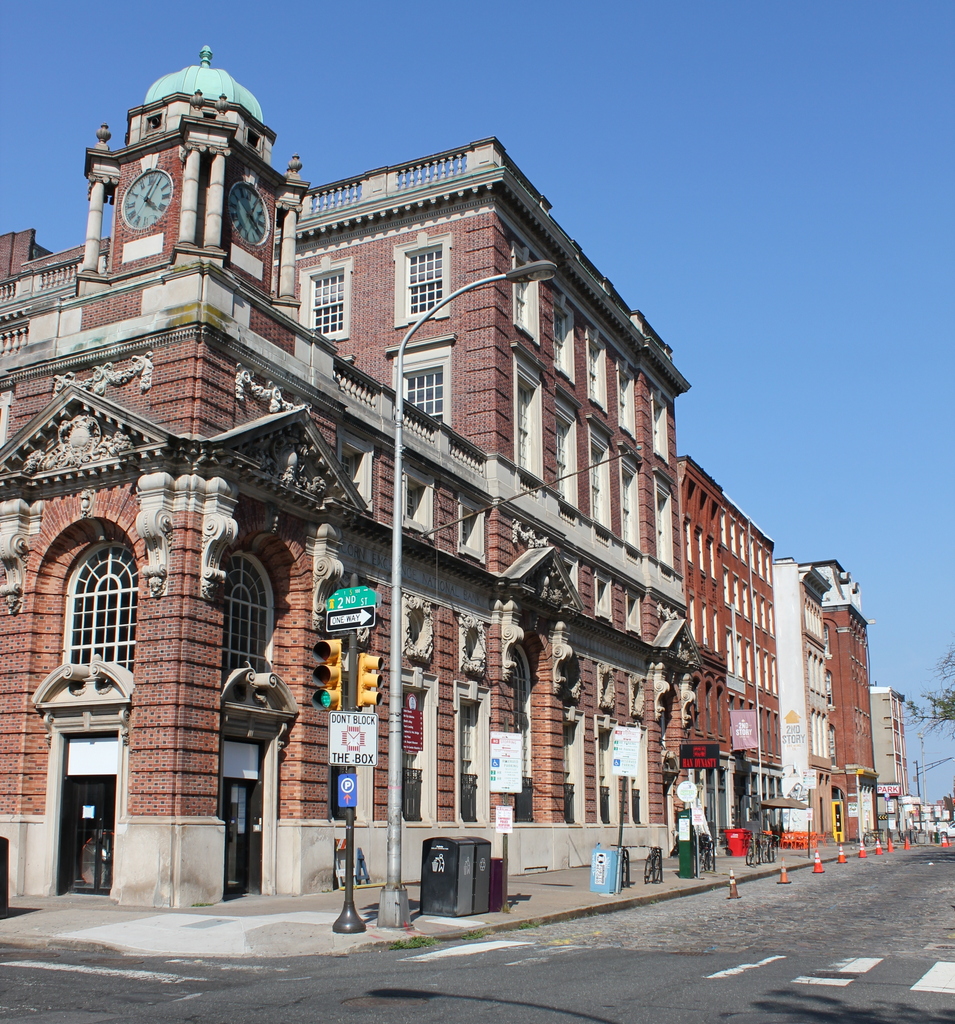 This is likely the oldest historic photo that I have featured on this blog, dating back to the very early years of photography. The actual photographic print was made around 1859 by Frederick De Bourg Richards, but the image appears to have been from a daguerreotype taken around 1843 by William G. Mason. Daguerreotypes were the first commercially successful photographic medium, producing high-resolution images that rivaled even modern digital cameras. However, daguerreotypes were also difficult to reproduce, as the process yielded only a single image on glass. Unlike later plate glass negatives, which could be used to create any number of prints at varying sizes, daguerreotypes could not be directly converted into prints; the only way to duplicate one was to photograph the original, and then make prints of that photograph. The above photo was one such example of this, ensuring the preservation of the image even though the original daguerreotype might very well be lost to history by now.

This image, along with several others taken by Mason during the 1840s, shows one of the earliest photographic glimpses of the streets of Philadelphia. At the time, the buildings along this block of Chestnut Street were predominantly brick commercial buildings, probably built early in the 19th century. The buildings occupied relatively narrow lots, with most being only three window bays in width, and almost all of them are either three or four stories in height. Aside from the two buildings in the foreground, most have pitched roofs. This was fairly typical for commercial buildings of the era, although by the second half of the 19th century flat roofs became more common. Because this image is a photograph of a photograph, there is not much fine detail, and only one sign is readily legible: an awning on the fourth building from the foreground, which identifies it as a leather store.

The buildings in the foreground appear to have been demolished within a few decades after the first photo was taken, in order to construct a building for the Corn Exchange Bank. This was subsequently demolished around 1900, and replaced with the highly ornate Corn Exchange National Bank building in the present-day scene. The building originally consisted of just the section closest to the corner of Chestnut and Second Streets, but it was steadily expanded during the early 20th century, eventually reaching its current form in the early 1930s.

Today, nearly 180 years after the first photo was taken, this scene still consists of historic, low-rise commercial buildings. However, it seems unclear as to whether any of the buildings from the first photo have survived, or if they were all replaced later in the 19th century. Beyond the Corn Exchange Bank, most of the other current buildings have relatively ornate exteriors, suggesting that they were either built or heavily altered during the second half of the 19th century. However, two of these buildings—located at 117 and 119 Chestnut Street—have much more plain exteriors, so it is possible that they may have been built prior to the first photo and expanded over the years.