The Massasoit House in Springfield, around 1882. Image from Springfield Illustrated by James D. Gill (1882) 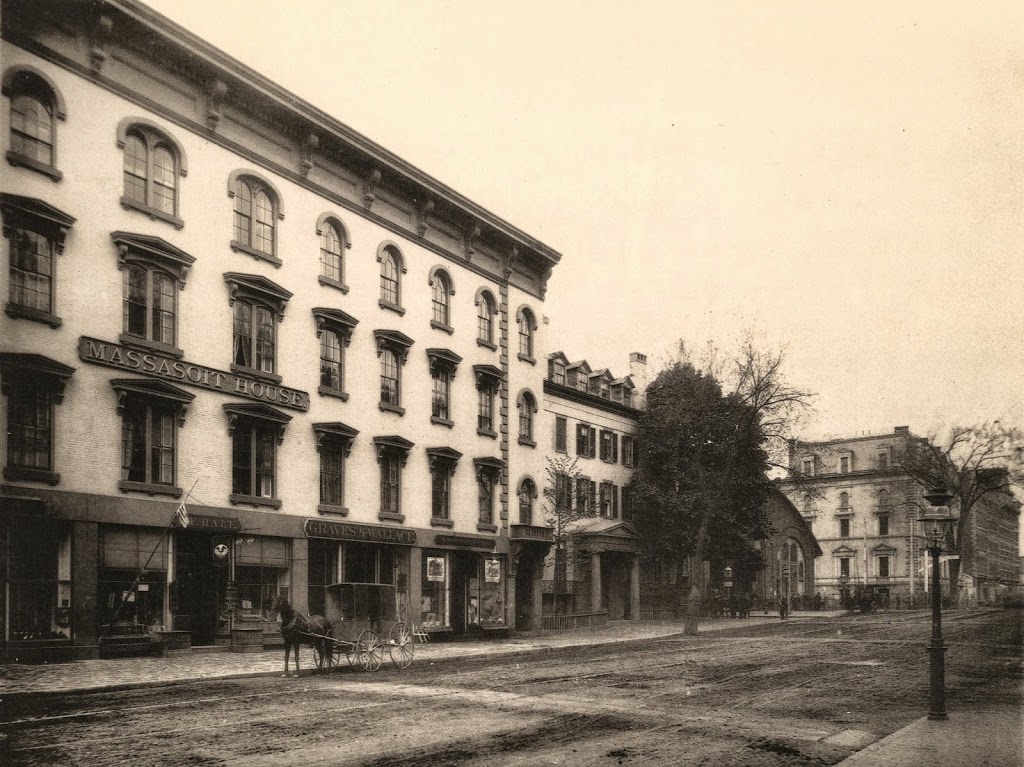 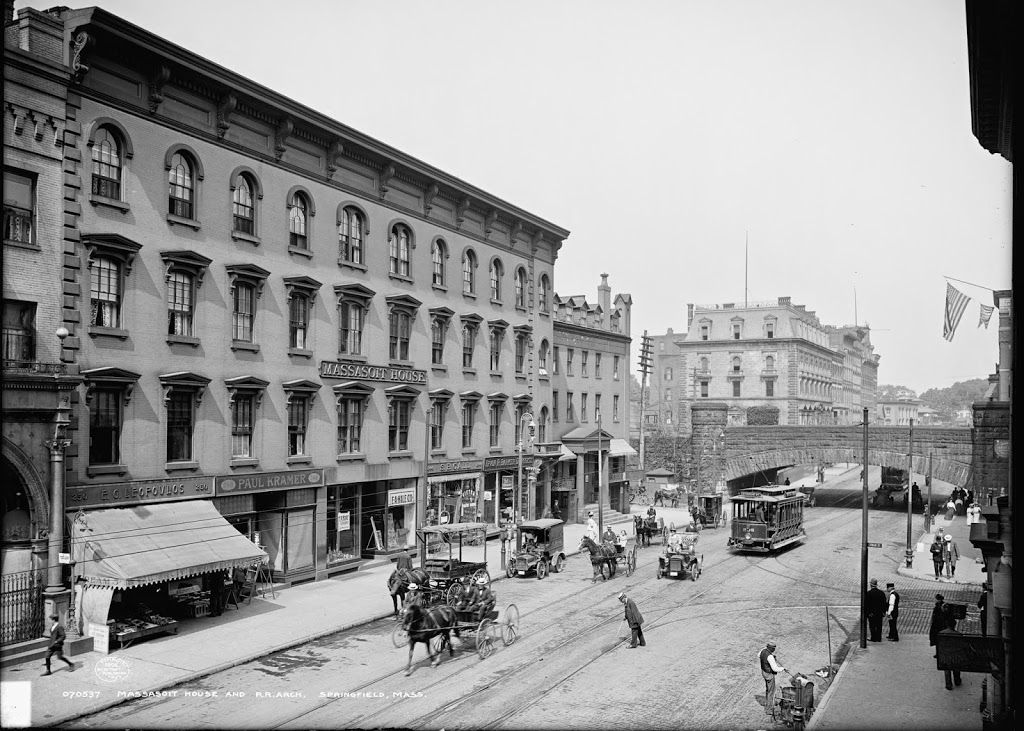 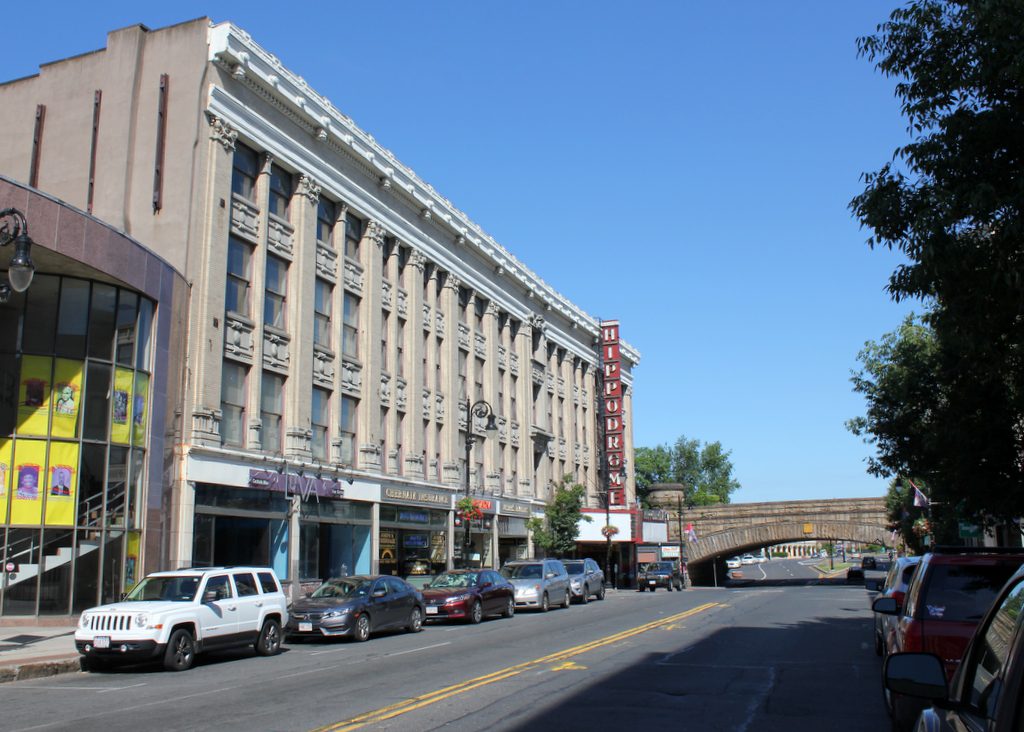 This scene on Main Street in Springfield was prime real estate when the first two photos were taken.  The hotel building in those photos, the Massasoit House, opened in 1843, right next to the railroad depot (the building partially hidden by a tree in the right-center of the 1882 photo), just four years after the railroad came to Springfield.  It was the perfect place for a hotel, because the railroad depot made this location the transportation hub of the city, and the building was soon expanded, first with a wooden wing to the south along Main Street in 1847, and then a brick wing to the rear of the original building in 1853. Then, in 1857 the wooden section here on Main Street was demolished and rebuilt in brick. The first two photos show the original 1843 section of the hotel, which stands in the distance in the center of the photos. On the left side of both photos is the 1857 expansion, with its Italianate-style architecture.

With these additions, the Massasoit House had 130 guest rooms. It was one of the premier hotels in the region, and over the years it had many prominent visitors. Among these were authors such as Charles Dickens, Ralph Waldo Emerson, Oliver Wendell Holmes, and Henry Wadsworth Longfellow; Civil War generals William T. Sherman and George B. McClellan; abolitionist John Brown; prominent politicians such as Henry Clay, Jefferson Davis, Stephen Douglas, William Seward, and Daniel Webster; and at least four US presidents: Franklin Pierce, Andrew Johnson, Ulysses S. Grant, and Theodore Roosevelt. Roosevelt’s visit occurred right around the time that the first photo was taken, when he and his first wife Alice spent their wedding night here in 1880.

Also around the time that the first photo was taken, the Massasoit House hosted a series of meetings that helped to establish many of the important rules of football. This sport had become popular in the post-Civil War era, especially in Ivy League schools, but there were few standardized rules; some schools played a sport that was similar to modern soccer, while others had rules that were similar to rugby. Because of the need for unified rules, delegates from various schools gathered here at the Massasoit House in 1876 to iron out the details. The result was the adoption of 61 new rules, which helped form the basis for modern American football. Similar meetings would occur here on a regular basis through 1882, giving Springfield a strong claim to having been the birthplace of modern football, in addition to its more famous role as the birthplace of basketball.

In the meantime, the exterior of the hotel saw few changes between the 1882 and 1908 photos. However, within a few years it would undergo dramatic changes. In 1912, the Main Street façade of the building was rebuilt with a Classical Revival design, as shown in the present-day scene. It would remain a hotel until 1926, and then the building was again altered. The hotel rooms were converted into offices, and in 1929 the Paramount Theater was added behind the building. It was one of the finest movie theaters in the area during its heyday, but by the 1960s it was in decline. It was later renamed the Julia Sanderson Theater, and then in 1999 it became the Hippodrome nightclub.

Today, despite the many additions and alterations over the years, portions of the old 19th century hotel still stand behind the newer façade, although it is hard to tell in this scene. In recent years, the building has seen only sporadic use, aside from the ground floor storefronts along Main Street, but it nonetheless stands as an important landmark in downtown Springfield. As was the case nearly 180 years ago, it still enjoys a close proximity to the railroad station, being just a short walk away from the newly-restored Union Station. This building has likewise been the subject of revitalization plans, although none of these have quite come to fruition yet.

One thing lacking in the 1882 photo is the iconic stone arch, which wasn’t built until 1890. It helped to alleviate congestion on Main Street by elevating the railroad, and it also coincided with the opening of a new Union Station just a short walk away on Lyman Street. By the 1908 photo, the railroad arch is there, and the scene captures an interesting combination of transportation modes. Along with the railroad in the distance, it shows trolleys alongside a roughly equal number of automobiles and horse-drawn carriages, during the period of transition from draft animals to internal combustion engines.  Today, as seen in the 2017 photo, buses have replaced the trolleys, and automobiles clearly won out over horses; not a single horse-drawn carriage is to be seen on Main Street anymore.