The former Warriner’s Tavern on State Street in Springfield, around 1893. Photo from Sketches of the Old Inhabitants and Other Citizens of Old Springfield (1893) 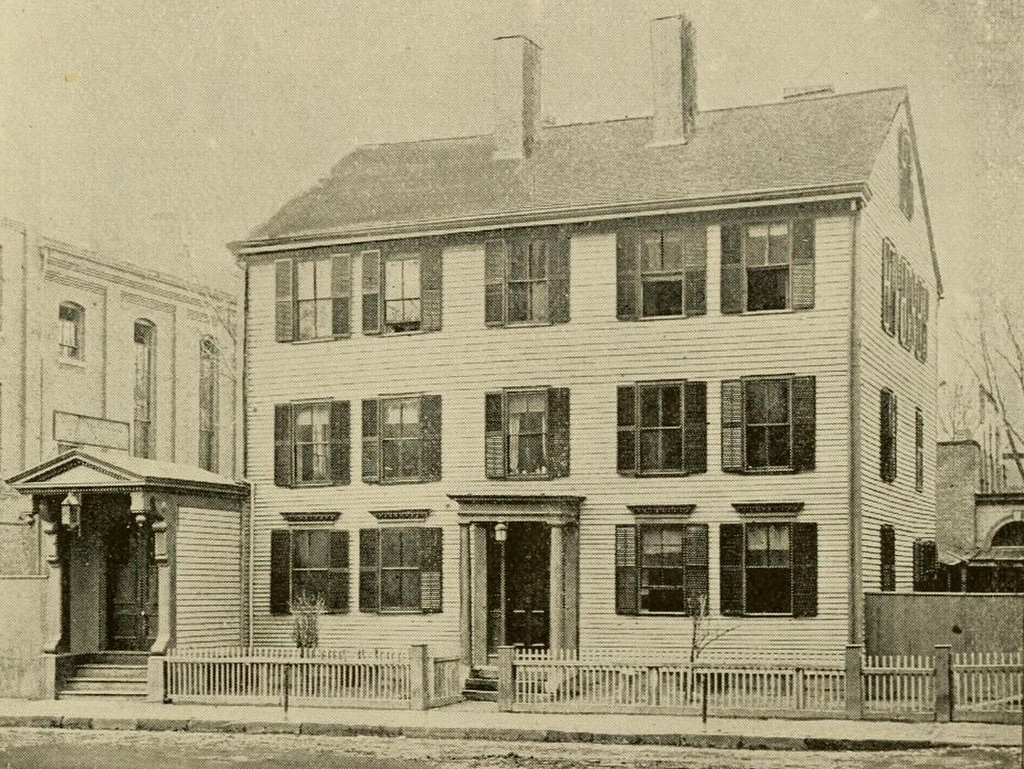 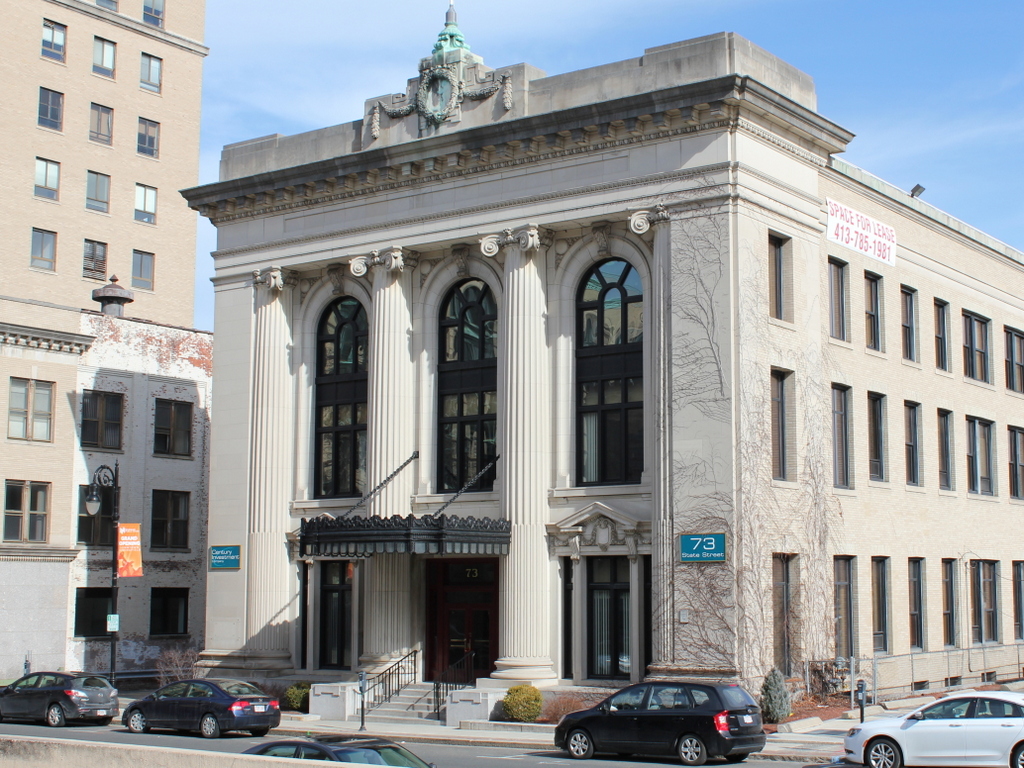 The building in the first photo was built around 1773, and was originally located a half a block away at the corner of Main and State Streets.  It apparently had a number of different names over its long lifespan, but it was built by Thomas Bates and operated as the Bates Tavern for many years.  However, probably its most notable owner was Jeremy Warriner, and under his ownership starting in 1820, the tavern was variously referred to as the United States Hotel, Eagle Tavern, Warriner’s Tavern, and “Uncle Jerry’s.”  He appears to have sold it by the 1840s, and in 1847 the building was moved to its location on State Street.

During Warriner’s ownership, when the tavern was still located on Main Street, it was one of Springfield’s premier taverns along the stagecoach lines, and hosted many distinguished guests, but it was also part of the Underground Railroad.  Many runaway slaves became employees here, and in 1907 the Springfield Homestead published the recollections of Julia Lee, the daughter of Mary Sly, who was one of the runaway slaves.  Lee’s narrative provides a fascinating account of the Underground Railroad and life in Springfield during the mid 19th century:

I don’t know just when I was born, but I know where I was born. I was born in the old Springfield house, as it is now called, Frank Foot tells me that Emil Wunsch is going to pull it down and put up a big block there. Frank says to me, “Julia, they ought to give you that old house.” Yes I was born there, when it used to stand on the corner of State and Main streets. It was the United States Hotel then and Uncle Jeremy Warriner used to run it. The Springfield house is only the front part of the old tavern, which was a great deal larger than the Springfield house. An Irishman, who lived over on Central street, bought the back part, and it used to run way to a Mr. Sykes’, when Uncle Jerry gave up keeping hotel there.

The way I happened to be born there, my mother, Mrs. Mary Sly, was a cook with Uncle Jerry. She came from Natchez, Miss. up here, and mother was born in New Orleans. Father was a West India man.  Uncle Jerry had all colored help men and women. Aunt Phoebe’s (Mrs. Warriner’s) aunt used to do the cooking. A colored girl, Emily, did all the pastry.  Jane Hall and I helped wait on table. I used to feel quite proud when some of those big folks would come in on the stage and when they’d sit down at the table would say, “Where’s Julia, I want Julia to wait on me.”  Those folks were generous about tipping, too.  They would leave money around under the plates, often 25 cents and sometimes as much as a dollar.

I used to know some of the biggest folks in the country.  Daniel Webster would stop over on his way to and from Boston. Webster always had a parlor and bedroom.  I used to carry his meals up to his room.  He kept by himself a good deal and was always busy.  Rufus Choate used to come here, too.  My! How that man would walk the floor.  Lots of brides used to come and we had bridal chambers for them.  They would send on ahead for rooms and sometimes Jerry would have the band come and serenade them at night.  I couldn’t begin to tell all the people who would come.  Mrs. Harriet Beecher Stowe I remember and Mrs. Samuel Colt of Hartford, and Fanny Elsley, the great dancer, and Henry Clay, I most forgot him, and P.T. Barnum and Jennie Lind and Louis Kossuth.  After uncle Jerry gave up keeping the tavern and went over on Howard street to live I went with him, and Jenny Lind when she came here in 1851 stayed with Jerry and had her meals sent down from the hotel.  There was Quincy, Harrison Gray Otis and Mr. Cabbot and lots of others.  I liked Jenny Lind the best of all.  She was beautiful and the school children all came around to see her and she was so polite to everybody.  When Uncle Jerry went to what is Chandler’s hotel now I went too.  I stuck by the Warriners as long as they lived.

What good times we all had in those old days at the United States! Uncle Jerry had two or three spans of horses and used to take his guests around and then at night they would gather around the big fire places and go into the parlor and dance.  I was strictly temperate and Jane Hall and I used to march in the front of the cold water processions they used to have.  To be sure Uncle Jerry kept a bar but I didn’t see many getting full, same as they do now.

Uncle Jerry made lots of money, he kept such a good house.  People would come there and he would say he was full and they would say “Well Jerry, we are going to stay here anyway.” It was because he set such a good able you know.  People would room all around and come there to take their meals.  Jerry used to make a specialty of venison suppers, served with spiced gravy and jelly, with little chafing dishes placed around the table.  There was always something to drink, too.  Lots of Springfield people used to come there for suppers, too, Sam Bowles, Homer Foot, George Ashman, Judge Shurtleff and I can’t remember how many others.

Southern people used to be there and I will never forget one family and the time we had.  It was this way: Mrs. Jerome Bonaparte of Baltimore had a head waiter, William Gordon, who ran away and came up north.  Uncle Jerry always harbored all the slaves; In fact our house was one of the underground stations and would have eight or ten hid away sometimes.  Well, this Gordon, was in our house, when who should appear but Mrs. Bonaparte and her family.  They knew their waiter was up north somewhere and my! the fuss they made, but they didn’t get their slave.  Uncle Jerry was too smart for them.

After I got though here I went to Cincinnati and lived with a Mr. Hawkins, a Quaker who also kept runaway slaves escaping from Kentucky.

Uncle Jerry treated me with the best of any one I ever met and in summer he would take me to the summer resorts same as if I was one of the family.  All my relatives are dead and I feel as if I wished I could see the Warriners again.  You like my picture? Well I am sorry to disappoint The Homstead, but I had just one picture and some on stole that out of my album and I vowed then that I would never have another taken.

The event that prompted the publishing of this story was the planned demolition of the old tavern. Another 1907 article, this one appearing in the Springfield Republican, quoted a resident who lamented, “Oh the ceaseless march of improvements! they may soon build the tower of Babel again.” The building was demolished to make way for the United Electric Company building, which stands on the location today.  However, the “march of improvements” continues, and most of the building will soon be demolished to build the MGM Springfield casino, which will retain the State Street facade as an entrance, but is otherwise planning to take down the rest of it.

There is one other MGM connection to the old tavern, though.  In her letter, Lee mentioned how Warriner left the old tavern and went to Chandler’s Hotel.  This was originally known as the Union House, and Warriner was the original owner after it was built in the mid 1840s.  The building still stands today, at the corner of Main and Bliss Streets.  It is one of the oldest commercial buildings in downtown Springfield, but it is scheduled to be demolished this year as part of the casino development.