Looking north on Main Street in Monson from near Lincoln Street, in 1860. Image courtesy of the Monson Free Library. 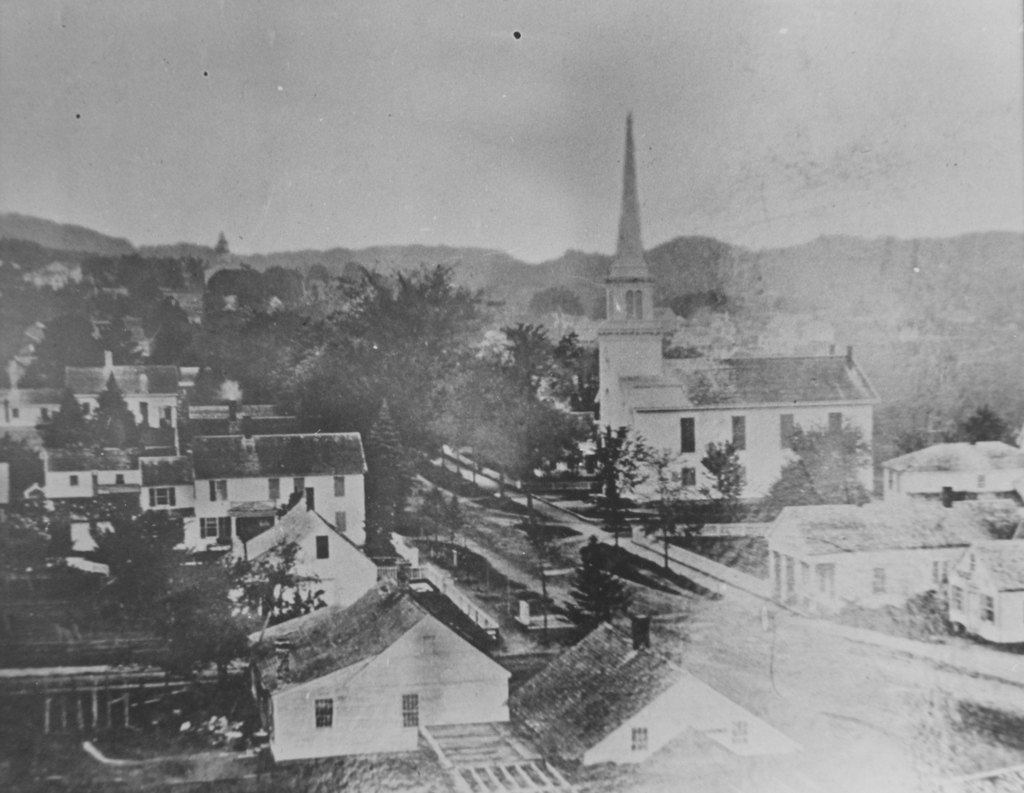 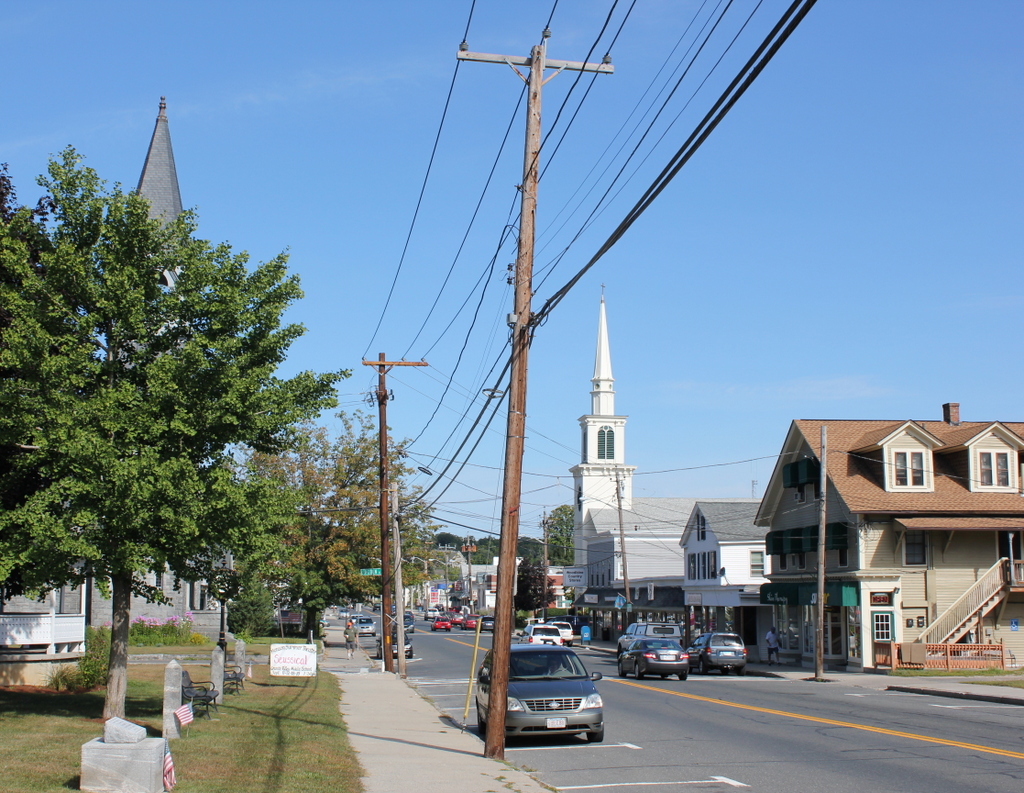 The first photograph is among the earliest known images of Monson, and it shows a town in transition.  Founded 100 years earlier, Monson’s development had been largely limited by geography.  The town center, seen here, is located in a narrow valley with steep hills on either side, making large-scale farming impractical and transportation difficult.  However, 10 years before the first photo was taken, a railroad was built through the town, just out of view to the left.  This helped to spur industrial development, and in the second half of the 19th century the town’s population and economy grew thanks to a granite quarry, along with factories that produced textiles and hats.

When the 1860 photo was taken, this section of Main Street was still mostly residential, but by the end of the century many of these homes would be demolished and replaced with commercial buildings, especially the older homes in the foreground.  Other late 19th century changes included several new churches.  The old meeting house, whose steeple can be seen in the distance to the left, was replaced by a larger church in 1873, and in 1889 the Universalist church was built at the corner of Main and Lincoln Streets; it can be seen to the left in the 2015 photo, partially hidden by the tree in the foreground.

Despite all of the changes over more than 150 years, there are several buildings from the first scene that are still standing today.  The most obvious is the Methodist church, which was built in 1850 at the corner of Main and Cushman Streets.  Today, aside from a new steeple, it still looks essentially the same as it did in the 1860 photo.  Further up Main Street, many early 19th century houses are still standing today, but only a couple are readily identifiable in the 1860 photo.  The fourth house on the left is now the Unitarian-Universalist church parsonage, and it is located just beyond the present-day church and out of view from here.  Beyond it on the far left is the Joel Norcross House, which had been built around 30 years earlier by Emily Dickinson’s grandfather.  It is also hidden from view in the 2015 scene, but it is still standing and has since been converted into business and office space.

The home of Solomon F. Cushman, Jr., on Main Street in Monson, probably around 1900-1920. Image courtesy of the Monson Free Library. 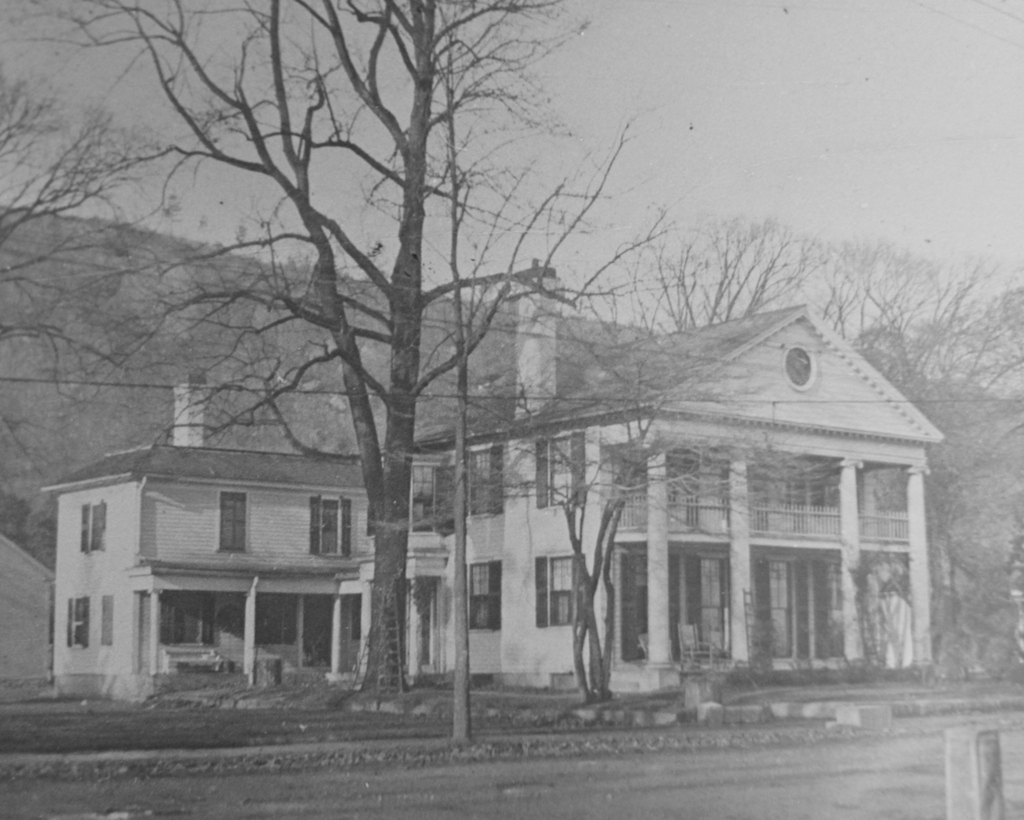 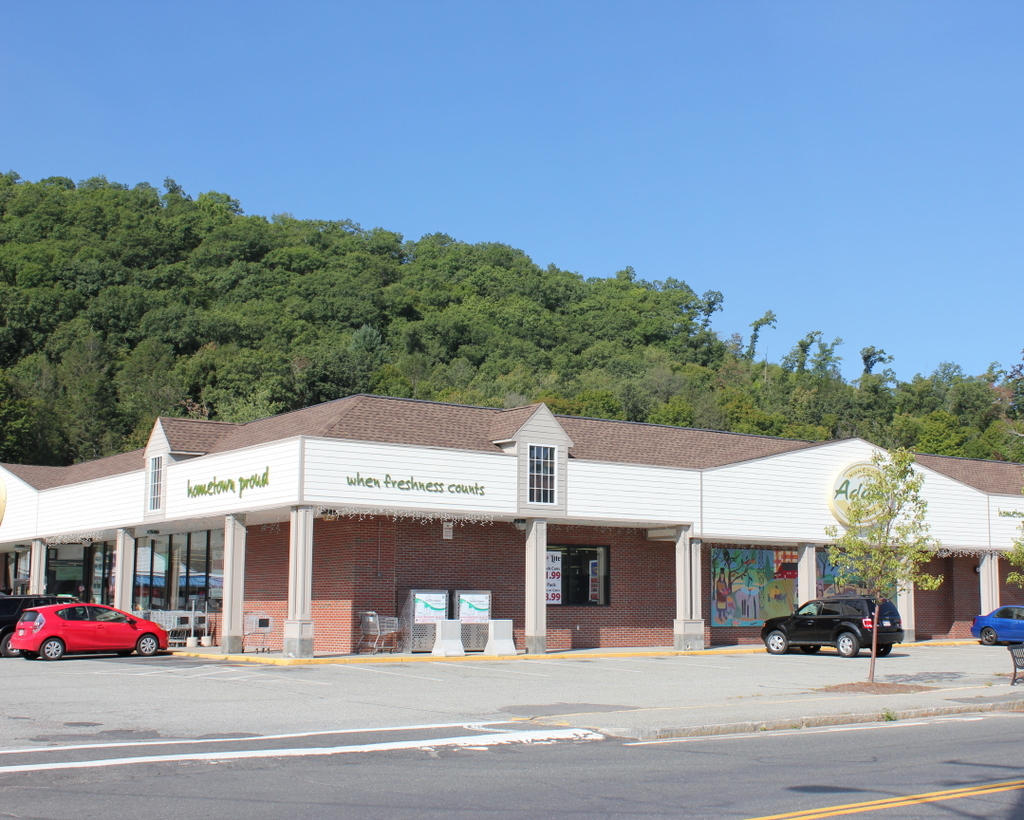 This Greek Revival style house was once the home of Solomon Cushman, Jr., the son of one of Monson’s prominent industrial leaders of the 19th century. His father, Solomon Cushman, Sr., was born in 1826 in Monson, Maine, a small town in central Maine.  After working in farms and lumberyards near his hometown, he became a store clerk, and later moved to Palmer, and then to Monson, Massachusetts, where he became a bookkeeper for the Monson Woolen Manufacturing Company, a textile company with a factory on present-day Cushman Street.

Cushman eventually became the owner of the company, and renamed it S. F. Cushman & Sons in 1877.  The Cushmans grew the company, purchasing a branch factory in 1883 at the corner of Maple and Elm Streets, and rebuilding the main factory on Cushman Street after a fire in 1886.  Solomon, Jr. was born in 1861, and he graduated from Monson Academy in 1880 and from MIT in 1882.  He also attended the Lowell School of Design, and later returned to Monson, where he was put in charge of the branch mill.  When the elder Cushman died in 1900, his five sons took over the company, but they soon began selling it.  The branch mill was sold in 1901, and the main factory operated under the Cushman name until 1912, when it was sold to a hat company.  The building has since been abandoned for many years, but it is still standing on Cushman Street over 125 years after the Cushmans opened it.

The house in the first photo was purchased by Solomon, Jr. sometime between about 1884 and 1894, but the house was much older than that.  Architecturally, it is very similar to the nearby Joel Norcross House, which was built in 1830 and is still standing today.  This house was probably built around the same time, and according to the 1857 county atlas, it was owned by Horatio Lyon, one of the owners of the Monson Woolen Manufacturing Company who first employed Cushman, Sr.  It was later the home of yet another factory owner, Cyrus W. Holmes, who lived here until his much more elegant Holmbrook mansion was completed just up the hill from here around 1870.

Several of the Cushman brothers lived nearby, including the oldest sibling, Edward, whose house on Main Street is now the Monson Senior Center.  I don’t know how long Solomon, Jr. lived here in this house, but he died in 1932 at the age of 70, and the house was subsequently demolished in 1957.  Today, the former Cushman property is a shopping plaza with the Adams supermarket, a Rite Aid drugstore, and several smaller businesses.