The house at 93 Bowdoin Street in Springfield, around 1938-1939. Image courtesy of the Springfield Preservation Trust. 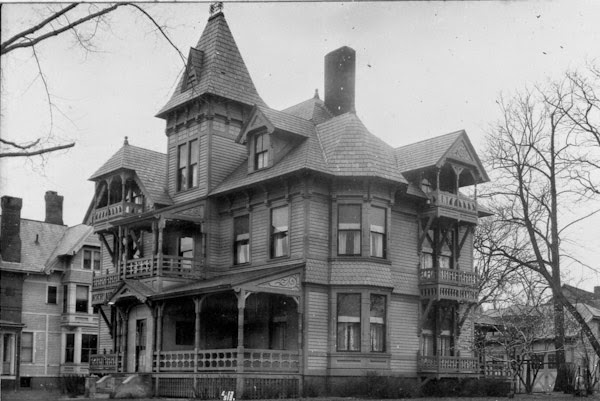 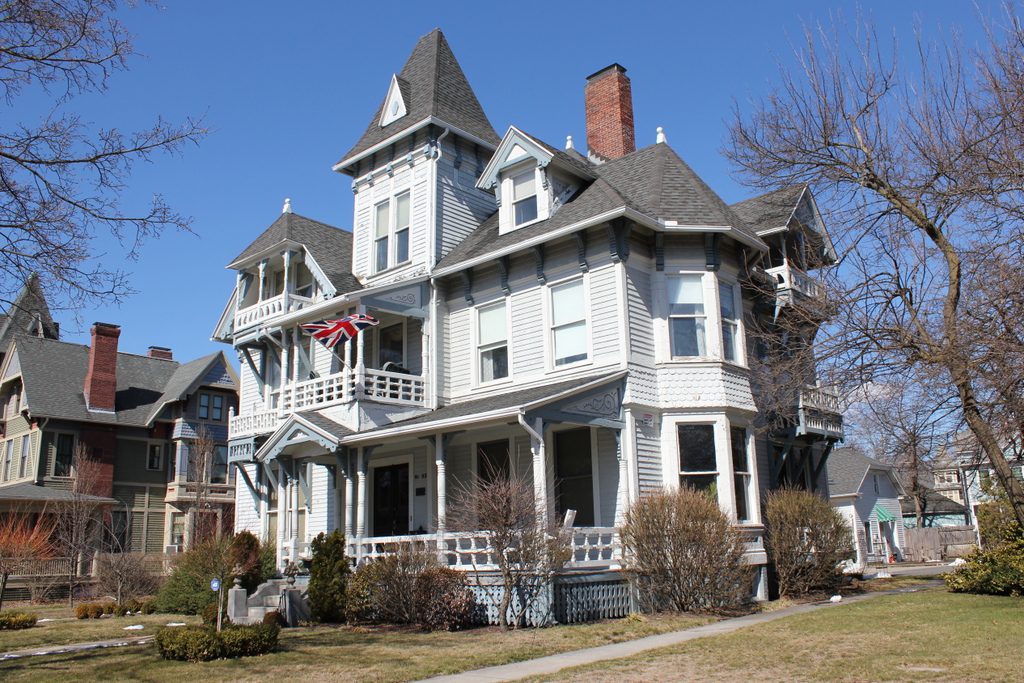 This house was built in 1883, around the same time as the neighboring house at 103 Bowdoin Street, and has a very similar Queen Anne-style design. It was the longtime home of businessman Charles D. Rood and his wife Caroline, who were living here by the late 1880s if not earlier. Charles Rood was born in Ludlow in 1840, and got his start in business as a teenager, working as a clerk at the Indian Orchard Mills. He subsequently worked for a New York City jewelry company, eventually becoming a partner in the firm. This, in turn, led to Rood entering the watchmaking industry, and in 1877 he was one of the founders of the Hampden Watch Company. He later purchased the Aurora Watch Company in Illinois and the Lancaster Watch Company in Pennsylvania, and consolidated them into the Hamilton Watch Company.

In the midst of his watch business, Rood made a brief foray into the burgeoning bicycle industry in the 1890s, becoming the president and treasurer of the Keating Wheel Company. This Holyoke-based company was run by inventor and onetime major league baseball player Robert Keating, whose inventions included baseball’s first rubber home plate. His bicycle company had been floundering, until Rood bailed it out with a sizable investment in 1894. It proved to be a poor decision for Rood, though,with the company later suffering yet another financial crisis.

After losing money in the bicycle industry, Rood returned to the Hamilton Watch Company, and also invested in commercial real estate, building up a significant fortune in the process. However, he made another financial blunder in 1911, when he sold his interest in the company and entered the communications business. He invested in the American Telegraphone Company, becoming its president and general manager. The telegraphone, which was patented in 1898, was an audio recording device that used magnetic wire to record sound, and was intended to compete with the older phonograph, which used etched grooves to play back sound. In the long run, magnetic data storage would prove successful, such as in modern computer hard drives, but in the short run the company failed, and Rood faced serious accusations from disgruntled shareholders over his management of the company. Ultimately, Rood returned to watchmaking and real estate, and in 1924, at the age of 83, he again became president of the Hampden Watch Company.

Throughout these many ups and downs in his career, Rood remained here at his home on Bowdoin Street, where he and Caroline raised their three children, Madeline, Gladys, and Charles Dexter. Caroline died in 1930, and things only got worse after that. The Great Depression was hurting the value of his real estate holdings, and at the same time his son took him to court, trying to have him declared senile in order to take control of his business. The judge denied the request, though, and the elder Rood retaliated by contesting Caroline’s will, which had left most of her estate to the children. However, the original will was upheld, with Rood receiving only a fraction of his wife’s estate.

Charles D. Rood’s business career spanned from the beginning of the Gilded Age to the depths of the Great Depression, and he lived in this house for most of that time. Around a half century after he first moved in, died here at his home in 1934, at the age of 93, only a few years before the first photo was taken. The house remained in the family afterwards, and during the 1940 census his daughter Madeline was still living here. However, it was subsequently sold, and the house that had once been the mansion of a Gilded Age capitalist was covered in cheap asphalt siding and converted into a rooming house. It was heavily damaged by a fire in the early 1980s, and was nearly demolished. However, it was restored instead, and today it is virtually indistinguishable from its appearance when the Rood family lived here some 80 years earlier. Along with the rest of the neighborhood, it is part of the McKnight Historic District on the National Register of Historic Places.