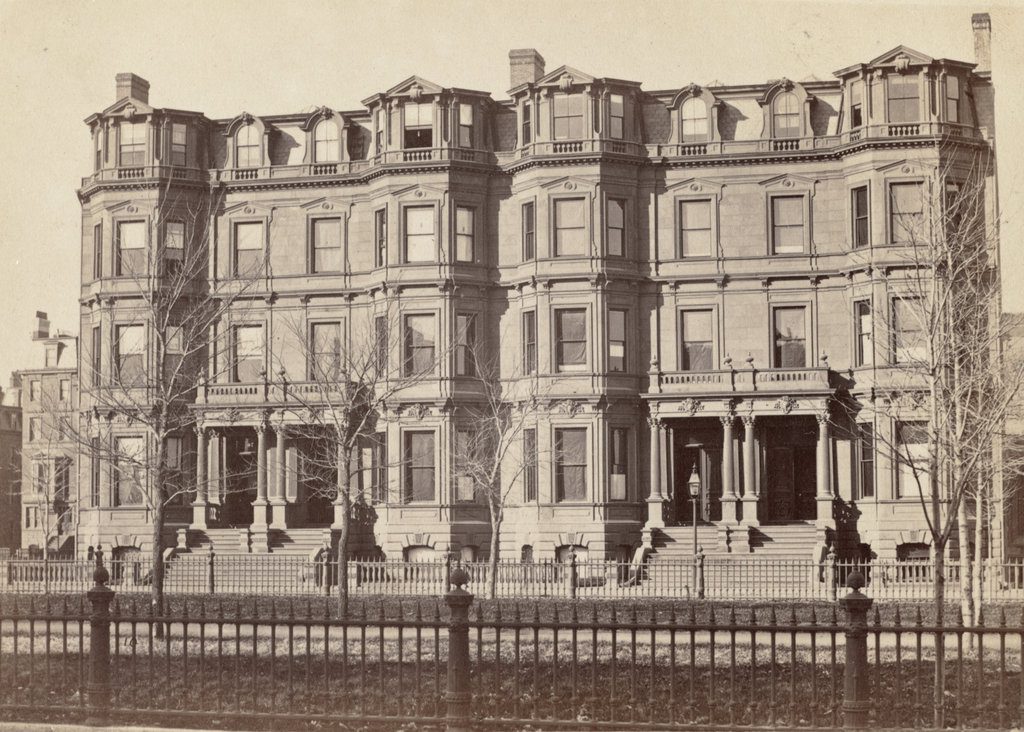 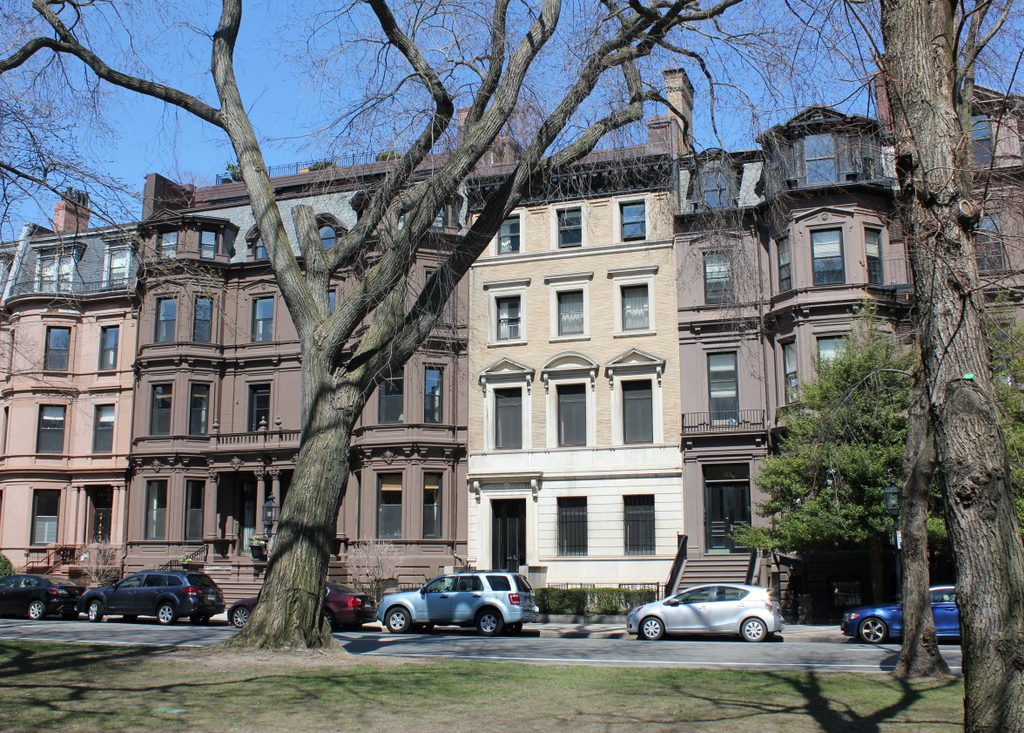 In the mid-19th century, Boston was geographically small and very crowded, with very little undeveloped land. The population was continuing to grow, however, leading the city to embark on an ambitious civil engineering plan to fill in the Back Bay, a badly polluted tidal marsh along the Charles River. The project began in the late 1850s, and within a decade the neighborhood was already well on its way to becoming one of the city’s most exclusive residential areas.

Commonwealth Avenue, with its broad, tree-lined mall, was intended to be a centerpiece of the development, and house lots on the sunny north side were considered particularly desirable. This spot here, partway between Berkeley and Clarendon Streets, was purchased in 1869 by Elijah C. Drew, a merchant and president of the Eleventh Ward National Bank. Here, he built two identical pairs of symmetrical houses, with a Second Empire-style design that matched most of the other homes in the area.

Upon completion around 1869, Drew moved into the house at 41 Commonwealth Avenue, on the far right side, but he sold the other three homes. House number 43, second from the right, was sold to William T. Andrews, who purchased it for his daughter Elizabeth and her husband, John T. Clark. John was a partner in the crockery firm of Clark, Adams, and Clark, and he also served as chairman of the city’s Board of Aldermen. The house to the left, number 45, was sold to Elmer Townsend, a businessman who owned the New England Wax Thread Sewing Machine Company, and last house on the left, number 47, was also sold to a businessman, dry goods merchant Henry Blaney and his wife Mary.

None of the original families in these homes lived here for very long, and by the end of the 1870s all four had been sold. Over the next few decades, the houses has a variety of other residents, and in 1902 the house at 43 Commonwealth was demolished and replaced with a new house, designed by architect Julius A. Schweinfurth for Ashton R. Willard. This broke up the symmetry of the original set of four houses, and it also created an interesting contrast between the dark brownstones of the Victorian era and the much lighter building materials of the Classical Revival era.

When the first photo was taken, the surrounding lots had not been developed yet. These homes would be built later in the 1870s, and very little has changed since then. Aside from the replacement of the house at 43 Commonwealth, the only other significant change in this scene is the fifth floor atop 45-47 Commonwealth. These two houses had been purchased in 1963 and combined into a single apartment building, and a fifth-floor penthouse was added, replacing the original mansard roof. However, the building was renovated again in 2008, restoring the roof and making the fifth floor almost unnoticeable from the street.

For more detailed historical information on these houses, see the Back Bay Houses website for 41, 43, and 45-47 Commonwealth.