The house at 123-125 Mulberry Street in Springfield, around 1938-1939. Image courtesy of the Springfield Preservation Trust. 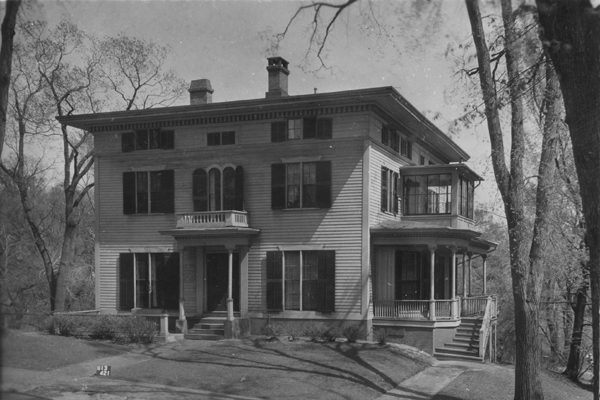 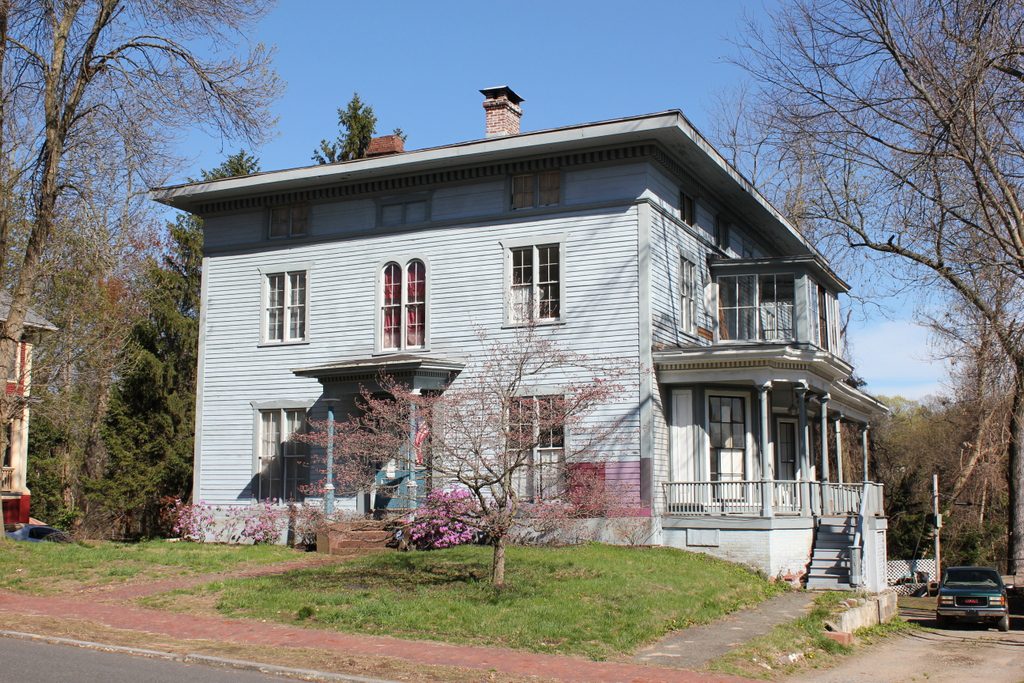 This fine Italianate home was built in 1853, and was the home of James H. Morton, a lawyer and judge on the city’s police court. He was born in Taunton in 1825, and was the son of Marcus Morton, a lawyer and judge who served in Congress, on the Massachusetts Supreme Judicial Court, and as governor of Massachusetts. James attended Brown and Harvard, and subsequently moved to Springfield, where he married his wife, Elizabeth W. Ashmun, in 1852. Her father was George Ashmun, a lawyer and politician who served three terms in Congress from 1845 to 1851, and he lived nearby at the corner of Mulberry and School Streets.

During the 1870 census, James and Elizabeth were living here with their five children, George, Elizabeth, Lucy, Charlotte, and Walter, and they also employed three live-in servants. James was a wealthy man at this point, with the census listing the value of his real estate as $105,000 (over $2 million today), and the value of his personal estate as $60,000 (over $1.1 million today). However, James died six years later, at the age of 51. His cause of death was listed as “congestion of the brain,” a somewhat vague 19th century term that could have included such conditions as meningitis, encephalitis, or a stroke, and was also sometimes used as a euphemism for deaths caused by alcoholism.

By 1880, Elizabeth was living here with four of her children, plus her niece, three boarders, and three servants. The house was far less crowded by the 1900 census, though, when Elizabeth was living here with her daughters Elizabeth and Lucy, along with a single servant. Soon after, the house was divided into a two-family home, with Elizabeth and her family living in one half and renting out the other half. Starting about 1904, this half was rented to Olin H. Smith, who was the president of E. O. Smith Company, a Springfield-based wholesale grocery.

Neither Elizabeth nor Lucy ever married, and Lucy lived here until her death in 1911 at the age of 51. Her mother Elizabeth died five years later, at the age of 86, after having outlived James by 40 years. Olin Smith also died in 1916, and by 1920 the younger Elizabeth was living here with a servant and a roomer. She continued to rent the second unit to a variety of tenants throughout the 1920s, and she was still living here as late as the 1929 city directory. However, by the 1930 census she was living in a boarding house on Union Street, and she died later that year.

In the meantime, by the 1930 census the other half of the house was being rented by Percy W. Long, a dictionary editor for G. & C. Merriam. A Harvard graduate, Long had also served as secretary of the American Dialect Society, and during his time in Springfield he was one of the editors for the second edition of Webster’s International Dictionary. He and his wife Florence lived here in this house for several years, but they moved to New York in the mid-1930s, where he worked as an English professor at New York University and served as the executive director of the Modern Language Association, a position he held from 1935 to 1947.

By the time the first photo was taken in the late 1930s, the house was owned by William B. Remington, who moved into the house around 1933, along with his wife Helen and their son William. Originally from the Rochester area, Remington entered the advertising business, and worked for a number of different companies before coming to Springfield in 1925 as a partner in the J. B. Bates Advertising Agency. Two years later, he started his own advertising firm, William B. Remington, Inc., and was working as the company’s president and treasurer when he moved into this house.

Helen Remington died in 1938, right around the time that the first photo was probably taken, and the following year William remarried to Margaret L. Brown. During the 1940 census, Margaret was working as a copywriter for William’s company, and she was earning $4,000 a year, which was a considerable sum at the time, equal to over $70,000 today. William’s income was listed as $5,000+, which was the highest bracket on the census, and was equal to over $88,000 today.

The Remingtons lived in this house until the early 1940s, but around 1943 they moved to a nearby house on Ridgewood Place. Since then, this house on Mulberry Street has remained well-preserved. The interior is now divided into three units, but the exterior looks essentially the same as it did in the 1930s, aside from the missing shutters and the balustrade above the front porch. Alogn with the rest of the neighborhood, it is now part of the city’s Ridgewood Local Historic District.