Looking north on Crescent Hill, from near the corner of Pine Street in Springfield, around 1892. Image from Picturesque Hampden (1892). 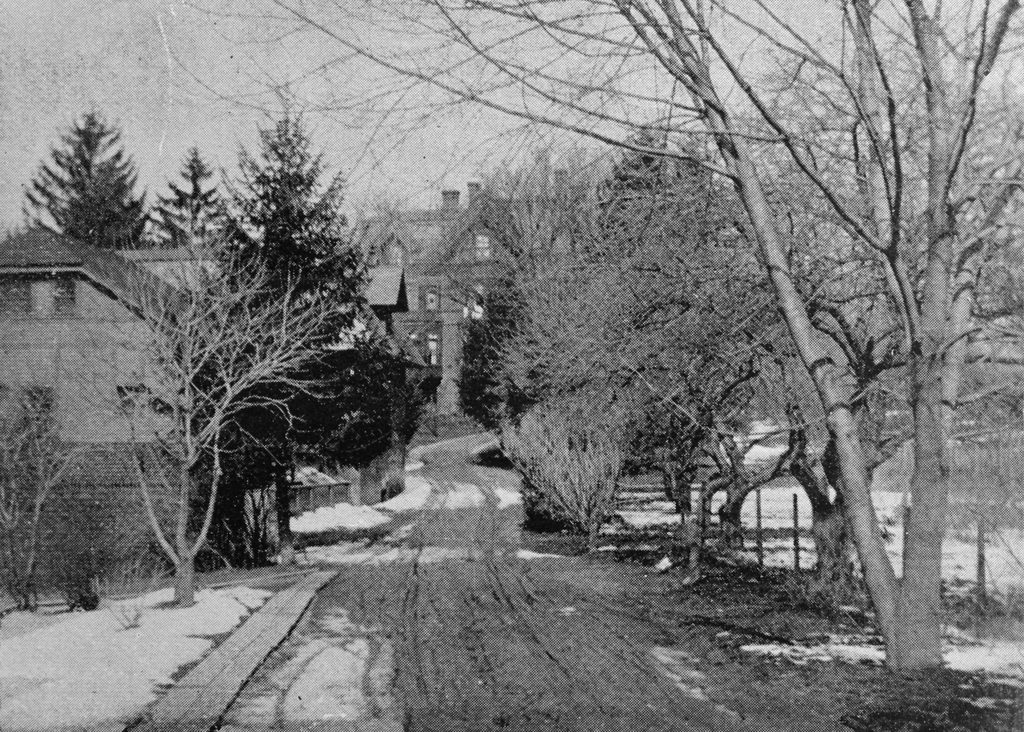 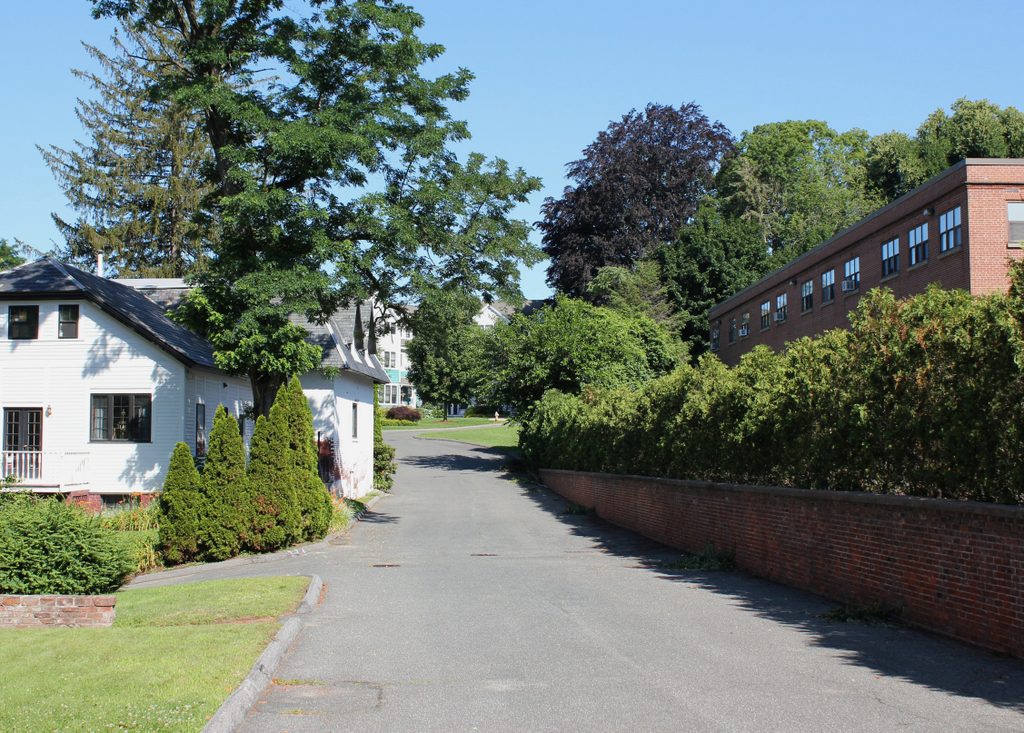 Crescent Hill is, as its name suggests, a curved ridgeline just to the southeast of downtown Springfield, near the corner of Maple and Pine Streets. Today, the area consists of several historic houses on two discontinuous streets named Crescent Hill, but it was originally developed in the second half of the 19th century as one of the city’s most desirable residential areas. The first house here was the Mills-Stebbins Villa, which was completed in 1851, and by the time the first photo was taken Crescent Hill consisted of seven large houses, all of which were connected by a network of paths such as this one.

The first view shows one of these houses, which is visible in the distance at the end of the road. Both it and the carriage house, which is seen on the left side of the photo, were completed in 1865, and were designed by the prominent New York architect Calvert Vaux. It was one of the finest homes ever built in Springfield, and enjoyed views overlooking the city and surrounding countryside from the top of the hill. Shortly after its completion, the house was mentioned in the 1866-1867 city directory, which gave the following description:

It stands on a sight which commands one of the finest outlooks on the Connecticut Valley, and the genius of its architect has let it every exterior grace and interior comfort to correspond with the beauty and quiet of of its location. The house is of brick, red mortar being used, with wooden cornices painted and sanded in the same color as Nova Scotia stone. The outside trimmings are elegantly moulded in graceful designs. The porch is inlaid with bay, butternut, and pine, unpainted. There is no paint in the interior of the house, but each compartment is finished with an ingenious arrangement of contrasted woods; as, for instance, mahogany is the prevailing wood in the library, black walnut and red cedar in the parlor and dining-room, butternut in the hall, kitchen and pantries. All the upper chambers are finished in black walnut and butternut. There are some exquisite frescoes to add to the charm of the interior, done in taste by Mohr of New York. The plans were designed by Vaux of New York. C. S. Ferry of this city did the wood-work, and R. Harrington the masonry. The building was commenced in the summer of 1864, and completed in September, 1865.

The original owner of this house was George E. Howard, an industrialist who was a partner in Howard & Bros., a firm that, according to the 1872 city directory, sold railroad and car builders’ supplies. However, the company later specialized in cotton waste, and by the late 19th century Howard was the president and treasurer of the Springfield Waste Company, which also dealt in cotton waste.

George Howard moved into this house with his wife Elizabeth, but she died of tuberculosis in 1869, at the age of 39. By the following year, George was living here alone in this house except for two servants, and the census listed his real estate value at $50,000, plus a personal estate valued at $100,000, for a total net worth of nearly $3 million in today’s dollars. He remarried in 1877, to Alice S. Graves. At 24 years old, she was less than half the age of the 52-year-old George Howard, and they had two children, George and Anna.

The Howard family lived here until the late 1880s, when they moved to a house nearby at 165 Mill Street. Their house here on Crescent Hill was later purchased by H. Curtis Rowley, the treasurer of the dictionary publishing company G. & C. Merriam. Rowley’s wife, Thirza J. Merriam, was the daughter of company president Homer Merriam, and her uncles, George and Charles, had been the original founders of the company. The Rowleys moved into this house around 1893, and by the 1900 census they were living here with their two sons, Harold and Arthur, plus H. Curtis Rowley’s sister Harriet and two servants.

At some point, either before or during the Rowley’s ownership, the house was named Wyndhurst. They purchased the property about the same time that the first photo was taken, and several years later they hosted president William McKinley, who visited the house with his wife Ida in 1899. Although more than 30 years old at this point, the 23-room mansion was still among the finest in the city, and the Rowleys continued to live here until around 1917, when they moved to a comparatively modest house at 24 Oxford Street.

In 1917 the Rowleys sold Wyndhurst to Alfred H. Chapin, the president and treasurer of the Moore Drop Forge Company. Chapin subsequently demolished the house and built a new, even larger house on the property. However, this house did not last for very long, ultimately falling victim to the Great Depression. It was demolished around 1940, and the site was vacant for many years, until it was finally redeveloped in the late 1980s with a condominium building. Named the Wyndhurst Condominiums, it is barely visible in the distance of the present-day photo. Also visible in the photo is the original 1860s Wyndhurst carriage house, which still stands on the left side of the scene. The only remaining feature from the first photo, survived the demolition of both houses on the property, and it has since been converted into a single-family residence.