The Civil War monument and bandstand on the town common in Brattleboro, around 1905. Image courtesy of the Library of Congress, Detroit Publishing Company Collection. 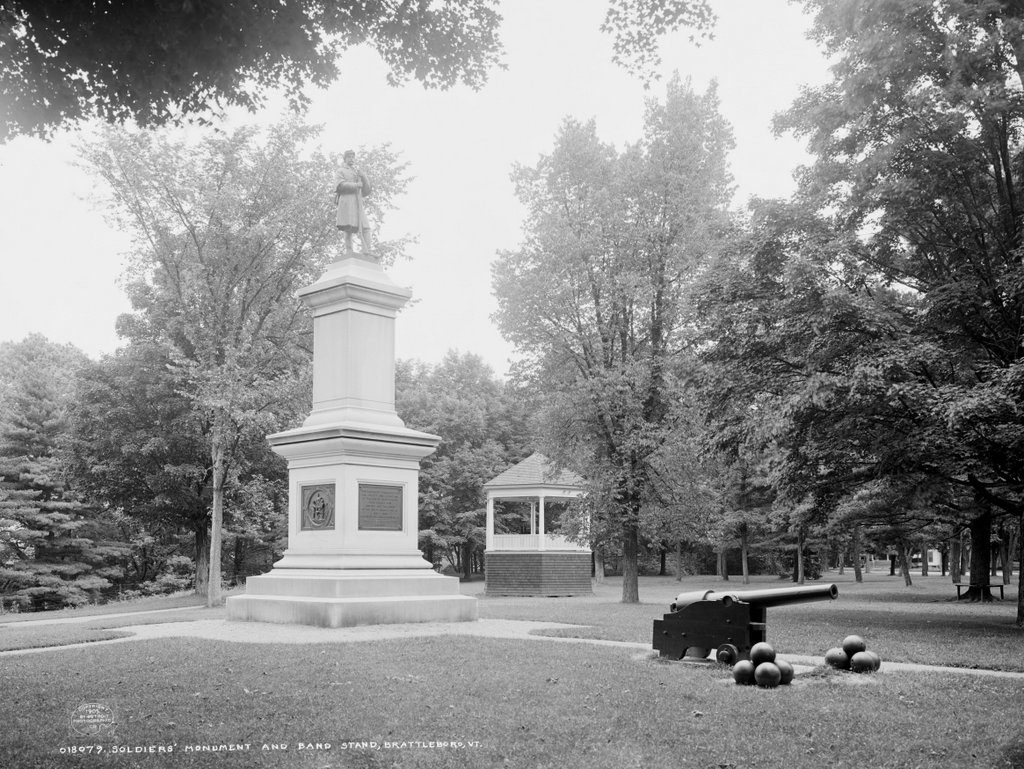 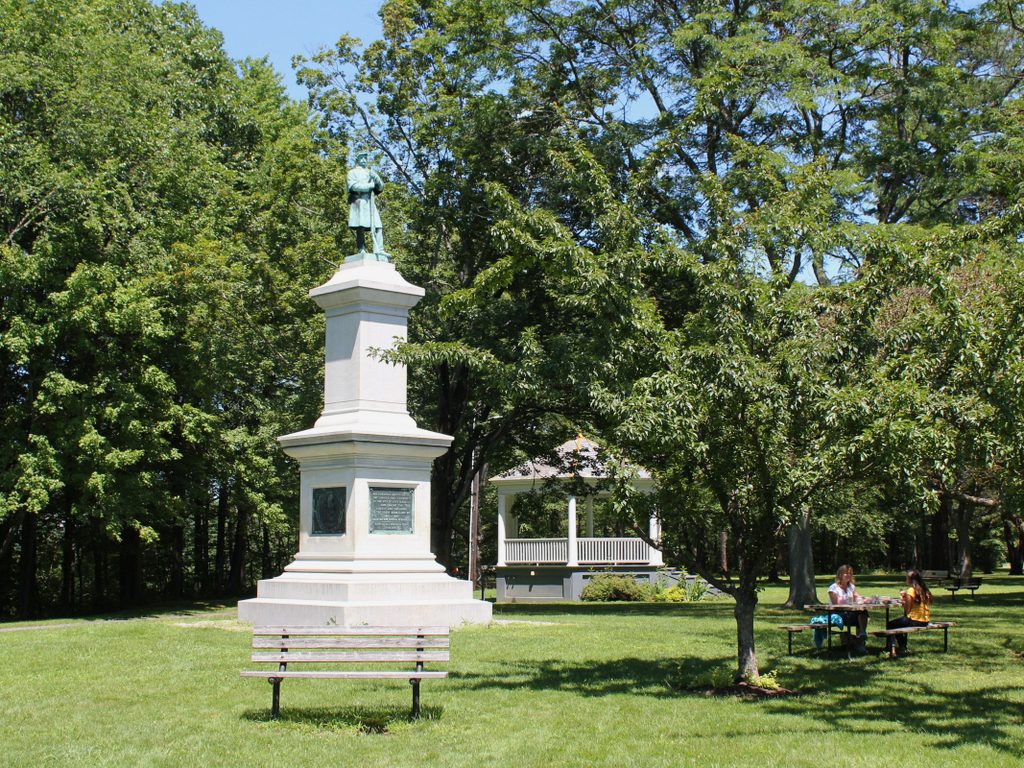 Civil War monuments are a near-ubiquitous feature of almost every town common across the country, and Brattleboro is no exception. Dedicated in 1887, the Brattleboro Soldiers’ Monument has a granite base, with bronze plaques on all four sides and an eight-foot-tall bronze infantryman on top. As indicated on one of the plaques, the monument was to commemorate “the loyalty and patriotism of the men of Brattleboro, who fought for liberty and the union in the great rebellion of 1861-1865.” According to the plaque, the town had a total of 381 residents who served in the war, 31 of whom died.

The monument was built at a cost of $6,000, and the June 17, 1887 dedication ceremony drew a number of dignitaries here to the common. It was presided over by Frederick Holbrook, a Brattleboro native who served as governor for the first two years of the war, and whose father once lived in a house across the street from the common. The dedication speech was given by James R. Tanner, a Civil War veteran who had lost both of his legs at the Second Battle of Bull Run. Tanner was the stenographer who had been summoned to Abraham Lincoln’s deathbed in order to record eyewitness testimonies from the assassination, and he later went on to become Commander-in-Chief of the Grand Army of the Republic, serving from 1905 to 1906. Aside from Holbrook and Tanner, other dignitaries included Governor Ebenezer J. Ormsbee, and Brattleboro resident Colonel George W. Hooker, who was later awarded the Medal of Honor for single-handedly capturing 116 Confederate soldiers during the Battle of Crampton’s Gap in 1862.

The dedication ceremony drew about 5,000 people to the common, but an even larger crowd – estimated at 8,000 – gathered here on September 1, 1902, when Theodore Roosevelt gave a speech during a presidential tour of Vermont. This took place only a few years before the first photo was taken, and Roosevelt spoke from the bandstand in the center of the photo, just to the right of the monument. The president was accompanied by a number of notable Vermonters, including Frederick Holbrook, then-Governor William W. Stickney, federal judge Hoyt H. Wheeler, and U.S. Attorney James L. Martin, whom Roosevelt would later appoint as Wheeler’s successor on the bench. Roosevelt was escorted here from the train station, spoke from the bandstand for about 15 minutes, and was presented with a bouquet of roses. He was then escorted back to the station, and from there he traveled south across the border to Northfield, Massachusetts, where he spent the night at the Northfield Hotel.

Today, more than a century after the first photo was taken, this scene has not significantly changed. The old bandstand was evidently replaced at some point, and a different gazebo now stands on the site. Along with this, the cannon and shot are now gone, and its approximate location is now a picnic table. Otherwise, though, this site continues to be used as the town common, and the Soldiers’ Monument still stands here, now accompanied by a second memorial to the Brattleboro residents who were killed in World War I, World War II, the Korean War, and the Vietnam War.