The Ropes Mansion at 318 Essex Street in Salem, on November 26, 1940. Image courtesy of the Library of Congress, Historic American Buildings Survey Collection. 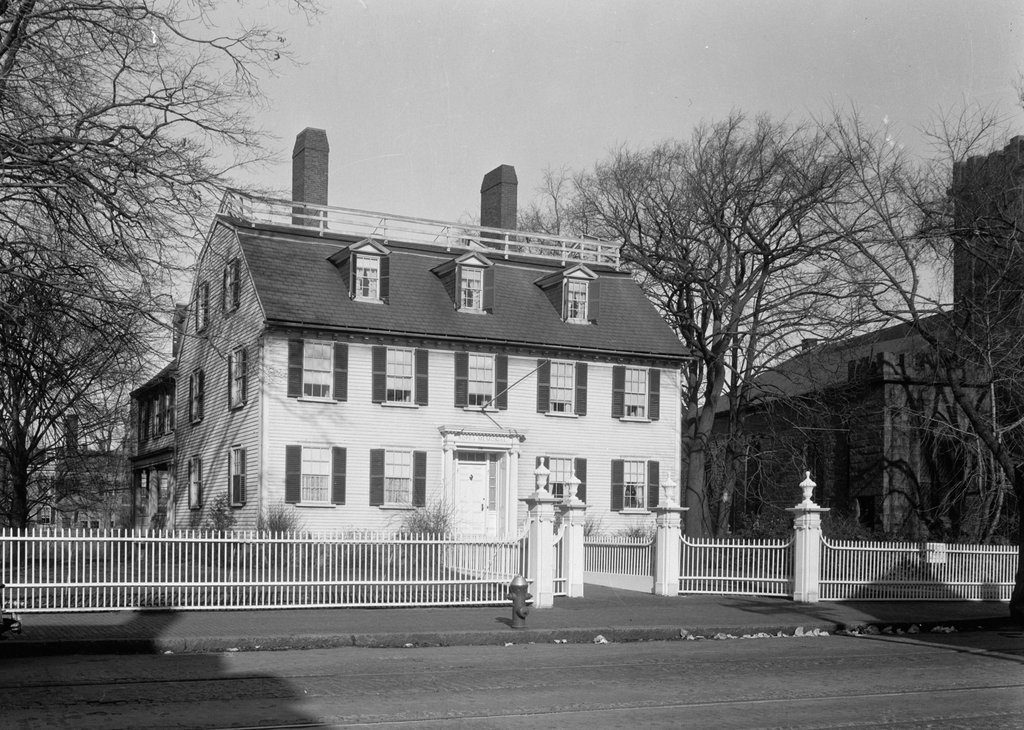 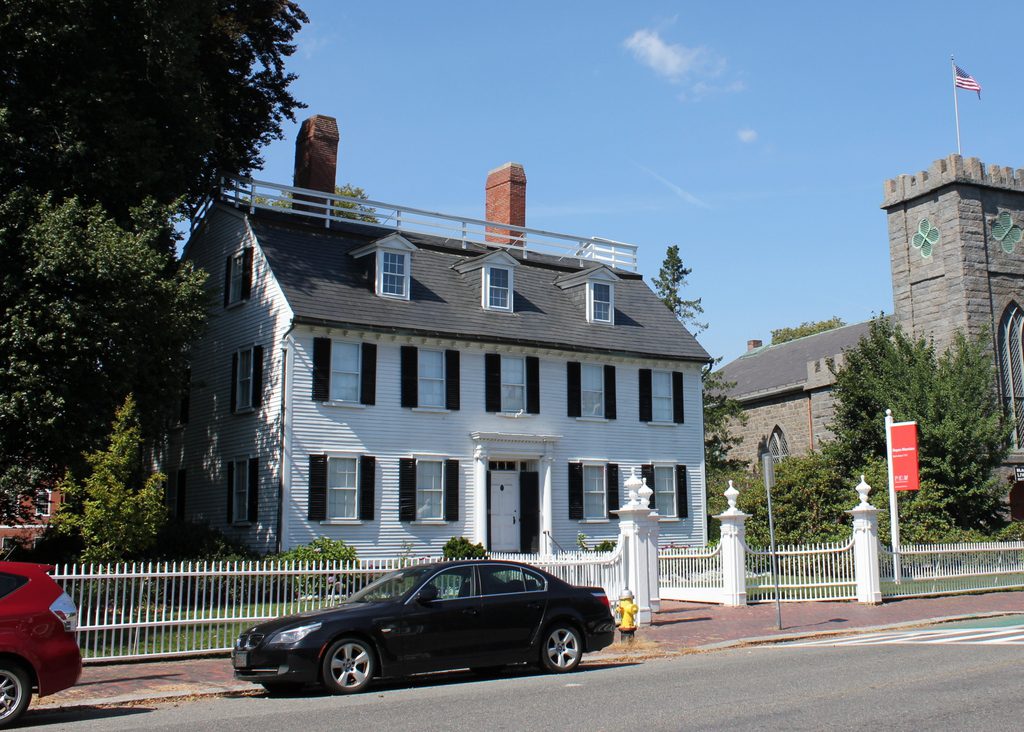 This house was built sometime in the late 1720s, and was originally the home of Samuel Barnard (1684-1762), a merchant who had moved to Salem from Deerfield, Massachusetts. He was a survivor of the 1704 Indian raid on Deerfield, and he lived there until after the death of his wife Mary and their infant son Samuel in 1720. He subsequently came to Salem and married his second wife Rachel, the widow of his cousin Thomas Barnard. Here, he propspered as a merchant and became a wealthy man, as demonstrated by the elegant Georgian mansion that he built within a few years of his arrival.

Rachel died in 1743, and he later remarried to Elizabeth Williams, who died in 1753. Three years later he married his fourth wife, Catharine Dexter, and they lived here until his death in 1762. With no surviving heirs from any of his marriages, Barnard left a considerable amount of money for charitable purposes, including a hundred pounds for the relief of the poor in Salem and Deerfield, and two hundred pounds to purchase silver for the churches in Salem, Deerfield, and Greenfield. Among these gifts was a silver tankard, now in the collections of Historic Deerfield, that was made by the young Boston silversmith Paul Revere.

Barnard left his property in Salem, including this house, to his nephew, Joseph Barnard. In 1768, Joseph sold the house to Judge Nathaniel Ropes (1726-1774) for eight hundred pounds. At the time, the property extended beyond the house as far as the banks of the North River, since Federal Street has not yet been opened a block to the north of here. Ropes was a 1745 graduate of Harvard, and began his career as a lawyer. He represented Salem in the colonial legislature in 1760 and 1761, and served on the Governor’s Council from 1762 to 1768. He was also a judge on the Inferior Court of Common Pleas and a judge of probate, and in 1772 Governor Thomas Hutchinson appointed him as a justice on the Superior Court of Judicature, the highest court in the colony.

Ropes’s short tenure as an associate justice on the court was marked by a significant controversy over how judges were paid. Although appointed by the royal governor of the colony, the judges were, until this point, paid by the elected representatives of the General Court. Because these royal judges were effectively at the mercy of the colonists, the British proposed paying them directly, through the already-unpopular colonial taxes. This action further outraged Massachusetts patriots, who feared that the judges would become partial to the Crown over colonial interests. However, there was significant pressure on these judges to not accept their royal salaries, and in 1773 the lower house of the General Court gave a clear warning to Ropes and the other Superior Court justices, with a resolution stating that:

any one of them who shall accept of, and depend upon the Pleasure of the Crown for his Support, independent of the Grants and Acts of the General Assembly, will discover to the World that he has not a due Sense of the Importance of an Impartial Administration of Justice, that he is an enemy to the Constitution, and has it in his Heart to promote the Establishment of an arbitrary Government in the Province.

Nathaniel Ropes promised that he would not accept the royal salary, and he was even acquainted with prominent patriots such as John Adams, who visited this house on November 9, 1771. The future president commented on the visit in his diary, writing:

Dined this Day, spent the Afternoon, and drank Tea at Judge Ropes’s, with Judges Lynde, Oliver and Hutchinson, Sewal, Putnam, and Winthrop. Mrs. Ropes is a fine Woman — very pretty, and genteel. Our Judge Oliver is the best bred Gentleman of all the judges, by far. There is something in every one of the others indecent and disagreable, at Times in Company-affected Witticisms, unpolished fleers, coarse Jests, and sometimes rough, rude Attacks, but these you dont see escape Judge Oliver.

This meeting here at the Ropes house included some of the most prominent jurists in the colony at the time. Along with Ropes himself, both Benjamin Lynde, Jr. and Peter Oliver were justices of the Superior Court, and the Hutchinson mentioned in the entry is likely Foster Hutchinson, who also served on the court. Lynde was the chief justice at the time, but the following year he was succeeded by Oliver, who was later forced out once the Revolution started. Coincidentally, Oliver’s replacement as chief justice was none other than John Adams himself, although he never actually sat on the court and eventually resigned after holding the position from 1775 to 1776.

In the meantime, as the colony moved closer to revolution, Ropes faced problems right here at his home in Salem. Although he had refused his royal salary, he nonetheless held Loyalist views, and his position as a high-ranking judge made him a symbol of British power in the colony. According to tradition, in March 1774 an angry mob attacked the house, throwing mud, sticks, and rocks at the windows and calling for Ropes to renounce his allegiance to the Crown. However, at the time Ropes was in his bed, gravely ill with smallpox, and he died the following day, with the stress from the mob supposedly being a contributing factor in his death.

Writing in his diary a little over a week later, John Adams made no mention of a specific mob attacking the house, but did comment on how the turmoil in the colony had affected Ropes’s health:

Pynchon says judge Ropes was exceedingly agitated all the time of his last Sickness — about the public Affairs, in general, and those of the Superiour Court in particular — afraid his Renunciation would be attributed to Timidity — afraid to refuse to renounce — worried about the Opinion of the Bar, &c.

Nathaniel Ropes was only 47 when he died, leaving his widow Priscilla and six young children, whose ages ranged from one to 14. She and the children moved to nearby Danvers for some time, but after a few years their oldest son, Nathaniel Ropes III (1759-1806), returned to this house and began a merchant business here in Salem. He and his wife Sarah had three children who survived infancy, including a son, Nathaniel Ropes IV (1793-1885), and two daughters, Sarah (Sally) and Abigail. The elder Sarah died in 1801, at the age of 36, and two years later Nathaniel remarried, to Elizabeth Cleveland. However, he died in 1806, at the same age as his father’s untimely death.

Nathaniel Ropes IV would later move to Cincinnati, where he lived for the rest of his life, but his sisters Sally and Abigail continued to live here in the family home. In 1817, Sally married Joseph Orne, whose father, William Orne, was a prosperous merchant. They had a daughter, Elizabeth, who was born in 1818, but Joseph died later in the year, at the age of just 22. Like so many other members of the family, Abigail Ropes also died relatively young in 1839, and Elizabeth died three years later, at the age of 24.

After having outlived her husband, daughter, parents, and sister, the middle-aged Sally remained here in this house for many years. The 1850 census shows her living here alone except for two women who were presumably servants. By the 1870 census, she was 75 years old and employed a live-in nurse and a servant, and she also lived here with her nephew, 37-year-old Nathaniel Ropes V. Although born in Ohio, Nathaniel had later returned to his father’s childhood home here in Salem, and continued living in the house after Sally’s death in 1876.

Nathaniel died in 1893, and the house was then acquired by his sisters. The following year, it underwent renovations. It was moved back from the street, and was modernized with conveniences such as central heat, electricity, and plumbing. A large wing was also built in the rear of the house, the fence was added to the front yard, and some of the interior was also renovated. The three sisters went on to live here for the rest of their lives. The oldest, Sarah, died in 1899, followed by Mary in 1903 and Eliza in 1907. Unmarried, and with no surviving nieces or nephews, Mary and Eliza were the last of their branch of the Ropes family, and after their deaths they left the property to the Essex Institute, as a memorial to their family.

The first photo was taken a few decades later, as part of the New Deal-era Historic American Buildings Survey. The house has not seen any significant changes since then, and it is now owned by the Peabody Essex Museum, which acquired the property following the 1992 merger between the Peabody Museum of Salem and the Essex Institute. A year later, the exterior of the house appeared in the Disney film Hocus Pocus, where it served as the home of one of the main characters. Today, the house is still open to the public as a museum, and is one of many historic properties owned by the Peabody Essex.